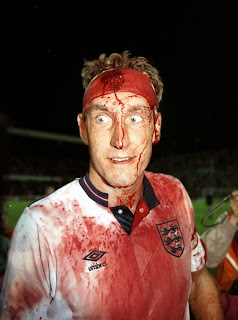 It’s Friday evening and I’m grooming myself for a night out in town. There’s a guest appearance from Mrs P. We’ve booked a table at The Living Room on High Pavement, in Nottingham. It’s just the two of us – Sticky jnr is dossing outside Budgens, whilst ‘The Skipper’ is on a German exchange trip.

After a pleasant meal, with good service, we meet up with a few work colleagues at the soulless Baa Bar pub chain on Goosegate. The only toon of note to report on folks is ‘Gravel Pit’ by the Wu-Tang Clan.

We’re back home by 10pm, I can’t do late ones anymore. The landline is ringing out. A friend has called to say Sticky jnr has fallen off a park bench and cut his head open. He walks through the door five minutes later. His head is swathed in bandages. He looks like former England captain and Ipswich Town defender Terry Butcher.

I have to give ‘Terry Butcher’ a dig out with the papers in the morning. Mrs P is on a cleaning frenzy when I get back. Murphy Palmer (budgie) is in trouble again, he’s spat apple all over the cream carpet. I have a quick word with Finley the rabbit; he’s predicting a 2-1 win for Dunston. (Sorry Terry and Daisy). 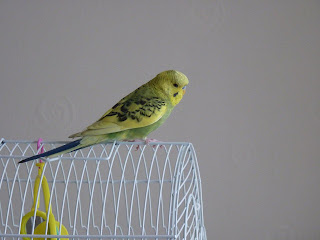 I need to be in good books as I’ve a long day ahead. Sticky Palms Cleaning Services are required in the bathroom, the rabbit cage and budgie cage. I wolf down a sausage sandwich before heading out to Hucknall to hook up with Notts County’s Head of Youth, Mick Leonard. Peppa Pig is waving at me from outside a children’s nursery on Station Road in Plumtree, as I drive by.

Danny Baker is on Five Live. His show was hilarious last week. The special guest was James Alexander Gordon, who reads out the classified football scores at 5pm on Sports Report each Saturday tea-time. Baker persuades him to read the results out from 100 years ago to the day, from the old Division Two. There are classic old names such as: Glossop North End, Gainsborough Trinity and Leicester Fosse.

We have a wander around Hucknall Rolls Royce Leisure’s superb complex. There are an abundance of games being played, with ages ranging from under 7s through to under 12s. We notice a young referee in tears; apparently he has been verbally abused by a so-called coach. It disgusts me. I see more and more of this each week. The RESPECT campaign doesn’t appear to be working. I have a cup of tea and a Chunky Kit Kat before heading back home. 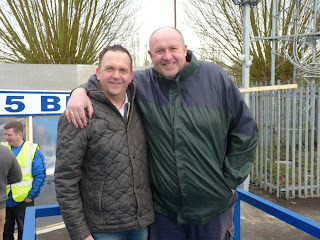 Five Live are talking-up an interview with the luckiest man in football - old moon face - (David Platt) at 2pm. I’d thoroughly recommend that folk take a siesta during this dull radio moment.

White Van Man arrives at 1.10pm. The wind-up merchant has Heart 106FM on. Toni Braxton’s ‘Unbreak My Heart’ is blaring out the car speakers. We’re going to leave WVM’s car at Big D’s house in Bramcote.

WVM is fresh from a weekend in Brussels. He complains it was 10 Euros for a Leffe shandy. Big D is sweating over a hot stove when we arrive. He’s preparing the final ingredients for a Beef Dopiaza curry. He’s full of drunken tales from his recent golfing holiday in Northumberland. 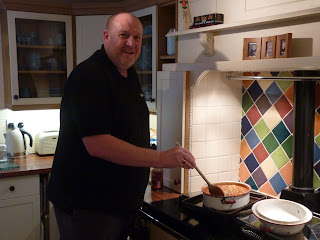 We exit the motorway at Junction 29A and drive through the old south Derbyshire coalfields. Big D parks his 4x4 smack outside the Inkersall Road front doors. It’s £5 on the gate and £1.50 for a superb programme. We immediately bump into Staveley’s biggest fan, Daisy Bruce, who has been roped-in to sell raffle tickets.

Staveley is a town within the borough of Chesterfield in Derbyshire. It is situated alongside the River Rother and has a population of over 15,000. It is a well known former mining area. The Staveley foundry and chemicals works formed an important part of the town’s history. Rock and roll and jazz guitarist Chris Spedding was born in Staveley. He had a Top Twenty hit in 1975 called ‘Motor Bikin.’ 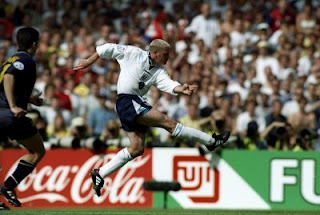 Dunston is in the Metropolitan Borough of Gateshead, in the county of Tyne and Wear. Mrs P’s favourite shopping complex, the MetroCentre, is close by. Dunston’s most famous son is Paul Gascoigne. A stand is named after Gazza at their UTS Stadium. AC/DC lead singer Brian Johnson is also from the area.

Big D slopes off to buy a pie, while WVM shouts up a can of Stella and a coke in a packed clubhouse. Sheffield Wednesday are beating an out-of-form Preston North End 2-0. I get talking to a lady in the bar who turns out to be a QPR season ticket holder. She talks excitedly about their recent 3-2 win over ‘King Kenny’s’ Liverpool.

I’m back outside as the atmosphere begins to build. Dunston are one to the good from the first leg. The ultimate prize is a day out at Wembley. We bump into Staveley Chairman Terry Damms. He‘s as busy as a beaver but never looks flustered. He’s climbing up to the gantry at the newly erected Tower to take photos and film the game. 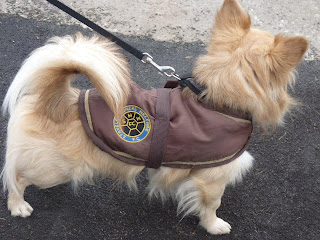 We’re stood on the opposite side of the ground, at the top of some concrete steps. It’s another new feature of this charming ground. A marquee has been erected to cater for the FA and League big wigs.

The game sets off at a fair old pace. It’s not the “cat and mouse” affair of the previous week. The tie is all square after five minutes, with ex Matlock striker Simon Barraclough smashing home a shot following a fine three man move.

Dunston are soon 2-1 up on aggregate. A cross from the left is knocked back by Michael Dixon for top scorer Andrew Bulford to skilfully steer his shot into the net. He races to celebrate with the travelling contingent and is yellow-carded for his sins. He pays the price moments later for a shocking challenge in the middle of the park. Dunston are down to ten men. 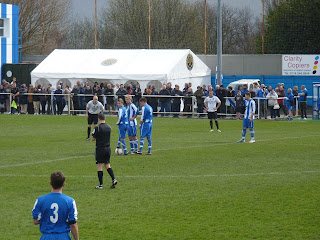 Staveley seize the initiative and gain in confidence. They begin to pepper the visitors’ goal. The influential Chris Coy restores their lead to put the tie at 2-2 on aggregate. We all draw for breath at half-time after 45 minutes of high drama and tension. Big D and WVM decline a further visit to the pie stall.

A quick check on Twitter reveals that Lincoln City are turning over Tamworth. I’m surprised by that having watched the Staffordshire side more than match Grimsby Town last Wednesday evening.

Dunston emerge for the second half with their sleeves rolled up. They have what I would call some ‘proper blokes’ in their side. I’ve been disappointed with some of the chanting from a minority of their supporters behind the Staveley goal. Is “We are the Staveley haters” and “You fat b****rd” (aimed at Ian Deakin the Staveley ‘keeper) really necessary? “The referee’s a Mackem” is far more amusing. 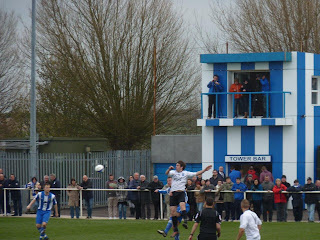 The away support have congregated on the terrace outside No.15 Bar Cafe. The sun is shining and the sky is sea blue. Dunston dominate the second half. Their left winger Lee McAndrew is skinning the Staveley full back for fun. Fortune is on their side when Barraclough is sent off for an elbow on the Dunston centre half. Connell, the visiting ‘keeper, is a lucky lad, when appearing to throw his head at a Staveley forward.

The inevitable winning goal comes in the 84th minute. A ball is played in from the left, it takes an eternity to reach substitute Stephen Goddard, bouncing five or six times, before he rifles a shot in off the underside of the crossbar and into the roof of the net. We witness wild scenes of joys from the noisy away following.

WVM is also doing a little jig of joy, with news from Selhurst Park of a Raddy Majewski hat-trick. Sticky Palms is cheered that Lincoln are thumping Tamworth 4-0. 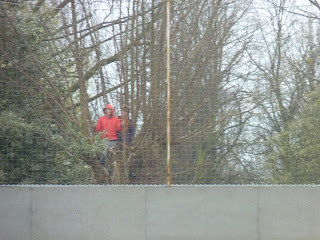 The tank has run empty for Staveley. The dream is over. They’ve tried 4-3-3 and 4-4-2. Referee Dean Mohareb shows a remarkable turn of foot as he dashes down the tunnel following his final blow of the whistle. With seven bookings and two red cards to deal with, it will take him an hour to complete the paperwork.

There’s been a bit of a kerfuffle outside the Clubhouse door. The Feds, with sirens blazing, screech into the Club car park as the Dunston supporters become over exuberant.

I can’t bear to face Terry or Daisy; they’ll be hurt in their eyes. There time will come; maybe next year.

Men of the Match: Lee McAndrew, Dunston and Chris Fawcus, Staveley.
Posted by Sticky at 10:19 AM

Get the dog picture sent into here Sticky!! http://nonleaguedogs.tumblr.com/

That player in the picture looked like he was bathed in blood like he was took out from a soccer terror movie.

Excellent, what a website it is! This web site gives valuable
data to us, keep it up.

Hi! I'm at work browsing your blog from my new apple iphone! Just wanted to say I love reading your blog and look forward to all your posts! Carry on the excellent work!