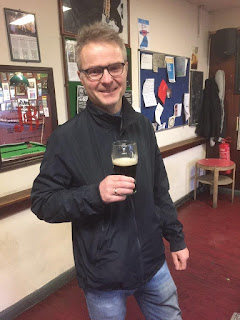 We head back up the A46 towards Nottingham after a lovely afternoon out at Lincoln City's Sincil Bank. Danny Cowley's Imps have won at a canter. We celebrate in the non-drinking capital of Nottingham, West Bridgford. A few looseners are necked at the 'World renowned Trent Bridge Inn.' A 'professional drinker' threatens to spark me out for jumping the queue - I remark that he's had more than enough, as we make a hasty exit.

The fur coat 'n no knicker brigade are out in full force on 'Bread 'n Lard Island. It's the poshest place in Notts with barely a decent pub in sight - the wonderful Stratford Haven is its saving grace. My Dad opened this pub, back in the day, for the owner of Tynemill, Chris Holmes. It took Chris five years to be granted a license for the 'Strat', which was previously a pet shop. Rushcliffe Borough Council are missing a trick. 'The Avenue' will be a pub graveyard in a few years time, unless they open their eyes. I quaff a couple of real ales in there, still reeling from the shock of stumping up £83 for two rounds of six in the pretentious Botanist on Bridgford Road (the artist formerly known as Fire 'n Ice another poncy pub).

I've only got one visit lined up with work this week, and that's only to Doncaster. I'll go stir crazy if I have to stay in the house. Big Dick Durrant comes to the rescue. He's the President of the Notts Senior League - it used to be 'the best league in the world.' His lad, Ross, ex NFFC, is in the nets for North Ferriby United, up in the East Riding of Yorkshire, for their Tuesday night Conference North clash with Curzon Ashton - a club who sold jinking winger, Steve Wigley, to Brian Clough's Nottingham Forest in 1981. 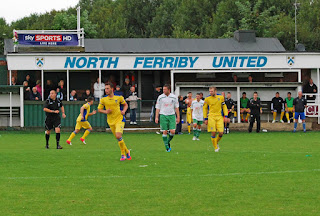 There's time for a superb pint of Wainwright in the Duke of Cumberland public-house before viewing the game. The moneyman has pulled the plug on Ferriby, and a new owner is in, who I'm introduced to. Ferriby can consider themselves to be unlucky, with a new-look and patched-up side putting on a brave performance. Ross is excellent in goal and should have no trouble pushing onto a Conference side next season. His handling is exemplary and distribution first-class.

It's Wednesday evening and the night of the office party. I'll be comfortably the oldest person there. I jump off the No.25 bus at the Southwell Road stop, and peg it up London Road, before turning right down Station Street. I've a new Castle Rock pub to tick off on Arkwright Street called the Barley Twist, which was previously an old sweet shop. I bump into a good mate who I haven't seen in ages - we worked together for close on 15 years.

I catch the Newark to Matlock train, alighting at the picture-postcard village of Attenborough, close to the nature reserve. It's a short walk up to the Village Hotel, in Chilwell, the venue for the party. It's not my scene and quite a tame affair. I'm tucked up in bed for 1am. 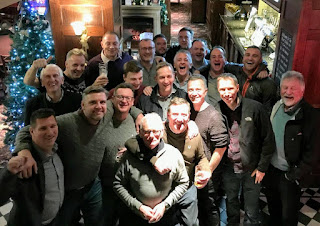 I've been kindly invited, on Friday afternoon, to the 31st edition of the Tollerton Air Hostess FC Christmas party. I've a few loose ends to tie up at work, so don't arrive in 'North Bridgford' until later in the afternoon. Some of the lads have already been 'on the sauce' for a few hours, but are looking rather glum as I swing open the door of the Brewhouse and Kitchen, situated on the banks of the River Trent. It transpires that one of the boys, only half an hour ago, administered CPR to a man who had collapsed outside The Embankment pub - tragically the guy didn't make it. The afternoon is tinged with sadness.

The Larwood and Voce pub on Fox Road, next to the cricket ground, is a major disappointment. Timothy Taylor Landlord and 'Rockin' Rudolph' beers are flat and rancid. 'Trevor Nelson' is on the decks and spinning Kool and the Gang, Shalamar and The Whispers - I remind the clown it's Christmas after another sharp exit.

'Our Joe' and his mates rock up in the Stratford Haven. I coached some of the lads at football until they were 16 years old. I love it, that they still take the time-out to make a fuss and have a chat. I hit the wall at 9pm, bowing out with a Doner kebab and DG cab home. 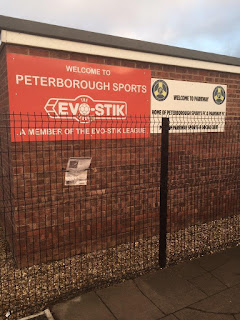 I'm as fresh as a daisy on Saturday morning. I brave Tesco in Carlton before leaving 'the Princess' with her runny nose and high temperature. I'm off to Peterborough to meet up with one of my best mates of over 40 years. A whinging Alan Green and insightful Leon Osman are commentating from Goodison Park as Everton and Chelsea meet in a lunchtime kick-off.

I see signs for the village of Scarrington, close to Bingham. Back in 1990, Roy Keane signed for Nottingham Forest from Cobh Ramblers, in Ireland, for a paltry fee. He ticked off more watering holes in Nottingham than blog legend Trumpy Bolton, often getting himself into more scrapes and rucks than Oliver Reed. My father had to fly out to Jersey to cover a story after a mid-winter break (remember them) involving Keane and a hotel waitress. Brian Clough told him to find a girl and settle down. He met a lass called Teresa from Bilborough, and took up Clough's advice, moving out into the sticks and residing in Scarrington, a dry village, near to Newark. He's still married to her to this day.

The A52 and A1 are as clear as a bell. Sat Nav navigates me into a tasty-looking housing estate. I can see the players warming up, but there's no access to the ground. Some youth is smoking a spliff in his front yard. I ask him directions to the ground. I might as well of asked my thick-as-a brick old budgie Murphy Palmer. 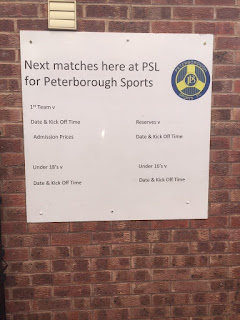 Peterborough is a cathedral city in east of England Cambridgeshire with a population of over 160,000. The River Nene flows through the city centre. It was designated a new town in 1967. The city is well known for Perkins engines, British Sugar, Indesit, Pearl Assurance and Thomas Cook. Famous people from the area include: actor Paul Nicholas, TV Presenter Jake Humphrey, Talksport gobshite Adrian Durham, Erasure lead singer Andy Bell and former Arsenal and Tottenham Hotspur midfielder David Bentley.

I stumble across the ground on the Lincoln Road and stick the car in a medical centre, to the rear of the stadium. My mate Ackers is propping up the bar, drinking a pint of mild (or a frothy Coke). It's a lovely old-fashioned clubhouse with plenty of memorabilia adorning the walls. The club i-Pod shuffle has a stuttering start with Cuban-born singer Gloria Estefan, but quickly rectifies itself with 'Alive and Kicking by Simple Minds.

It's £8 on the gate. I think they've sold out of programmes, but manage to buy a golden goal ticket. I saw the reverse fixture back in the autumn, as both teams cancelled each other out in a goaless draw. I like Sports' manager Jimmy Dean. I witnessed only one of two defeats last season, when they were beaten by a wonder-goal at Eynesbury Rovers - he was very sporting in defeat. 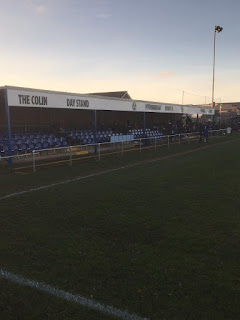 Lincoln United are the visitors. I like them very much, as they try to play an intricate game. You wouldn't mess around with their backroom staff, as they are the land of the giants.  One of their Management, Stuart Reddington, was signed from the Club by Chelsea when Gianluca Vialli was the manager.

We stand on the far side, exposed to the slight wind chill blowing in from the east. A dour first half with both teams poor in the final third livens up when defender Liam Marshall is red-carded for pulling back a Lincoln striker who is through on goal.

Lincoln start to pull the strings with creator supreme Rob Norris spraying the ball to all corners of the park. This can't be matched with the lack of firepower up front. We take advantage of the kind offer of mulled wine and a mince pie at half-time. 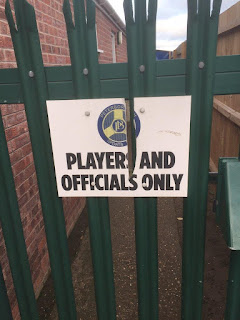 I mention to Forest diehard, Ackers, that 18-year-old hot property Ben Brereton has put the Tricky Trees 1-0 up at Deepdale in Preston - crikey at least they've seen a goal. Lincoln finally break the deadlock, and not before time. Jimmy Dean throws on his Christmas cracker, a Polish lad plucked from the District League. The return is instant. Much-travelled captain, Mark Jones, sensationally puts Sports 2-1 up from a torpedo long throw.

The Lincoln technical area, who have been chirpy, are lost for words and ideas. Sports spurn a glorious chance to put the game to bed with Jones aiming skew-wiff from close range. Lincoln throw the kitchen sink at it. Oliver nods home an equalizer before a last-ditch winner from Wightwick brings home the bacon for the visitors.

I'm gutted for Jimmy and the lads; they've given their all and played near three-quarters of the game with ten men. Their luck is down right now.

Man of the Match: Ashley Robinson