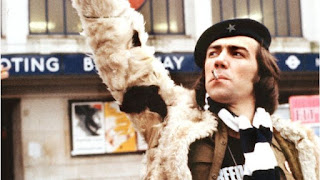 I'm piloting back down the A614 from Retford FC. I didn't think much to the game, but enjoyed Rob and Tony's company. The most exciting thing to happen all afternoon was for a couple of Virgin Trains to whizz by on the East Coast Line - proper Hoppers wet themselves when they see a choo choo train at football.

I've got 'Radio Red' on. They're live and exclusive at Portman Road, where Big Mick McCarthy's Tractor Boys are giving NFFC a pummelling. Commentator, Colin Fray, is saying through his Tricky Tree rose-tinted glasses that 'You Reds' have been unfortunate. Anybody at the Cardiff game would have seen it coming. I do like though, how Mark Warburton has stuck in a few kids from the endless conveyor belt of talent feeding in from the Academy. You'd never see 'King Billy' do that.

I'm back home for 5pm and showered, shaved and changed for early doors. We jump in a cab and head over the water to a J D Wetherspoon's 'professional drinking' watering hole called the Trent Bridge Inn. The cricketing theme continues, after visiting the birthplace of Notts legend Derek Randall this afternoon, tonight we're attending the Keyworth Cricket Club Christmas Party at the Long Room inside Notts CCC's pavilion - ironically the Derek Randall Suite is adjacent to this, where I had my wedding reception in 1993. 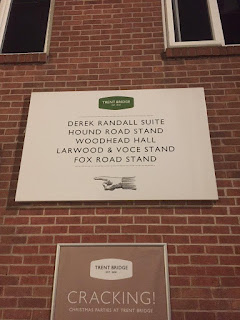 Keyworth Cricket Club is very dear and close to my heart. More importantly, it's on the up, due to a dedicated committee and huge army of volunteers. The Mayor of London and his 'Team' can be very proud of where we sit right now. It's good to catch up with folk that I've not seen in a while. The meal is distinctly average, but the drinks flow all evening. My close friend, Rob Baker, hosts a hilarious game of 'Irish Bingo.' I'm dog tired and Ms Moon is recovering from her long haul journey back from Johannesburg - we turn in before twelve bells.

I treat Ms Moon to a surprise lunch out in the Vale of Belvoir at the Staunton Arms, in Staunton in-the-Vale, on Sunday. I have a pint of Bass real ale that can only be rivalled by the Wysall Plough. It's Tuesday evening and deja vu. I flash my season ticket at the chip shop assistant at the Plains Fish Bar on Mapperley Tops - mini fish 'n chips is a steal at £3.50. Sat Nav takes me up the A60 and through Forest Town and its spectacular Christmas lights display that line the main drag.

I pay £5 on the gate for Clipstone FC v Gedling Miners Welfare in the Notts Senior Cup. I hook up with Tony Hay, one of my favourite characters on the Non-League circuit. We're privileged to witness one of the games of the season, with the visitors dead and buried at the break. The Miners claw their way back into the game and are unlucky to bow out of the Cup 5-4 after a breathtaking tie. I phoned Ms Moon at half time to tell her 'we' are 3-0 down, only to learn the devastating news that Hotton Council have given the thumbs up to a relief road being built straight through Zak Dingle's home (tip) on Emmerdale Farm. I shed a few tears before watching the second half. 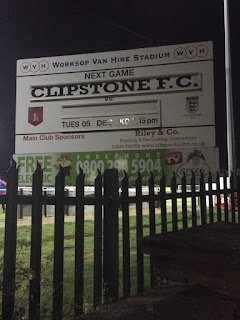 I'm up at Kimberley Miners Welfare, another friendly club, the following night. Their foghorn of a manager isn't spoken to by the referee until the 40th minute for gobbing off, which must be a personal best for him. 'Hobbo' makes me a proper cup of tea in a mug at the break. I spend the rest of the evening chatting to Priory Celtic 'Big Cheese' John Harris who's always good company.

My mate 'Babs' is on a flying visit from Spain. We've sank enough beers over the years to sink the Bismarck. It's ironic that we meet in 200 Degrees Coffee Shop on Flying Horse Walk, late on Friday afternoon. It's like a scene from Nicky Campbell's Long Lost Families as we embrace; Davina McCall would have been in bits. It's the same old Babs as he tries to diddle the barista with a dusty (old tender) £5 note. I meet Ms Moon in the Fox and Grapes for a swift one, before jumping on the No.27 bus home. 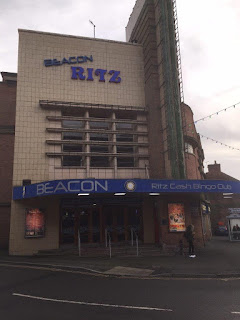 In a moment of madness I purchased a top of the range Sony TV. It's taken me three months to work out how to turn the chuffing thing ON. The Flying Scotsman fully briefed me the other week, after a heavy session, on how to shout at the TV to play your favourite tunes on You Tube. Ms Moon shouts out in her poshest West Bridgford voice "The Alan Parsons Project." I kid you not folks, I'm asleep within the flick of a switch.

I'm off to Leeds to pick up 'Our Joe' on Saturday morning. The plan was to have some lunch up in the hills above Bradford before viewing Eccleshill United v Yorkshire Amateur in the NCEL Division One. A heavy frost has scuppered any chance of the pitch being passed fit. 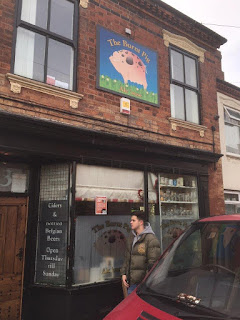 Another option is to travel back down the M1, nearer to home, to take in the top of the table Midland League Div One clash between Ilkeston Town and Walsall Wood. 'Ilson' owner, Alan Hardy, in between a Twitter rant with Rushcliffe Borough Council, has informed me that the game is 100% ON - I reckon he must have lent them some frost covers from Notts County's Meadow Lane ground?

I can see the floodlights of Headingley Cricket Ground as I circumnavigate around the backstreets of the suburbs of Leeds. We pile up Joe's luggage into the boot of the car and head back south. We're parked up within an hour in Ilkeston town centre. 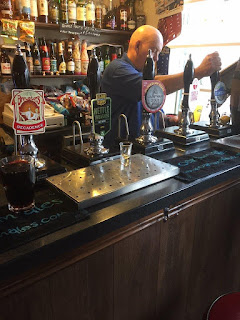 Ilkeston is a town in the Borough of Erewash in Derbyshire with a population of 38,000. It was well known for coal mining, iron working and the lace industry. It is called 'Ilson' by locals.  Ilkeston Town was liquidated in 2010 after a 114-year-old history. It was reformed in 2011, which was in turn liquidated in 2017. Notable residents include: the actors Robert Lindsay ('Wolfie' Smith and William Roache (Ken Barlow).

There's a warm welcome at the Burnt Pig micropub on Market Street. There's a selection of cheeses, scotch eggs and pork pies available. Sticky has a pint of Atlantic Hop from the Merrie City Brewery in Wakefield; and very pleasant it is too. We grab some lunch at Greggs as we stroll through the marketplace. Joe places a few bets at Ladbrokes, including a tip from Dad that the Imps will win at Yeovil. 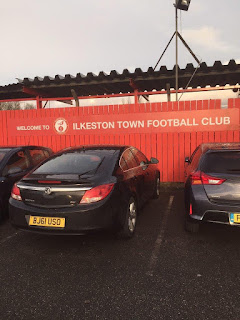 It's £2 to park the car and £5 on the gate. 'Big Alan Hardy' has brought the feel-good-factor back to the Club and town, following historical mismanagement. Former manager, Paul 'Dutch' Holland, was recently given a suspended sentence in the courts for fraud and forgery, when he admitted siphoning money off into his own bank account when hiring the pitch out to another club. Supporters still question where the money went from the transfer of star striker Che Adams in a six-figure fee to Sheffield United. A few seasons later Adams was sold on for £2 million to Birmingham City - did 'Ilson' get a slice of the cake?

On a positive note the good times are back, and so are the crowds (726 pay in today). The clubhouse is choc-a-bloc. We have a quick chat with 'John Mac', 'Chet' and Robbie before walking across the far side of the ground to view the game. There's a minute's applause to remember a loyal supporter of the Ilkeston.

Walsall Wood look sharp up top with 9 and 10 jacket leading 'Ilson' a merry dance. Home defender Shaw is dispossessed, Sullivan sets up Agar who finishes with aplomb. Ilson have started poorly but begin to find success down the left-hand side with a flurry of crosses coming in from former Notts County Academy youngster Jamie Walker. It's Walker who restores parity a minute before half-time, smashing home a close-range volley. 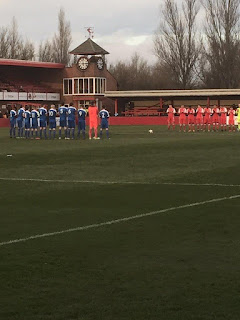 We peg it round sharpish back into a jam-packed bar. 'Our Joe' is crowing that all his bets are in. He just needs Crystal Palace to beat Bournemouth. I say to Joe that I think the visitors' craft and guile will see them over the finishing line, as 'Ilson' have a few young guns playing including the impressive Charlie Jemson, son of former Forest striker Nigel Jemson.

Walsall Wood score a beauty five minutes into the second half. 'Ilson' 'keeper, Ian Deakin is catching flies as the impressive Sullivan takes a touch, before knocking the ball out of his feet and firing home a shot off the inside of the post. 'Ilson' defender Bennett tries to deflect the blame onto the assistant ref instead of shouldering some responsibility himself. He's told by his own player (Walker) to shut up and crack on. 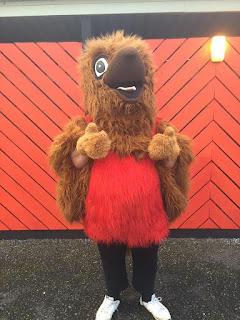 The Robins recover from the setback and play with a bucket load of heart and soul. The equaliser is a beautifully crafted goal headed home by a rejuvenated (after a quiet first half) Montel Gibson. What an advert this is for the beautiful game of Non-League Football as both teams go tooth and nail for the win.

The Walsall Wood 'keeper looks to have a ricket in him, having been caught 'cleaning windows' from a few crosses in the first half. Gibson hits a speculative shot from distance which somehow ends up bouncing over the keeper's 'jazz hands' and into the back of the net.

Walsall Wood are fortunate to end the game with the full eleven on the pitch. Sullivan is a lucky lad, having being previously yellowed, he scythes down an opponent but escapes a second caution after weak refereeing.

We exit the ground with seconds remaining. Five Live are at Selhurst Park. We hear the dying embers as Christian Benteke fluffs an injury-time penalty to cost 'Our Joe' £150 on his coupon. He can't pick 'em like his Dad.

Man of the Match Jamie Walker
Posted by Sticky at 6:58 PM