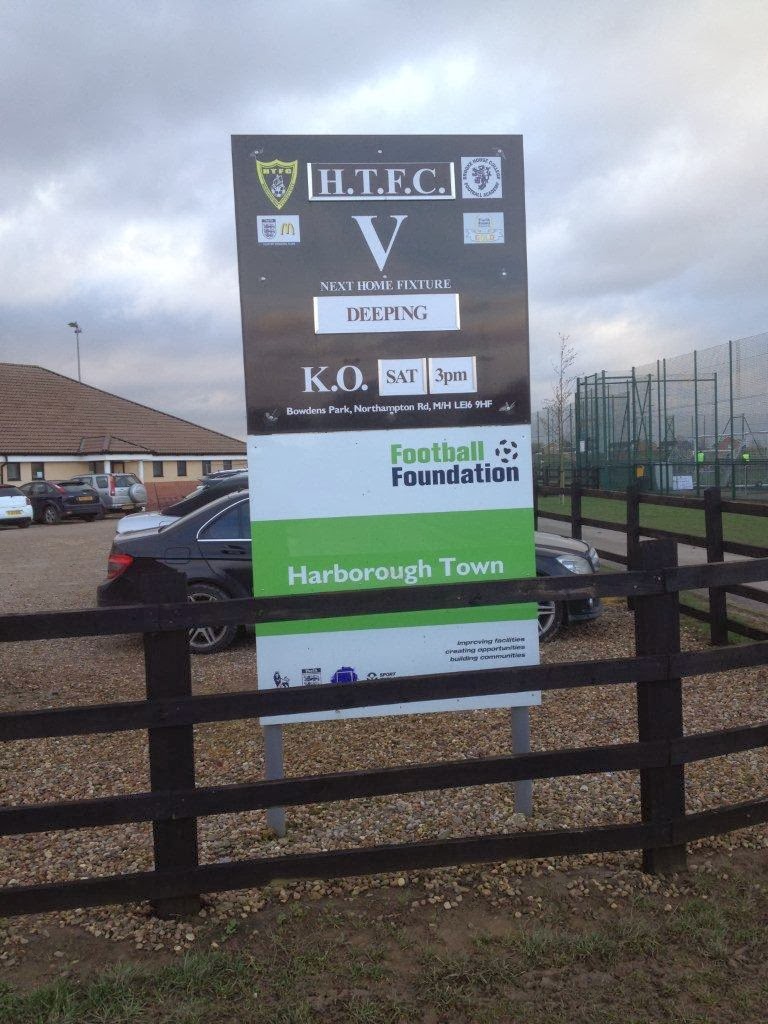 It's lunchtime on Wednesday January 15th. I've got to say I'm not enjoying my 'Three Bean Be Good' soup from Sainsbury's. Sticky junior is taking his driving test at 1.20pm; we're hoping it's a case of third time lucky. My nerves are jangling as a message alert goes off on my mobile: "He's passed!!"

He's been down on his luck of late. The previous Saturday it all kicked off in our front room following the classified football results. Eleven out of twelve forecasts have dropped in on his £1 accumulator, we're just waiting on struggling Notts County v Sheffield United for a £500 windfall. Surely a Blades away win is a shoe-in. Junior is already doing the Highland Fling whilst downing a glass of Pomagne when news filters through from Radio Nottingham's Colin Slater of a shock win for the Magpies.We all have to run for cover, including Murphy the Budgie. Papers are flung from the magazine rack and the air is blue. Trust County to upset the applecart.

It's Saturday morning. I'm hooked up with Notts County Academy Manager, Mick Leonard at Arnold Town's Eagle Valley ground. I've under-clubbed on the clothes front, as a bitter chill blows in off the fields. My phone goes off. The Skipper's game at Lowdham is off due to a waterlogged pitch. A wry smile comes over my face. I say cheerio to Mick and head over to Leicestershire. 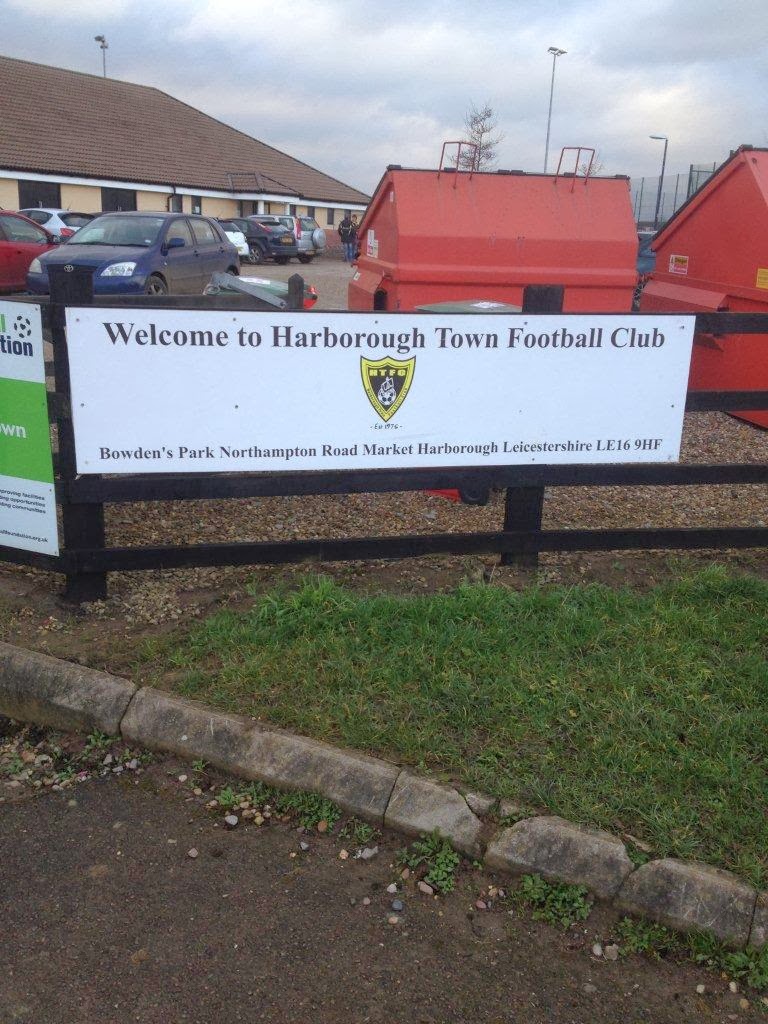 Lutterworth Athletic have been on Sticky's radar for a considerable amount of time now. I've never even driven through the quaint town with its old coaching inns and half-timbered buildings. Hall Lane is out of town. There's plenty of activity in the car park. I catch a club official wandering back to his car. "Game's off mate, it's too muddy to mark out the pitch."

It's last chance saloon. I fish my phone out of my pocket and furiously punch away at the keypad. "You beauty." Neighbouring Harborough Town are at home to Deeping Rangers in the United Counties League. I've seen some cracking games at this Step 5 level.

Within 20 minutes I've pulled up at Bowdens Park on the Northampton Road. It's looking hopeful as I spot a rugby game being played in the vicinity. One of the players gives me the thumbs up - the game is on. 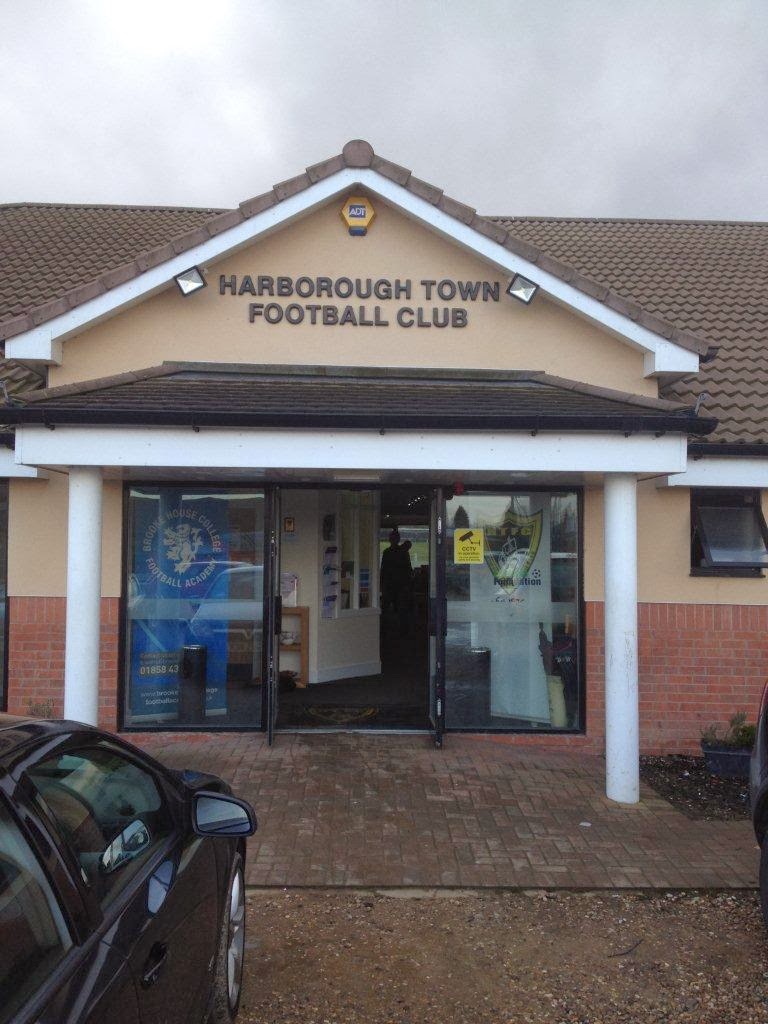 Market Harborough has a population of 20,000 and lies on the River Welland, close to the Northamptonshire border. The centre of the town is dwarfed by the steeple of St Dionysius Parish Church. The square in the town is mostly pedestrianised, with an abundance of Georgian buildings. The name Harborough is derived from Anglo-Saxon 'haefera-beorg' meaning Oat Hill. The market has been established since 1204 and has been held every Tuesday ever since 1221.

Thomas Cook, who was a wood turner and cabinet maker in the town, organised the first group travel by rail from Leicester to Loughborough and went on to found the travel agency bearing his name. The Grand National Hunt Steeplechase was held in the south-west of the town in 1860, 1861 & 1863. The race and meeting was eventually developed into Cheltenham Festival.

The food bar is serving a variety of nosh. It's not usually my bag, but I've had nothing to eat since breakfast. A lady serves up some cheesy chips. I nearly put sugar on instead of salt on my chips. I sit in the bar. Snooker is on the box. It's being presented by Hazel Irving. I didn't think the likes of her, Peter Beardsley and Claudia Winkleman were allowed on TV until after the watershed. 'The Jester from Leicester' - Mark Selby is beating Sean Murphy by four frames to nil. My budgie loves Sean. 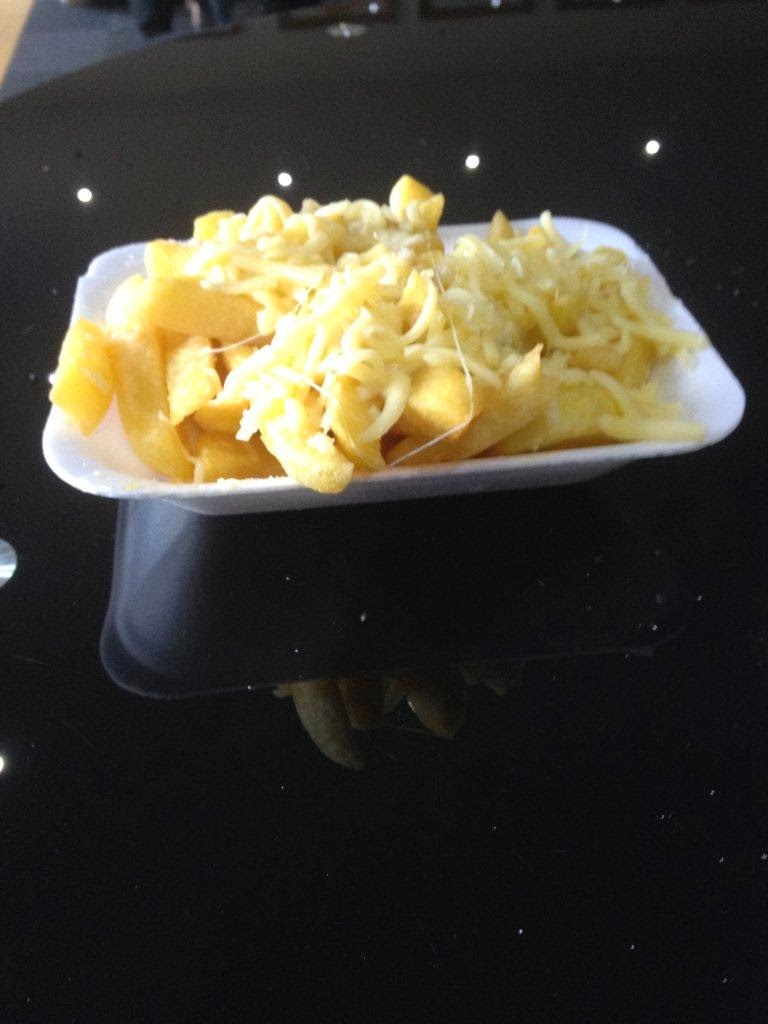 A group of lads behind me are discussing the best player D***y County have ever had - got to say I'm struggling to name one. A lad comes up with the Croatian Aljosa Asanovic.

It's £5 on the door. The programme is not a bad effort for a quid. I've scouted here before, but never blogged. They held a national u15 11 a-side tournament a few years back called Aces.

There's a small stand to the right hand side which has yellow and black tip up seats. The top end is open, with the dugouts to the left of the clubhouse. On seven minutes I attempt to play an ale house clearance back into the arms of the Harborough full back. I've proper shanked it with my Winkle Pickers back over his head. He doesn't half give me some pelters. Like I said to him, "I've had more touches than you son." 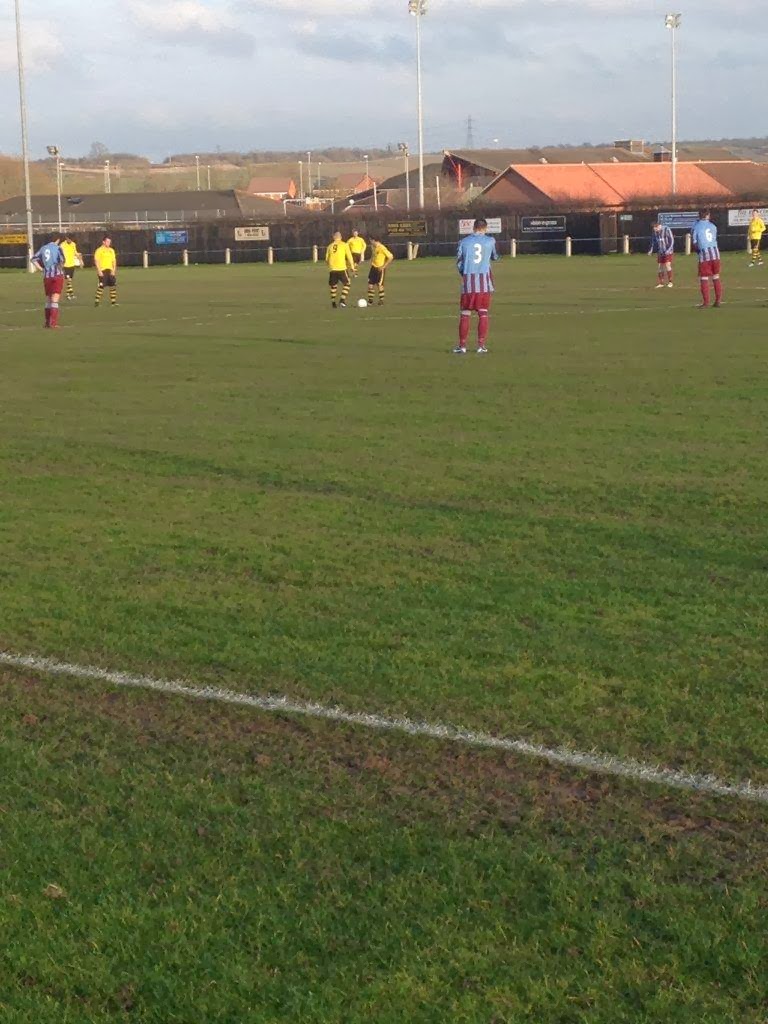 It's been an immense effort by Harborough to get the game on. The going is already heavy. Deeping are two up within half an hour thanks to a disputed penalty and a close range finish. I'm impressed with the hunger, energy and pace of Harborough. 7 jacket and a pocket rocket up front called 'Scouse' pose plenty of problems. I'm no Inspector Morse but I reckon that lad could be from Liverpool.

I'm back in the bar at the break. There's no Mellow Birds or Maxwell House in this gaff, we're talking Nescafe. It's Leicestershire's version of West Bridgford - minus the fur coat and knickers.

Harborough deservedly peg one back with 10 minutes to go, after earlier smashing the upright with a thumping shot from the No.7. It's an important tick off for Sticky Palms, which doesn't leave me with many to do in Leicestershire above Step 6.

Man of the Match: Jonathan Mitchell