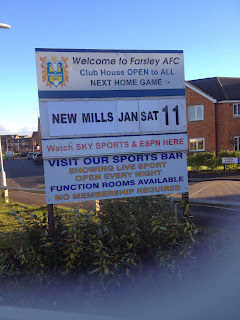 I'm sat in the dug-out watching Sticky junior's under 18s. It's the 2nd round of the Cup. We've avoided all the big guns, but are pitting our wits against the table-toppers from the League below. The carrot being dangled for all of the boys is that the final is to be staged at Nottingham Forest's City Ground (they've won the European Cup twice you know).

We're getting a good doing-over. The craic with the visting team's manager remains good-natured and light-hearted though. I've taken over this team from former Magpies and England under 21 forward Gary Lund. I felt the boys deserved one last year, as it looked like the team would fold.

I've already subbed Sticky junior, who has sloped off for a crafty fag. Our opponents send on their reserve 'keeper as an outfield player; he's not that mobile folks and has appeared more interested in the smell of bacon wafting over from the Clubhouse food bar. He picks the ball up 25 yards out and hits a shot with the inside of his boot, which sails over my 'keeper's head into the top corner of the net. It's his first ever goal. 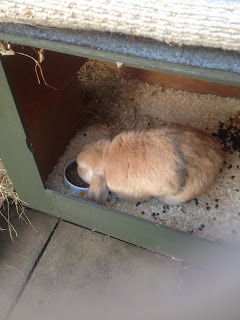 All five of their subs race onto the pitch for an enormous pile on - I bet he's lost his appetite now. Their manager is fuming at the antics of his subs. He shouts to the ref to book all 5 players for entering the field of play without his permission. I am roaring with laughter and so is the referee. It's another comedy moment in Sunday morning football.

I spend Friday evening flicking through the Nottingham Evening Post whilst downing a bottle of Bordeaux won in a raffle at work. Finley, the rabbit, will be tossing and turning in his hay, mulling over another crap Non League score prediction. I unlock the back door in the morning to serve my furry friend some breakfast. He's flat out on the concrete, not moving a muscle. Mrs P has forgotten to put him to bed. It's a disgrace. Poor old Finley has been shivering for most of the night. What if 'Freddie the Fox' had rocked up?

He finally comes round after 7 or 8 strokes of his fur. The little lad is that cold that I nearly have to fetch the scraper out of the 'Rolls Royce.' Finley says that Farsley will win 4-0. Bloody hell son, I don't think New Mills are going to be chuffed to hear that. Sue and the gang made us feel really welcome up in High Peak a few years back. 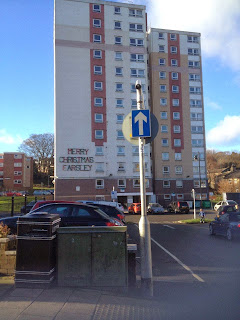 I leave the nastiest budgie in Keyworth, Murphy Palmer, whistling and chirping away to Simply Red's "Something Got Me Started." I drop 'The Skipper' off at a village close by, where he is refereeing. I inspect the pitch with him and ask the team manager to fork a large area of standing water.

First port of call this morning is Kimberley Leisure Centre, close to Junction 26 of the M1. I've been tipped a lad to watch. The boy doesn't look particularly interested. I cross him off the list and head up the motorway towards Leeds.

Hells teeth, I've forgotten the Sat Nav. After a couple of false starts I finally leave the M621 in Leeds and drop onto the A647. There are no signposts for Farsley, but I somehow stumble across the commuter town. I'd got my beady eye on a boozer in Town Street, the traffic is gridlocked. A car has been abandoned at a busy crossroads. I squeeze past the vehicle but end up out of town and in a place called Pudsey where the cricketers Raymond Illingworth and Matthew Hoggard were born, as well as the BBC bear. 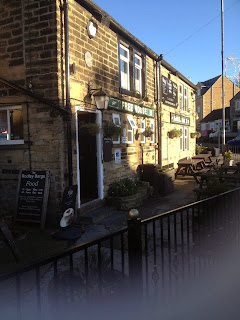 I pull into a parking spot adjacent to the canal and slip into a pub called the Rodley Barge. I quaff a pint of Pennine 2014 accompanied with a sausage and bacon cob. A family of goths call in for lunch as Kasabian blasts out of the speakers

I take a peek down the canal as a chap appears from out of the door of his barge. I exchange in some small talk. He tells me he's recently split up from his wife and that he's trying to sort out their financial affairs - bloody hell pal, I didn't ask for your life story, after all I've a match to go to.

The Throstle's Nest is a short drive away. They very kindly tweeted earlier in the day that the game would be going ahead. Farsley are nicknamed The Villagers. They rose from the ashes of Farsley Celtic who were formed in 1908. 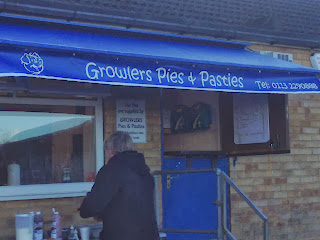 It's £7 on the gate and £2 for the programme, which is well worth the read. I take an envious look at the 'Growlers Pie and Pastry' shop. You can hear a pin drop in the Clubhouse - 'Dirty Dirty Leeds' have been thumped 6-0 by Sheff Wed. A little boy sits in the corner, draped in a Leeds scarf - I think he might need counselling.

I order a cup of coffee and peel off a few layers of clothing. I'll knock the ladies dead in West Yorkshire with my new beige jumper from Next. I watch the fag end of Hull City v Chelsea.

I love the ground. It has a real feel of football about it. The H.A. Fox Jaguar Stand runs along the nearest touchline, with a smaller seated stand to it's left. The dug outs are on the far side. The music from Radio 5 Live's Sports Report is played as the teams emerge from the tunnel. 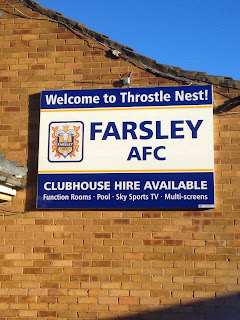 New Mills begin the game at a lively canter, their number 9 spoons a sitter over from 8 yards out. They're made to pay for it on 3 minutes with a close range finish from Farsley captain Rob O'Brien. A Daniel Grimshaw own goal on 12 minutes puts the home side two to the good.

I'm back in the Function Room at the break for a soft drink. The place is bustling with folk. What the hell is going off at Sincil Bank, my team, Lincoln City, are 2-0 down to Conference North side North Ferriby from Hull.

There's not much doing in the second half. Farsley's leading scorer Aiden Savory runs down cul-de-sacs. They hit the woodwork twice. New Mills pull one back with a neatly worked goal by Chris Baguley. The Farsley 'Baby Squad' behind the goal aren't half giving the New Mills 8 jacket some pelters for carrying a bit extra. The highlight of the day though is on 80 minutes when Sticky Palms gets his grubby mitts on the match ball - mission accomplished. I can't arf pick em.

Man of the Match: Finley Palmer
Posted by Sticky at 7:34 PM