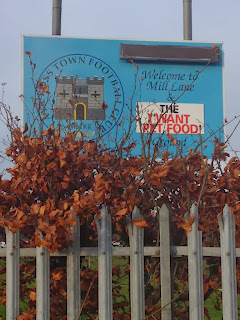 It's a blustery Sunday morning at Keyworth United's Platt Lane ground. I'm setting up for my under 18s. I've already spotted the referee in the car park. I don't rate the guy; he has no connection with the lads. I'm usually positive in my match reports about refs.  I rarely speak to officials apart from to welcome them and pay them. This guy loves to get his notebook out and wind the boys up.

He wanders across to me to ask who will be running the line. I take the flag off him and he remarks to be careful as the black plastic cap keeps falling off it. The game is played and managed badly. He'll be using his pencil sharpener when he gets home. There's no dialogue from me with him during the match. He collects the flag off a parent and marches towards me. The black plastic cap has fallen off and he wants to charge me £10. I burst out laughing. He says he's going to report me to the Notts FA. Where do they get these guys from?

It's Friday evening and the 11 day detox is complete. No more celery, raw carrots and Greek yoghurt. I sample a couple of Stella's and some red wine. It's an early start on Saturday morning. Murphy the Budgie is squawking and chirping at a reckless shot played by England's Kevin Pietersen, who has once again thrown away his wicket. 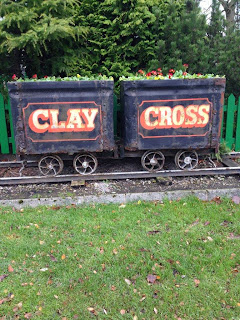 I'm on a scouting mission for the Pies in the old mining town of Hucknall. We've been tipped a boy. The reception on Five Live is dreadful. I can barely hear the squeaky dulcet tones of South Londoner Danny Baker.

I pull into the car park of former FA Trophy finalists Hucknall Town. I bump into an acquaintance. We chatter away as I view the game. I form an opinion quite quickly on the intended target and report in to the Head of Youth.

I've plenty of time to kill, but decide to head up to North Derbyshire as quickly as possible. I join the M1 motorway at Junction 27 and exit at the next turn-off. I skirt through the town of Alfreton, passing its War Memorial as the skies darken and the wind picks up. I'm on the A61 travelling through the village of Shirland. There's a table-top sale at the Village Hall as an alternative if the game is not up to scratch. 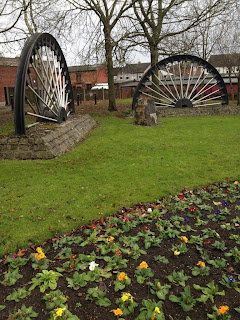 Bloody hell, there are speed cameras everywhere. There's no way I'm going to contribute towards  the Derbyshire Constabulary Christmas party. I got nicked for speeding for the first time in over 30 years of driving the other day.

I clock the old winding wheels of Parkhouse Colliery in the town of Clay Cross. I park up the Rolls Royce and take a few snaps. There's a memorial for the many men and boys to have died at the mine. Forty five lost their lives in an explosion underground back in 1882. 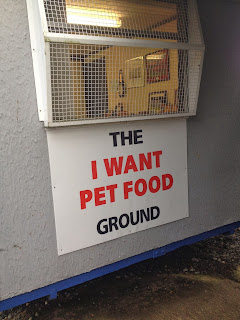 The High Street is crammed full of take-away establishments. There's Kathmandu, Pirate Pizza and Mr Wongs. The town has sold its soul to Tesco and its £22 million re-development. If I'd chanced upon a decent pub I'd have grabbed a sandwich and a soft drink. Hey-ho, it's a West Country Cheddar cheese and pickle sandwich, a bag of crisps and a bottle of Tropicana in the £3 'Meal Deal.'

Tony Blackburn's 'Pick of the Pops' is on Radio 2. I once went to an 'Abba Tribute Night' in a hotel in Nottingham. Blackburn was the compere. He was bragging about huge listening figures on his Gold Breakfast Show. He asked the audience if anyone listened to it. I shouted out "No, it's crap." I wasn't invited back by Mrs P's boss the following year.

I leave the car in the community hall. I can see the players warming-up at the 'I Want Pet Foods' ground on Mill Lane, just a short walk up the road. The club's stadium was re-named 'The Devil Made Me Do It' ground back in July 2012 after a local tattoo studio won a raffle to provide a new name. I can remember this making the headlines on East Midlands Today. 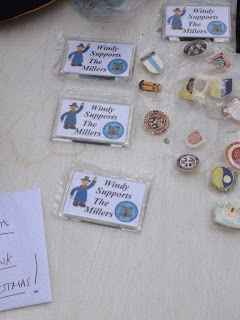 I'm greeted by two jolly fellows on the gate. It's £3 admission, including a free programme, with over 40 pages packed with information. No wonder it wins Programme of the Year for the Central Midlands League, with it also climbing to 12th position in the National Listings. Well done lads, it's a cracking effort. I enjoy the piece on Celtic and their Intercontinental Cup game against Racing Club of Argentina in 1967. Five players were sent off in a stormy encounter.

"Enjoy the game" says the gateman. I love the personal touch. I pass a wooden table with boxes full of old programmes. There are badges and Clay Cross merchandise on offer. I buy a 50/50 ticket. Domino's Pizza's are donating some prizes.

The crystal clear PA is banging out Shane McGowan and Kirsty MacColl's 'Fairytale of New York.' I walk past the ground's one and only covered stand. Housing from the old pit estate backs onto the far goal. The remaining three sides are open, with 'The Tunnel Cafe' tucked away to the left of the main gate.

The pitch is rolled and in immaculate nick for this time of year. Clay Cross Town believe in tender loving care. I do two laps of the ground before settling in my grey tip-up seat, shielding myself from the gusty conditions. 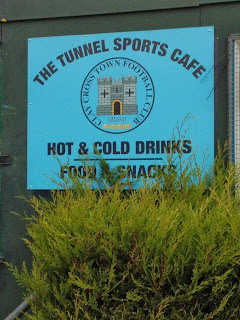 I'm not expecting much, as it's a League that often falls short on quality. At least the home side try to play it on the carpet. How the Phoenix Club are above them, Lord only knows. Max and Paddy are disappointing, and there's a no-show from club mascot Gerry the Berry.

The visitors' goal has led a charmed life, when the Millers finally take the lead following a corner which hangs in the wind and is nodded in at the back stick by the big number nine.

The West Country Cheddar has caused quite a thirst. I shell out £1.10 on a Lucozade Sport at the cafe. Slade are blaring out of the PA. I hook up with a guy in the second half who lives up at New Mills. He has a good geographical knowledge of the Manchester and Cheshire non league scene. He tips me grounds at West Didsbury and Maine Road, which are now on my to-do list.

We're joined by Clay Cross Jack-of-all-trades committee member 'Martin.' His passion for the club is awe-inspiring. I get a run-down of the club's history. He invites me up to the Woodthorpe Inn for some after-match hospitality. What a splendid gesture. We applaud loudly at the stunning second, and what turns out to be, winning goal. What a day out I've had. All for £3.
Posted by Sticky at 7:48 PM

Great to welcome you to CCTFC we love to see football fans coming to see us.
Its great to get a feel for how other people see us too.
Thanks very much for the blog and hope to see you around the grounds.
Cheers