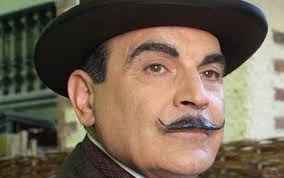 It's the evening of the Real Ale Trail Christmas Party. I'm dabbing on some of the lads' Shockwaves gel. There's just time for a quick spray of the old Joop, before scurrying down the alley and hopping onto the Trent Barton rush-hour bus to Nottingham.

A smirking Zuffler is already quaffing a pint of Shipstone's bitter in the Ned Ludd on Friar Lane. They have a fine selection of premium lagers, rocket fuel ciders and micro-brewed real ales. We trudge up Maid Marian Way towards Canning Circus. Taggart joins us in the Organ Grinder, where we enjoy a couple of Blue Monkey ales. Much of the night is a blare. I recall Taggart clearing one pub, not with his party-piece fart, but by playing B A Robertson's 'Bang Bang' on the jukey.

My head is certainly bang banging on Saturday morning and so is The Zuffler's, who according to Twitter gossip didn't turn in until 02:00am. Mrs P is watching the BBC News. I sit silently on the sofa reading Hope and Glory by the journalist and broadcaster Stuart Maconie on my Kindle. There's a fascinating chapter about 'Thankful Villages.' Fifty one villages in England and Wales have no war memorial because their soldiers sent to war returned home alive. One of these is Wysall, just over a mile from my home. 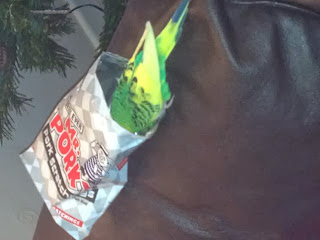 Those jokers from the BBC Weather Centre are predicting a sea of blue all over England today. It'll scupper any hopes of Trumpy and I visiting St Ives in Cambridgeshire. He texts in to say he'll be viewing Leicester at QPR in the lunchtime kick-off.

I scour the Interweb to see where the nearest ground in the Non League Pyramid is, that I've yet to chalk off. Barrowby FC, of the Central Midlands League South, are entertaining Blidworth Welfare from north Notts. I put a call in to the Mayor of London at his Southfork Ranch, just a few miles away from the ground. It's a date.

I abandon the cleaning of the inside windows. "Half-a-job again", remarks Mrs P. Murphy the budgie is swinging on his perch. He's listening to Stevie Wonder's 'Yesterday' on Radio 2's Sound of the 60s show. 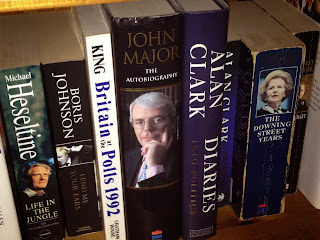 I'm in the 'Rolls Royce' enroute to the village of Harby in the heart of the Vale of Belvoir. I'm playing 'Radio Roulette.' I chance upon Radio Leicester who are at Loftus Road. I recall their hilarious commentary from Vicarage Road at the fag end of last season, when the Foxes missed a penalty and Watford raced-up the otherend to score.

I drive past the Stilton cheese creamery and into the village of Colston Bassett. I'm soon pulling into 'Southfork.' 'The Mayor' has just returned from a cricket coaching session at Trent Bridge. I'll be assisting him with running an under 10s side at Keyworth next season.

I'm in 'The Mayor's' study, glancing at his bookcase. He is a True Blue (Tory). He has every Conservative MP's autobiography that has been published since 1725. It makes me weep. He only moved back here from London to be near the birthplace of Margaret Thatcher. We'll probably have to lay some flowers outside her old green grocers in Grantham. I'll lob a lump of coal through the front window, for old times' sake. 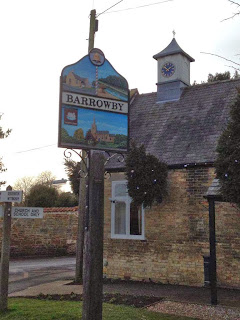 'The Mayor' fancies the first half of Liverpool v Cardiff. We drop into his local - the Nags Head. I enjoy a pint of Jennings Cumberland. Luis Suarez, once again is in superlative form. We depart at half time, to make the short journey to Barrowby, 2 miles west of Grantham. The village is in the South Kesteven district of Lincolnshire with a population just shy of 2000.

As we drive through the village we notice the fire-ravaged remains of the Royal British Legion. "I bet there is a story to tell there", says 'The Mayor.' We pass the White Swan and The Cakehole cafe and deli. The ground is situated on the edge of the village. I'm not saying it's a hike from the visitors' car park to the main pitch, but we considered booking a cab.

We make a detour to the brick-built, Football Foundation funded clubhouse to pay our dues. Today's attendance will just about cover the three officials. It's £3 entranance, including an excellent programme. 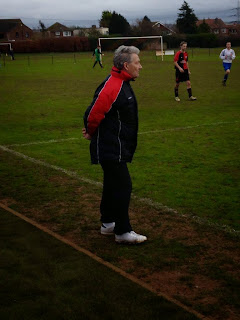 I've already warned 'The Mayor' about the standard of football. Step 7 ain't been at its best this season. I notice a little bloke in a Blidworth tracksuit directing traffic from the technical area. It's Mickey Gould who used to work with me at Meadow Lane. We have a chinwag between breaks in play.

'The Mayor' is having a tough induction with Step 7. He lets a ball go through his legs and chases one or two stray ale-house clearances to retrieve the ball. Barrowby are bossing it and are 3-0 up at the break. I bump into my old boss at Notts County Youth, Darren Heyes. He invites us back to the boozer for a swift one. I take a look around the cottage he's bought adjacent to the pub. It'll take more than Nick Knowles and the DIY SOS team to put it right. 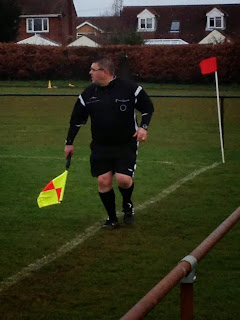 Conversation in the pub turns to the fire at the Royal British Legion two years ago. Darren asks the landlord if he has benefitted from it. He nods in agreement. I start to make a few routine enquiries (PC Palmer) but I'm met with a wall of silence. It's like Royston Vasey, readers. The fire is shrouded in mystery. A committee member was bailed over  a year ago on fraud and embezzlement allegations.

We have a sweepstake on what the score is going to be as we walk back to the ground. A jockey is riding a racehorse up the street. He stops for a natter. Tommy Hawkins is an 8 year old point to pointer, who races at nearby Garthorpe. He used to live at Jonjo O'Neill's yard.

Barrowby are in a cruise control and have already bagged another goal. Poor old Gouldy. The only thing we can both talk about is the fire, though. New Scotland Yard are going to have to drop the Lucan Case for now, remove Clouseau and Cato and wheel out Hercules Poiroit from retirement in Brussels. Who, if anyone, torched the Royal British Legion?

Man of the Match: Ned Ludd
Posted by Sticky at 2:30 PM