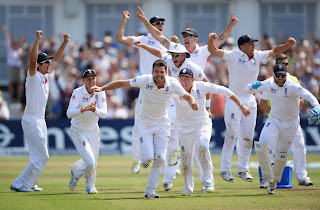 The sun is blazing in our back garden. Sticky’s got his feet up on the patio, and is sinking a Stella or two. I’ve got a few days off for the Ashes. Half a mile down the road, TV cameras are filing into the car park at Plumtree Cricket Club, where my two boys used to play.

The breaking news story is that Trent Bridge has banned Boring Billy and his bloody trumpet from the Ashes first Test. The Barmy Army are crying into the beer down at the PCG as they lock horns with their Australian counterparts in a 20/20 game.

I get little sleep, as I’m so excited. Dafty picks me up at just gone 8 am. We drive through Tollerton and down the Melton Road. Trent Bridge is a hive of activity. The place is absolutely buzzing. We park up on Henry Road and walk down the Avenue. Tim Abraham from Sky News is wandering down the road towards Cafe Nero, a haunt of Wee Billy Davies and his motley crew. 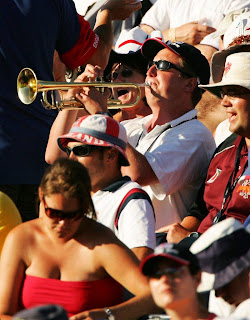 We waltz through the doors of the Southbank Bar on Trent Bridge. A band strikes up a tune, a guy starts rapping. He aint no Dizzee Rascal folks. Dringy is tucked away in the corner of the bar studying his correct score matrix. We shout up a coffee and a tea. Most of the boys are already on the lash. It’s not even 9 o’clock yet.

I polish off a huge ‘Big Breakfast.’ It’s piled high with chips. We cross the Radcliffe Road. Alan Brazil from Talk Sport limps over the road towards Ladbrokes. He’s just hosted a show from the ‘World renowned ‘Trent Bridge Inn. I’m with legendary leg spinner Jitz Jani. He clocks a group of Aussies and offers them some banter “4-0 to the India” is met with stony faces. Aussie don’t like it up em!

I’ve shelled out £80 for the best seat in the house (thanks Dringy). We’re on the top deck, with the wicket to our left. The flag of St George is rolled out. National anthems boom out of the speakers. The Red Arrows roar overhead. Let the drinking commence. 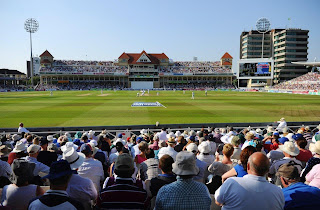 Sticky rekindles his love affair with Stowford Press cider at nearly £4 a pint. It’s £36 per round; that’s drinking, not golfing. The ball is swinging around like an Olympic hammer thrower. Cook and Root look set but both are back in the hutch before lunch. I miss the dismissal of KP as I’m drinking and chatting outside the TBI.

A doner kebab with Big Bobby Baker is a lifesaver at tea. It allows me to push on with the booze fest. I collect my winnings from the lunchtime to tea-time session runs prediction.

England collapse like a deck of cards. Swann and Broad don’t have the stomach for it. Broad, mysteriously fails to show up for a bowl. It’s left to Finn and Anderson to show some fight. I peer through my binoculars as a ball from ‘Jimmy’ nips back and clips the top of Michael Clarke’s bail. 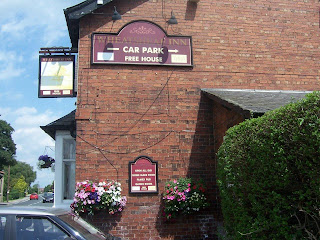 We drink long into the night. I have a few Berlusconi’s (real ale) from Holden’s Brewery in Dudley, at the Stratford Haven and Monkey Tree. I stumble into a black cab at just gone 10.30 pm. I don’t want the day to end.

Two days later and once again I’m wandering out the ground. I punch out the numbers to our landline, as Mrs P’s mobile is going to straight to voicemail. It’s bad news folks, Mrs P has left her index finger in the food blender, with the power on. I inform the TCCB that she’s unable to replace umpire Dar on the fourth day.

It’s Saturday morning, it feels strange that I’m not off to the Test. The last three days, meeting up with my best mates, in tropical conditions, has felt like a three day bender in Ibiza. 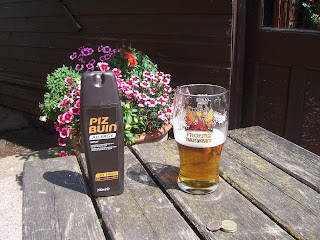 It’s a big day in Sticky jnr’s calendar. Budgens wall is shut for the day to all dossers, as they are all up the Keyworth Show. I remind him of his drinking exploits the previous year: “yeah Dad, I was an inexperienced drinker back then.” He’s 18 in November.

I meet one of the lads who snouts about for me close to the M1. There are long delays on the A1, so we plump for the M18 and M62. We’re soon on the A19 and stop off at a delightful roadside inn, the Wheatsheaf, a mock Tudor building in the village of Burn, just outside Selby. ‘Heart Skips a Beat’ by Olly Murs, not forgetting folks, Rizzle Kicks, is on the kitchen radio, as Chef knocks Sticky up a Ploughman’s Lunch, which is washed down with a pint of Ashes Ale from the York Brewery. We sit in the back garden, basking in the sunshine, admiring the flourishing, colourful hanging baskets.

Selby is a town situated in North Yorkshire, 14 miles south of the city of York, with a population of 13,000. It once had a large shipbuilding industry. The Selby Canal brought trade in from nearby Leeds. It was once a market leader in coal mining. Wistow Colliery, which was part of the Selby Coalfield, holds the UK’s record for most coal mined in a week, with an astonishing 200,000 tonnes being produced. Former Grimsby Town and Watford goalkeeper, Steve Sherwood, was born in the town. 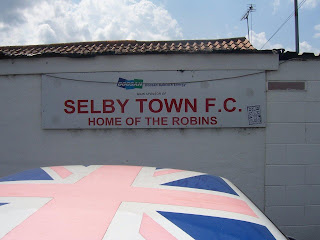 I take a stroll around this delightful little market town, with its striking church spire and bustling crowds. We pop into the back yard of the Griffin Hotel in Micklegate. Folk are crowded around the TV watching the cricket. I can’t bear to look at the score. It’s like watching every episode of Heartbeat, and then missing out on the last one.

It’s £3 on the gate. No programme is issued today. The clubhouse is to the left, with the dugouts over yonder.

The Rigid Group Stadium is the home of Northern Counties East team, Selby Town. The visitors are Marske United, which is situated near to the seaside town of Saltburn on the north east coast. The teams stroll out to the Pick of the Pops theme tune. The crazy DJ keeps shouting out “Shabba.” 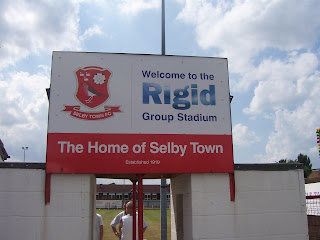 There’s rustic feel about the place, with its perimeter red rail and parched playing surface. There’s a rickety old stand behind the nearest goal. I plonk myself on a wooden bench, gasping for air, trying to fathom out how the players can perform in this stifling heat.

The visitors, in a Sheffield Wednesday replica kit, are well drilled and technically superior. They play out from the back and from side to side. They overcook it in front of goal, passing it to death. The Robins do well to be still in the game at the break.

I meet a guy at the break who is an aficionado of the Northern League. He follows Marske, amongst others. “We’ve eight missing today”, his face is bowed and covered in disappointment. His passion and love is beautiful and heart-warming. The DJ comes good with The Specials greatest hits. Selby’s captain’s little boy throws a few shapes to ‘Rat Race.’ 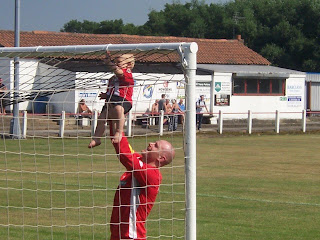 Selby play a better game in the second period and are unfortunate to fall behind to three quickly taken goals. They claw two back and are desperately unlucky not to equalise in the dying moments.

There’s just time for me to poke my head into the cosy social club. Pendants and pictures are hung on the wall. A TV is blaring out. There’s not a soul in sight. I have to dash back home to Nottingham; Mrs P’s finger wants dressing.

Man of the Match: 6 jacket for Marske