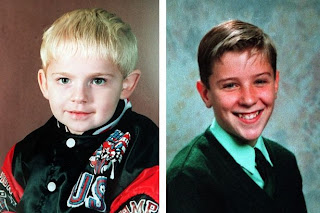 It’s Saturday March 2nd and Sticky Palms is pacing up and down the touchline at Keyworth United’s Platt Lane complex. The reason my groundhopping has tailed off is because I coach ‘The Skipper’s’ team. We are drawing 2-2 in the Nottinghamshire County Cup semi-final. The final minutes of the game are ticking away. Dunkirk are our opponents. They are revered and feared in junior football.

The Skipper’ hits a slide-rule pass to a boy that’s been with us since he was eight. Adam scurries away from a tiring defender. He holds his nerve and blasts the ball into the back of the net. I can’t look at his Dad because I know I’ll burst into tears. What a journey we have had. I will make sure we enjoy the final at Arnold Town’s Eagle Valley ground on April 13th.

It’s Friday evening and I’m mooching about in the wine section at our local Sainsbury’s. That blooming 12% rocket fuel Rioja, that did for me the other week, is on offer again. I give it the swerve and plump for a bottle of Hardy’s Stamp. Mrs P has fallen victim to the dreaded lurgy. It means we can tuck into a fish n chip supper. 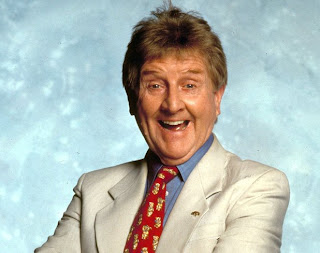 I’m down in the kitchen for 7.30 am on Saturday. I put my headphones on and do some research on the Cheshire town of Warrington, whilst listening to ‘Gravel Pit’ by American East Coast hip hop group Wu-Tang Clan. I was reminded of the song yesterday on 6 Music’s Radcliffe and Maconie show.

Twitter is reporting on the death of ‘faulty microphone’ comedian Norman Collier. The north west’s top blogger, Uwdi Krugg, tweets that the ‘Samba Boys’ of Runcorn have landed in Manchester for the NWCL top of the table clash with Maine Road.

We have royalty travelling in the ‘Rolls Royce’ today. Mr Trumpy Bolton is aboard the team bus, following a three month spell on the sidelines. The upholstery is treated to some lemon fresh spray that will hopefully overpower the cider fumes from his trusty litre plastic bottle of Bulmer’s. 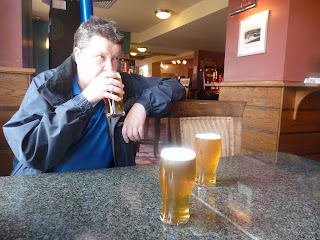 Mrs T is giving ‘Trumpy Towers’ a lick of paint. “Get me out of here” says Bolton, “and if you get the chance love, the lawns need cutting." He slams the door and makes a hasty getaway. The legend has had two rounds of pate on toast for breakfast, washed down with a tin of McEwans.

He confesses to having successfully completed the ‘Dryathon’ in January. A stone has been shed and a penchant for green tea has been discovered. He claims that a sniff of the barmaid’s apron today may have him doing hand-stands, following a week off the sauce.

Warrington and Runcorn fans please remain seated while I reveal that Trumpy Bolton’s sole mission in life is to complete a financial transaction, usually involving a pint of cider, in every village, town and city in England, Wales and Scotland. He has a dog-eared, crumpled old atlas with each place visited highlighted off. 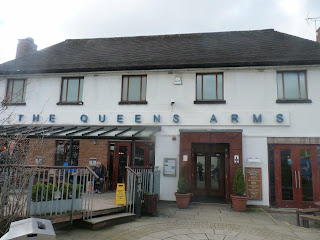 He has rediscovered his zest for the Foxes of Leicester. Recent away trips have doubled-up into binge-drinking weekends away in Ipswich, Blackpool and Huddersfield. He even bagged two tickets in Suffolk to see cheery Cockney duo Chas n Dave.

There’s almost a multiple pile-up on the A50 when the legend announces he is getting wed next year. Plans are afoot for a stag weekend in the Isle of Man – I’ll be checking out the local non-league scene in Douglas.

I chuckle at a tourist sign in Stoke that says Cultural Quarter.Ironically it’s close to Stoke City’s Britannia Stadium. 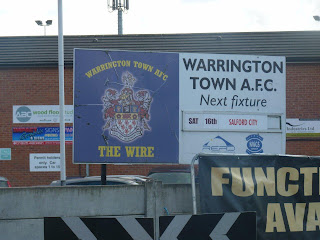 First port of call is the Queens Arms, a Wetherspoons in the town of Winsford. We park in a ropey area of the town. A battle-scarred youth passes us on a dodgy back street. It’s only midday and trade is already brisk. Trumpy shouts up a pint of cider and two pints of Oracle from the Salopian Brewery in Shropshire.

He sits gooey-eyed, in silence, admiring the drinking prowess of a young girl, who effortlessly downs 3 bottles of WKD in the space of half an hour. I wolf down a chicken and bacon salad before departing to our next watering hole. 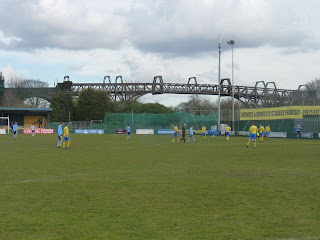 I flick the radio on to hear Darren Fletcher describe the opening goal for Wigan-born Everton midfielder Leon Osman against Man City. David Platt has missed it; he’s preparing the oranges in the away dressing room.

Trumpy has sniffed out a Marston new build in the middle of nowhere. It’s a soulless joint. Sticky’s on Coca Cola now as Bolton ups it a gear in the drinking stakes. I’d put him in the same bracket as Best, Burton and Reed.

We hit the town of Warrington, on the banks of the River Mersey, at 2.15pm. The town embraced the industrial revolution and exploited the nearby Manchester Ship Canal, close to where the local football is situated. Back in the day, steel-making, brewing and textiles were the biggest employers in the area. IKEA opened its first store in Britain in Warrington. 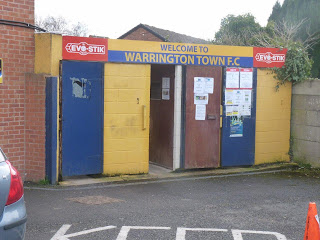 On March 20th 1993 the IRA detonated two bombs on Bridge Street, in the town, the day before Mother’s Day. Two young boys tragically lost their lives. 56 people were injured, 4 seriously.

We cross over the Cantilever Bridge and park the Rolls Royce outside the Latchford Baptist Church. A group of lads point Trumpy in the general direction of another hostelry. Steely Dan is blasting out the juke box of the Cheshire Cheese as the legend necks another. 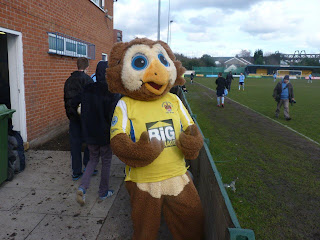 What a pair of buffoons we are, a wrong turning out of the pub door causes a 20 minute diversion. I pay my £7 on the gate and £2 for an informative programme. I notice an excellent stat in the programme. Two European Cup winning captains went to the same school: Phil Thompson (Liverpool) and Dennis Mortimer (Aston Villa).

We all stand in silence to remember those that lost their lives or were seriously injured 20 years ago. It’s a moving and special moment.

Warrington Town is a lovely club. They have Ollie the Owl as a mascot and attract loads of kids in club colours. The ground is neat and tidy. There’s a club shop and a modern brick-built clubhouse. There are seated areas on both sides of the ground. 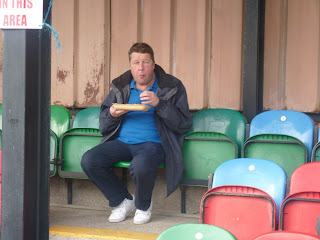 Bolton checks out the opening hours in the Social Club, while I take my customary stroll around the ground. The home fans are in good voice. Lyrics are used to the tunes of Coronation St, The Beatles, Bananarama and Depeche Mode.

I find Trumpy slumped in a seat on the back row of the stand, stuffing his face with a steak and kidney pie. The game is nothing much to write home about. All the action seems to take place off the field of play.

I’ve clocked former Barnsley and Wigan midfielder Darren Sheridan to my left. The woman in front of him has stood up. Sheridan politely asks her to sit down as she is blocking his view. Unpleasantries are exchanged. The woman storms off eventually. Trumpy is captivated by it all. 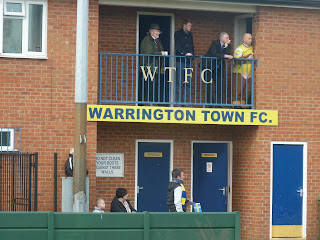 The Warrington left winger skins a defender and pops a shot off. The ‘keeper can only push it out to former Bury and Morecambe striker, John Newby, who stabs the ball home for the opening goal.

Darren Sheridan’s mood hasn’t improved much. He’s fished a few betting slips out of his pocket and has got Sticky on the phone checking the latest scores. He takes the news badly that Liverpool, Villa and Alfreton are all behind. He scrunches up his coupons.

Bolton has purchased another pint and half from behind the bar. It could be a no-show in the second from him as Italy entertain Ireland in the Six Nations. I have a quick chat with the ‘Salford Three’ behind the goal. Apparently the team are in transition. 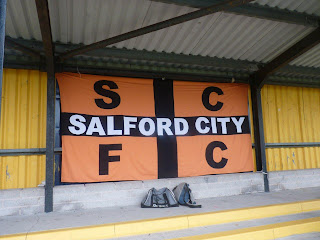 I also bump into Jon Newby’s father who is distraught that his lad has been subbed off. He proudly tells me how his lad scored Morecambe’s first ever League goal. His other son, a marketing manager at Chelsea, has just phoned in from Cowdenbeath where he is groundhopping.

I find Trumpy studiously looking up and down at Warrington’s manager, Shaun Reid (brother of Peter). Reid’s face is twisted and contorted. At no time does he appear to enjoy the game.

Warrington are 2-0 up by now. A nervy last 15 minutes are endured after Adrian Bellamy pulls a goal back for the visitors.

Man of the Match: Salford ‘Keeper
Posted by Sticky at 7:38 AM

Green in The Valley said...

Colchester supporter here from the Isle of Man If you come for that stag weekend, give me a mail. Some cracking pubs over here and a good standard of football in our premier league. I am President and former player at Laxey Football Club and if we are playing we can give you a good afternoon out

Green in The Valley said...

Colchester supporter here from the Isle of Man If you come for that stag weekend, give me a mail. Some cracking pubs over here and a good standard of football in our premier league. I am President and former player at Laxey Football Club and if we are playing we can give you a good afternoon out