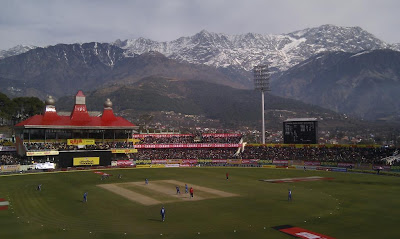 I coach a team of under 15s on Saturdays. It limits the amount of groundhopping I can cram in. Today we are entertaining a team with a 100% record. Last season they won the treble. We lost 6-4 at their gaff, earlier in the season. I watch their warm-up and study their body language. They are cocksure and confident. The game appears to be won before a ball has even been kicked.

Fast forward the clock an hour and my little team, full of local lads, are two the good. Egos have been bruised. We’ve hassled and harried them - even outmuscled them. You find out so much more about a team when they are behind; particularly when it's alien to them.  My boys have been magnificent. They have footballed the opposition off the park. We score a third and put the game to bed. The beautiful game has been kind to us today.

It’s Friday evening and I’m frantically wading my way through message boards on Tony Kempster’s groundhopping forum. Heavy snow is falling in the north and east. There’s a chink of light in Warwickshire. Nuneaton are quietly confident of getting the green light for their Conference Premier fixture at the Liberty Way Stadium against Braintree Town from Essex. 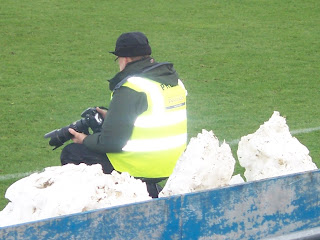 I settle down to a glass of Red and chicken fajitas. Mrs P is watching EastEnders. I borrow Sticky jnr’s Beats headphone and tune into my mate’s community radio show. He’s hosting an 80s alternative Scottish music show to celebrate Burns Night. He plays The Associates cover-version of Diana Ross’s ‘Love Hangover.’ I kid you not readers, it’s better than the original. The band’s lead singer Billy McKenzie was found dead in his father’s garden shed in 1997. He was only 39 years old.

I pull back the curtains on Saturday morning to discover a dusting of snow. I poach a couple of eggs and make a brew as Five Live report on folk abandoning their vehicles on the M6 close to Wigan. I quite fancy going to Shrewsbury, as it’s the closest ground to my house that I’ve never been to. A 170 mile round trip in snowy conditions might not go down too well with the good lady.

I have a chat with Murphy my green and canary-coloured budgie He’s excited at the prospect of his team, Norwich City, advancing into the FA Cup 5th Round. He predicts a goal rout against the Hatters of Luton at Carrow Road. 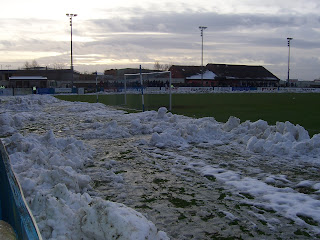 I’m just about to set off when Rammers drops me a call. Do I fancy going to Sincil Bank to watch the Imps and maybe chalk off Castle Rock’s Golden Eagle real ale house on Lincoln High Street. Only the latter appeals to me. I thank him for his tempting offer.

The drive to Nuneaton is fairly uneventful. Sat Nav was taking me down the M69. I prefer the M42 and A444. Five Live are at the Britannia Stadium for the Stoke v Man City FA Cup tie. Mark Pougatch is talking about Jonathan Walters’s unfortunate own goals and fluffed penalty against Chelsea. Any moments of misfortune are now referred to as ‘Having a Walters.’

I’m not pinning my hopes on the Attleborough Arms, that the ‘Lucky Dip’ section has thrown up in the Good Pub Guide, of being much kop. Most of the inns and restaurants I pass on the A444 look tired and tatty. Dinner is a major disappointment. The main eating room is large and spacious. It’s at full capacity for a Saturday lunchtime. The barman serves without any enthusiasm or personality. There are no guest ales on. I plump for a chip butty and wash it down with a pint of Stella. The chips are bloody awful. 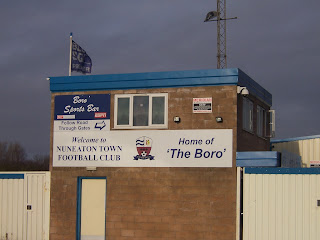 I swing into Liberty Way, home of Nuneaton Town. There’s a fair old crowd streaming into the industrial estate. I came 5 years ago when the Nuns entertained Stalybridge Celtic in the Conference North.

Nuneaton is a town with a population just shy of 80,000 in the county of Warwickshire. Due largely to munitions factories, the town suffered from heavy bombing by the German Luftwaffe in the Second World War. On the 17th May 1941 100 people were killed, 380 houses destroyed and over 10,000 properties damaged.

Braintree has a population of over 40,000. Notable residents include: Pineapple Dance Studios teacher Louis Spence and hardcore Rave band The Prodigy. 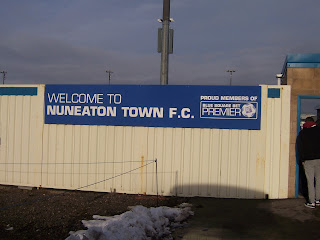 It’s £12 on the turnstile and £2.50 for a programme. I turn left and position myself at the top of some concrete steps. As modern stadia goes, I quite like the Triton Showers Community Arena.

I caught Nuneaton Town on a good day up at Hyde last season. I saw a virtuoso performance from troubled midfielder Kevin Thornton. According to a groundhopper I know from Nottingham, these days Thornton’s feet and sublime passing are dazzling folk at the Racecourse Ground in Wrexham.

This is my first viewing of Braintree Town. They are managed by former West Ham winger (358 appearances) and England international Alan Devonshire. Highly-rated striker Dan Holman is in the starting line-up. I saw him terror Gainsborough Trinity last season for his previous club Histon. 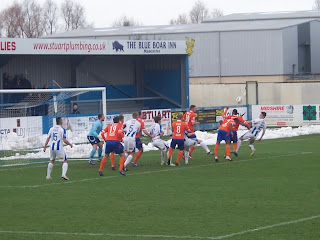 Braintree take the lead on 16 minutes with James Mulley heading into empty net following hesitation in the home defence. Nuneaton finally wake up and have an effort cleared off the line. They equalise on the stroke of half time. The Braintree keeper is cleaning windows from a corner and is ‘Having a Walters’, as an unmarked Simon Forsdick heads the ball home.

I remember the DJ playing a Killers track on my last visit; he obliges once again with ‘All These Things That I’ve Done.’ He follows it up with Simple Minds 1984 hit Waterfront. His only blemish is a crazy Rave song, which was probably a tribute to Braintree boys The Prodigy.

Sticky jnr will be having a Dickie fit at The City Ground. Nottingham Forest are 0-2 down to Italy (Watford). Mrs P will be removing all breakable items and covering up Murphy’s cage, in preparation for his return. 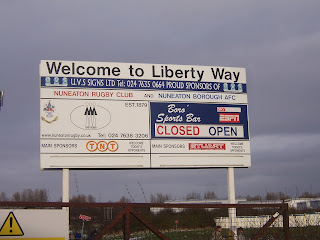 Former Long Buckby and Histon striker Dan Holman has kept the home defenders on their toes. His movement and touch are first class. He finds himself in space out on the left, there’s nothing really on. Holman knocks it out his feet and unleashes a shot with his left boot which finds the bottom right hand corner of the net. The boy is destined for a bigger stage.

On 60 minutes the visitors are awarded a free kick just inside their own half. Dean Wells spots Nuneaton’s ‘keeper doing a spot of gardening He hits a sand wedge that catches the wind, McNamara back pedals furiously, he looks like a drowning man as the ball sails over his head and just under the crossbar. It’s Beckhamesque and the goal of the season. 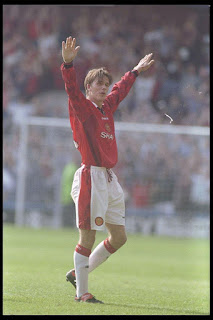 The Nuns make the final five minutes interesting, clawing a goal back through Delroy Gordon. Braintree score a fourth through substitute Dack to kill the game stone dead and give them a deserved victory.

I scroll down Twitter and notice the stand-out result of the day. Bloody hell, who’s going to break the news to Murphy that the Hatters have dumped the Canaries out of the Cup?


Man of the Match: Dan Walker

I've just found your very interesting blog. I'm also in Lincoln, also born in 1964!
I see you've travelled to a hell of a lot of lower league grounds. Do you have photos of them? I'm looking to get a football related project off the ground for which they might be of great help. Could you email me at stuartgoodacre@hotmail.com