I’m stood out on the patio in the gorgeous, manicured, established gardens of the listed Grade 2 stone built Halfryn House, in Abersoch. I’m with the Crazy Gang on our second tour of duty. It’s been a long, dark harrowing night.

I was awoken at 3am with a loud rumble. The foundations of the 100 year old house were shaking. Jesus Christ, Abersoch (or more importantly our bedroom) appears to be the epicentre of an earthquake. I roll out of bed and fumble for the light switch. It’s then that I notice him, sprawled out in his pit, with his Notts County shorts on, snoring his blooming head off. I shout at White Van Man to roll onto his side.

I punch out Mrs P’s telephone number and yawn out loudly, as I admire the breath-taking view of boats bobbing in the Irish Sea, early on Saturday morning. I break down in a flood of tears as Mrs P answers the call. “Are you missing me darling?” she enquires. “It’s not that love, I can hear Murphy (my budgie) tweeting and chirping in the background, can you put him on the phone for a quick chat?” Oh dear, the line’s gone dead. My signal appears fine. There must be a problem at Mrs P’s end. 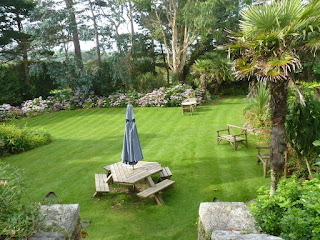 I walk back in the house. Half full cans of Stella 4% are strewn all over the lounge. That shirker, ‘Bruiser’ has never been a drinker readers. White Van Man is rustling up a full English breakfast for our group. He’s cheered up having caught up on Emmerdale on his iPad. Holly, ‘H’ from Steps and Nick arrive back at the house after their early morning swim.

I think back to yesterday. White Van Man hared up the M6, M56 & and the North Wales Expressway into Snowdonia National Park. Bruiser was on the money during the ‘Golden Hour.’ I washed down a succulent, locally-produced gammon with Snowdonia real ales at the Groes Inn. 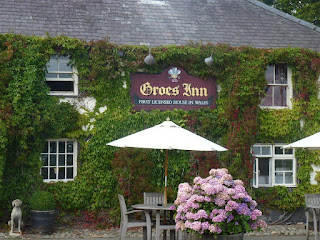 We were fleeced for £8 at the Conwy Valley Garden Maze. Farmer Jones must have seen us coming a mile off. It’s no Hampton Court readers. We didn’t even get lost. Its outstanding feature is the waterfall. Pete tells his girlfriend, Charlotte, that they turn it off at dusk. Bless her; she falls for it hook, line and sinker.

I’m still recovering from the previous night’s news that the best ever concert WVM has seen was Lionel Ritchie. I nearly choked on my burger and blue cheese when the big man dropped that little gem out at the Zinc Bar in town.

We nipped into St Tudwals Inn for a pint of Robinson’s ‘Dizzy Blonde.’ Michael Owen was dining in here last year with his family. I hope he didn’t stub his toe on a stone on the beach. Perhaps he’ll pop back for chicken in a basket to celebrate his proposed move to the Potteries. 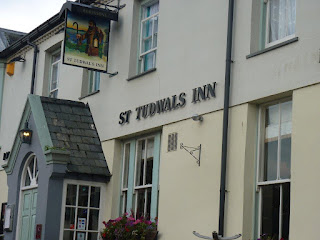 Saturday morning is spent in the bustling market town of Caernarfon. I notice on a newspaper stand that The Sun’s front page splash is reporting the earth shattering news that ‘Caribbean Queen’, Rihanna has smashed a table in a London restaurant. We explore Caernarfon Castle. Prince Charles investiture took place in the castle grounds on July 1st 1969.

The group splits at lunchtime. The majority head towards the island of Anglesey for a pre-booked ‘Rib Ride’ around the bay. ‘Bruiser’, WVM and Sticky barge our way through the door of Joe Corals and soon fritter away £20 in bets. 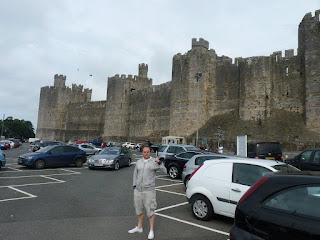 If they handed out Gold Medals for sniffing out chip shops then WVM would have accumulated Olympic world records. He weighs in with a tray piled high with fishcake, chips and curry sauce. A blackcurrant and soda is thrown down his hatch at a chain pub close to the castle.

West Ham United are dishing out a 3-0 thumping to Fulham. Llanrug is a short five mile drive away. Those pair of Muppets are threatening to make me walk home if the game ends 0-0. Regular readers know that ‘Hopper’ doesn’t do no score draws. I keep an eye out for suitable bed and breakfasts, just in case, as we cruise around the village. 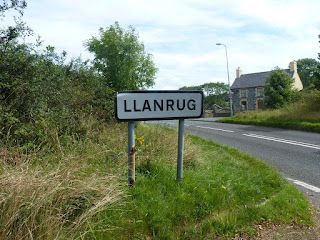 We’re redirected back up the hill to the car park of the Glyntwrog. WVM has a power nap. Sticky and Bruiser have another pre-match pint, eventually, after an unnecessary five minute wait. I have my first Hoegaarden Belgian wheat beer in donkey’s years.

We chance upon an Everton fan who points us in the general direction of the ground. WVM skilfully jay-walks over the A4086 as if he is negotiating traffic on Nottingham’s Upper Parliament Street.

The views looking out to the Snowdonia National Park are jaw-dropping. I must have visited over 500 grounds but nothing can compare with the backdrop that Eithin Duon offers. It’s a ridiculous £3 on the gate. I snap up the last programme. What a labour of love programme editor Gareth Hughes has produced. It’s stuffed with over 70 pages of facts, figures and news: a massive hat-tip to you Sir. 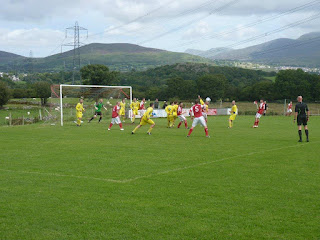 Pierluigi Collina has come out of retirement for the day as Llanrug elect to kick with the wind. The first moment of controversy comes after two minutes when I happen to put my foot through a bunch of thistles, much to the amusement of my pals.

‘Bruiser’ is already giving me grief, so I decide to take my customary stroll around the ground. Dugouts are unusually on both sides of the ground. The changing rooms are at the far end. Stone walls are a wonderful and usual feature at a non league ground. 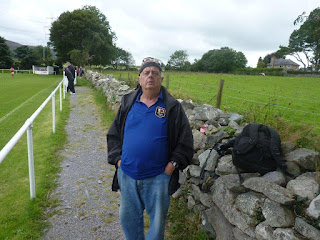 I bump into a guy who’s wearing a bandana and sunglasses. It turns out to be the coach driver of Llangefni Town, who goes by the name from his CB radio days of ‘Red Onion.’ What an engaging chap ‘Onion’ turns out to be. He talks about the demise of the team and even digs out a couple of programmes for me from out of his rucksack.

Suddenly my phone goes off. Perhaps Mrs P has her signal back. Oh bloody hell it’s WVM, what the heck does he want. He’s roaring down the phone that there is a piece in the programme about our visit today. What a lovely touch. 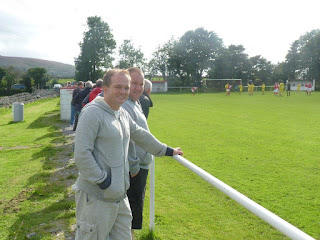 I’m jumping up and down and waving across the pitch at those two clowns when Llanrug open the scoring on 14 minutes through Ian Burgees – no relation to The Charlatans lead singer Tim Burgess. The gulf in class is evident by half time as the visitors struggle to cope with the stiff breeze and sloping pitch.

Their heads are bowed as they troop off to the dressing room 3-0 down. I bump into ‘Bruiser’ in the toilets (this is not a usual occurrence). He shares out his Kit Kat bar (not in the toilet). I introduce myself to the Club officials at the green-painted wooden tea hut. 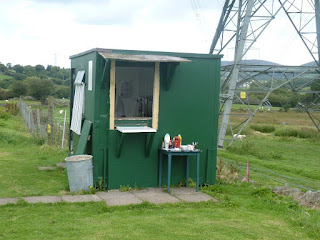 What a charming and engaging bunch of chaps they are. They treat me to tea and a complimentary tray of chips. I promise to file my match report later in the week. I stand with the lads for the final twenty minutes. A ball catches the wind and heads towards WVM. He sticks out his Winfield trainers from Woolworths, the ball cannons off his foot and hits a lady official straight in her chest. That’s going to hurt in the morning.

Llanrug score the goal of the game on 72 minutes through Gareth Eiffon Jones. The visitors deservedly score a late consolation goal three minutes from time. WVM is crying like a baby that Collina has played 4 minutes injury-time; he knows ‘Hopper’ won’t leave until the final whistle. 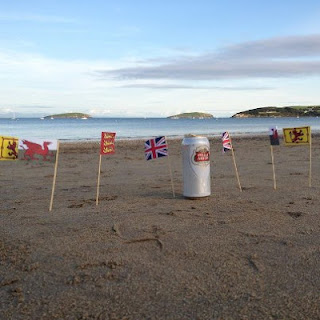 I take one final look at that stunning view. WVM tells tales, on the journey home, of getting whiplash in Riga from looking at all the totty and how he once applied for a job as a window cleaner in Amsterdam.

The night is spent on Abersoch Beach. We set up our own disco and are joined by vodka swilling underage drinkers from Pwlhelli. It’s not a pretty sight watching ‘Hopper’ dancing to ‘Crank That’ by Soulja Boy. I turn in for bed at 2.30am; tonight I’m the one snoring. 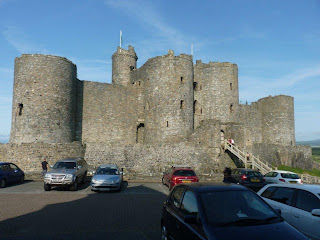 Sunday is spent on an all day bender under sun drenched blue skies. On Monday we visit the delightful surroundings of Harlech Castle and the quaint little seaside town of Barmouth.

Man of the Match: Leroy Rosenior (private joke)
Posted by Sticky at 8:57 PM

It looks like a great castle. Well quite small but it is a great place.