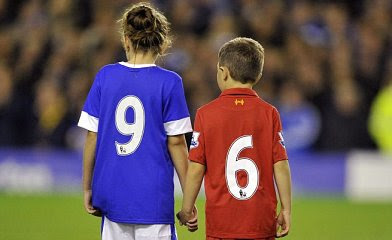 It’s 1.45pm on the 15th April 1989. I’m stood on the Kop at Hillsborough in Sheffield. Nottingham Forest and Liverpool are set to cross swords in their second consecutive FA Cup semi-final. I stare out towards the Leppings Lane end. The central pens are packed to the rafters, whilst there are huge gaps in the side pens.

Four minutes into the game Peter Beardsley thumps a shot that cannons back off the woodwork. There’s a surge in the central pens. Fans begin to clamber over the ten foot high spiked fences. Nottingham Forest fans start to boo and jeer; suspecting it to be a pitch invasion.

Supporters are being winched up to the upper tier. Something has gone badly wrong. Referee, Ray Lewis, on police advice, stops the game at 3.06pm. The PA system asks for any doctors or paramedics in the ground to make themselves known. 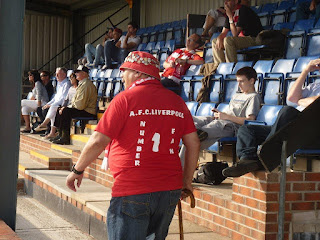 Liverpool fans are applauded by the Forest fans as they break up advertising hoardings to use as makeshift stretchers. The walk back to the car is in silence. We all fear the worst. People crowd around transistor radios in an attempt to gather more information. We stop off at Woodall Services on the M1 and join the huge queue of people phoning home their loved ones.

The Football Association had allowed over 50,000 people to be shoe-horned into a stadium whose safety certificate had expired. Margaret Thatcher and her vile Minister for Sport, Colin Moynihan, played their part in a huge cover up. I still have my “F**k off Moynihan” T-shirt in the loft. Football fans in the Eighties were tarred with the same brush and treated like second class citizens.

Twenty three years later and the truth is out. An independent report has revealed that 41 people had the “potential to survive” after the 3.15pm cut-off time. Evidence was also uncovered of a massive police cover-up. 116 out of 164 police statements were allegedly altered to change comments criticising the South Yorkshire Police. 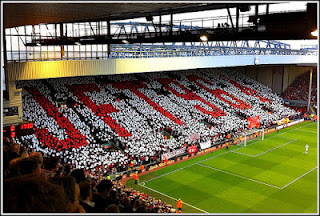 96 innocent people lost their lives in the Hillsborough Disaster due to a catalogue of errors. It’s a victory for the tireless campaigners and relatives of the deceased. Hopefully the people accountable for that wretched day can be brought before the courts.

It’s Friday lunchtime. I’ve abandoned the ‘Rolls Royce’ on Farmer Street in the village of Bradmore, in South Notts. I spot a red Number 9 Premier bus in the distance. I hop on and pay my £4 return fare to Loughborough. It’s Part Three of the ‘Real Ale Trail.’ 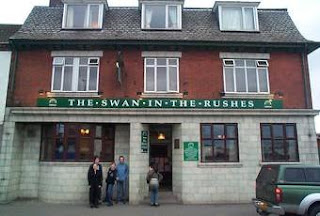 Seven hours later I’m staggering through the gates of Plumtree Cricket Club for ‘The Skipper’s Presentation Evening. We’ve pounded the streets of Loughborough and drank the town dry. The Swan and Rushes and the newly opened Blue Monkey pub, the Organ Grinder, are the pick of the pubs. I manage a Diet Coke and a few slurred conversations with folk. I recall a pot of tea for one accompanied by the Million Pound Drop before hitting the sack.

I’ve a big day out planned today. My junior football team have no game and I intend to make hay. Mrs P kindly drops me off in Bradmore to collect my car. I shoot into West Bridgford to pick a few presents up for Mrs P’s birthday.

Radio 5 are reporting that Manchester United’s Scottish international Darren Fletcher may play his first game for over 9 months following his battle with colitis. Sadder news on the horizon though is that it’s the final ever ‘Sausage Sandwich’ game on the Danny Baker Show. 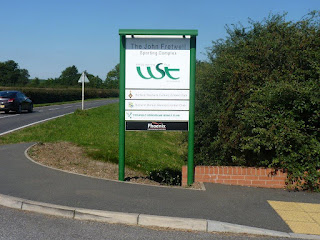 I hit the A60 and head up towards Mansfield. I’m hooking up with my man in the North, Mickey Gould. I’ve arranged to meet him at the John Fretwell Centre, close to the old mining village of Warsop. The reception on Five Live is bloody awful. I tune into Radio Nottingham. It’s a big mistake readers; they’re playing the awful ‘What a Feeling’ by Irene Cara.

I spend an hour viewing a game with Mickey. The tight sod hasn’t brought any ‘tuffees’ with him. I treat the owd codger to a cup of coffee in the plush clubhouse. It’s just gone 11am and already a young couple are tucking into a couple of pints of lager. I say cheerio to Mickey and drive towards the A1, ironically passing through the village of Spion Kop. I notice a few billboard posters advertising that 70s punk band Sham 69 are to play in the area.

The traffic on the A1 is horrendous. There are lengthy queues between Junction 35 and 38. I’m going to miss my lunchtime pint at this rate. A wooden sign in a field off the hard shoulder says ‘Prepare to Meet God.’ I could do with him right now, to disperse all this traffic. 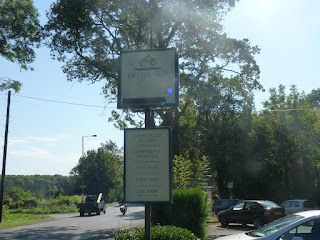 I finally chance upon a decent boozer in the village of Owton. I find a vacant picnic table in the sun-drenched beer garden and wash down a cheese and pickle sandwich with a pint of Kronenbourg 1664.

I pull into Welfare car park of Askern Villa FC shortly before 3pm. Askern is a village in the Metropolitan Borough of Doncaster with a population of over 5000. It was a victim of the Conservative Party’s vendetta against the mining community. The coal mine closed in 1991. Askern’s Sports Ground has been vandalised four times in the last 12 months. Copper piping has been ripped out and the kitchen burnt down. Over £40,000 damage has been caused. It breaks your heart. 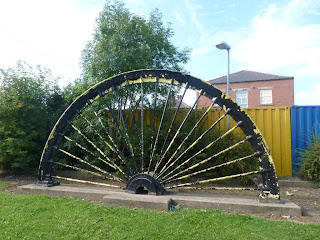 A group of young lads wearing Doncaster Rovers and a Wales strip are playing three-and-in outside the Welfare. I walk past what must be the final cricket game of the season. I pay £4 on the gate. Unfortunately they’ve run out of programmes.

The ground is railed or fenced off on all four sides. The nearest touchline to the entrance has a small seated stand. A covered terrace on the opposite side splits the two dug outs. The pitch looks in very good condition.

AFC Liverpool was formed in 2008 by fans disillusioned with the Premiership ticket pricing structure and the so-called ‘39th game’, in which Premier League games would be played in different parts of the world. The Club adopt the same colours as Liverpool FC and play in the NWCL Premier Division. 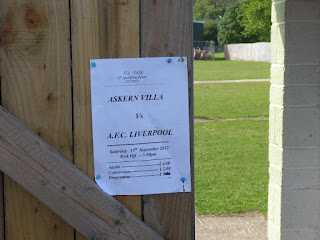 I stand on the furthest side of the ground. Each Liverpool player has the number 96 printed below the back collar with 15.04.89. After 6 minutes of frenetic action their supporters burst into two minute applause. The visitors are well on top and attack with pace and speed. The Villa ‘keeper is kept a busy bee. Totally against the run of play Askern take the lead through Jay Rollins, after some poor defending.

I’ve serious concerns for the health and well-being of Liverpool manager Paul Moore and particularly his assistant Stuart Humphreys. They are both at bursting point. James Buckley increases their blood pressure by thumping an effort that bounces back off the foot of the post.

Parity is restored on 20 minutes. The impressive former Liverpool Academy player, John Lawless, wriggles his way down the left hand side before brilliantly crossing the ball to the back stick to leave Ryan Wilkinson the simple task of heading home. 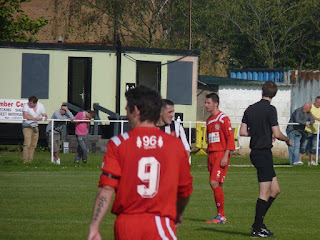 The guy in the Askern nets is having a torrid time; he couldn’t catch a cold today. He fumbles, parries and drops the ball from numerous attempts on goal. Liverpool’s Francis Barry smashes a shot off the upright as the visitors go in at half time wondering how this FA Vase tie has not been put to bed.

The cricketers have gone in for tea, so I decide to take a mosey around this old pit village. I’m chased out the ground by the raffle ticket seller who asks me for my numbers. After rifling through my pockets in a desperate attempt to find the winning strip I find that I’m one number out.

I amble past a guy sporting a black eye, sparking up a cigarette. I nip into the Welfare for a nosey. One or two blokes are propping up the bar as the half-times come rolling in. Mad Dog’s Gillingham have started like a house on fire against the Pirates of Bristol. The main room in the Welfare has two full sized snooker tables, a pool table and some gaming machines. 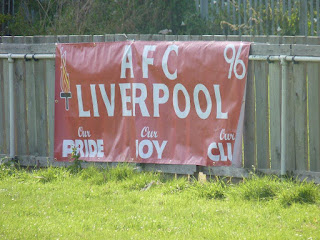 I look up the road towards the local Londis. I think I’ll give it the swerve, as a huge gang is congregated outside the shop. I get chatting to the guy with the black eye, on the way back into the ground. Turns out he’s the first choice ‘keeper who suffered an eye injury during a game in midweek. He’s an affable chap, who very kindly walks back to the changing room to pick me up a programme that’s lying around.

AFC Liverpool soon take the lead. The Askern ‘keeper is cleaning windows as a corner comes sailing in; their huge Number 4 Anthony Brown smashes home a loose ball into the roof of the net. Askern have an effort cleared off the line and also strike the woodwork.

John Lawless wraps up the game with a coolly taken spot kick on 84 mins.

Man of the Match: John Lawless

Brilliant post,well written with passion, not like those other journos.

It sounds like a nice game. I would like to watch it. and I am glad to hear that LIVERPOOL did great.