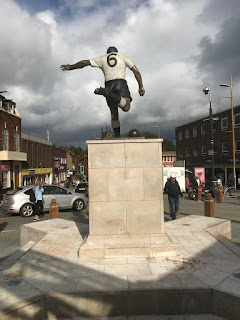 It saddened me to see Paul Gascoigne up before the beak at Teesside Crown Court. 'Gazza' wore a haunted look for the TV cameras, despite being found not guilty of sexually assaulting a woman on a train. I prefer to remember the England v Czechoslovakia game at Wembley and 'Italia 90' where his heart was broken and tears streamed down his cheeks, when a yellow card was waved, after a desperate lunge, which would have ruled him out of a World Cup final. My spine tingles and goose-bumps explode as I think of that moment. I was holed up in a pub (surprise surprise) in Cornwall at the time.

It's been a quiet week on the football front. I'm not an easy man to live with when rain is teeming down on the French window and football is a no-go. I take a second look at Keyworth United U19s. What a beautiful game of football they play, on a still night at Platt Lane. Teversal U19s are blown away with a high tempo display of fast-flowing football that they were unable to cope with. It was even clearer to see when sporting a new pair of short-sighted spectacles - and yes, I did go to Specsavers. 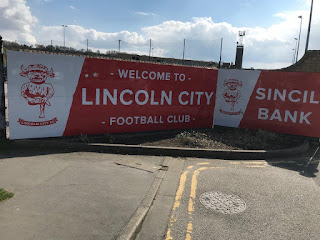 I shoot out of the fire exit at 4 p.m. on the dot, on Friday afternoon. Newark can be a bugger to drive through at any time of day; least of all in rush-hour traffic. I sail down the by-pass without any incidents; the traffic flows freely. The same cannot be said of Bracebridge, a suburb of Lincoln, where it's bumper to bumper. There is a funfair on the South Common and a football match on at Sincil Bank; both are on the same evening. Matters aren't helped by Steve Wright's 'Serious Jockin' - I'm seethin' no 'g' - see what I did there?

Another bumper crowd is expected at Sincil Bank to watch Lincoln City, a side in transition, since 'He Who Must Not Be Named' and his brother, upped sticks for West Yorkshire. I park up at the back of Robey Street, where my Nana spent her final few years. I slog it up the High Street. The city is alive with supporters hanging out of pub doorways, chain-smoking and downing pints. I hate boozing prior to a game; always have. I can think of nothing worse than watching a match through a beer-fuelled haze. Hurling abuse at officials and opposing fans is not my bag (unless they are from D***y). 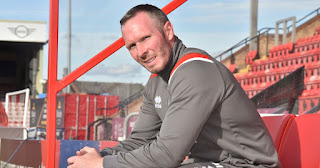 It's pasta and diet Coca Cola for Sticky Palms at the super friendly Ask Italian restaurant, which is housed on the Brayford Waterfront, opposite Wagamama. I push the boat out and have a honeycomb cheesecake for dessert. I'm full to the brim as I turn off High Street onto Scorer Street, the birthplace of Lee Chapman, who scored over 200 career goals (how many times have you told us that, Sticky?).

I'm seated in the Stacey West Stand, named after two supporters who perished in the Bradford Fire Disaster in 1985. 'He Who Must Not Be Named' (now Huddersfield Town's manager) had arranged, before his hurried departure, a special discount for teachers and school employees for tonight's match. Over 9,000 fans are expected. 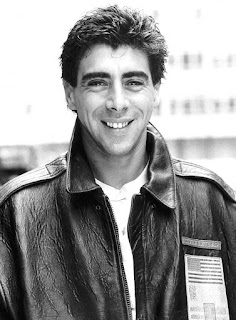 I love the 45 minutes pre-amble before the game. The Lincoln DJ is in fine form. He plays 'Rhinestone Cowboy' by Glen Campbell and The Courteneers, 'Not Nineteen Forever.' I said to a mate at work that this game has got a draw written all over it - as long as it isn't 0-0 - as I don't do 'em.

There are loads of teachers here; I can tell, as they've all got beards and look cross - can't speak for the women. Three or four squeeze past me with young kids in tow and Grandad. The game kicks off with 'The Lincoln' attacking the Stacey West End. The first thing I clock, just like I did at Rotherham and Blackpool, is how big the opposition are in height and stature. 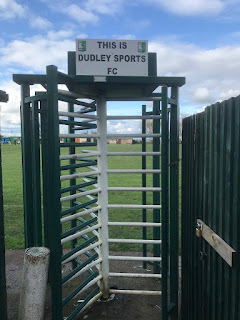 New incumbent, Michael Appleton, has changed the Imps' style of football They play out from the back and through the midfield. The '617 Squadron' might as well discard with the air raid sirens used during set-pieces and corners when Raggett, Waterfall and Matt Rhead wore 'Our' colours.

Shrewsbury don't look particularly interested and we can't break them down. It's a lacklustre, stalemate affair in the first half, with little hope of anything changing. Grandad, next to me, rummages around in his rucksack and unearths a Tupperware container full of homemade flapjacks. Everyone is offered one on our row except for Sticky Palms. The greedy grandkids have a second helping. I don't speak to Grandad for the rest of the game; even when he makes a coaching point.

The second half is as dull as dishwater as 'The Lincoln' play at a slow tempo and don't shift the ball quickly enough. The game comes to life on 75 minutes when the flame-coloured haired Imps centre back, Cian Bolger, sees the red mist, out on the far touchline. The card is also Red. Lincoln 'keeper Josh Vickers is called into action on several occasions as we run the clock down. 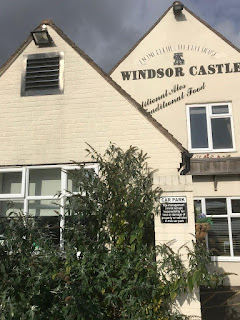 I'm fuming that Bolger got sent off, as I walk down Queen Street, reflecting on the game. I turn onto the High Street as folk pour into the Golden Cross pub. My mood darkens even more as I switch on Radio 2, only to hear 'back in the day' Manc-born DJ, Gary Davies, (ex Radio 1) waxing lyrical about some Indy band - this is the bloke that spun Five Star and Milli Vanilla in the 80s whilst a music revolution was happening, right under his nose (and trust me he has a big 'un).

I have an awful night's kip. Cheese and biscuits for supper was a bad idea. I dreamt that Gary Davies got John Peel's slot on Radio One. I persuade Ms Moon to come out for the day to Dudley. One of our favourite pubs is Windsor Castle, in Lye, just a few miles away from Dudley Sports' ground in Brierley Hill.

It's a pint of pale ale from the Printworks Brewery and a latte for Ms Moon as we enjoy a bacon and brie baguette and a fish finger sandwich for lunch. Traffic was unkind on the way, so the schedule is a tad tight. 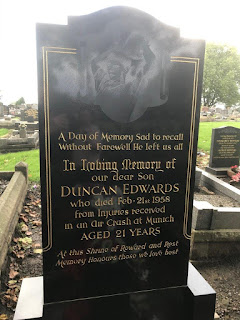 After a few wrong turns, we find Dudley Cemetery. On February 6th, 1958, Flight 609 crashed on its third attempted take-off from Munich Airport in West Germany. Manchester United players, nicknamed the 'Busby Babes', were aboard the flight. 23 people out of 44 passengers died. One of which was Dudley-born Duncan Edwards, aged just 21 years old. They only stopped in Munich to refuel after flying in from Belgrade. More than 5,000 people lined the streets for his funeral. My father was a cub reporter for the Daily Express and based in Manchester. He flew out to Munich to cover the story.

Ms Moon finds his grave and waves me over. I become upset when I notice that Duncan's sister died at just 14 weeks old. Their parents were to remain childless for the rest of their marriage. My mood remains sombre as we park up and walk into Dudley town centre. The statue of Duncan Edwards is remarkable. We walk back to the car in silence.

Dudley is a market town in the West Midlands with a population of 80,000. Well known from the town include: Duncan Edwards, Sam Allardyce and the comedians Sir Lenny Henry and Norman Pace. 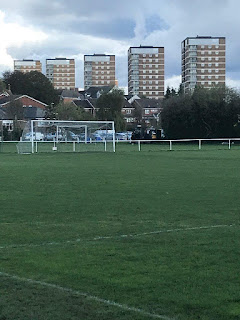 It's £5 on the gate at Dudley Sports; there's no sign of a programme. I love the ground that's dwarfed by the high-rise flats in the distance. Who signed-off approval to build such a monstrosity? We grab a coffee and tea at Kath's Cafe and discuss orange twirl bars that are in short supply.

There seems to be no lost love between the two dugouts. It's a local derby, but the disrespect and ill-feeling is more deep-rooted than that. Dudley Sports could be 3-0 up in the first ten minutes. Due to shanked efforts, blocking and misfiring they aren't. 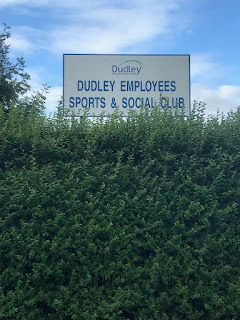 The Cradley Town management team are a pair of foul-mouthed muppets. Their demeanour and behaviour are stereotypical for this level (Step 6), One chews gum furiously and rushes his fingers through his wax-ridden hair, whilst his chrome-domed assistant brags to all and sundry how good he was as a 'Pro' and that he doesn't talk to 'Bell Ends' that haven't 'played the game.' - a reference to the opposition bench.

Cradley take the lead from the spot after an uncontested stonewall penalty is awarded. The rest of the half is scrappy and devoid of any quality. I take a stroll around the ground at the break and take a few snaps of the stand on the far side of the ground. "Oi, are you the blogger?" shouts out a bloke. I get chatting to a couple of Cradley fans. Apparently, the pair of clowns in charge today are for One Day Only - a new management team is to be appointed tomorrow, Cradley have already used 60 players this season. 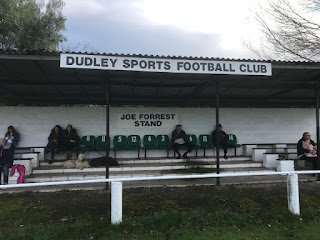 The second half ends in tragedy. The Dudley Sports No.10 rides a tackle but lands awkwardly and gets his studs caught in the turf. The whimpering cry and howling I've heard a few times suggest an ACL injury. The poor lad is in distress and in need of medical attention. There's little sympathy from 'Our Man' whose hair is plastered with putty or wax. "Can't we find a stretcher or carry him off?" There's little regard for the player's welfare. The lad could be self-employed, married with two kids.

An ambulance is called. The game is over for us. How could you possibly continue after such a sickening injury? But for some the result is more important!

Man of the Match: Dudley No.10