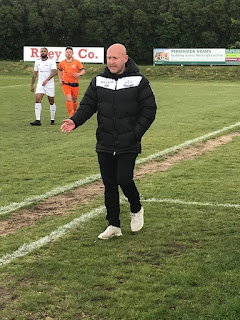 'So, Sticky, why did you leave Keyworth United when the Development team was playing so well?' This is a question I've had to bat-off when asked by so many people I've bumped into in the last few months. It certainly wasn't results related - we were on a six-match unbeaten run at the time. In my final two games at the helm, we beat League leaders Ruddington Village 3-1, on their own patch, and knocked out top three side Stapleford Town in the League Cup, 5-3, after being 3-1 down with 25 minutes remaining, to reach the semi-finals.

Behind the scenes it was utter chaos. I will never be controlled or allow others to pick MY side for me. It became clear that I was unable to 'work' under these conditions and felt it best to leave, rather than to let it fester. I resigned 24 hours before the Newark Flowserve game, on the condition that the lads weren't told until after the match. I had a great relationship with First Team Manager Ian Marley and wish him well for the future. It has broken my heart to see the lads lose 5 games out of the last 6 since my departure. They gave their all and played for the badge in every game I managed. But I will leave the team in the hands of those who know best. 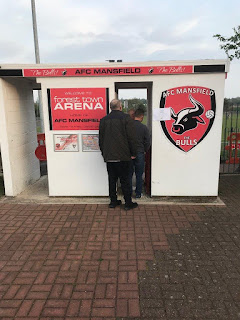 It's Tuesday evening and I'm driving down Burton Road in Carlton. I turn onto Gedling Road, before taking a left-hand turn onto Westdale Lane East. I've been tipped the wink by Ms Moon's best mate, Jill, that 'Phil's Plaice' is the best chippy in the vicinity. It's up against some stiff competition: Oceans, Plains' Fish Bar and the Carlton Fryer have passed previous scrutiny with flying colours.

The staff behind the counter are so friendly. We discuss Line of Duty (not a Scooby Doo, need to binge watch from series one) whilst a fresh haddock fries in the spitting hot oil. It's £5.15 for a fish 'n chip special - a tad on the pricey side. I wolf it down on a nearby cul-de-sac. It's marked with an 8 out of 10. We'll have a re-visit for kebab meat and chips after a night on the sauce in Nottingham. 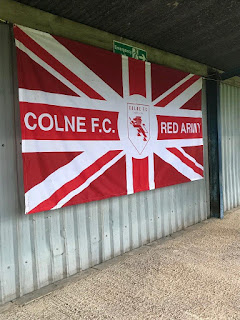 Also on tonight's menu is an under 21 Champions League final, at AFC Mansfield, in Forest Town, between Southwell City and an unbeaten Handsworth Parramore, from Sheffield, where blog legend budgie, Murphy Palmer, was born. I coached against their under 19 side a few years ago - they were a horrible lot. Southwell defend stoically and catch Parramore out on the counterattack to take the lead, and again shortly after with a cracking finish to make it 2-0. The South Yorkshire team let themselves down and are reduced to ten men when some Muppet tells the ref to eff off. They pull a goal back and throw caution to the wind, only to be caught out again. Southwell, at the end of the game, get into a huddle and loudly sing 'Championy'

Wednesday night is to be my penultimate game of a stop-start season, due to coaching from October until the end of February. I drive across the top of the A52, out Ashbourne way, towards the Staffordshire town of Leek. There's a Northern Premier League Division One West playoff game between Leek Town and little old Colne FC from up in the hills of East Lancashire. Ms Moon and I love Colne; their manager Steve Cunningham is a passionate man, who is devoted to the beautiful game. 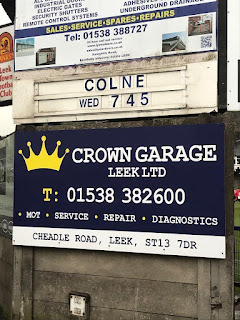 I chance across a pub called the White Lion, which is adjacent to Harrison Park, the home of Leek Town. The pub advertises homemade pub grub; a unique selling point in an area full of soulless Marston's pubs with mass-produced food and zero atmosphere.

Colne Manager, Steve Cunningham, is tucked away in the corner of the pub having some pre-match tucker. I would have said hello, but he's with some staff/committee members, with his mind firmly fixed on the game. The chit-chat is only of football. He tries to remain calm, chilled and relaxed, but inside his stomach will be churning with butterflies. The landlord of the pub very kindly allows me to leave my car at the pub. I say thanks to him as he patrols the car park, preventing fans from dumping their vehicles there - "the food was superb by the way mate." 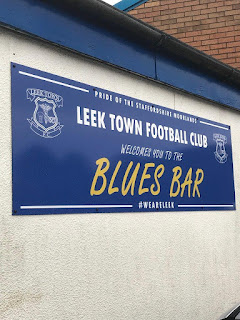 Harrison Park is a classic old school ground. I do a full circuit, passing the cheery, visiting fans who have made the 140 mile round trip from Lancashire on a school night. I take a pew in the stand with a bird's eye view of proceedings. I really want Colne win. I've seen them lots of times and like the way they play the game on the deck.

The Leek Town DJ, wins hands down PA Man of the Year. He plays a complete Northern Soul set, not seen since Wigan Athletic v Nottingham Forest back in 2013. Colne concede within 15 minutes to a well-worked goal. They always look a threat with 20-year-old striker Alex Curran leading the line. They equalise on 35 minutes with a rocket of a left-foot shot from Reece Webb-Foster and have another goal chalked off for offside.

We draw for breath at half-time and enjoy some more toe-tapping keep the faith Northern Soul. Colne continue to play the better football and have another goal disallowed which looks harsh on first viewing. It's starting to get chilly as the ref blows on 90 minutes. In extra time Colne are out on their feet, having played out a Lancashire Cup Final 48 hours earlier. They have already been reduced to ten men after an alleged elbow.

The most extraordinary incident happens with seconds remaining. A Leek corner comes sailing in from the right, it's headed goalwards, Colne 'keeper Hakan Burton makes a spectacular save, only to see the rebound fired home by super sub Michael 'he scores goals' Grice. Steve Cunningham is on his haunches and totally devastated. An idiotic Leek fan jumps the advertising hoardings and races up the pitch to confront the visiting supporters. He's pushed to the ground by a Colne player, who is shown a straight Red card by the referee. It's an astonishing end to a captivating evening of entertainment with passion showed by both teams. I'm gutted for Cunningham, who seems a genuinely nice guy. 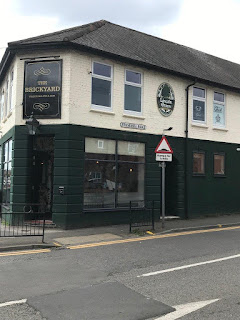 Friday night soon comes around, and boy oh boy am I looking forward to a long weekend before spending three days holed-up at a Hilton Hotel, in Dunblane, for a sales conference. I have a quick pint of Rattlesnake craft ale at The Brickyard - I would have had a second one, but there's just one lass behind the bar at 6:30pm on a Friday - I send a moaning tweet to Lincoln Green Brewery. I nip next door to 'Spoons for a pint of Elsie Mo from the Castle Rock Brewery at £1.49 with a 50p off CAMRA voucher.

I nip down Carlton Tesco first thing on Saturday morning. I've fallen out with them to be honest since the announcement last Sunday that the butcher's counter will be closed three days a week. I love a chinwag with Sandra whilst she slices up my garlic sausage, corned beef or haslet. Ms Moon fancies a sausage sandwich. I notice a new range of Aberdeen Angus beef ones - Tesco's finest too. I stroll into the kitchen as the good lady fires up the grill. She empties the shopping from the bag before blowing a gasket: "what the bloody hell are these sausages? I said pork." We don't speak for an hour, as Ms Moon misses out on breakfast. For the record the sausages were awful;  I didn't tell her though; I ate them through gritted teeth. 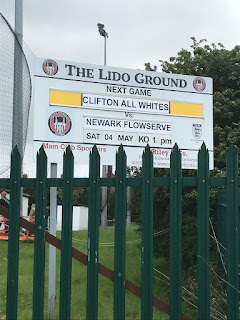 The Taxman rings the doorbell at bang on midday. It's gone 12:15 by the time we depart due to Sticky Palms sorting some bedding plants out. Google Maps suggests it'll be nip and tuck whether we'll make it in time to Clipstone for the EMCL cup final. I'm not banking on The Taxman to step on the gas as he drives slower than Driving Miss Daisy.

We hit the old coal-mining village of Clipstone, up in north Notts, at 12.59 pm, just missing out on kick off. It's £5 on the gate (£3 for The Taxman, the old codger). I buy a couple of raffle tickets. I bump into loads of folk I know: Tony Hay is here from Gedling MW, Big Glenn from Radford and Dave 'White Van Man' from Shepshed. 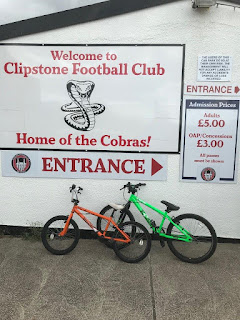 The pitch looks bobbly and rutted despite it hosing it down for most of the week. We go for a wander and say hello to my favourite manager of all-time, Lord James Turner esq, who now resides off The Avenue in West Bridgford. There's been little progress on the growth front of the hipster beard that showed up in Selston a few weeks back.

Sorry lads, but the game is absolutely shocking. Maybe it's stage fright or pitch conditions, but I can't talk it up. Clifton will be happy to still be in the game on 90 mins as they have posed little goal threat, with the opposition twice having seen efforts bounce back off the woodwork. 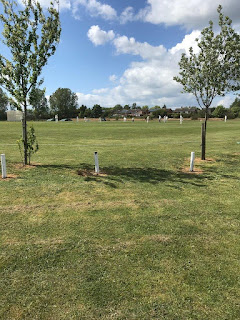 I seek further entertainment at a cricket match being played on the Welfare adjacent to the ground. There's a wicket at the cricket as a portly batsman tries to swipe an off-spinner into orbit. God, what would I give for a goal - Sticky doesn't do 0-0s. Clifton, to a man, have defended for their lives. Martin Ball has been outstanding with last-ditch tackles; putting his head in where others fear to tread.

The game goes to penalties. Two of Clifton's first three spot-kicks end up in a neighbouring fairground, landing on the coconut shy. Newark deserve to win, but then again they attract players from far and wide, so Clifton should be proud of their performance, pushing The Highwaymen to 120 minutes of football without conceding a goal.

See you next season folks. Thanks for reading 'em. Back in July.

Man of the Match: Martin Ball
Posted by Sticky at 7:27 PM