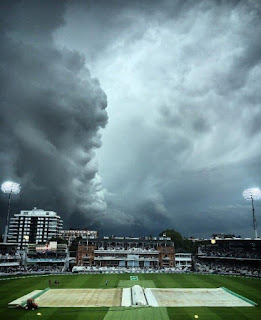 Sunday morning is spent weeding in the garden, reflecting on a wonderful day out in Bristol and Clevedon yesterday. Ms Moon and I enjoy some fine dining and quality cuisine at the Hammer and Pincers, Wymeswold, in the Charnwood district of Leicestershire. I fire up the laptop on our return to HQ and knock out the Bristol City v Nottingham Forest blog, sat in a sun-drenched garden, with Pickering's Gin for company. 3,000 hits show there's life in the old blog yet, and room too for the forthcoming vlog (software and instructions downloaded, training to commence shortly).

On Tuesday teatime I sink the best pint of Bass, ever, at one of my old haunts, the Wysall Plough - I tell Ms Moon it's for research purposes. Wysall is a 'Thankful Village' - 12 men were sent to War in 1914 and returned home safely. There are 52 other Thankful Villages in England and Wales, compare this to only one in France. The villagers in Wysall raised £118 as a thanksgiving celebration and bought the church their first clock in 1920. 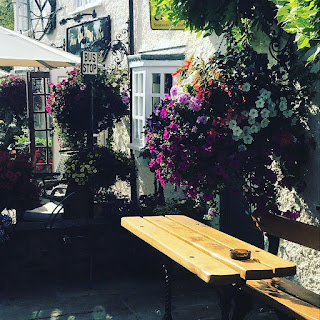 I make the short journey over to the Packe Arms, in Hoton, to hook up with White Van Man and Big Ed, for tea, before racing over to the Dovecote to see Ilkeston Town narrowly defeat Shepshed Dynamo 3-2 in the Midland Football League. The following evening is spent yet again in this neck of the woods, watching Quorn AFC with an old mate, Bobby Oldham. The visitors, Long Eaton, are well-beaten 4-2. 45-year-old Russell Hoult, with 445 professional appearances under his belt, has the 'keeper's gloves on for Quorn.

Early on Friday evening I sink a couple of pints of Shipyard at the Woodthorpe Top 'Spoons on Mapperley Tops, ironically adjacent to the war memorial. In another twist of fate, an ex-soldier is proudly showing his friends a phone clip of him playing the Last Post at a ceremony. I spot an astonishing photo of Lord's cricket ground on social media, where England and India have been dodging the showers for most of the day. 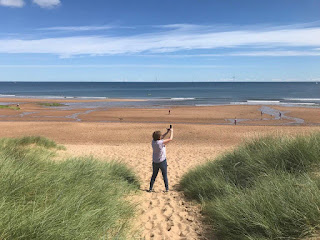 I'm like an overexcited little kid at Christmas. Sticky Palms is wide-eyed and bushy-tailed before the crack of dawn on Saturday morning. I'm singing 'I'm So Excited' by the Pointer Sisters in a high-pitched silly voice that wakens Ms Moon from her slumber. I shoot down to Netherfield Costa and make sure the princess is fuelled to the brim with a Latte, as she can be a tad irritable and tetchy first thing in the morning.

I'm raising money for Help for Heroes this season to commemorate 100 years since the end of the First World War. It's £1 per goal at each new ground visited and £5 for each Thankful Village I visit. As Dermot O'Leary spins 'Enjoy the Silence by Depeche Mode we roll into Norton Le-Clay and nearby Cundall - both sleepy villages in North Yorkshire, who saw all their armed forces return home in 1918. 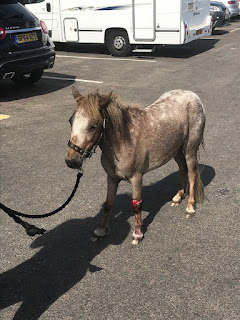 A grouchy Ms Moon ticks off another Costa at Northallerton services as an angry wasp chases a petrified Sticky Palms around the car park. By 11:am we're parked up on the seafront at Seaton Sluice, just a few miles down the road from Blyth.

In the car park we chance upon a council warden, a member of the public and a young chap from the travelling fraternity having a set to about the well being of a Shetland Pony, who has a nasty flesh wound on his leg. The lad claims to have taken the pony into the sea, so the salt can cleanse the wound - it does look suspicious, but we don't want to get involved, with threats of calls to the police - it's a very strange and delicate situation. 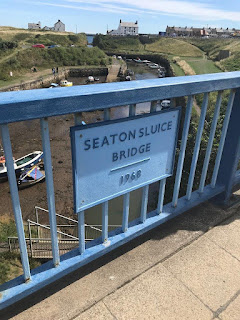 We wander down the beach and clamber up the sand dunes towards the harbour and more importantly the Kings Arms that overlooks the bay. It's Seaton Sluice Harbour Day. All monies raised are going towards the RNLI. There are fairground rides, bouncy castles, face-painting and a band warming up at the carnival.

The pub is bustling with folk. I've arranged to meet a Nottingham-based Blyth Spartans fan called Kevin Marshall - we have mutual acquaintances, but have not met in person before. It's a bit like a blind date. Kev and his other half went to Edgar Street in Hereford to watch Spartans last week, so is a man after my own heart. Ms Moon and I enjoy fish, chips and mushy peas. Kev and I quaff a pint of Abbots ale and an 'Inspired' from the Hook Norton Brewery. 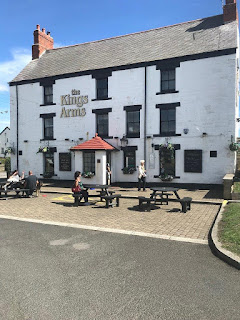 We stick the car on a side street called Arcadia Terrace in Blyth. Ms Moon says she'll remember the name as Election Day by Arcadia (a Duran Duran project) is one of her favourite tunes. Talking of Toon, Newcastle have been beaten 2-1 by Spurs at St James' Park.

Blyth is a town that lies on the coast of Northumberland with a population of 37,000. The main industries that helped the town prosper were coal mining and shipbuilding. The Royal Navy's first aircraft carrier, HMS Ark Royal, was built here in 1914. Notable people with connections to the town include: Captain Richard Been Stannard, recipient of the Victoria Cross, Dire Straits singer Mark Knopfler and Brighton Hove Albion defender Dan Burn. 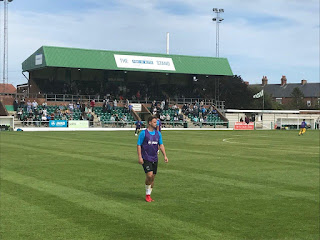 Blyth Spartans were founded in 1899 and play their home games at Croft Park. They are well known for their famous giant-killing feats in the FA Cup. In 1978 they reach the 5th round of the FA Cup. Notable former players include: John 'Budgie' Burridge, Graham Fenton, Marcus Maddison and Alan Shoulder.

We take a pew perched up high in the Port of Blyth Stand. It was £12 on the gate, £2 for a programme and a further £2 to gain access to the stand. I bump into a groundhopper who supports Dagenham and Redbridge. He arrived in Newcastle in the early hours of the morning and spent four hours in the casino, so hasn't had any sleep. He's a bit of a character and makes me chuckle. 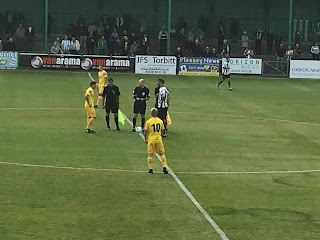 Blyth have lost their two opening games. Chester FC are unbeaten and are co-managed by former Salford managers Anthony Johnson and Bernard Morley. I am a Jonah when it comes to watching Jonno and Bernard's teams - I think it's three wins in 10 outings - current form would suggest they should be okay today.

I was expecting the Spartans PA guy to play some Dire Straits, Sting or heaven forbid, Jimmy Nail, but sadly there's no music today. although the teams are announced over the tannoy. Ms Moon is amused by a saying painted on the stand behind the goal. It says 'Spartans Do Not Ask How Many Are The Enemy, But Where Are They?' 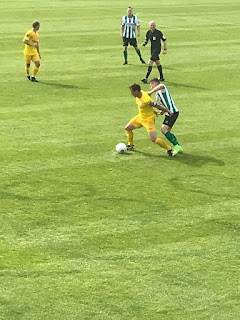 Chester haven't a clue where the enemy lies. They are hit by a north-eastern whirlwind. Comedy defending sees Daniel Maguire ('Nippa' they call him) take advantage. I'm not sure who leaps higher for the second goal on 18 minutes, Kev next to me or Green in the box. Holmes completes the first-half rout on 42 minutes to make it 3-0. A standing ovation by the Spartans supporters sends a tingle down my spine. Kev Marshall is grinning from ear to ear and has risen from his seat to applaud each goal. In contrast Chester are booed off by angry supporters who have made the 400-mile round trip.

A bewildered and shellshocked 'Jonno' and Bernard stomp down the tunnel. What I'd give to be a fly on that dressing room wall. I take a wander around the wonderful Croft Park ground at the break. Ms Moon treats me to a Double Decker from 'Paula's Pantry.' 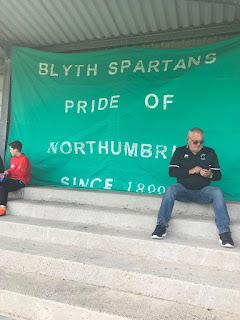 The second half is a horror show for the visitors. Dudley misses an early chance before Reid makes it 4-0 on 55 minutes. Things go from bad to worse with skipper Roberts shown a straight Red for a dangerous tackle in the centre circle.  An own goal by Howson makes it 5-0, before Stopworth scores a consolation goal. Chester then see a shot spectacularly cleared off the line. Before further goals from Wrightson, Buddle and 'Nippa' ensure £9 is pledged to the Help for Heroes charity (+ £10 for visiting two Thankful Villages. 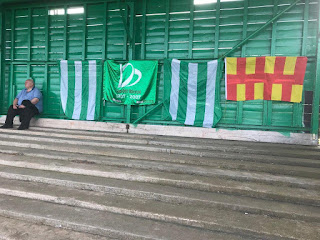 An emotional Anthony Johnson bravely fronts up to the Chester FC TV cameras after the game. He says he is 'embarrassed', 'shaking with rage' and has asked for some of the players to 'rip up their contracts.'

It's been another day of making memories for us two to cherish. The takeaway for me is what a beautiful game of football Blyth Spartans have played today.