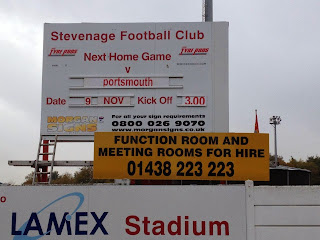 It's Sunday October 25th and I'm stretched out on the sofa, with Murphy the budgie perched on top of my head. Gerard Houllier and Ray Parlour are performing the FA Cup first round draw from the Grand Connaught Rooms in central London. The Mayor of London and I have struck a deal to attend a tie at a ground that neither of us have ticked-off before.

The draw is complete, Murphy has flown back to his cage; he wasn't particularly interested as Norwich City won't be rocking up until the third round. I peruse the draw, excitedly, looking for a romantic tie in the North. A game suddenly catches my eye: Stevenage v Portsmouth. It will be another chalk-off in my quest to join the 92 Club. The romance is that Pompey won the Cup in 2008 but now lie in 16th position in League Two. I punch out the Mayor of London's number on my phone. It's booked in our diaries for Nov 9th. 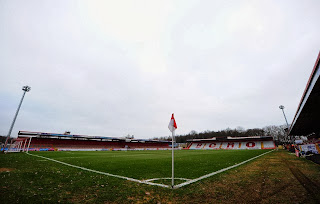 I'm driving across the Vale of Belvoir towards 'Southfork' where the Mayor lives. He's back in town following 20 years of hustle and bustle in the City of London. I pick him up just before midday and head out towards the A1 at Grantham. Fighting Talk is on Five Live. They've had to draft in Sticky P's favourite comedian, Leyton Orient fan Bob Mills, as a late replacement. He's talking about last Sunday's game between Cardiff and Swansea - he calls it 'El Taffico.'

The Mayor is chattering away about a forthcoming question and answer evening at Cotgrave Golf Club that he is organising as a fundraiser for our local cricket club. It's called 'Lifting the Lid.' starring  Derek Randall, Chris Read and Mick Newell.

We breeze down the A1, sweeping past Peterborough. Within 90 minutes the 'Rolls Royce', despite it's serious health problems, is rolling into the huge free car park on Broadhall Way opposite the Lamex Stadium. 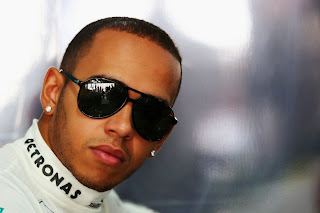 Stevenage is a town and borough in Hertfordshire, 30 miles north of London. It has a population of 80,000. It was designated as a 'New Town' in 1946. Notable folk born in Stevenage include: Lewis Hamilton, Ashley Young and Jack Wilshere. Well known former players include: Steve Morison, Barry Hayles, Lionel Perez and D J Campbell. Record transfer received is £260,000 from Peterborough Utd for the services of winger George Boyd.

We have some craic and banter with a few old boys from Stevenage and Pompey. We dash across the busy carriage way. I clock Pompey's most famous supporter climbing out the back of a van. John Westwood is covered from head to toe in Pompey tattoos. He poses for a photo before continuing to put all his clobber on including his stove pipe hat. 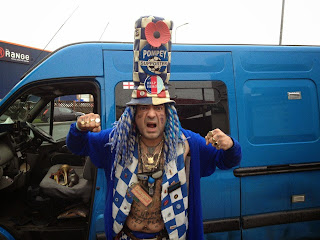 The social club is packed to the rafters with both sets of supporters. We down a couple of 4% Stella's as we watch Reading v QPR. Well known philosopher and professional thug Joey Barton bags a sublime free kick. A blue replica football shirt sits in a frame on the wall. It has the number 21 on it with the name Cole above it. It's in memory of former player Mitchell Cole who died suddenly at the age of just 27 years old. He left a young family and a wife named Charly, the sister of West Ham midfielder Joe Cole.

I'm keen to stand near the huge away following. We pay £22 on the turnstile and a further £3 for the programme. We accidentally find ourselves in the 'Away End.' I like the low roofs on the stands and how close you are to the pitch.

We're both a bit peckish. The Mayor splashes out on a couple of double cheeseburgers piled high with onions. Staff, stewards and catering staff are all obliging. It's a friendly club which still has its Non-League values The turnout from Pompey is staggering. The posh PA announcer plays a couple of foot-tappers from Moloko and S-Express. 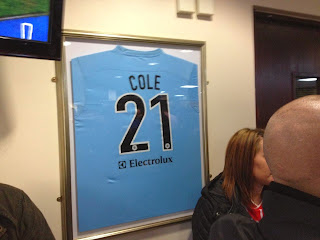 Stevenage manager Graham Westley is having his third spell at the Club following an unsuccessful stewardship at Preston North End, where his unconventional style of management didn't go down too well with the players. Portsmouth are managed by former goalscoring legend Guy Whittingham. A minutes' silence for Remembrance Day is a beautiful and moving moment. The shrill of the referee's whistle and the roar of the crowd make the hairs on the back of my neck stand on end.

Pompey start like the clappers. They soon have John blowing his bugle and ringing his bell as a strike from Jed Wallace bounces off the upright. Stevenage striker Francois Zoko, recently released by Notts County to free up the wage bill, pounces on a loose ball following a cracking save from Trevor Carson; he buries his shot into the corner of the net.

Stevenage are direct from the back but play some neat football in the opposition's half. Portuguese wingers Bruno Andrade and Filipe Morais switch wings and torment the Pompey full backs.
Michael Doughty, the son of the late Nottingham Forest owner Nigel Doughty, is pulling all the strings in midfield. Ivorian forward Zoko makes it 2-0 with a left foot drive on 38 minutes.

I like the little touches that Stevenage as a club make. In the toilets there are pictures of Portsmouth players and management and one with the slogan 'Play Up Pompey.' I take a snap on my phone infront of a couple of baffled visiting supporters. 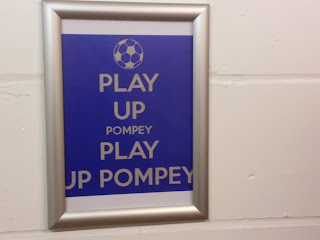 The Pompey faithful are sobering up from their beer-fuelled lunchtime. They don't hurl abuse at their team though, as they still believe. The bloke behind me is uncooth and without banter. He has a foul-mouthed rant at Stevenage 'keeper Chris Day for no apparent reason. John's bugle is out of tune and the drummer is missing a beat.

Another former Magpie makes the headlines for all the wrong reasons. Gavin Mahon is deemed to have left an elbow in after a clattering aerial challenge in midfield. He is dismissed from the field of play.

Robert Carlisle lookalike David Connolly has replaced the ineffective Patrick Agyemang. He acts as a catalyst, springing new life into the visitors as they up the their energy levels and tempo of play. Pompey are given fresh hope with a close range finish from Connolly. They are camped out in the opposition's half as they search desperately for an equaliser.

The Mayor and Groundhopper don't hang around for stoppage time as that bloody car park and road will be a bottle neck. We're on the A1 by the time referee Mr Sutton blows for full time in what has been a splendid cup tie for the neutral.

Man of the Match: Michael Doughty
Posted by Sticky at 7:55 AM