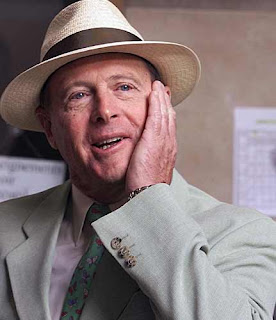 I’m driving out of Highbury, the one in Fleetwood, and not where ‘The Arsenal’ used to play in north London. Rain is pelting down and bouncing off the ‘Rolls Royce’ windscreen as we head out towards the M6.

What a charming and engaging club Fleetwood Town are. The stewards and bar staff are friendly, obliging and courteous. Their mascot, ‘Captain Cod’, is a legend. He was flamed good and proper by the Tricky Tree supporters, but took it in his stride by flapping his fins. 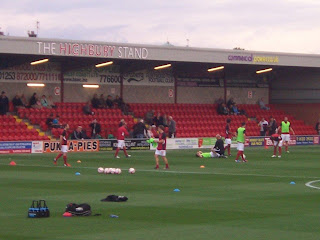 Two days later I tweet him my match report; he retweets it to his Cod Army followers. I thoroughly enjoyed my trip to the North West. Sticky junior and I have spotted that Forest are due at Bloomfield Road, home to the Tangerines of Blackpool, during October half term. We’ll book a day out on the supporters’ coach for that one.

The two highlights of the week have been the performance of Sean Bean, playing a cross-dresser in the brilliant Jimmy McGovern drama ‘The Accused’ and Mrs P writing off a saucepan which she forgot to turn off whilst boiling three eggs for my snap tin.

It’s Friday evening, and I’m driving along Cotgrave Lane. Sticky junior is off for a night’s dossing in Cotgrave, an old mining village. Mrs P has gone to a leaving do at the swanky Sanctuary Restaurant in Saxondale.

I grab a pizza. Murphy sits on my shoulder as we listen to Five Live’s ‘Kicking Off’ show presented by Colin Murray and featuring the amusing Perry Groves and Pat Nevin. I take a wander round to the ‘Nuclear Scientist’s’ crib on Debdale Lane. We neck a couple of bottles of real ale and fight it out on the table tennis table. Honours are even as I turn in for an early night. 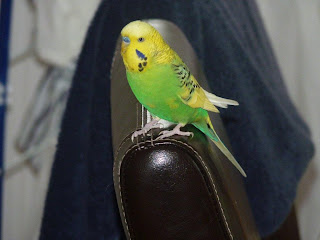 I give the Brian Matthew’s Sound of the 60s show a wide berth on Saturday morning – it was piss poor the previous week. Mrs P tootles off shopping in Clifton. I ask her to pop into Wilkinson’s to fetch me a new pair of reading glasses, as I crushed mine the other evening. I take my under 15 squad for a light training session, mindful of the humid conditions. The season starts on Sept 8th and it will mean I can only groundhop on Saturdays every so often.

I manage a quick chat with Keyworth’s favourite rabbit, Finley Palmer. Poor old ‘Fin’ had a torrid time with his Euro 2012 score predictions. He gives Hemsworth Miners Welfare the kiss of death by predicting a 3-1 home win. The silly old sausage hasn’t taken into account the gruelling extra time they played out at Runcorn Linnets in an FA Cup replay last Tuesday. 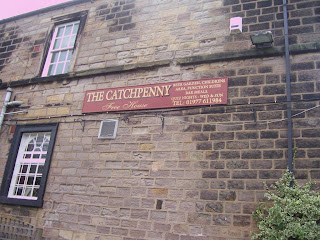 I head up the A614 and onto the A1. Nottingham-born radio presenter and commentator, Darren Fletcher, is reporting on the Championship opener between Leeds United and Wolverhampton Wanderers. ‘Gangsta’ will be kicking-off back in Nottingham as his team fall behind to a headed goal by Argentine striker Luciano Becchio.

The Sat Nav is having a wobble as I hit a new road off the A1. I’m soon driving up Kirkby Road in Hemsworth. I’d planned to pop into the Victoria Hotel for a swift one, but the place looks deserted and the building in disrepair. Further up the street is the Hippodrome Bingo and Social Club – Mrs P would like a bit of ‘eyes down in there. 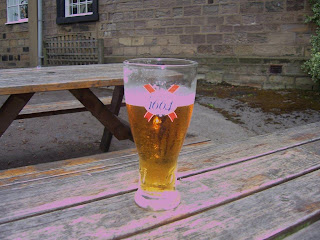 Hemsworth play football in the village of Fitzwilliam. It’s the birthplace of Geoffrey Boycott and footballing brothers Cyril and Peter Knowles. The latter scored over 100 goals for Wolves before voluntarily ending his career to become a Jehovah Witness. Cyril Knowles played over 400 games for Tottenham Hotspur and was once a youth team player for Hemsworth FC. He is well known for the song ‘Nice one Cyril’ which charted at number 14 for the Cockerel Chorus in 1973. He died at the young age of just 47.

I clock where the MDC Sports Stadium is before pulling up at The Catchpenny public house situated on a busy crossroads. It’s a pub where I shared a pint and some hot dogs with Trumpy Bolton on the day of the Royal Wedding.

The landlord is a right miserable so-and-so. A group of blokes crowd around a TV set to watch the Racing Channel from Newmarket and Newbury. Racing Posts are thumbed through and the formbook is studied. A nervous punter rolls up a cigarette. Minutes later a losing betting slip is screwed up and tossed into the air. 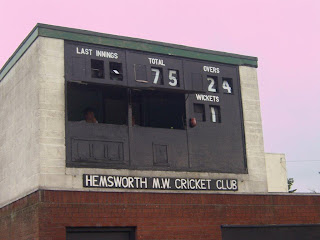 I enjoy a pint of Kronenbourg 1664 in a sun-drenched beer garden, overlooking the busy main road. I squeeze the car through the ‘James Hanby’ gates into a spot in the club car park and head back out the ground to watch a cricket match that’s taking place.

I stroll around the edge of the boundary and chance upon a couple of pensioners sat on a wooden bench behind the bowler’s arm. I ask if Boycott was born here. “Aye, he was born t’other side of that fence lad.” I ask if they ever see him around. “Nay lad, not seen him in ages.” I’ve never forgiven ‘Sir Geoffrey’ for running out my boyhood hero, Derek Randall, in the Silver Jubilee Test at Trent Bridge in 1977.

Its £4 admission and £1 for an excellent programme. They have a quiz page with a superb question: Which English player has scored the most Premiership goals without getting a full cap?

I walk in from behind the clubhouse and I’m immediately taken aback with this tight little ground. On the far side are the dugouts with perspex see-through side panels and white tip-up seats. Adjacent to this is a small stand with green tip up seats. There are neatly trimmed conifers, metal fencing and concrete panels. The nearest side is where the clubhouse is situated. It has been funded by the Football Foundation. There is a small, raised concrete terrace outside the bar, where most of the locals congregate. 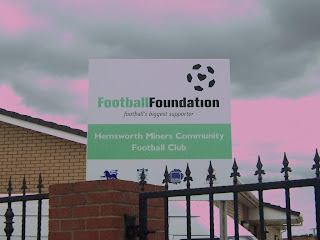 The bar food is generous in helpings and competitive in pricing. Sausage and chip cobs are the big seller. They even have Yorkshire pudding on the menu. An elderly PA announcer shouts out the teams above the din of Thin Lizzy’s ‘The Boys are Back in Town.’

Hemsworth are brimming with confidence and are two the good within 12 minutes. A ball is sprayed out to Will Kemp on the right wing; his cross is turned into the net by Neil Towler. The second is courtesy of an error by the ‘keeper who’s washing windows – as Boycott would say “my granny could have caught that in her pinny” – Towler gleefully taps the loose ball home.

The game’s best player, Kemp, limps off on 25 minutes. His replacement, Robbie Crapper, is every bit as good. The game turns on its head on the half hour. A needless penalty is given away and is coolly converted by Sidebottom – that’s Dean, not Ryan. On 42 minutes its 2-2 with a close range finish by Ben Clark. Rossington even have the audacity to hit the post with a 25 yard left footed howitzer by their 9 jacket. 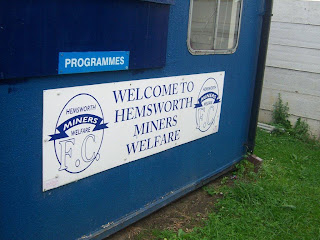 A majority of the 97 crowd pour into the bar for liquid refreshment. Sticky opts to bask in the West Yorkshire sunshine. I admire the range of T-shirts on view. Folk are pretty cool in this neck of the woods. There’s Jimi Hendrix, The Stone Roses and When Saturday Comes. Some cheeky sod is sporting the same little blue number that I bought from Next, which I’m wearing today.

It’s déjà vu on the opening day of the season, as I scroll down the live scores: NFFC are 0-0, the Pies are winning and Lincoln City are losing. 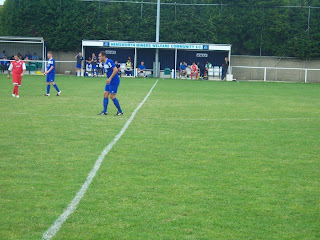 The game takes a well deserved breather. Rossington remarkably take the lead. McLaughlin chases a lost cause, the keeper commits a howler and the ball is walked into the back of an empty net. Hemsworth are soon back on level terms with Swift drilling home a shot from the edge of the area.

It’s a classic game of non league football; I don’t want it to end. The visitors regain the lead with 15 minutes remaining with a peach of a free kick from their captain Dave Holvey. Hemsworth literally throw the kitchen sink at them but Rossington hang on for a famous victory.

Are you sure that the snappy blue number was from Next Sticky ?