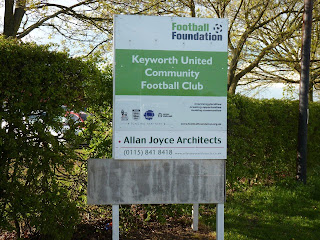 We spend a couple of days in York over Easter at my brother’s house. We pound the pavements of the enchanting city centre during a miserable, rainy Bank Holiday Monday. I miss out on my usual pint at the delightful Maltings pub, situated across the road from the railway station.

Despite a Twitter appeal and a plea for a budgie-sitter to family and friends, poor old Murphy Palmer spends two nights home alone. I pine for the little fellow. He’s bouncing around his cage when we arrive back on Tuesday lunchtime.

Nothing catches my eye on the midweek non-league schedule. I opt to scout a few rearranged Young Elizabethan League games. 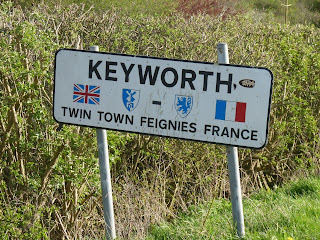 It’s Thursday evening. ‘The Skipper’s’ team, Clifton All-Whites are playing in town. The game is being played at a comprehensive school at the back of an old pit estate. I stand with a mate at the top of a grass bank.

‘The Skipper’ fires a shot into the roof of the net from 35 yards out. Suddenly a stray boot thuds into the ground from behind me. I glance around to see a group of youths loitering on a balcony of a first floor flat, laughing and gesticulating. Suddenly we are showered with cans, and bottles full of water.

There’s a scream from some parents from the other side of the pitch, as a four foot piece of timber whistles over my head landing at the foot of the bank. I race round to the front of the shops but the cheeky scampsters have scarpered up the hill. It’s a good old half an hour before Plod roll up. 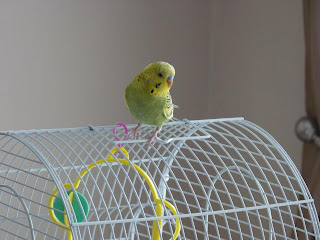 The weekend is a football bonanza. ‘The Skipper’s’ team grab a vital point against Dunkirk. I drive over to St Anns immediately after the game to catch the silky skills and quick feet of Sticky Jnr. They run out 4-2 winners. I’m disappointed in the lack of discipline on both sides.

It’s déjà vu on Sunday with ‘The Skipper’s’ team getting well beaten in the Nottinghamshire County Shield final. The winning side play a beautiful game but they lack class and etiquette in other areas. They are disrespectful and bad-mouth the man in black. One calls the ref a “cheat.” They have three lads booked; Lord only knows how they would behave if they were to lose.

I slump in the bath on Monday evening, and tune into Five Live’s analytical Monday Night Club. Roberto Martinez’s Wigan Athletic weave their magic at the Emirates Stadium, as they inch their way to Premiership safety. 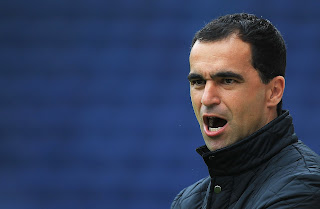 I ring legendary KUCFC reserve team manager Alan ‘Jacko’ Jackson first thing on Tuesday morning to check on pitch conditions at the ‘Theatre of Dreams.’ It appears that he is to be elevated to 1st team assistant manager this evening as ‘Webbie’ is working away.

I wile away the afternoon in the Warehouse, estranged from work buddy Shifty Edwards. I listen to Ratcliffe and Maconie on 6 Music. They play ‘Don’t Talk To Me About Love’ by Scottish post-punk band Altered Images. I used to have a huge crush on their lead singer Clare Grogan when I was a kid.

Sticky jnr wanders into the kitchen at tea-time waving a match ticket at me for the Hull City v NFFC clash at the KC Stadium on Saturday. Schoolboy pranks, latest girlfriends and football business are discussed during chicken and mushroom pie with mash and veg. 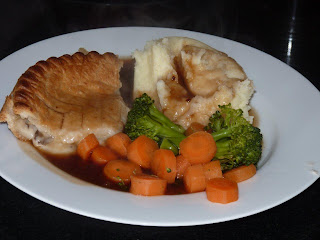 Mrs P slopes off to the gym. Murphy asks if he can give a score prediction for tonight’s game. “Not on your Nelly son, you’re not muscling in on Finley Palmer’s (rabbit) territory.” Old ‘Finners’ goes for an upset: “2-1 to Keyworth.” Don’t worry Linby fans, his forecasts are crap.

Platt Lane can be a cold, desolate, bleak place to watch football. I dress for the occasion, slipping on some thermals. I sling my camera bag over my shoulder and head off towards the ground. Mrs P drives by shaking her head in disbelief at sad old Groundhopper.

I stroll onto Normanton Lane and pick up the pace. I take a right hand turn onto Nicker Hill. Back in October 1983, 16 year old trainee hairdresser Colette Aram was abducted from this road and later raped and strangled. It was the first case to appear on BBC1’s Crimewatch programme. On 25th January Paul Hutchinson was sentenced to life imprisonment for her murder. 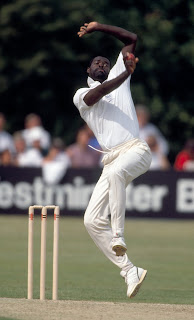 I turn left down Platt Lane. The sky for the first time today is sea blue. I’m sweating up like Grand National winner Neptune’s Collonges by the time I walk through the main entrance to the ground.

A local historian and good friend of mine, Barry Baker is currently compiling a history of KUCFC. It is suggested that a club may have been in the village as far back as 1876. The first League goal ever scored at Everton’s Goodison Park was by Nottingham Forest’s Horace Pike, who was born in Keyworth. 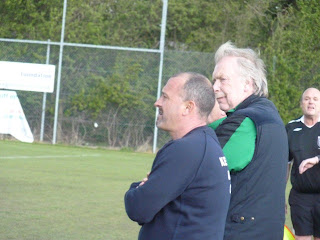 Players to have played for Keyworth United and then moved on to professional clubs include: Brian Stubbs, David Riley, Chris Freestone and Mick Waite. Former Aston Villa, Notts County and Hull City defender Dave Norton is on the bench this evening.

Linby is a village next to the town of Hucknall. It has one of the most picturesque grounds in the county, with St Michael’s Church forming a backdrop. I ‘worked’ at Linby Colliery from 1982 to 1985. It was one of the happiest times of my life.

I’m led to believe that Linby have been accepted into the Central Midlands League for the 2012-13. Keyworth continue with the club ethos of playing boys who have risen from the youth ranks. Their oldest two players in the starting line-up this evening are just 24 years of age. I applaud this policy. Right midfielder Sam Wood is just 16 years old; he’s a big pal of Sticky junior’s. 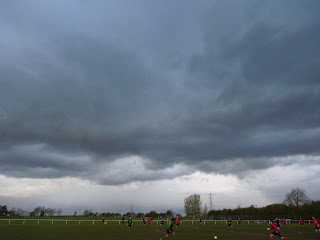 Behind the far goal is a disused railway line. To the left are three 11 a-side pitches and small sided areas. On the opposite side are two brick dugouts, with the modern clubhouse situated behind the nearest goal.

Jacko is busy handing in team sheets as I take my spot to the left of the Keyworth dugout towards the top of the slope. I’ve been joined by The Taxman, ‘Snatch Randall’ and ‘Woody.’ One job Jacko has forgot to do is pump up the match ball, the ref insists on a swap. 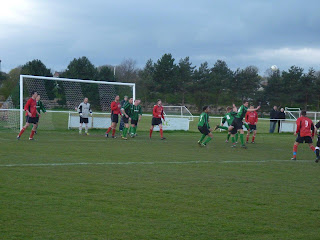 Twenty one year old Damian Mann looks a slip of a lad down the Linby left wing. He dances, jigs and shuffles his frail body along the touchline. His movement is light and his feet are electric. Linby take the lead from a Barry Payne shot on 20 minutes after Keyworth fail to clear a cross. A lady Linby supporter close by produces a rattle to celebrate the goal.

Keyworth restore parity immediately, a ball played down the left is pounced upon by Ben Hanrahan who smashes a shot past the keeper’s inside post.

I have a quick chat with Linby secretary Ade Ward. He is accompanied by his wife who is overwhelmed to meet me having been awarded 2009/2010 Brew of the Season. I’m keen for info on Mann, who has been pleasing on the eye.

On 35 minutes the Greens take the lead against the run of play, with a cracking header from Ian Marley following good work by Elliott Roulestone down the left.

A speculative shot from Marley from miles out is waved onto the bar by the Linby ‘keeper. ‘The Taxman’ and 'Woody' are bleating about the biting wind and showery conditions, so we head to the best clubhouse on the circuit for a hot drink. 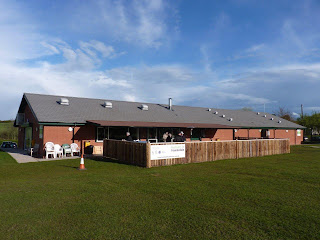 Damian Mann, who has ran Keyworth ragged on the left, is mysteriously shunted out on the right wing. Linby begin to look disjointed. They look to blame others. The referee and linesman are called an “embarrassment”

Mann is withdrawn on 70 minutes. He peels off his shirt and heads off back to the changing room. His replacement earns the visitors a deserved draw in the closing moments, striking a shot from the edge of the area which creeps into the left hand corner of the net.

Brain against brawn has resulted in a very entertaining draw. Keyworth’s young guns have battled from start to finish. The craft and guile of Linby can only be rewarded with a point.

Man of the Match: Damian Mann
Posted by Sticky at 1:18 PM

Great report sticky... I looked after hadlees son at his testimonial in 1986, Franklyn Stephenson also played that day. My five yr old has instructed me to offer our services as a potential budgie sitter, I will DM you on twitter.

Not like you to miss out somewhat absrtact hall of famers like former Monkee Micky Dolenz who had a short spell living in Keyworth. No I don't know why he rocked up here either.

One thing that I like when I travel is to try the best dish in the town, because every town have their special dishes.