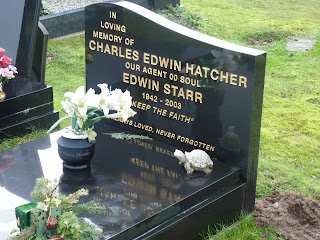 It’s Thursday December 22nd. I’m driving the ‘Rolls Royce’ out of Ruddington Business Park. I swing left at the roundabout onto the A60. Legendary warehouseman ‘Shifty Edwards’ is my wing man. The radio is turned off, we both remain silent. We’re apprehensive, nervous, anxious and excited.

I drive past the old Nottingham Knight hotel and take a right hand turn into Wilford Hill Crematorium. We’re here to pay our respects. Shifty spins all the discs in our warehouse, he has got me listening to Tamla Motown and Northern Soul music. We both share a fondness for the American soul singer Edwin Starr, who died in the bath at his Bramcote home, near Nottingham, eight years ago at the age of 61.

We know he was laid to rest in the Southern Cemetery. We walk off in opposite directions. Suddenly Shifty catches my eye-line. He’s jumping up and down and waving his arms about frantically. He’s found him. I scamper over towards him.

The headstone is black, and the grave well tended to. Etched onto the stone in gold lettering is his real name ‘Charles Edwin Hatcher.’ It’s a poignant moment for both of us. A Northern Soul and Motown legend, buried less than a mile from where we work together. 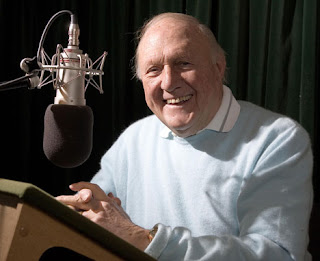 The Top 50 Most Shocking Celebrity Moments on Channel 5 fails to amuse me on Friday evening. I turn in for bed at 10pm. I have a restless night. My stomach is churning from all the Stilton and Rioja that I’ve devoured.

The morning papers are full of the New Year’s Honours List. I notice that 82 year old Ashton-under-Lyne born BBC sports reporter Stuart Hall has been awarded an OBE. Not before time, Ma’am.

I have a browse of the Web whilst listening to The Charlatans lead singer Tim Burgess presenting the 6 Music Breakfast Show. He plays ‘Autobahn’ by German electronic synth-pop band Kraftwerk. I once saw them at Rock City in 1980. It was the most boring gig on earth. The highlight of the night was when my mate ‘Topper’ got booted out for being drunk and disorderly. 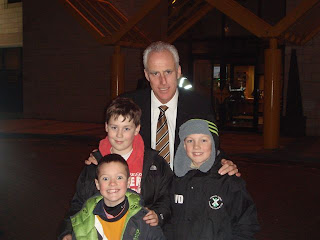 Mick McCarthy’s leading groupie, ‘Gangsta’, is 8 years old today. He had the pleasure of meeting the dour Yorkshireman last week at Molineux. ‘Gangsta’, just like his Uncle Sticky, can’t arf pick em, as Wolves and Norwich played out a cracking 2-2 draw.

I mention to ‘Gangsta’ and my Godson Will that I’ve spotted a rat in the kitchen, and that it might be wise to invest in a trap from our local hardware store. Turns out that Santa has dropped a hamster down the chimney for the youngsters.

I’m all set for my trip to Peterborough. I should know the route like the back of my hand, but nevertheless rig up the Sat Nav. 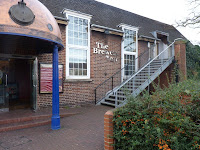 There have already been a couple of goals to report on at the King Power Stadium, Walkers Stadium – or in old money Filbert Street. David Nugent has bagged against his old club. I rate him highly and saw him terrorise the Tricky Trees earlier in the season.

I drive down the A606 towards Melton Mowbray. To my right in the distance is the recently refurbished Pullman Inn at Widmerpool. I pass signs for Long Clawson, which is one of only three places where Stilton cheese is produced.

I saw an interesting stat from BBC football commentator Conor McNamara on Twitter earlier today. Apparently Blackburn have taken points off Manchester Utd in five out of the last seven seasons. They’ve started well at Old Trafford, with their Nigerian striker Yakubu putting them one to the good from the spot. Insightful summariser Jimmy Armfield pours scorn on any comparisons between Phil Jones and the late, great Duncan Edwards. 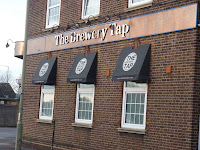 The A1 south-bound has served me well on recent trips. I’m parked up in Peterborough town centre in just over an hour. I’m meeting an old school friend called Ackers in the Brewery Tap on Westgate. I walk past a bustling market place, with the cathedral on the opposite side of the street towering above the shops.

Ackers shouts me up a pint of Inferno from Oakham Ales, who are based in Peterborough. The pub is huge and two-tiered. A local makes good use of the jukebox –The Smiths, James and Arctic Monkeys are particular favourites of mine.

Peterborough Northern Star’s ground is situated on a huge council estate on Chestnut Avenue in the town’s Dogsthorpe area, which featured on the Channel 4 programme The Secret Millionaire. The road is crammed full of parked cars. A heavy away following is expected. I squeeze the ‘Rolls Royce’ into a tight spot on the main drag. 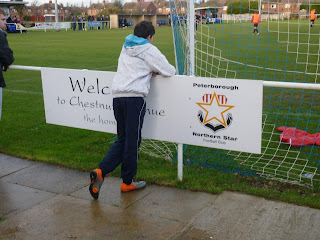 Peterborough Northern Star was originally formed as a village side from two brickyards, Northam in Eye and the Star brickworks in Peterborough. It would appear that there is a natural progression from their junior ranks and the untapped talent on the sprawling estate.

Kings Lynn is a sea port and market town, which lies on the River Great Ouse, in the county of Norfolk, with a population of just over 40,000. I remember visiting it as part of a Geography project in 1979. We saw scores of Skoda cars arriving in the docks from Hamburg. We also visited Lockwood’s, the tinned fruit manufacturer.

In 1987 Kings Lynn became the first town to install CCTV in its centre. Notable people from the area include Queen drummer Roger Taylor, Formula One racing driver Martin Brundle, England fast bowler Martin Saggers and former bin man Michael Carroll, who scooped over £9 million on the National Lottery and blew the lot. Kings Lynn were formed in 1879. On 25th November 2009 they were wound up in the High Court over unpaid debts of over £77,000. Last season they were knocked out of the semi-final of the FA Vase by Coalville Town. The Linnets currently top the table, having only suffered two league defeats. Peterborough NS are sitting in 4th position.

It’s £5 on the gate and £1 for a glossy 38 page programme, heavily laden with adverts. I’m immediately impressed with the ground. Tiny covered stands are dotted on both sides of the ground. The pitch has stood up to the blustery conditions that the country has suffered over the last few days. 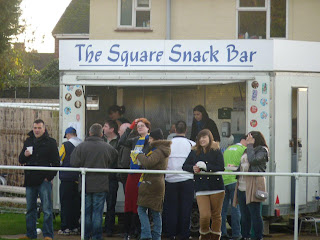 Business is thriving at ‘Angie’s Kitchen’ and ‘The Square Snack Bar.’ The teams are announced on the PA. One or two names are familiar to me. Former Nottingham Forest scholars Liam Hook and Robert Hughes lock horns on opposite sides.

There’s a fast, frantic opening, with chances at either end as Northern Star match the league leaders. The Linnet’s ‘keeper makes himself big and beats away a Northern Star shot, the rebound is fired wide. Kings Lynn immediately pour forward, Spriggs leaves his marker for dead, clips in a cross to the back stick, where Luke Thurlbourne nods the ball high into the net.

The remainder of the first half is tepid at best, as both teams fail to craft a worthy chance. Kings Lynn have been a major disappointment, they are narrow and without quality.

I’ve forgot my glasses so can’t check the half times on my phone. Ackers is not wearing his reading glasses. We both struggle to scan the BBC vidiprinter. No need to worry about goals at The City Ground – apparently they’ve cancelled the Goal of the Month award at the Tricky Trees for December. 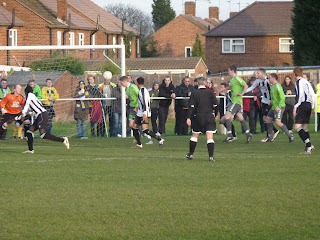 Ackers has pea and ham soup, which appears to be a local delicacy in these parts. I notice that tea is poured from the pot, and very nice it is too. It’s marked with a score of 8 out of 10.

Lynn’s manager Gary Setchell has certainly kicked an ass or two after a lacklustre performance. They play with more urgency in the second period. The front two decide to stretch their legs, the link-up play is impressive. The Linnets go two to the good, with Spriggs hitting the onion bag from close range.

They decide to run the clock down and withdraw their two forwards, not through fatigue though. I’m immediately impressed with youngster Robbie Harris, who has energy, movement and desire.

Northern Star throw caution to the wind. A deflected shot loops up into the air, ‘Gibbo’ thumps the clearance into the net. The Linnets are on the back foot but still manage to hit the woodwork through Harris. Minutes from time Northern Star’s substitute is bundled over in the box. Stead converts from the spot, despite the Linnets’ ‘keeper getting a strong hand on it.

Man of the Match: Richard Jones
Posted by Sticky at 9:54 AM

I don't know if I am an uncomfortable person but I hate those silent moments when you don't know what to say.