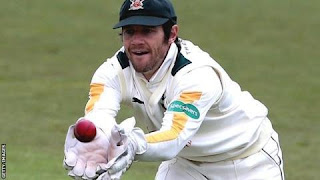 We traipse out of Notts County's wonderful Meadow Lane ground. The oldest Football League club in the world has tonked 'The Lincoln' 4-1. The sending off has killed us. I'm sick to the pit of my stomach. Only your team can make you feel this emotional. I bump into Pies' stalwart 'Chalky Junior' close to Iremonger Road. We briefly chew the fat off the bones of the game. He invites us over to The Embankment on London Road for an ale or two with his Dad, who's a good mate, but also a big Notts fan. I politely decline and wish him well.

Plod are escorting a seething Lincoln back to the train station. I plan to switch off social media for the rest of the evening and drink myself into a stupor. There'll be no Football League Show or Match of the Day for Sticky. I'm finished with football. I hate the game. 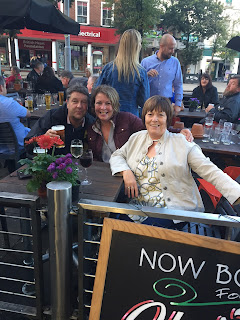 I'm still stewing on the patio at the Herbert Kilpin on Bridlesmith Walk. Leicester and Liverpool are on TV; I'd rather peg the washing out than watch football again. I might start watching Rugby Union and Formula One, or heavens forbid, start playing golf. I might call football, soccer.  Ms Moon silently sips her prosecco - I would at that bloody price too. In my hour of need, my mobile goes off. I fish it out of my pocket and look at the name flashing on the console, it brings a rare smile to my face.

Trumpy Bolton can't bear to watch his beloved Leicester City on the gogglebox. Mr and Mrs Bolton have been on the sauce in town since mid-morning. We hook up at the timber-framed Georgian pub, The Bell, in Nottingham's Market Square. I shed a few tears to Trumpy about 'The Lincoln.' Through his drunken haze, it falls on deaf ears - the legend couldn't give two hoots. It's a good end to a cracking day out. 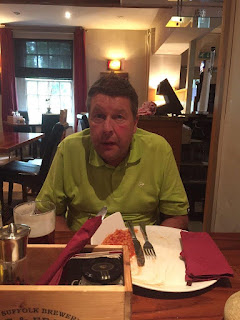 In a moment of spontaneity, I ring up the Sincil Bank ticket office on Monday lunchtime. They only have 'restricted view' seats left available for the visit of Barnet in the Software Europe Stand. I have my usual chippy tea on Lincoln High Street, before taking my pew right behind Danny Cowley's dugout. Jesus Christ they weren't kidding about the view. 'The Lincoln' go 1-0 up 'early doors', not that Sticky knows much about it. I'm presuming we're 1-0 up as everyone is jumping up and down, dancing, singing and hugging one another, but I can't see a chuffing thing.

A friendly guy shouts me up the steps and ushers me into a spare seat with a bird's eye view of the pitch. 'The Lincoln' are rampant. Only great 'keeping and good fortune see the Bees of Barnet go into the dressing room at only 2-0 down. Barnet are different class in the second half, as they pass and burn the Imps off the pitch. It's a relief to us all when the ref blows for full-time after 8 minutes 'mystery time' as John Motson used to call it. We're fagged out after playing over an hour with ten men at the weekend. 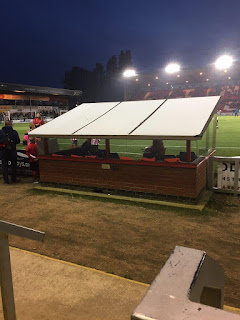 Ms Moon arrives home on Wednesday tea-time to find me flat out on the floor, barely conscious and gasping for air. After a glass of water and a stiff brandy, she asks me what the heck is going off. "That's exactly what I want to know, how the hell has ex-bowler Harry Gurney scored 42 not out when he is a pub landlord and the worst batsman in the world?" Notts limp over the promotion-winning line thanks to the efforts of 'skipper Chris Read in his final game for the club. He will be remembered by those at Trent Bridge as the best gloveman in the business, who was treated like dirt by Duncan Fletcher and England.

It's another filthy evening as 'The Taxman', 'The Italian Stallion' and Sticky head up the A610 towards the old mining town of Eastwood, where the author D H Lawrence was born. It's tipping it down with rain as we part with £4 each at the turnstile. Keyworth United (my second favourite team) are 2-0 down inside four minutes. Green Army forward, 17-year-old Matty Antcliffe, plays a beautiful game, scoring a couple of opportunist goals to reduce arrears. One or two scouts need to get off their arse and take a look at this kid. 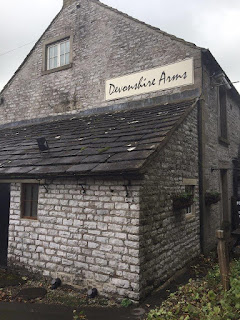 Thank the Lord it's Friday evening; the pressure has been on at work. We jump on the number 25 bus and get off up at Mapperley Tops. We enjoy a few drinky poos at the Woodthorpe Top and Old Flowershop before retiring early as Sticky Palms has a long day ahead tomorrow driving Royalty around the roads of Derbyshire and Cheshire.

The plan was to travel up to Gorton, in east Manchester, to take in Abbey Hey v Winsford United. It's a tough, gritty area where actor John Thaw and ex-Manchester United midfielder Nicky Butt were born. Trumpy needs to tick off a pub in Peak Forest and has requested an early start. He's still in the shower when I ring to say the chauffeur will be arriving at 9.45am. 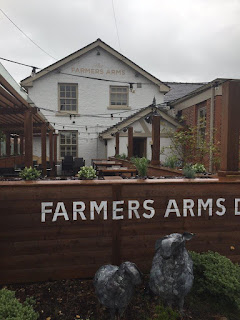 There's no sponsored carrier bag for his booty (litre of cider). I might need to rummage through my glove compartment for some shades to cope with the glare of his olive green Dunlop polo shirt. It's Bolton's turn to shed some tears this week as Sticky drives past a couple of boozers that have opened 'early doors' in Baslow. There are further tantrums in Tideswell as all three hostelries aren't due to open their doors until midday. We roll into the car park of the Devonshire Arms in Peak Forest at bang on twelve bells - the litre of cider has a few dregs left in it. He's already had a bottle of Marston's Old Empire for 'breakfast.'

Bolton orders up the drinks accompanied by sausage, egg and chips from a frosty landlady who is eyeing up three baseball-capped youths slouched in the corner, who are looking rather shifty. The skies start to darken. I suggest we take in Poynton v Rylands in the Cheshire Premier League as I have grave concerns about the traffic in Manchester. 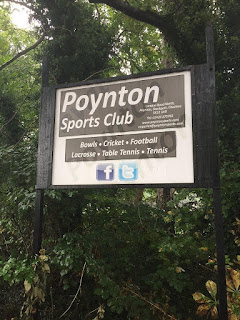 Poynton is crawling with coppers. Tragic news has emerged of a woman detective constable's body (mother of three young children) being recovered from a lake in the early hours of Friday morning. A man is helping police with their enquiries.

Poynton is a town in Cheshire 7 miles south-east of Manchester with a population of 14,260.The town sits on the Macclesfield Canal which forms part of the Cheshire Ring. In 2011 the village road network was reconstructed and re-named 'Shared Space.' It basically gives the pedestrian the right of way - in Nottingham, we call it jaywalking. Trumpy will take full advantage of this once he's drank a shed full at lunchtime. 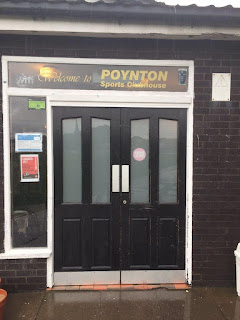 We stick the car in the back of Waitrose. It's raining cats 'n dogs as we pick up pace down Park Lane. Man alive this place is posh. It reminds me of West Bridgford without all the charity shops and to let signs. It has something else that WB is crying out for - some decent pubs. We dive into the Cask Tavern a good pub guide entry. The friendly and knowledgeable barman is passionate about the Bollington ales on display. We shout up a Gyle 1000, a New England IPA at 5% - that's me over and out for the day. The legend Bolton is soon sniffing out a beer tapas (three glasses). It's still tipping it down with rain as Razorlight's 'In the Morning' on the pub i-Pod shuffle is piped out of the speakers.

Trumpy has a thirst on. He makes full use of the 'shared space' opportunity. He clocks the Farmers Arms a few hundred yards down the street. Another ale is shouted up and hurled down the hatch in minutes. The Poynton Sports Club is a short drive away. The players are warming up. My eyes are diverted and transfixed on the young referee who is staring down at the pitch. I catch his attention, "mate you're not going to call this off are you? For Christ's sake they're playing hockey over there." 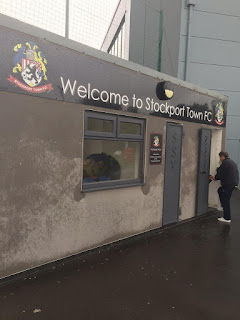 Trumpy is as snug as a bug in the rug in the social club. There's Wainwright and Robinson's bitter on hand pull and BT Sport live scores coming through. Who's going to break the bad news to him that the game has been scrubbed at 2.55pm by a young ref who will be on his evening paper round by now?

Stockport Town is the backup game being played at the Stockport Sports Village on the ghastly 3G surface. Trumpy negotiates £4 entry with the turnstile operator as the game is 20 minutes in. League leaders Silsden AFC are the visitors. Trumpy has got wind that Danny Rose has scored twice for the Stags v the Pies in the lunchtime kick-off. He says that he'd heard the Spurs full-back was unhappy in London but didn't think he'd drop down to League Two and move to Mansfield. 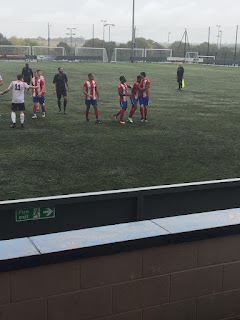 We sit in the away end (attendance is only 45). The suspended Silsden reserve 'keeper is sat in front of us. He has a voice like a foghorn and is the Silsden Spitting Champion with an array of wind and rain-assisted gobs. He swears like a trooper. His mates on the pitch get fed up of his shouting and yawping; one tells him to eff off. It's 1-1 at the break and we still haven't seen a bloody goal.

A sulking Bolton returns from the bar, moaning and groaning about paying £2.85 for a can of Strongbow - the one drink I know he detests and only sups as a last resort. It's quite a bad-tempered game. The 'Silsden Headhunters' have already excused their performance by saying four of their 'big players' are unavailable today. Two late goals for the visitors maintain their 100% start to the season.

Man of the Match: Sir Chris Read
Posted by Sticky at 6:39 PM