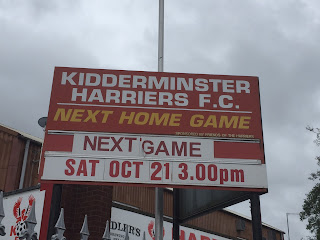 Dejected and disappointed Wrexham fans are filing out of AFC Fylde's Mill Farm ground, as the Dragons tumble out of the FA Cup at the first hurdle. We head towards East Lancashire, as I've booked a night's accommodation at the Waddington Arms Hotel, just north of Clitheroe. We are greeted with a friendly, warm welcome, a blazing wood burner and an array of real ales. We tick off two more pubs in the village, before settling in for the evening.

On Sunday I catch the dying embers of D***y County v Nottingham Forest in the Gedling Pub and Kitchen, after a stroll around the estate of Brownsholme Hall in the Ribble Valley. Glum-looking locals drown their sorrows after another disappointing display - Forest continue to take one step forward and two steps back, despite one of the best youth policies in the country.

It's Monday evening and I'm staying the night at a wind-swept Crowne Plaza hotel in Solihull. I've two meetings tomorrow - one's  in West Bromwich with a Wolves season ticket holder - he'll be as happy as Larry as they've turned 'The Villa' over. I've clocked that 'The Lincoln' are on their travels on Tuesday evening at Swindon Town's County Ground. Blimey, I'm tempted, as it's only 80 miles away (from West Brom) and it will be the 82nd League ground I've visited. 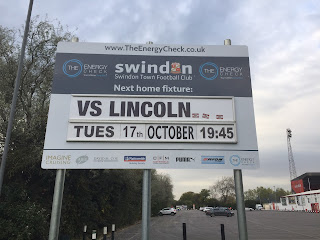 I have a spot of tea in a Miller and Carter Steakhouse, a ten-minute walk from the ground. Ms Moon takes the rise out of me, via text, because I've had fish 'n chips and not steak. The Swindon DJ is worse than the one at AFC Fylde. The average age of their support is over 50, and I'm being generous at that. Despite the Darby and Joan Club outing, the guy spins Grime and R'n'B for a full half an hour before the game. 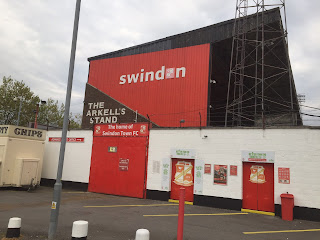 The 'music' doesn't put 'The Lincoln' off as they start like a train, like they did at Notts County, and at home versus Barnet. We hit the underside of the bar and work the keeper'. Nathan Arnold sees an effort cannon off the post, before our talisman, Sean Raggett, the best centre-half we've had since Trevor Peake and Steve Thompson, nods home the winner ten minutes from time. The Cowleys are ecstatic, as are the 400 away following - not bad for a school night. Diana Dors, Tommy Cooper, Johnny Francome and Melissa Messenger haven taken one helluva of a 1-0 beating.

I do a little celebratory jig and Moonwalk on the forecourt of a nearby petrol station, and a Homer Simpson woohoo, as a convoy of Red Imps fans fill up their tanks with petrol for the long journey home. What a night out in Swindon we've had. How many folk can say that? 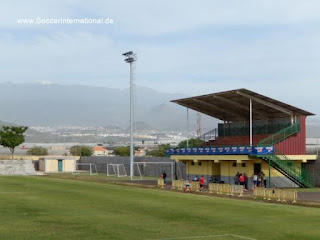 It's Friday evening and I've polished off a bottle of Chilean Merlot whilst watching the underrated Glenn Murray kill off the Iron of West Ham United. I receive a text from a confused Trumpy Bolton who's in South Wales for the weekend, watching his beloved Leicester City. He must be as drunk as a skunk as I can't make head nor tail of his text, unless it's written in Welsh.

I spend Saturday morning scouring and researching the Net for a game in Tenerife on Nov 4th. UD Tenerife Sur Barra FC are kicking off at 4pm at Estadio Villa Isabel - I've Thomas Cooked it. 'Bruiser', 'the Big Man' and the rest of the boys will be on the sauce at Leonardo's Bar in Playa De Las Americas watching the results coming in - I'll catch up with them Shandy drinkers when I'm back at HQ. 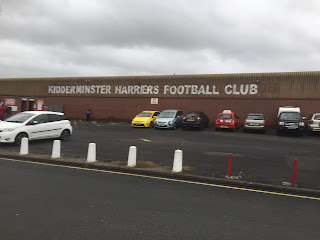 After lazing around we jump into the car just before 12:30pm. 'Storm Brian' is forecast to kick-in any time now. The M42, M6 and M5 best be behaving itself. There are a few dark clouds lurking about and the wind's whipping up. We listen to Five Live from Stamford Bridge (yawn) before turning over to Paul Gambaccini's Pick of the Pops on Radio 2. 1984 is the year. Ms Moon sings her heart out to 'All Cried Out' by Alison Moyet - Auto Windscreens are on standby.

Kidderminster is a town in the Wyre Forest district of Worcestershire, with a 55,000 population. The River Stour and Staffordshire and Worcestershire Canal run through the town. Kidderminster is famous for its modern carpets. Well known people born in the town include: Sir Rowland Hill, the inventor of the Penny Black stamp and Alun Evans who became England's first £100,000 teenager when he signed for Liverpool from Wolves. Ex Denmark international and Liverpool midfielder Jan Molby once managed 'Kiddy.' 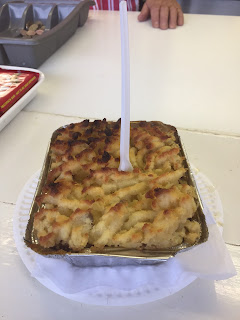 I was listening to the Jeremy Vine Show a few years ago (please accept my apologies for this) when a survey on football food was published. Kidderminster was the most expensive. I heard Vine bleating on about this, so I tweeted in defending the £4.50 for a portion of cottage pie. To be fair to the bloke he read it out. Nigel Clough's Burton Albion always had a pie each on the coach journey home from the Aggborough Stadium.

We arrive at the Aggborough an hour before kick off. There's no swanky pub or gorgeous blonde ale for Sticky Palms today. We're both 'Hank Marvin.' I've raved to Ms Moon all week about the notorious Kiddy cottage pie. A cheerful, rotund chap serves up two portions. The good lady and I don't speak for ten minutes. It's up there with a Michelin Star restaurant or Egon Ronay recommendation. 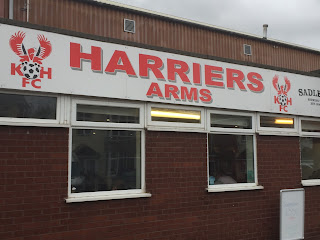 The Kiddy DJ is on flames compared to 'Dave Lee Travis' at AFC Fylde last week. He spins Rag'n' Bone Man, Status Quo and 'Insomnia' by Faithless - we could both do with forty winks after devouring that pie.

Crikey Moses, we've a football match to watch here. I saw Kiddy and Spennymoor a few times last season, and rate them both highly. 'Storm Brian' doesn't really materialise. Yes, it's windy and rainy, but don't believe the hype folks.

The Kiddy 'keeper is struggling to judge the swirling wind, his colleagues don't help him by constantly passing the ball backwards at differing angles. A shanked clearance falls at the feet of David Foley who from fully 45 yards out sees a shot sail over the stranded shot stopper and into the roof of the net. How it's only 0-1 at the break, Lord only knows as both sides waste chances. 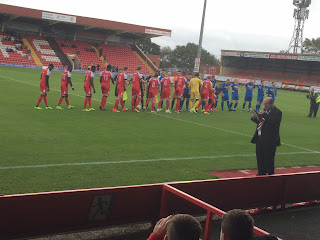 Oh my God, what a wonderful second half of football we have the privilege to witness, in testing conditions too, as the rain begins to sile down.  Kiddy snap at the heels of the visitors. Emmanuel Sonupe and Elton Ngwatala dictate play. The equaliser is a beautifully crafted goal that's fired home by James McQuilkin - a player that folk around us have moaned and groaned about for most of the afternoon.

Spennymoor looked to have lost the plot and are under the cosh. Kiddy's sub, Andre Brown's first touch is a headed goal from a corner. The Moors aren't finished though. Sub Rob Ranshaw is upended in the box by James O'Connor, who receives a second yellow card. The resulting penalty is coolly put away by Tait to grab a point for the visitors, ensuring the 'Spennymoor 28' enjoy the 400-mile round trip home.

Ms Moon says she doesn't want the game to end. I remind her she'll miss 'Strictly' and X-Factor' just as the referee blows the final whistle.

Man of the Match: James O'Connor
Posted by Sticky at 6:38 PM