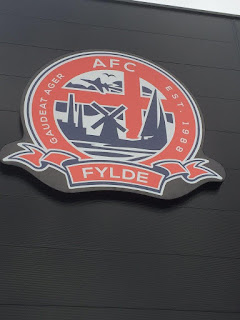 It's 93 minutes on the clock at Stocksbridge Steels' drop-dead gorgeous Bracken Moor Stadium. I suggest to Ms Moon that we shoot off a couple of minutes early, as the car park could be awkward to manoeuvre out of. The game's over as a contest - Atherton Collieries are coasting to a 3-0 victory. I'm a bit miffed, when I notice later in the evening, that further goals were scored in the 94th and 95th minute. Ms Moon is particularly cross, as she missed the third goal due to a 'comfort break.' Never leave a game early folks, or 'powder your nose.'

It's Sunday lunchtime and I'm strolling through the back streets of Netherfield, three miles east of Nottingham city centre. We got held up here a few weeks back. The place was crawling with 'the Boys in Blue.' A street was sealed off with a police helicopter hovering above. Three people were attacked at a property on Curzon Street, one was left with life-altering injuries. I walk past the Railway Hotel, formally known to locals as Jackie Bells (legendary landlord of said hostelry) - it's another pub long gone. All that's left is the pub sign swinging in the wind on some plush new apartments. I guzzle a pint of Banoffee pale ale at Castle Rock's Willowbrook in Gedling before returning to HQ. 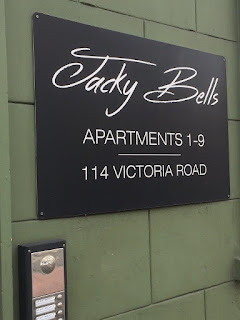 I'm back up on Mapperley Tops on Tuesday evening for an EMCL League cup tie between Gedling MW and Kimberley MW. I make my debut at the highly-rated 'Plains Fish Bar' and polish off a small portion of cod 'n chips, saturated in salt and vinegar, before viewing proceedings adjacent to the Gedling dugout with 'The Italian Stallion.' I've a lot of time for folk at Kimberley; they have an exciting young side too. Committee members like 'Hobbo' and Danny Staley are the salt of the earth and good people, with the club's best interests at heart. This warmth cannot be extended to their technical area, where potty-mouthed 'coaches' aim a tirade of verbal abuse at the officials for most of the evening. Silence is golden when the mercurial, fleet-footed, Jack Jepson puts the game to bed, leaving Kimberley MW on the receiving end of a 3-0 thumping. Perhaps the finger of blame should be squarely pointed at the players, after a below-par performance, instead of haranguing the 'men in black.'

It's deja vu on Wednesday. A  blustery evening is spent at the 'field of dreams' (Platt Lane, Keyworth). The Green Army second string give neighbouring Ruddington a 6-0 pasting - they deserve some good fortune after struggling in recent weeks. 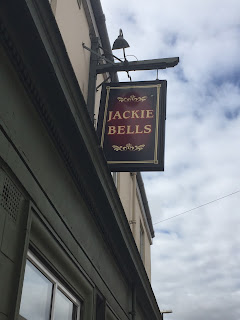 The old 'Barnet Fair' needs a trim. I peg it up to Wisdom Hairdressing on Mansfield Road. I love the lads from Kurdistan. I'm due next in the electric chair. It's just my luck that five lads with hipster beards all ask for a trim. It's nearly dusk when I finally leave the shop. There's always time for a quick couple of pints in the Herbert Kilpin and Fox and Grapes, before jumping on the No.25 bus home.

It's been on Sky Sports News that the 'Keyworth Georgie Best' (Sticky jnr, my eldest lad) has been drafted in from the wilderness for 'the Green Army Ressies.' His pre-match warm-up consists of planing down three doors and re-fitting them for Dad. 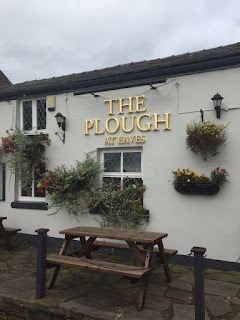 We can't really avoid the M6, as I've earmarked a Good Pub Guide entry close to Preston. I'm not sure what's worse: the standing traffic between junctions 18 and 20 or Graham Norton on Radio 2. We get a duff postcode for the pub and end up having a bust-up in the middle of nowhere (that's with the Sat Nav and Ms Moon). We're guided into the car park of the Plough at Eaves in Broughton by Ms Moon on Google maps.

It's a pleasant country tavern with a two-beamed bar and patterned carpet, reminiscent of an old Berni Inn. I have a cracking pint of Wainwright. We both enjoy a baguette before the short 15-minute journey to AFC Fylde's Coronation Way ground. 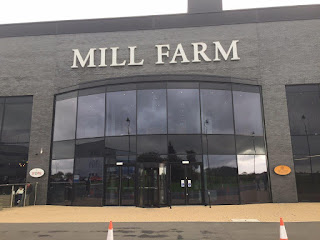 The Fylde is a coastal plain in Lancashire. It is a 13-mile square-shaped peninsula, bounded by Morecambe Bay to the north, the Ribble estuary to the south, the Irish Sea to the west and the Bowland hills to the east. A few well-known people from the area include The Police guitarist Andy Summers, former Blackpool, Manchester City and Spurs forward, Paul Stewart, 6 Music DJ Mary Anne Hobbs and rugby international Jason Robinson.

Jeez, we're in trouble now. Ms Moon has spotted an Aldi supermarket. We'll need to hire a forklift if Prosecco is on offer. I've already bagged a ticket, Ms Moon decides to make a weekend of it, so I've booked us into the Waddington Arms in the Forest of Bowland, up in the hills of Lancashire. 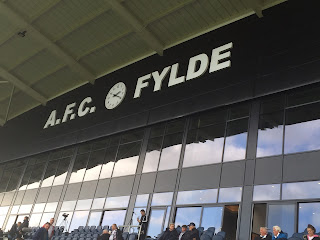 I catch the attention of a club official, smartly dressed in a blazer and trousers. "Do you work here, mate?" "Yes, I'm the Chief Executive." I blush after my faux pas, as we are pointed in the general direction of the turnstile for the West Stand.

It's £12 on the gate, £3 for a programme and £1 for a 50/50 ticket. The Mill Farm Sports Village is part of a £18 million development. After a meteoric rise up the Football Pyramid, the Coasters are toughing it out in the National Conference - the long journeys down south are taking their toll. 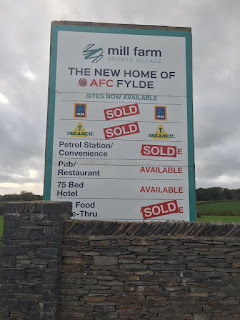 Today's visitors, Wrexham, make the relatively short 160 mile round trip from North Wales. I'm itching to visit their famous, old Racecourse Ground, but it'll be in the New Year before we finally take the plunge.

I'm not sure if the Fylde DJ has been on the prosecco from Aldi, as he plays the worst set since Dave Lee-Travis on Radio 1. 'Freed From Desire' is as good as it gets. Due to logistics, Ms Moon and I are four rows apart; she probably welcomes the break. I notice a few black clouds rolling in from the Irish Sea, as a stiff breeze blows across the ground. I've a couple of old dears sat behind me. Husband to wife: "Hasn't it turned out grand, love?" It warms the cockles of my heart.

Wrexham look the dog's doodahs in the early exchanges, as they attack the end where their raucous flock are stood. 30-year-old striker Chris Holroyd is leading the Fylde defence a merry dance. They lack the killer instinct. 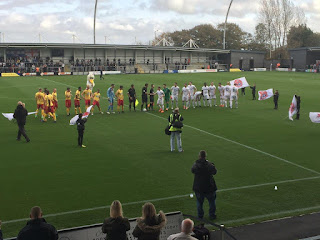 I've clocked Coasters' 11 jacket, Jack Muldoon. This boy gave his all for 'The Lincoln' last season, shining like a beacon in the Cup run. His unselfish running and interplay set up strike partner Danny Rowe for the opening goal.

There's a change at the break, the DJ's morphed into 6Music legend 'Steve Lamacq.' We're treated to 'Waterfall' by the Stone Roses and a few other indie toons. I've joined Ms Moon on Row M. She's complaining about the leg room. We've a few WAGS sat behind us who never comment about the football at any given time. Wrexham offer little in the second half; I thought they'd throw the kitchen sink at Fylde. Full back, James Jennings, their best player on show, gets frustrated when a flurry of crosses, he whips in, aren't attacked by a lacklustre forward line.

We escape a few minutes early as Fylde run the clock down. There's no chance of added time goals this week.

Man of the Match: George Edmundson (debut on loan from Oldham)
Posted by Sticky at 7:02 PM