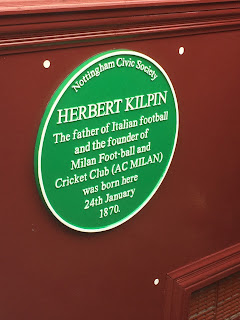 It's Sunday morning and we're lozzing around on the sofa, in the crib, watching the lads from Heartbeat mopping up another complex investigation on ITV2. I get all misty-eyed and turn on the tears. I'm really proud of Ventriss, Phil, Blaketon and the lads, it's not easy keeping the streets of Whitby clear of crime - I saw someone drop some litter there once in the harbour. It's been etched in memory forever. The lads from Aidensfield Police Station are on a longer unbeaten run that Brian Clough's Nottingham Forest.

Ms Moon has a monster abscess on her gum and isn't on the best of form - even Sticky Palms daren't take the rise. It's probably for the best not to mention any Shane McGowan gags and just blow away the cobwebs. I put on my Sunday best, at lunchtime, and head out of the door onto Carlton Road. I wander past the shops and the woeful Wetherspoons on Carlton Hill (just for you Trumpy) before turning right opposite Central College. I meander through St Ann's, (most folk quicken their pace), past Stonebridge City Farm, before crossing over Huntingdon Street and onto Mansfield Road. 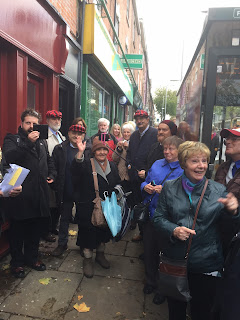 I'm puffed out readers. I gingerly walk through to the tap room of the Lincolnshire Poacher and order up a real ale. A few people begin to shuffle into the bar. One or two are sporting red and black scarves, similar to the old Manchester City kit (back in the day, when they were whack). Of course, it's no coincidence that I'm in this particular boozer today.

On the 24th January 1870, Herbert Kilpin, the son of a butcher, was born just a few blocks away from where I'm sat supping right now. Mum gave birth to 15 children. He worked in the lace industry and played football for the Garibaldi Reds on the Forest Recreation Ground (Goose Fair site). In 1891 Kilpin moved to Turin, Italy to work for a textile manufacturer. In 1898 he rocked up in Milan. A year later along with his friend Samuel Davies he founded the Milan Foot-Ball and Cricket Club. A.C.Milan was born. Today a plaque is to be unveiled outside his father's old butcher's shop. 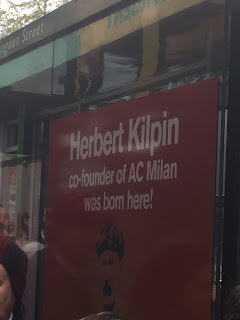 I sink my pint and make the short walk up to 191 Mansfield Road. A small congregation is gathered. I'm bitterly disappointed that less than 50 people have bothered to turn out to celebrate the extraordinary life of 'one of our own.' There's a witty speech from a county councillor; to be fair to the chap he did make me chuckle. The author of the book, titled the Lord of Milan, declines the opportunity of a few words - preferring to save that for the premiere showing of the film tonight at Nottingham Broadway cinema, that has sold out.

I pop into the Kilpin for a swift one. Milan are drawing 0-0 with bitter rivals Genoa. Their skipper has been sent off for a stray elbow. The Milan contingent aren't too chuffed to hear the news on their arrival. I tell them that Sticky Palms doesn't do 0-0s, before sloping off to the Fox and Grapes for a swift one. 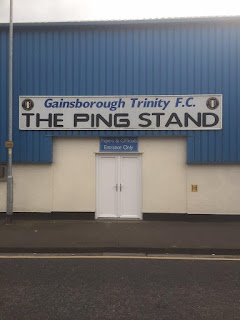 Tuesday evening is spent at one of my all-time favourites  (I sound like Bruce Forsyth, God bless him). Gainsborough Trinity are hosting AFC Telford. Northolme is a ground to die for and a must visit for any serious groundhopper. I wolf down steak pie, chips and mushy peas, before indulging in a bag of Haribos from the 'Sweet Shack.' I feel like retching up for most of the game, following a sugar rush. The match is fantastic and the win vital for Trinity. It was good to catch up with Phil, a diehard Gainsborough fan, who I talk to on twitter now and again.

Thursday and Friday are spent working in Shrewsbury and Peterborough. It's Friday teatime and I'm stood in a queue of 100 people with Ms Moon trying to gain access to 'LuvYa Babes' fancy dress shop in Nottingham's Victoria Centre. Jesus wept, I'm grumpy, I'm usually quaffing a few pints by now. We bag a couple of costumes for a party that top man Piers lays on each year in residential West Bridgford (more on that next week). 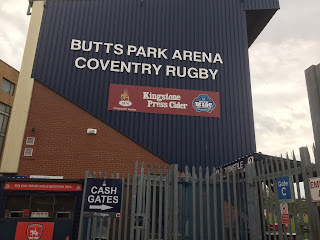 I'm toing and froing on whether to knock a few back tonight as it's Keyworth Cricket Club's presentation night. The Mayor of London has very kindly offered to put me up. The New Field of Dreams is packed to the rafters and at fever pitch as I snuck into the corner of the bar.

I get into a round with a few of the boys. After some brilliant, heart-warming speeches and raucous laughter, a sozzled Sticky Palms is called to the front, and a microphone thrust into his hand. I tell a couple of gags (someone laughed  .. I think), before presenting a trophy in memory of my Dad, to a 17-year-old lad who is the most exciting player Our Club has produced in three decades. Well done Sam Foster. I'm propping the bar up at 2:30am with 'The Mayor' - oh deary me, help me Lordy. 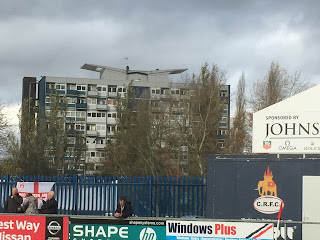 I haven't woken up at 11:15am for donkey's years, until today. Ms Moon is worried sick about me as I haven't returned her calls. The Red wine was a massive mistake at the fag end of the evening. I wonder how the ladies' team is this morning, as quite a few of them were in a 'two 'n eight' and '808 state.'

I land back in Carlton at 12:45pm to face the music with only a bacon cob and Costa coffee as a peace offering. Little is said by a quite cross Ms Moon. I'm literally sent to Coventry at one bells. I'm hoping Paul Gambacinni's Pick of the Pops can cheer up 'the Princess.' I pogo in the passenger seat to The Buzzcocks and Public Image to a less than impressed Ms Moon. 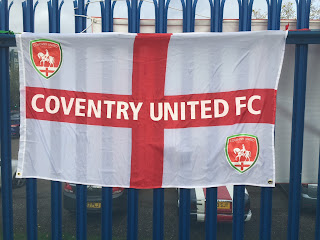 Have you ever heard of a 'dropped my bacon sandwich moment?' It's when an incident or saying of such magnitude occurs that causes you to drop the said product. This happens at bang on 1:35pm when 'Gambers' plays Rose Royce's classic 1978 hit 'Love Doesn't Live Here Anymore.' "This is not a patch on Jimmy Nail's version" remarks a deadpan Ms Moon - I drop the remains of my bacon sandwich into the footwell.

We enter the concrete jungle that is Coventry. The ground is in postcode CV1. Coventry is the ninth largest city in England with a population of over 350,000. The city suffered horrifically during the Blitz in 1940 when the German Luftwaffe destroyed the 14th Century Coventry Cathedral. It was also famous for it's car industry. Notable folk from 'Cov include: Bobby Gould, Callum Wilson, Ian Bell, Terry Hall, Hazel O'Connor and Paul King. 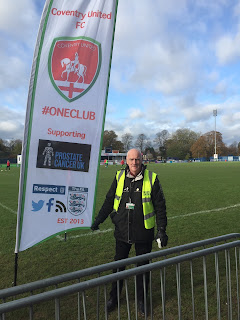 It's £15.50 on the gate, including a programme. From what I've gathered the club was formed after the decision was taken that Coventry City would be playing football in Northampton. We chance upon one of the loveliest blokes I've met in 15 years of groundhopping. Mel Davis is part of the safety team and on the supporters' club committee. We're given a potted history of Coventry United. The guy is passionate and in love with the club, as is his wife, Marian - it whets my appetite and gets my juices flowing.

I love Shepshed, they're one of my favourites (Brucie again). They are so welcoming up the Butt Hole (not a euphemism). 'Dave the Van Man' is here - he never misses a game. Folk like Dave keep Our game alive.

We sit in the plush stand which is shared with the Rugby Club. Shepshed are slow out of the blocks and play without tempo. Dynamo's keeper's hands are warmed. The visitors inch their way into the game. Shay Brennan up top is different gravy. I just watch him, forget the ball. He runs his socks off, twists and turns and holds the ball up. Nobody can break the deadlock. The highlight of the first half half is the two choo choo trains on the far side of the ground travelling in and out of the city. 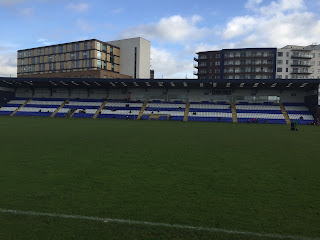 Ms Moon has a close call on the 50/50 draw as Black Betty from Ram Jam blares out the ground's PA system. The good lady reckons it's got 0-0 written all over it. I'll be having a tattoo soon saying I don't do 0-0s.

Coventry United score a beautiful free-kick and put the game to bed 15 minutes later for a well-deserved victory. Each goal is greeted with 'The Kids Are United' by Sham 69. I'm disappointed with a couple of the Shepshed backroom staff who are proper in the face of the 'linesman' - no need lads, no need at all.

Man of the Match: Cov 7 jacket