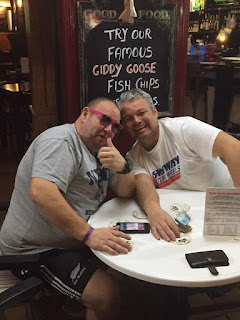 It's Friday morning and I'm driving up Westdale Lane in Gedling towards Mapperley Tops. I stick the car in Sainsbury's and briskly walk across the road, dressed only in a short-sleeved shirt and light blue denim shorts. It's bitterly cold as I push open the door of Copper Cafe, where my attire is met with raised eyebrows by the Darby and Joan Club. I'm soon tucking into a full English breakfast and a steaming hot cup of coffee.

I jump back in the car and head towards the south of the river Trent; there's no work today for Sticky Palms. I turn onto Wilford Industrial Estate and park up opposite Orrsum, a clothing distributor. I notice him burst out of the front door, wheeling his case and carrying a rucksack on his shoulder. You normally hear him before you see him - he being the Big Man - the artist formally known in this parish as 'White Van Man.' He's as happy as Larry, with a smile as wide as the Trent, and so am I when I finally hand over my keys to the meet and greet chap at East Midlands Airport.

There's not a soul about at security, there's a deathly hush about the place, as we hook up with 'Bruiser' Rotton and Moyesie in Frankie and Benny's. I have the obligatory couple of stiff Bombay Sapphire gins to calm my nerves before the four-hour flight to Tenerife. 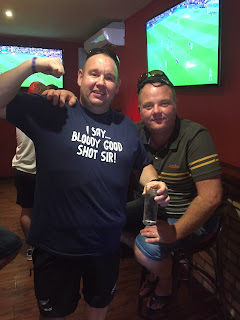 Ryanair have miraculously chanced upon an available pilot and even more ironically managed to take-off on time. I bury my head in my Kindle, only pausing occasionally to shout up a stewardess for more scoops. I grip my arm rests tightly as Captain Seamus somehow lands the chunk of metal on Tenerife South's runway.

We check-in at KN Columbus in the resort of Playa de las Americas - the Big Man and the boys have a season ticket here. There's a huge cheer poolside as the Big Man waves to 'Bungle' and the Cornish contingent - he seems to know ever bugger in the resort.

We get stuck into the all-inclusive that's on offer. There's a whistle-stop tour of pubs and clubs, that includes Leonardo's - the Big Man's favourite - girls pave the streets waiting for his autograph, such is his legend in the area of Arona. 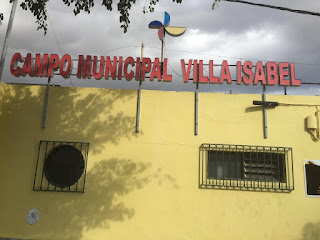 The night becomes hazy and uncoordinated for tour veteran Sticky Palms on his debut, after half a dozen goldfish bowls of Jeff Hendricks gin. There's no recollection of the walk of shame home. The evidence is on my phone in the morning, with Google Maps still open with directions to the hotel somehow typed in.

There are other casualties to report, some are flamed on social media. One of our party has fallen in a flowerbed, with his phone not on his person when awakening from his slumber. The stereotypical performance of  Englishmen abroad is there for all to see. A quick headcount confirms that all made it back, not without scrapes and scars to show, though.

I'm as rough as a Badger's arse, but don't want to cough up to the boys, as I'm sure I was the first to bail out. I've time to kill as I gingerly wander down to the seafront. There's a few white clouds kicking about as I punish myself with a 13km round walk to Costa Adeje in the baking heat. On my return to the hotel, after gulping 2 litres of water, I hail a cab and head inland towards the town of El Fraile. All the touring party are down Leonardo's watching Soccer Saturday, getting sozzled, soaking up the sun. 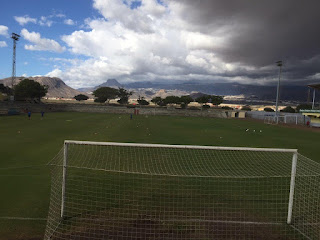 The taxi driver is a cracking lad. He's singing like a canary (get it) about how Chelsea striker Pedro was born in a village close by. He drops me outside the Campo Municipal Villa Isabel and promises to arrange a cab for my return home at 5:30pm.

I'm quite excited about my third tick-off in the Canary League, having already bagged at CD Marino and CD Buzanada. The lads will be praying it's a 0-0. I'll be crying like a baby if it is and will be on the first flight home.

It's 8 Euros on the gate. I'm sporting a Panama hat and stick out like a sore thumb. Every local knows I'm English and seem amused by this pale-coloured, pot-bellied chap and his manbag. A bottle of Rioja or Spanish sherry are the raffle prizes - if I win I'll give it to 'Bungle' or 'Moyesie' who'll down in one and make Trumpy Bolton look like a shandy drinker. 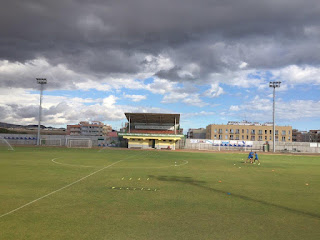 The ground is an absolute snorter. Mahon beer is on tap in the outside bar, which is doing a roaring trade. The vantage points are amazing. Three sides have deep concrete steps with a wall you can sit on. On the opposite side of the ground is a stand, perched above the changing rooms. The view out to the mountains is breathtaking, despite the filthy black clouds.

I'm stressing about 'The Lincoln' who have a stinking draw in the FA Cup away at AFC Wimbledon. It's with good reason too, as they fall behind early doors, as do UD Ibarra following a thumping volley from the visiting forward after a pinpoint left-footed cross from an overlapping full back.

The music from the PA is bloody awful. I'd settle for some Julio Inglesis or heaven forbid, Sam Smith, right now. I foolishly swap ends at the break thinking the visitors will push on, but Ibarra are a plucky bunch, and cheered on by their beer-fuelled supporters, deservedly equalize. 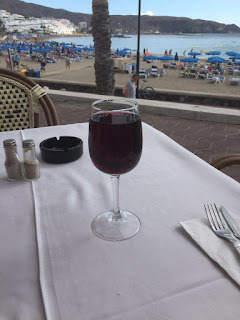 There's about 10 minutes remaining as I poke my head out of the exit and see a taxi with its meter running, but driverless. I see a bloke with a blue shirt on watching the game, he confirms it's his taxi. I hate leaving early but don't want ripping off with a taxi fare. I'm mortified later to find out the final score was 2-2; bloody hell I'm not telling our lot, they'll rip me to shreds.

It's carnage back at the hotel. 'Bungle' is spangled after an early session down at Leonardo's watching his beloved Leicester. The troops regroup and have a cracking night out in the resort, with the highlight being Rotton and Sticky Palms throwing some shapes on the Magic Bar dance floor before an overload of Hendricks curtails my evening once again.

I plummet to an all-time low on Sunday night. I went on my lonesome for a stroll up to Los Cristianos at lunchtime. Facebook and texts lured me up to Leonardo's at 3:30pm for 'Super Sunday.' Bruiser and I are met with utter bedlam. Rotton is sinking tin after tin of Guinness down in one, 'Bungle' is speechless again and Moyesie is drinking like a fish. 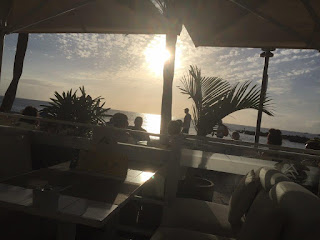 After spanking the Hendricks on the sun-drenched bar patio with Bruiser and a mate of Mark Crossley's from Barnsley, I somehow find myself back in the comfort of my hotel room. I call Ms Moon before saying goodnight. I take a look at the time on my phone, it isn't even 8:30pm. The shame of it, asleep before Wild at Heart.

It's a bit quiet around the poolside on Monday morning. One or two of the boys got battered as the post-mortems begin. The Big Man's not happy. Moyesie burst into the room at the crack of dawn after another heavy session and chanced upon one of BM's ham and cheese filled baguettes in the fridge. He pleads with BM to let him have a bite. A grumpy BM declines his request. Moyesie starts clapping his hands and singing at the top of his voice "Halves it, Halves it, Halves it." Nobody messes with the Big Man's food.

The highlight of the day on Monday is cocktails at the Papagayo Beach Club, watching the sunset, but even that ends in tears much to the amusement of Sticky Palms who called it an hour ago - let's put it this way, patience isn't a virtue for some of us. 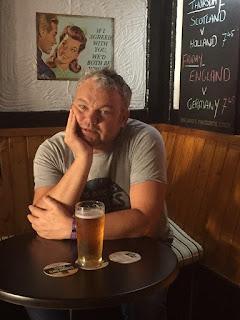 The Big Man is sporting a pair of pink sunglasses at Leonardo's. He's approached by a 'Lucky Lucky Man' to see if he wants to buy a handbag. The bar is in uproar as the Big Man refuses to shake the guy's hand. After a chorus of boos, he finally relents.

I put a decent shift in on Monday night, but nobody can live with Moyesie, who could drink Phil Mitchell under the table, as well as talk the hind legs off a donkey (and that's coming from me  ..lol)
He's a lovely bloke and shares a mutual interest in Herbert Kilpin, the co-founder of A.C. Milan, as well as wearing some well cool T-Shirts that I need to get the website from him.

Lads' Lunch at Hard Rock Cafe is my final contribution to the holiday. After a three course meal, carafe after carafe of red wine and cocktails on the rooftop, it's another early night for Sticky P and his upset tummy.

Moyesie has time for a lager with his breakfast on Wednesday following a sixteen-hour bender before we jump in a cab and head home.

Man of the Match: Sean Moyes. Needs a drink-off with blog legend Trumpy Bolton
Posted by Sticky at 7:58 PM