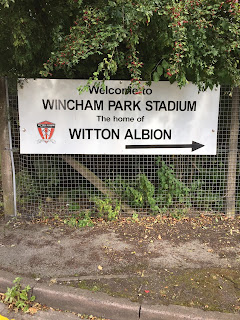 It's Saturday evening and we're chillaxing on a sun-soaked patio at a plush Lincolnshire boutique hotel, close to the town of Louth. I'm necking a few ales from a Horncastle microbrewery, eulogising and celebrating a Horncastle Town 3-1 win at The Wong and the Imps' 4-1 dusting of Carlisle United at Sincil Bank. Ms Moon is on the bubbles.

Horncastle Town was an experience to die for. I'll definitely keep my beady eye on their progress.  A few more alcoholic beverages are consumed at a local golf club as we join in the wedding celebrations of one of Ms Moon's family.

A fragile Sticky blows away the cobwebs on Sunday lunchtime with a walk up to the Northern version of West Bridgford, a place called Mapperley Tops, on the outskirts of Nottingham (it's nowhere near as pretentious). It's where legendary former Notts County and Liverpool striker Tony Hateley (father of Mark) once lived - and the recently deceased mother of Freddie Mercury. 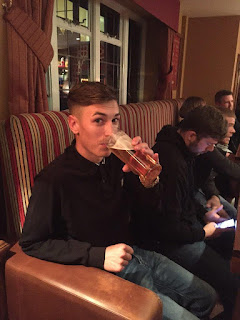 I gasp for air as I push open the front door of The Old Flower Shop - Nottingham folk will be aware of Cavendish Road - the final 200 metres is up there with Ben Nevis, Lincoln's Steep Hill and Cherry Hill in Keyworth. I neck a few more beers at a posh Wetherspoons called the Woodthorpe Top and the spit and sawdust bar of the Bread and Bitter, before the long, hard slog back home (downhill).

I have a revisit to Gedling Miners' Welfare on Tuesday evening; coincidentally it's on Mapperley Tops. I receive a warm welcome from club press officer Tony Hay; one of the nicest guys on the circuit. I remember seeing a blood-thirsty FA Vase cup tie here back in 2008, when big-time Charlies Atherstone Town rocked up in a posh coach and got turned over by the Miners 3-2. It whetted my appetite for Non-League football forever.

I hook up with 'The Taxman' and 'The Italian Stallion' (Roberto). I predict a 1-1 draw - it's 4-2 to Gedling at the break; it's the reason why I never bet. It's wonderful entertainment as Gedling add a further goal. I'm back home for News at Ten with Reginald Bosanquet. 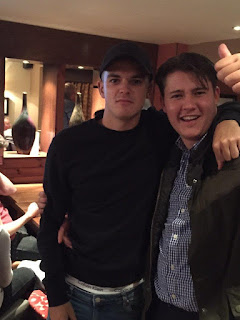 Wednesday and Thursday are hard yakka. I tumble out of bed at the crack of dawn. I'm down the Smoke for two days on the spin on the choo-choo. - I hate the bloody place, everyone looks so bloody miserable. EastEnders scriptwriters have got it spot on. I love it when Radiohead or Muse are on the Queen Vic jukebox; it proper cheers me up.

Ms Moon's daughter, Becky, is back from a year's travelling in Australia - unlike that empty head Ryan Thomas (Jason Grimshaw off Corrie) she hasn't landed a part in the soap opera Neighbours. Mum and daughter sink a few glasses of prosecco on Friday tea-time as Sticky heads out to one of his old haunts, the village of Keyworth, in south Notts, where former Labour Chancellor Ed Balls grew up. Fast bowlers Sir Richard Hadlee and Franklyn Stephenson once lived in the village too. 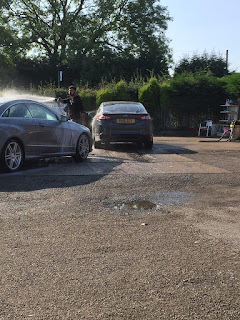 A Stella-fuelled 'Mayor of London' is holding court in the Keyworth Tavern. There's a pleasant surprise for Sticky Palms as both of my lads rock up for the Malta v England game. 'The Keyworth Georgie Best' (Sticky Junior) has had a few sherbets in town celebrating a pal's birthday - he keeps clutching his hamstring. It's great to see all the lads I used to coach. It upsets me that not many lace up their boots these days.

I'm up at the Stanton-on-the-Wolds car wash on Saturday morning. Christ, if those Kosovan/Serbian lads at the North Bridgford 'Meadows Wash' find out about this treacherous act, they'll have my guts for garters. The Kurdish lads do a cracking job, as I admire their work from a distance with a Bounty bar and cup of coffee. 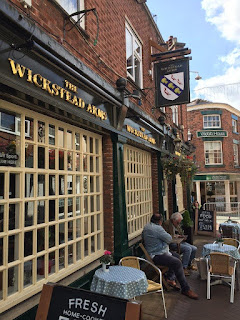 It's 10:15 am and Trumpy Bolton is swinging his Co-op carrier bag full of booty (cider) as he passes the time of day with his next door neighbour. I'm impressed with his new set (young people's speak for clothing.) His Cotton Traders tracky bottoms have been skipped and replaced with a striped T-shirt and blue shorts from Littlewoods. He's also splashed out on some slight seconds Adidas trainers.

The blog legend is waxing lyrical about a recent sojourn up to 'Bonnie Scotland' with Mrs Trumpy. He was greeted by bagpipes as he entered the '19th hole' at Gleneagles sporting a King Power Leicester kit. He had to be revived with a glass of brandy having shelled out £10 for a glass of wine for the long suffering Mrs Trumpy. 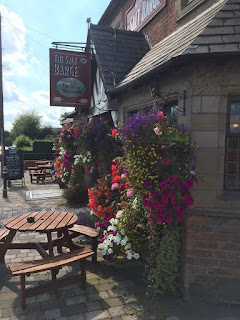 We avoid the M6 like the plague and Mel Sykes and Alan Carr on Radio 2. Trumpy clocked on Facebook that I'd been dragged up to Ikea on Bank Holiday Monday by 'the Princess.' He said Ikea shares on FTSE went through the roof after we'd checked-out from the till.

The Sat Nav is a sea of red as we head over the Staffordshire border into Cheshire. I glance into my mirror and see a procession of blue lights hurtling towards us. Some poor sod has been knocked off his bicycle and looks in a sorry state. 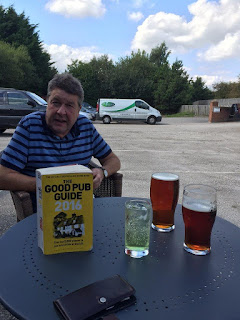 A mile down the road, in suburban Cheshire, Trumpy clocks a chubby, balding chap at the bus stop. Deadpan he pipes up. "Is that Wayne Rooney?" I'm still crying with laughter as we park up in Nantwich, a former salt-producing market town. We snake our way through the jam-packed streets and enjoy some lunch in the Wickstead Arms, despite the awful 1950s music.

Bolton has scribbled down a list of pubs he has an interest in. Witton Albion and South Shields fans will be taken aback to know that Trumpy's obsession in life is to tick off a pub in every village, town and city in the United Kingdom - he is 95% of the way to achieving this monumental feat. 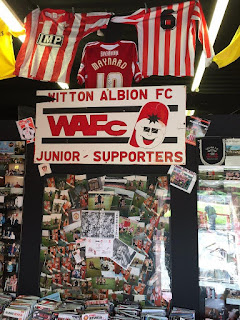 Trumpy has three more pints at the Salt Box, just a few miles away from the ground. I've been drinking lime and soda. The legend asks me if I'd like a tray of lime shots to be lined-up. We park up on the main drag about a ten-minute walk away from Wincham Park, the home of Witton Albion, on the outskirts of Northwich. The Killers are blasting out of the PA as Trumpy generously parts with £20 on the gate to gain admission for us both

The ground is neat, tidy, mostly red painted, with cover on four sides. I had to deliver the bad news, publicly on social networks yesterday, that Witton Albion had announced that the bar was to be shut during the game - of course Trumpy took it badly. Even the away fans from the North East (was flamed for saying Newcastle) are having to suffer crowd segregation - FA decision or not, it's bloody ridiculous. 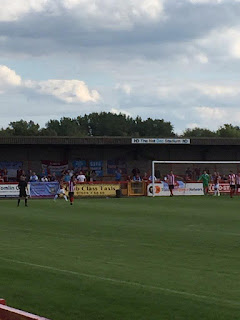 We take a pew in the stand, that's saturated in late summer sunshine. I viewed Witton up at Workington last week. They lacked creativity and penetration in the final third. South Shields, from the Newcastle area, have the subliminal Argentinian Julio Arca in their ranks. The 36-year-old played over 300 games for Sunderland and Middlesbrough.

I fancy South Shields to progress further in this FA Cup tie, a supporter had earlier told me that they've been unbeaten since last November. They are managed by former Aston Villa and Leicester City attacking midfielder Graham Fenton. 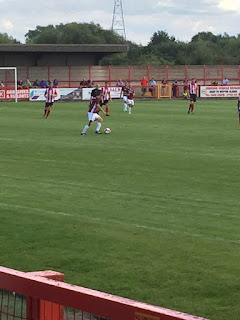 The first half is lacklustre with neither side having a cutting edge in the final third. The excitable visiting supporters, behind the far goal, will be happy with the clean sheet at the break. There's a slightly controversial moment when a mistimed tackle by the visiting number 10 results in a yellow card, with the unfortunate recipient being stretchered off - there's no malice intended, it's more clumsy than anything. The gobshite behind me would beg to differ. Minutes later she shouts (with her five-year-old son sat next to her playing games on his iPhone) "Snap his legs, the cheating scum."

Trumpy Bolton has been 'missing in action' for a while now. The crafty sod has breached security and pitched up in the bar. He returns to his seat to see the mercurial Julio Arca strut his stuff. His legs may have gone, but his brain is fully engaged - that's Arca not Bolton. He pirouettes, drags back the ball, finds pockets of space and passes through the eye of needle. It's beautiful to watch.

Only one team will win this as Fenton executes his gameplan to perfection. Witton are tiring as the visitors throw on a sub with searing pace and intelligence. The away fans go wild as both goals are clinically dispatched to put them in the hat for Monday's draw and £3000 prize money for their long journey.

Men of the Match: Trumpy and Julio

We don't take kindly to being called a Newcastle area team. Not even Geordies. We are proud Sandancers!