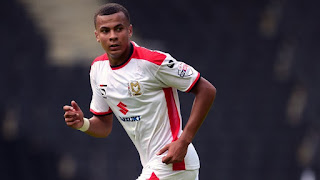 The hotels in Oxford are ridiculously overpriced. We stop the night at a Premier Inn, four miles outside the city centre, at a third of the price. A taxi into Oxford is only £8. I sink a pint of real ale in the courtyard of one of the city's oldest pubs, the Turf Tavern, where a list of the rich and famous who have walked through their doors is chalked up on a blackboard. We sit on a wall, basking in the late evening sunshine in the beer garden of the Bear, which dates back to 1242. Drinks continue to flow at the four-floored Varsity Club, with its long list of cocktails and gin palace. There's time for a couple more drinks at the poshest 'Spoons in Oxford, before retiring to our room accompanied by kebab meat and chips.

I've lots of meetings on the road with work this week, and I'm only able to squeeze in the one Non-League game. The setting is sensational, though, with Matlock's Riber Castle providing the backdrop. I pull into the Cricket Club car park an hour before kick-off. A friendly steward tips me the wink of a chippy up the road. "Don't kick my head in, youth, if it's rubbish, will you?" The fish and chips are to die for; I don't even leave a batter bit on my tray. I give my man the thumbs up on my return to the car park - he cowers in jest. 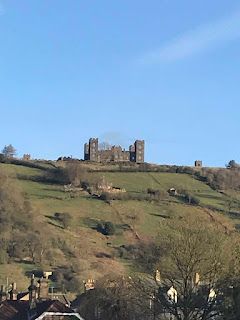 It turns chilly as the sun drops at Matlock Town's Causeway Lane ground. I hook up with Big D (Dick Durrant) whose son, Ross, is in the nets for the Gladiators. Big spending Basford United are tonight's visitors in this Northern Premier League clash - they have recently parted company with their long-serving manager Martin Carruthers.

Basford will wonder how they've only come away with a point after dominating the game throughout. They have experienced campaigners Matt Thornhill and Liam Hearn in their ranks, who influence the game. Two late goals by Matlock earn them a point, when all looked lost. Dick and I enjoy some craic. He gives me the heads up on Budapest, where I'm due to visit in early June. 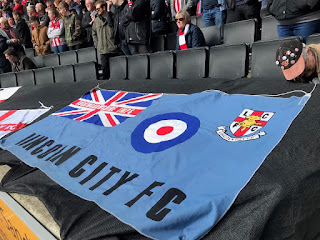 The MK Dons game has been on my mind for most of the week. If the Imps can avoid defeat then surely the title is within their grasp. I've only ever been to Milton Keynes once in my life, back in 2006, when Nottingham Forest lost 1-0 at the National Hockey Stadium. We were housed in a temporary stand behind the goal that evening. Every time the fans stamped their feet the stand began to shake, wobble and move. I remember eating tea in a pizzeria in Centre MK: and being unable to find a pub in the weird, visionary grid road system that was put in place.

I binge watch the brilliant After Life, starring Ricky Gervais, on Netflix, whilst perusing the runners and riders for the Aintree Grand National, hanging on the coat tails of the professional gambler who saw me bring home the bacon during the Cheltenham Festival - he actually says Tiger Roll will win, but isn't happy to back him at such a short price. 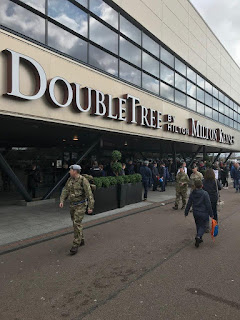 Early on Friday evening, I shift a couple of pints of craft ale at the wonderful Lincoln Green, Brickyard pub, on top of Carlton Hill, two miles outside Nottingham city centre. I peg it back home, full steam ahead, down the hill, just in time to catch the Southampton v Liverpool game. The Saints give a good account of themselves before getting caught out twice on the break, through Mo Salah and Jordan Henderson. I retire to bed and flick through a few pages of ex England cricketer Graeme Swann's entertaining autobiography.

Ms Moon returns home in the early hours after session on with her friend Jill up on Mapperley Tops. The Marks and Spencer's Lincolnshire sausages (an omen) are sizzling under the grill as I head down to Carlton Tesco to pick up the crusty cobs and Calzone cheese. 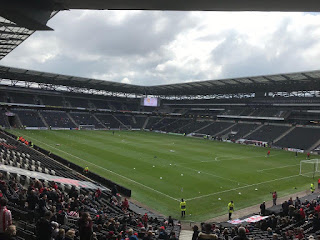 There's a coffee stop-off at Clifton, as a hungover Ms Moon drinks the place dry of Latte. The journey to Milton Keynes looks pretty straightforward on paper, but I'm wary of any delays on the M1. As per usual we end up at the ground two hours before kick-off. Imps' fans have been pre-warned of traffic chaos in the vicinity.

The MK Stadium is situated in a sea of retail parks and industrial estates. We do a full reconnaissance of the area before parking up at the back end of a business park, a full fifteen walk to the ground. I'm already not enjoying the experience. There's not your normal pub lunch followed by a stretch of the legs around a town centre, before heading past terraced-housing on tight back streets with cobbled roads, like you do at Sincil Bank. 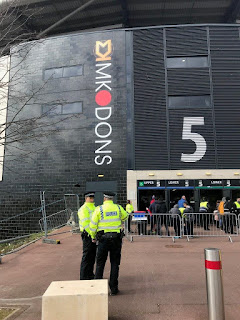 I watch Non-League football most weekends. I love the community-feel good factor, the volunteers, the atmosphere in the cosy clubhouse, the raffle and 50/50 draw and how a club is situated in the heart of the town or village. Stadium MK (yuk) isn't even in Milton Keynes; it's situated in Bletchley, famous for Alan Turing's Enigma code-breaking machines during the Second World War. Turing, a man ostracised for being homosexual, was outed and humiliated; he accepted chemical castration as an alternative to a prison sentence. He died from cyanide poisoning in 1954. At an inquest, the coroner recorded a verdict of suicide. Queen Elizabeth II granted Turing a posthumous pardon in 2013.

Milton Keynes is in Buckinghamshire and was a designated New Town in the 1960s. It has a population of just under 250,000. Born and bred include: the footballer Dele Alli, Somerset cricketer James Hildreth and long jump Olympic Gold medallist Greg Rutherford. 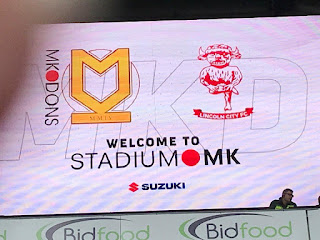 Milton Keynes FC were 'founded' (reinvented) in 2004 - they stole the identity of Wimbledon FC, who were 'relocated.' The well-respected football magazine When Saturday Comes used to refuse to recognize them when they published their season review each August.

I'm in a filthy mood as the nerves and anxiety kick in at the magnitude of the game. Ms Moon, recognizing this trait, grasps the opportunity of some retail therapy and slopes off to ASDA for some 'coffee.' Marco chuffing Pierre White has got a restaurant here - I just want pie, mushy peas and mint sauce on a tray. Who the hell eats steak before a big game apart from Matt Rhead? - "raw please Marco, if you're asking?" 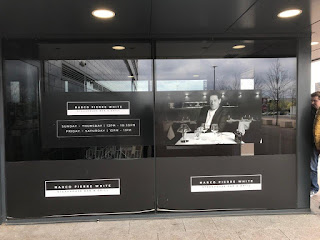 I leg it around the stadium in search of the Dele Alli statue; sadly there isn't one, well not until the add-ons kick in after a move to Spain. I pick up a programme for £3 before meeting Ms Moon outside Gate 3, minus the George bags (phew).

The tickets were £22 a pop for the 'Non-Signing Section.' The stewards are really friendly. Much to my amusement Ms Moon is frisked and her handbag is pilfered through - it's full of screwed up Costa coffee cups. 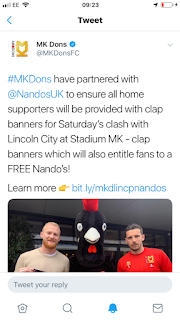 MK 'Dons', clearly threatened by a 5,500 away following have handed out Clappers and in conjunction with Nando's, free chicken, as the top two in League 2 go toe to toe. We are on the front row, with an excellent view. I get chatting to a steward (on his debut) and ask him if it's ok to jump the barrier if WE score a last minute winner. Deadpan, he tells me I'll get arrested.

The teams file out to a version of the 1969 hit 'Come Together by The Beatles - 35 years before MK Dons were formed.  My stomach tightens, vision is blurred and my heart beats ten to the dozen - it only happens when I coach, or watch 'The Lincoln.' The Imps are sporting a fetching all-grey away strip. Our Colossus, skipper Jason Shackell, has returned from injury. He replaces Cian Bolger, who can feel hard done by, after some sterling displays at the heart of the defence.

I get chinwagging to a lovely, old guy sitting next to me, who has travelled up from Sussex. He mentions that two players out of Lincoln's backline played together in the Premier League for Blackpool - Matt Gilks and Neil Eardley (signing of the Century). 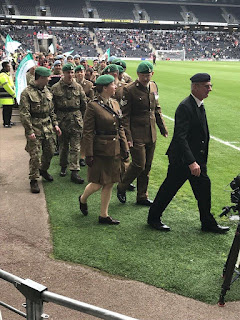 'The Lincoln' are in great voice. After three minutes they sing 'You've Got No History' and follow it up with 'You're Only Here for the Nando's" The Imps see off early pressure and grow into the game, with Big John Akinde asking some questions. MK seem intent on scything down their opponents. It happens one too many times, when the lively Shay McCartan skips past his marker, only to be hampered. Akinde, as cool as Clough, strokes home the penalty.

Ms Moon makes a dart to the snack bar, trotting back ten minutes later with a bag of crisps and a Twix bar, but £2.80 lighter - should have stocked up at ASDA  .. lol.  At half-time, the whole ground rise as one to applaud, as participants from the Level Playing Field, a charity for disabled sports fans, do a circuit of the ground. It's a touching moment, with the parade also including members of the armed forces too. 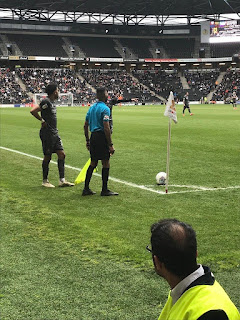 'City' are under the cosh in the second half, as MK take a grip-like vice on the game. Wave after wave of attacks and crosses are defended stoically by the Imps' backline. Veteran 'keeper Gilks pulls off an astonishing point-blank save with minutes remaining. The good lady asks if 'Rheady' is warming-up. I reply that he's probably getting seconds in the queue at Nando's.

Ms Moon has very kindly shot off to pick up the car as it will be bedlam after the game. As I sidle out of my seat and race up the steps, Lincoln's Portuguese-born winger, Bruno Andrade, rifles home a shot to send the masses into delirium and the Imps a step closer to League One football.

Man of the Match: Mark O'Hara