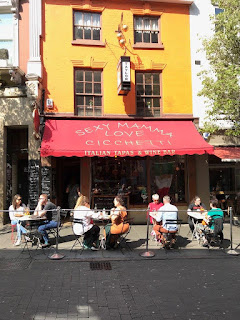 I've been tipped the wink of a 'ground to die for' out in Staffordshire by a Stokie groundhopper. It's located just outside the city centre. Prior to the game, I grab a bite to eat at a ghastly Marston's pub, close to the ground. Foley Meir are playing their final game of the season against Eastwood Hanley in the Staffordshire County Senior League. It's £2 on the gate, which includes a free programme. The views are breathtaking, looking out over the city centre, where Stoke Minster sticks out like a sore thumb. I do a full lap of the McIntosh Arena before taking up a vantage point on top of a mound above the dugouts.

Foley Meir football their visitors off the park in the first half, and are soon two to the good. An extraordinary incident happens midway through the game. The visiting striker has had a bit of rough and tumble with a home defender. He exchanges words with the Foley Meir manager; it's much ado about nothing until he starts swearing uncontrollably before firing over a mouthful of saliva in the direction of the Meir bench. A young referee's assistant bottles it, whilst the man in black claims to have not witnessed the incident. Thankfully the Eastwood Hanley coach sees sense and removes the perpetrator from the field of play. Foley Meir go on to win the game 4-1. 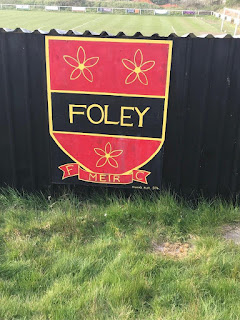 I'm in the car, driving back across to Nottingham. I flick on Five Live; Sticky's favourite commentator, Big John Murray, is in situ at the Etihad Stadium for the Man City v Spurs, Champions League quarter-final 2nd leg. Murray says it's 2-2, I look at the clock, it's 8.12. pm; that can't be right? What the Dickens is going off?

I burst through the French window patio door, back at HQ, an hour later. I glance at the TV, Ms Moon is watching this morning's episode of Jeremy Kyle - pray for Sticky readers. "This is wack, can we watch the second half of the Champions League, please Princess? I have to justify the BT Sport subscription fee." The game is pure theatre which builds to a crescendo with an unbelievable ending. Good old VAR, eh? 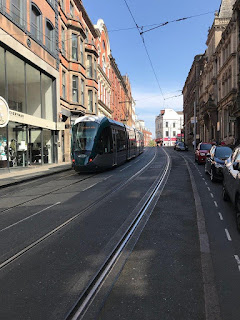 I had the opportunity (green light) to drive up to Carlisle United's Brunton Park, to hopefully watch Lincoln City clinch the Division 4 championship. The thought of jam-packed motorways and caravans being towed along at 40mph, whilst the occupants admire the Lake District scenery, has turned me right off. Instead, we spend a gorgeous, sun-drenched day in Nottingham. We eat al fresco at Sexy Mamma Love Cichetti in Hockley, a hipster area of Nottingham. Killing time before watching a film, we bask in the sunshine at the Hockley Rebel, where I sink a pint from the Tiny Rebel stable based in Newport, South Wales.

I switch my phone off as we enter the Broadway Cinema, just shy of 3 p.m. Two thousand of Lincoln's flock will be biting their fingernails, whilst we watch, Wild Rose, starring Julie Walters and Radio 2's 'Whispering Bob Harris.' It's a feel-good film set in Glasgow; we both thoroughly enjoy it. On the way out I slip into the gents and switch my phone back on - ten man Lincoln have lost 1-0. I commiserate with a couple of real ales in Sneinton Market and a few more at HQ - The Brickyard in Carlton. I took a punt on them at 8/1 back in July. Nowt daft though, just £5 each way. 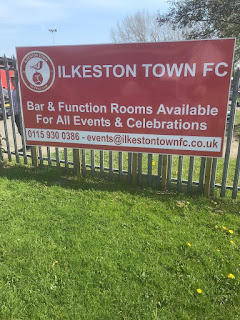 Saturday morning is spent at Brookfields Garden Centre, up at Mapperley Plains, a posh area of Notts where Freddie Mercury's mum lived, until her death at 94 years old, in November 2016.  We buy a couple of rose bushes as I continue to reconstruct (blag it) the garden. I wave Ms Moon off at twelve bells; she's spending the night with her daughter in Cheltenham.

Apologies folks, I've gone big time on the snap front. I break into the packaging of a pretentious Wensleydale and carrot chutney sandwich on soft, malted bread from the Marks and Spencer food hall on the drive up to Ilkeston. Paul Gambacinni is playing the cringeworthy 'Honey' by Bobby Goldsboro on Radio 2's Pick of the Pops. It somehow reached No.2 in the charts in 1975 - cough up now folks if you shelled out 50p for this garbage. 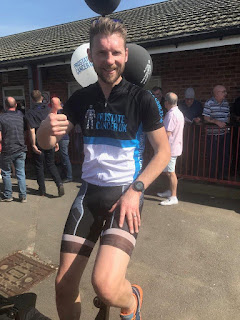 I was going to have a quick pint in either the Burnt Pig or Spanish Bar, but 'Ilson' are expecting a crowd in excess of 1,000, so parking might be tricky. I swerve an ale and join the queue to park in the ground. The parking attendant is oblivious to the traffic blocking the main road as he talks to all and sundry about the weather and what a nice Easter he's having. I part with £2 and I'm told to find a spot at the back of the ground.

The glorious weather has flushed out the locals as they turn out in their droves - there's an easy 1500 in attendance here. It's £5 on the gate. I buy a 50/50 ticket and grab a team sheet. I bump into Martyn Cheatle and Simon Morgan who are raising money and awareness for prostate cancer, by cycling from Barnsley to Amsterdam. I mention that Walsall Wood are dangerous opponents and I think they will win the game. 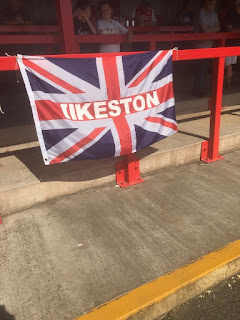 The 'Ilson' 'Ken Bruce' plays it safe with a few pre-match tunes toons from George Ezra, Rag'n'Bone Man and Jack Savoretti - I prefer it more leftfield myself, like a lot of northern Non-League disc jockeys do.

A win today for Ilson will see them pretty much assured Step 4 football next season. Former Aston Villa striker, Darren Byfield, Walsall Wood's manager, will send out his troops all guns blazing. This is how it pans out. Ilson are under the cosh from the start and their defence are asked questions. 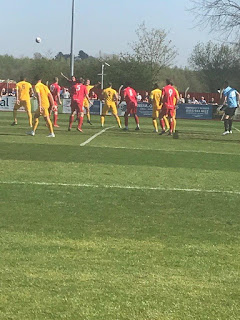 Walsall Wood race into a three-goal lead within the first half an hour, following some pitiful defending. I'm unsure if it's stage fright, incompetence or a lack of tactical nous, but the Robins fall well short. Wood's left winger John Atherton is running rings around the Ilson full back who is hooked on 25 minutes, as are two more players during the break. There's a fourth sub at half-time as 'Ken Bruce' is replaced by 'Steve Lamacq' who pumps up the crowd with Primal Scream and The Hives.

I've been chatting to a hungover Aston Villa fan who spent yesterday on the sauce up in Bolton watching Villa continue their charge up the Championship table. I mention that I saw them pass Martin O'Neill's Nottingham Forest off the park a few weeks ago. I clock Ilkeston Town owner Alan Hardy wandering around the ground (probably in a daze) with a phone glued to his ear. Notts County coach and former 'Ilson' manager, Steve Chettle, hangs onto his coat-tails.

Ilson are having one of those days. A chink of light emerges on 65 minutes when they win a penalty and Wood are reduced to ten men. Jamie Walker fluffs his lines, his spot kick is hit with little conviction and is easily saved. Wood go for the jugular and score the goal of the game, despite being one man light, through Kaylum Mitchell, which puts them top of the table with a plus-one goal difference.

Man of the Match: John Atherton