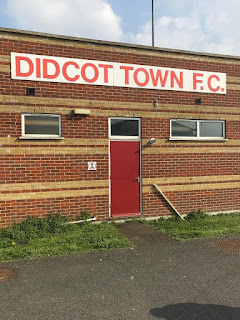 The Big Man and I have witnessed an absolute humdinger of a game at Worksop Town's Sandy Lane, as the top two teams in the Northern Counties East League cross swords. I'm back in sunny Carlton well before 6pm. Ms Moon whisks me up to 'Spoons on Carlton Hill; it's cheap, cheerful and rowdy. A pint of Strongbow cider and an Elsie Mo from the Castle Rock Brewery is £3.98 for two drinks, with my 50p off CAMRA vouchers. This is in stark contrast to the pint of Arbor, a Bristol-based craft ale, that I'm necking an hour later at the splendid Brickyard, 50 yards up the road, at £6.46 - what's the mark up on that?

It's a glorious Sunday morning as a group of friends are gathered outside the derelict Red Lion public house in the village of Stathern, out in the Vale of Belvoir, in Leicestershire. The Test Match Special radio commentator, Jonathan Agnew, lives just down the road in Waltham on the Wolds. Gold Cup winner and housewives' favourite, Desert Orchid, used to spend his holidays in nearby Ad Kettleby. 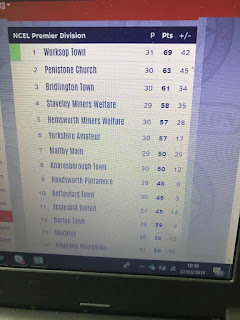 The Big Man is chairman of the Groundhoppers' Sunday Walking Club. It's a tough old hike up Tofts Hill. There are stunning and breathtaking views looking out towards Belvoir Castle. We're feeling it in our legs when we arrive back in the village a few hours later. A pleasant lunch is spent at the Nags Head in Harby - a place I used to frequent with 'Lord Geoffrey' when I was holed up at his 'Southfork Ranch' for three months back in 2015.

Tuesday evening is spent at Radford FC's Selhurst Street ground in the heart of Nottingham's inner city. It is without a doubt one of my favourite all-time grounds. I'm usually on the receiving end of a verbal volley or two from Radford manager, Big Glenn Russell, as I'm a somewhat Jonah on his team - there's no sign of Big GR tonight; rumour has it he is serving a one-match stadium ban following an altercation with an official earlier in the year - that sounds totally out of character?  I text him five times during the evening to let him know his team have been soundly beaten 4-1 by Heanor Town. The highlight of the night is tucking into John Harris's bag of Revels - Sticky bags a coffee and a toffee one with one free dip. To be fair to Heanor, their third goal, a volley thumped home by Kyle Daley is a contender for goal of the season. 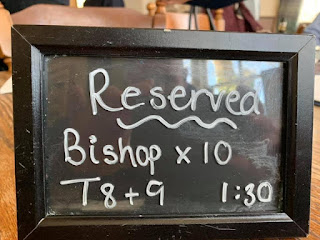 I sail up the M1 on Wednesday evening before exiting at Junction 27. Destination tonight is Selston FC's Parish Hall ground; another personal favourite of Sticky Palms. I stand behind the goal on the 'Spion Kop' - it has about six concrete steps. Selston chairman J C McKeith always gives me a warm welcome. He once insisted, during a Notts Senior League groundhop, that the lasses in the kitchen mashed my tea in a teapot - it was the finest brew that I've ever supped.

I catch up with legendary Hucknall groundhopper Malc 'the Bearded Wonder' Storer. He's such a lovely, warm chap and the fountain of all football knowledge in this neck of the woods. Malc' does so much to promote the Notts Non-League scene through social media - check him out on Twitter folks; his work is tireless @ontheroadblog 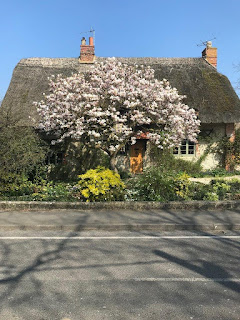 Clifton All Whites and the longest-serving manager in the universe, James 'Tosh' Turner are in town tonight. I grab a quick word with the wee baldy man at the break - he denies blanking me at Belper a few weeks back. He has a grin from ear to ear. His patched up side are 1-0 up against the League leaders. The Bells Whiskey Manager of the Month award beckons.

Tosh has changed since he moved to West Bridgford. A hipster beard has suddenly sprung up and he's even started drinking Porter. He's suffering from a touch of jet lag after a long weekend in New York - it's another thing the jet set folk of Bridgford like to boast of too - only joking Tosh .. lol.

That grin gets bigger on 80 minutes when Nathan Kelly puts them two to the good. In a breathtaking finale, Selston claw two goals back and miss further gilt-edged chances before the referee blows the final whistle. Tosh will still be chipper because that's the nature of the man; he's a glass half full sort of guy. 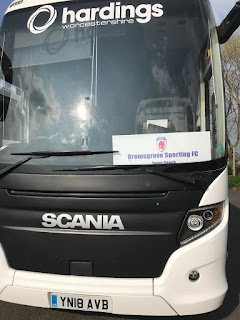 I meet Ms Moon for a few scoops on Thursday evening before we settle in for the night. We watch a depressing documentary about the 'Babes in the Woods' murders. A local man, Russell Bishop, is sensationally and mistakingly cleared of the murders of two nine-year-old schoolgirls from Brighton in 1986. He then, three years later, snatched a seven-year-old girl off the street, bundled her into the boot of his car before sexually assaulting her and leaving her for dead. Miraculously the girl survived and provided vital evidence to the police which led to the successful conviction of Bishop. Incredibly, on the verge of parole, nine years later, vital DNA evidence was discovered by scientists which led to two life sentence verdicts being delivered by a judge at Lewes Crown Court. I struggle to sleep on Thursday evening, tossing and turning, thinking about those poor young girls and their grieving families.

There's incoming news from the Canary Island of Fuerteventura where blog legend, Trumpy Bolton, and his lovely wife Jayne, are holed-up in an all-inclusive hotel for seven days. It is a tradition in those parts to have a glass of cava with your breakfast. What is unusual, is for a guest to pour a whole bottle on top of their corn flakes. 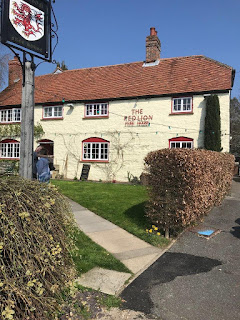 Ms Moon is riding shotgun and fuelled up with Costa coffee as we head out to Oxfordshire for the weekend. Despite being well travelled, neither of us have been on the sauce in Oxford - I did go on a stag night in Headington and also went to Oxford United's Manor Ground with Trumpy and Coops back in the day, where a Leicester City away following pitch invasion nearly saw the FA Cup tie abandoned.

There's no Danny Baker Show or Colin Murray's Fighting Talk on the car radio, as the 'Princess' won't tolerate that until her caffeine levels have risen - I suffer in silence to the Graham Norton Show on Radio 2. He does play a couple of toe-tappers from Joe Tex and Johnny Cash that ease the pain slightly. 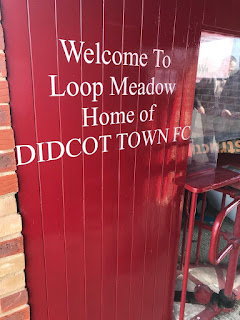 The M1 and M40 are clear of traffic. We've arranged to meet a mutual friend called Chris Hepburn at a pub called the Red Lion in the quaint village of Chalgrove. Ms Moon used to work with him at Asda over 30 years ago when they were teenagers. I used to open the bowling for Keyworth Cricket Club with Chris's younger brother, Tim, around the same time - Tim is now living in the Cayman Islands. Ms Moon is mesmerised and caught in the moment as Chris describes seeing Duran Duran live in concert in the Cayman's a few months ago, as they are both big fans of the New Romantic band. I pipe up that I saw them at Rock City for £2.50 in 1981 - Heppers nearly chokes on his ale

'Heppers' is studying form in the Racing Post as he takes a swallow of a pint of Butcombe bitter in a sun-soaked beer garden. Ms Moon and I order up some drinks and sandwiches, as we catch up on the gossip. I know chuff all about horseracing, as previously mentioned in these journals, but have followed a professional gambler during the Cheltenham Festival, which made me a serious wad of cash, despite only placing small bets. I tip Heppers the wink on Auxerre who is running in the William Hill Lincoln at Doncaster this afternoon. 'Heppers' has very kindly penned a few tourist attractions (pubs) out on a map, so we can plan our evening. 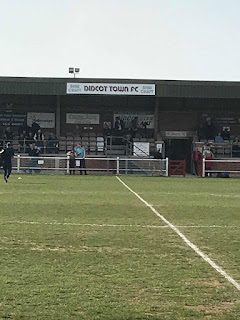 The drive to Didcot's ground is only 25 minutes away. It's another one of those out of town grounds where the club has chosen or have been forced out of the old home; away from their community, where folk can actually walk to and from the ground like you can at Lincoln City's Sincil Bank.

Didcot is a railway town in Oxfordshire with a population of 25,000. It is also well known for its power stations. On February 23rd, 2016, part of the boiler house collapsed at Didcot Power Station, killing four men. In 2017 researchers named Didcot as the most "normal town" in England. Didcot Town were founded in 1907 and play at the Loop Meadow on the outskirts of the town. In 2005 they beat A.F.C. Sudbury in the FA Vase final. 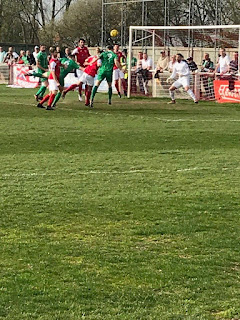 Ms Moon pays us in at £9 a pop and £2 for a programme. The stadium is already filling up with the visiting supporters from Bromsgrove Sporting. Their team were pleasing on the eye down at Welwyn Garden City a few weeks back. They are fighting tooth and nail with Peterborough Sports for the one automatic promotion spot. Bromsgrove forward Jason Cowley scored a wonder goal against Corby Town last week that went viral. I even heard him interviewed on TalkSport's Hawksbee and Jacobs show. He is more than capable of playing higher up the Pyramid; who knows, even the Football League.

I confidently predict an away win to Ms Moon, as we position ourselves level with the penalty area that they will attack. Cowley takes six minutes to get off the mark, leaping unmarked to head a corner that loops over the 'keeper into the roof of the net. I expect an avalanche of attacks; this doesn't materialise due to the rutted and bumpy playing surface, which makes a comfortable first touch impossible. 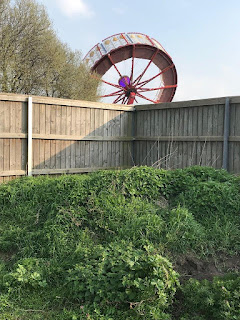 There's a fun fair at the back of the ground that has grabbed my attention. Some god awful ride emerges from the ground and into the sun-kissed blue skies. I pray to God that Ms Moon doesn't ask to go on the helter-skelter at the break. I check the result of the Lincoln at Donny - Auxerre has romped home at 3/1 - that's all the drinks paid for at the Varsity Club later this evening in Oxford.

The Railwayman of Didcot are full speed ahead in the second half and deserve their equalising goal after some sloppy defending by the visitors. Sporting are on the ropes and survive a few scares before the impressive Charlie Dowd fires home the winner following a brilliant advantage played by the young referee.

Man of the Match: Charlie Dowd
Posted by Sticky at 7:47 PM

Just to clarify, DTFC is actually walking distance from pretty much every where in the town and a mainline train station so in a pretty good location. Unfortunately many local football fans would rather stick pins in our eyes than go and support them as they do sod all for the community.
Loving your blog.