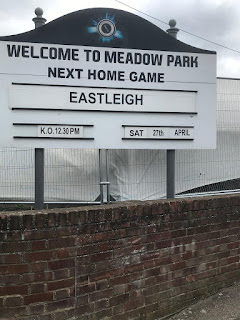 It's Easter Bank Holiday Monday and I'm stood on the 'Spion Kop' (four concrete steps) viewing the D H Lawrence derby between Selston and Eastwood CFC. A win for Selston will see them crowned as champions of the East Midlands Counties League. I say hello to Mr and Mrs John Harris and daughter Lucy. Over 500 folk have rocked up despite it being a long weekend.

The Eastwood 'keeper is wasting time from the first minute; it's not long before the clown is cautioned by the referee. He's a lucky lad to stay on the pitch when he sarcastically claps the ref after conceding a second goal, having been nutmegged for the first one, to put Selston well on their way to the title. 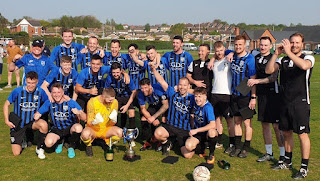 I catch up with north Notts and South Yorkshire groundhopper,  'Dudsey' at the break. We have a good natter as Selston appear to have put the game to bed by taking a 3-1 lead. I keep my beady eye on proceedings at Sincil Bank, where the Mighty Imps need a point to secure the 'Division 4' title, which will see Sky Bet payout Sticky Palms £55 for a £5 each way wager I placed last August - let's not forget that Notts County were 2/1 bookies' favourites back then.

Astonishingly, the Badgers of Eastwood score two late goals in a dramatic finale at the Parish Hall ground. The final whistle is blown, the two teams have played out a 3-3 thriller in breezy conditions. Players, management and supporters anxiously refresh social media on their mobile phones in a desperate attempt to find out how rivals Newark Flowserve are faring at West Bridgford. There are huge cheers, celebrations and tears flowing when news filters through that Flowserve have lost 2-1. I'm delighted for Selston, it's a properly ran club, with some smashing volunteers. The ground has a lovely community feel about it, with a roped-off cricket pitch and pavilion to boot. 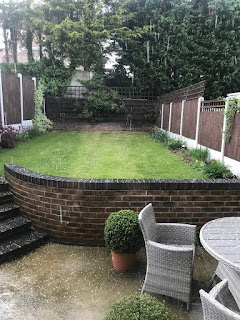 I try something different on Tuesday evening. 'Dafty' and 'Mad Dog' have clocked there's a Notts Sunday Senior League cup final to be held at Basford United's Greenwich Avenue ground between Hucknall Town and RHP Sports (Newark). Basford's ground isn't my cup of tea; it's nothing personal, it's just that I can't abide artificial playing surfaces - nobody seems able to put a tackle in.

The game and standard surpass my expectations. Hucknall's line-up have the baller of the game in Kye Simpson, who scores an absolute banger at the fag end of proceedings, having bulldozed Stan Collymore style halfway down the pitch. I'm unsure who he plays for on Saturdays; I need to ask the 'Bearded Wonder' Malc Storer, my Hucknall correspondent. 'Mad Dog' spends most of the evening in and out of the snack cabin. I've never known a bloke eat so much tucker and yet still maintain a decent weight. 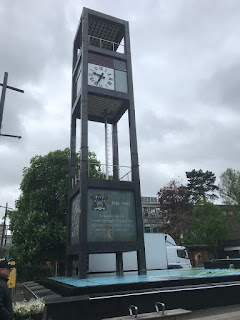 I take a lot of pride in my lawn. It was in a right old 'two an eight' when we first bought the house, but I got it looking mighty fine last summer (no water meter). I spread it with feed, weed and moss killer on Tuesday. The heavens open over the next few days following a Sticky Palms Indian rain dance on the patio.

I meet Ms Moon, Jamie and Lily in the laugh-a-minute Wetherspoons on Carlton Hill. There were one or two half cooked fools who suffered sunburn following a baking hot Easter weekend. I was lathered in all day factor 30 Piz Buin. I call in at The Brickyard for an expensive pint of Snake Charmer craft ale at 6% ABV. I stagger down the hill and up the wooden hill for an early night - tomorrow is going to be soo long. 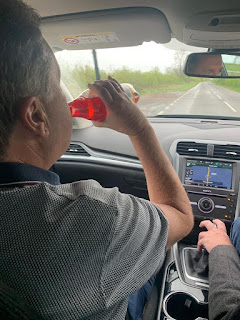 I'm wide awake at the crack of dawn. I shower, shave and have a toasted crumpet, smothered in Anchor butter and a large lump of Stilton cheese (I'm sure you wanted to know that). I fill up the car with fuel before heading over to Keyworth. Two of my best friends are aboard the Fun Bus today - Trumpy Bolton and the Big Man. Ironically they live just a few doors down from one another.

Trumpy comes trooping down the road clutching his litre plastic bottle of Koppaberg cider filled full to the brim. He whines that I'm early and that he's only managed to gulp down one bottle of Ghost Ship. He's not had time for his usual weekend breakfast delicacy of chicken liver pate on toast. It's 7.30 a.m. by the way, folks. I have to stop the car for Bolton, a mile later, outside Keyworth United's ground. "You want the toilet already Trumpy?" asks the Big Man. The legend just wants to take off his new coat from Littlewoods. 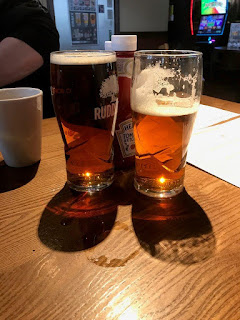 He's soon guzzling the cider and waxing lyrical. The Boltons have just returned from the mother-of-all benders in the market town of Marlborough, in Wiltshire, where he drank the county dry. The Big Man mentions an article in the Press about a beer-mad grandad who claims to have visited 50,000 pubs, supping over 125,000 pints. Trumpy chortles before confessing that he's beaten the chap on both counts.

We're soon parked up in Britain's first-ever designated New Town - Stevenage. There's a bit of a palaver on whether we can rummage enough change up for the two hours 'breakfast' time parking we require. To be honest, the town is a bit of an eyesore. Whoever designed these buildings should be brought to task. 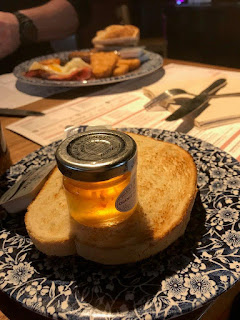 The Standard Bearer 'Spoons ain't too shabby though. Trumpy makes a darting off-the-shoulder Jamie Vardy run to the bar. He shouts up two pints of Ruddles for himself, a pint of Silver Adder for Sticky and a cup of tea for the Big Man. I push a couple of 50p off vouchers into the palm of his hand; his eyes light up.

The Big Man has a fry up, whilst I have a 'West Bridgford Breakfast' - eggs Benedict. There's no Hugo, Tarquin or Darcy dashing around the pub, playing dobby on and cheesing me off, like they do at Cote D'Azur on The Avenue. Trumpy's brekky is pathetic, it consists of two slices of toast and marmalade. He complains that he might only have room to eat one slice. 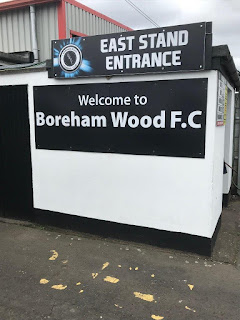 Trumpy has slurped five pints by the time we exit the pub - the Big Man can't even match him with cups of tea. I ask the Legend if he's off to the King Power tomorrow to watch his beloved Foxes versus 'The Arsenal.' "I'm on the beach, Chap", he replies. The litre bottle of Koppaberg has been dispatched down the hatch. A thirsty Bolton is frothing at the mouth and salivating at the thought of a session in the Boreham Wood social club. We park a short stroll away from Meadow Park.

Borehamwood is a commuter town with a population of just over 30,000. It's situated close to Elstree Studios where many films, sitcoms and reality TV shows have been shot. Former Blackburn and Spurs midfielder, Tim Sherwood, was born in the town. The Club were formed in 1948. My team, Lincoln City, nicked their fleet-footed Portuguese winger, Bruno Andrade ( 'The Lincoln Ronaldo'), last summer for a song. His return on investment for 'The Lincoln' has been nothing short of astonishing. 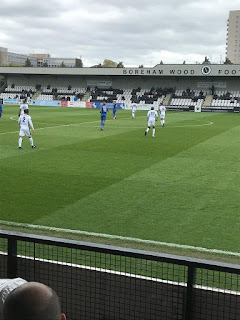 A charming, and very helpful steward, on the bar door, says we can pay £20 to sit in the East Stand. An anxious Bolton needs confirmation that he can slip in and out of the bar throughout the game. Trumpy necks a San Miguel shortly before kick off. We take our seats towards the back row of the stand. To be honest there's bugger all doing in the first half an hour. 0-0 is looming on the horizon; these pair of Herberts will make my life hell on the 100-mile return journey home if that's the end result.

Eastleigh, with nothing to play for (already in the play-offs) take the lead with a flowing move and smart finish. A thirsty Bolton returns to bar and misses the leveller from Ralston Gabriel. There are a few concerns in the social club that the San Miguel barrel may need changing as Trumpy ups the gears and his game. 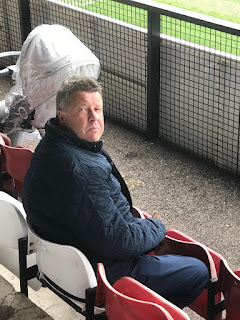 Eastleigh breeze into a 3-1 early second-half lead. Trumpy, oblivious and unaware of the scoreline takes a seat a few rows in front of us, whilst gnawing his way through a Twix bar. He sees impressive 'Wood' sub, Bradley Ash, reduce the deficit, before remonstrating with a few cheeky blighters (under 8s) who he has overheard saying that the Gunners of Arsenal will tonk Leicester City in Sunday's lunchtime kick-off. A finger-wagging Trumpy staggers back to the bar to supervise the changing of the said San Miguel barrel. He misses the goal of the game, a stunning 25-yard strike from Keiran Murtagh.

'Hopper' and the Big Man don't do 0-0s and we can't 'arf pick em. We make a sharp exit, calling by the Tap and Run, a pub and kitchen in the picturesque village of Upper Broughton, on the Notts/Leics border. It's owned by the cricketers Stuart Broad and Harry Gurney, and is close to the village of Ad Kettleby, where Desert Orchid used to spend his summer holidays.

Men of the Match: Trumpy Bolton and the Big Man - fantastic company xx
Posted by Sticky at 7:53 PM