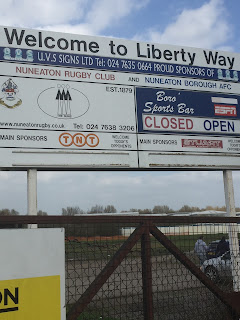 We head back down 'Wembley Way' towards the tube station. I've watched football for over 45 years and yet today is up there with any of the thousands and thousands of games I've watched. A few years ago my club (Lincoln City) were dead, buried and staring the Conference North in the face. The turnaround has been nothing short of miraculous. The unknown players the Cowleys have recruited have performed to a man, on the world's biggest stage, in front of 30,000 of our fans. The city won't sleep tonight.

It's time to celebrate with the 'professional drinkers' at the Free Man on Carlton Hill - most are half cut and incapable of a conversation. I have a pint of Shipyard before heading home and tucking into some Pickering's -  a gin distilled in Edinburgh for over 150 years and only opened on special occasions (on a Sunday).

It's Tuesday evening; yesterday (Monday) was a blur, I need my football fix. As the incessant rain bounces off the French windows, more and more games fall by the wayside. Radford FC's Selhurst Street surface has the best drainage on the circuit. There's a thumbs up from their Twitter account to confirm the game is ON. Hardy volunteers have forked the pitch for most of the day. 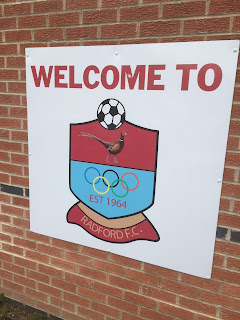 It's the usual routine of sticking the car in Asda on Radford Road and hoping their scouts and trolley-pushers don't spot I've gone over the two-hour parking restriction. I'm in somewhat of a quandary this evening as Gedling Miners' Welfare are the visitors; a club I have a soft spot for. I stand in between the two dugouts. Big Glenn is remarkably calm. There are no tantrums, swear words or removal of baseball cap in a fit of pique, as the Pheasants sweep aside the Miners by 3-0.

Thursday evening is spent in the old mining village of Selston, just off Junction 27 on the M1. 'The Taxman' is riding shotgun. He moans and groans about Nottingham Forest's inability to find the back of the Onion Bag - they haven't scored in the last six games. Rumour is, that only the visiting Barnsley fans are allowed to buy golden goal tickets for Saturday's fixture.

It's a wonderful game of football at the Parish Hall. Teversal see off Selston 3-2. Dave Cockerill scores a goal of rare beauty for this level - his performance alone is worth the admission fee. He's carrying some timber these days, but his touch, decision-making and goal-scoring prowess are first-class. 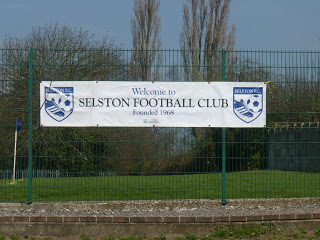 Plans for a Friday tea-time drinky poo with Ms Moon are scuppered when her mum takes an unfortunate tumble (I've never known a good one), resulting in her being whisked off to an overstretched accident and emergency department at Nottingham's Queen's Medical Centre. I peg it down to the Willowbrook in Gedling and have a couple of real ales with Arthur Daley, Terry McCann and Dave off Minder.

I'm up at eight bells on Saturday morning, I've a date with the Big Man (the artist previously known as White Van Man) at Colwick Country Park, next to Nottingham Racecourse. We're both proper into our cycling at the minute (no drug tests required). The other evening we had a lovely ride down to Beeston Weir from ROKO gym in Wilford, where we saw all the beautiful tributes in the memory of 12-year-old Owen Jenkins who tragically drowned at this spot whilst heroically saving another life in July 2017. 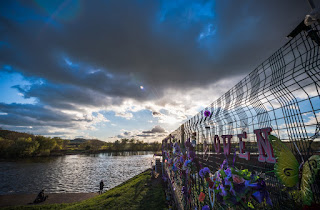 Blimey Charlie, ninety minutes of pedalling on paths caked in mud and puddles has done for me. I'm a broken man as I shower up, dress and prepare a chilli, whilst listening to the brilliant Mark Chapman broadcasting live from Aintree. I've only won the Grand National twice, ever. Fifty pence each way (old joke) on Mr Frisk in 1990 and Bobby Joe in 1999 saw me sharing Cuban cigars with Robert Maxwell on his yacht in the Canary Islands.

I arrive at the Rancliffe Arms in the village of Bunny at 1:20pm. It's a gastropub that was run back in the day by Brian Clough's chief scout, Alan Hill - and what a lovely chap he is too. I hear the sound of burning rubber and a late press on the brake pedal, as the Big Man does a 90-degree turn on entering the car park.

We're joined by Tim Wilkes, a former Notts County striker and Non-League legend - the Big Man always teases him that it was Big Sam Allardyce who released him from Meadow Lane. Tim did the business and banged the goals in for a number of high profile clubs on the circuit including: Kettering, Hinckley and Grantham. 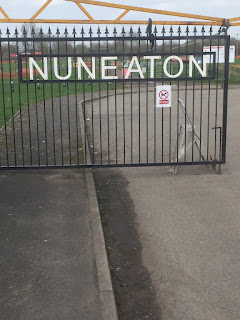 Christ on a bike, I've forgotten how frightening the Big Man is behind the wheel, as he weaves in and out of traffic, ironically close to Prestwold Hall Racing Circuit. We're on two wheels as we come off the M1 and join the M69. I've run out of fingernails as we exit the motorway.

Six years ago he took 'The Taxman' on a death ride to Hednesford Town down the A38 in rush hour traffic - the poor bloke hasn't stepped in his car since, and is still receiving counselling to this day. If you're a bank robber, cashpoint demolisher or armed raider and need a getaway driver, book now to avoid further disappointment.

I notice a piece of paper tucked in behind his sun visor. I ask for a look. It's confirmation of a tour of 'Emmerdale Farm' - I actually shed a tear in sympathy. He starts chortling and admits he's not missed an episode in 15 years.

It's an astonishing £14 to stand on the terraces at Liberty Way - a club charging that at this level must have delusions of grandeur - it's a further £2 to transfer into the 'stand' ... lol.  A raffle ticket seller is immediately in my face and not particularly polite. I wave her away - I always buy a raffle ticket. 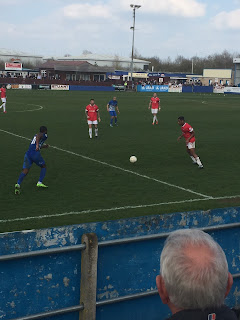 For £14 you'd expect to chance upon a team-sheet so we can at least see who's playing. I ask a steward where I can find one, "you'll be lucky son" is his reply. Most clubs at this level have the courtesy to type one out and give them out for free and not charge £14 on the gate - I would happily pay 50 pence for one. I came here a few years back (2013) on a bitterly cold day and was very impressed with the DJ. He or she are proper on it today. I'm nearly tripping out as 'Chime' by Orbital blasts out the PA system.

Nuneaton is a town with a population just shy of 80,000 in the county of Warwickshire. Due largely to munitions factories, the town suffered from heavy bombing by the German Luftwaffe in the Second World War. On the 17th May 1941 100 people were killed, 380 houses destroyed and over 10,000 properties damaged. 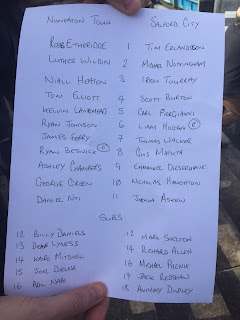 It's nip and tuck at the top of the National League North as Salford and Harrogate scrap it out in the title chase, with the former three points in front. Nuneaton are on a good run with former Nottingham Forest manager Gary Charles at the helm.

Salford are on top in the early stages. Their talisman, the fleet-footed Nick Haughton, signed from Fleetwood Town, puts them one to the good with a beautifully executed free-kick. Carl Piergianni inflicts further damage with a close-range header from another set piece.

George Green is in centre mid for Nuneaton and has previously played for Salford. As a youth player he was signed by Everton for £300,000 from Bradford City. He left Goodison Park four years later, struggling to cope with too much too young. He has openly admitted to suffering from depression. Green clatters into 'crowd favourite' Scott Burton (a player I rate and admire) and is correctly yellow-carded. The chants from some of the away support are sick, vile and aimed at Green. It's pathetic.

I can hear the Big Man's tummy rumbling at the break. I ask him if he wants a pie. The queue at the 'Pie Stall' is enormous. Rumours are circulating that there's been a 'cock-up on the catering front' and they've run out of pies (it would never happen in Wigan). I shoot over to another catering outlet on the far side of the ground and relay the devastating news to the 'Big Man.' He takes it in his stride, "Hot Dog with Tommy Ketch, please son.'

Nuneaton try to break down a resilient Salford but can't blow the house down and lack the killer instinct, with the visitor's Liam Hogan outstanding in the heart of their defence. The Nuneaton centre half's have been smoking Robert Maxwell's Havana's whilst marking Salford's 9 jacket. I've put more effort in hunting down a steak pie.

Man of the Match: 'The Big Man and Liam Hogan (a proper defender).