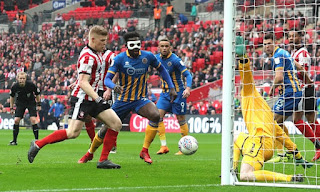 It's Saturday 20th January 1973. An eight-year-old Sticky Palms is sat on a wooden bench, behind the goal in the South Park Stand at Lincoln City's Sincil Bank stadium, scoffing his way through a bag of Woolworths pick 'n mix that his Nana has bought him.  My Dad, Frank Palmer, a journalist on the Daily Mirror, has sloped off to the Press Box to catch up with his old friend and former colleague Maurice Burton, a sports correspondent for the Lincolnshire Echo.

There's quite a commotion in the crowd. I lift my head from out of my bag of sweeties to see what's going off. 23-year-old Irishman, Brendan Bradley, a £6,000 signing from Finn Harps, is wheeling away in celebration after firing a goal into Crewe Alexandra's net. I'm transfixed and captivated for the rest of the game and fall in love with the club at first sight. Little did I know that I would watch them play at over 40 different grounds.

I shared with Dad and my brother the glory years of Graham Taylor and his record-breaking Division Four team. The renaissance during the Colin Murphy era, in his two successful spells and the exciting times with John Beck and Keith Alexander at the helm in the nineties and noughties. There was the heartbreak of the 'Bradford Fire Disaster' in 1985, in which 56 supporters perished when the Valley Parade main stand caught ablaze - two were Imps fans, who the Club named a stand after. The disappointment of a 1-1 draw at Fulham's Craven Cottage, denying us promotion to what is now the Championship in 1982 and the devastation (twice) of relegation to the fifth tier (Conference).

My father passed away in 2000. He missed the two trips in the play-offs to the Millennium Stadium, in Cardiff, where we came up short (it was a miracle Keith got us there on his budget). My own family became a priority in the nineties and noughties. Sticky junior attended his first game in 1999, a 3-2 defeat to Leyton Orient - he joined in with the crowd shouting 'Foster out' (George Foster was a decent man and Phil Stant's assistant). The next time he returned to Sincil was for an FA Cup tie in 2007, sporting Nottingham Forest colours in the away end - 'rules' are that you support the team from the town where you were born (we live in Nottingham).

Non-League football became my scene and obsession. Lincoln, true to form, duly obliged with a second stint in the Conference, following the disastrous appointment of the inexperienced, arrogant and aloof Chris Sutton. I would go just twice a season, but it wasn't the same without Dad.

There was a turning point for the club in June 2016. I pray it was a vision and not the cheaper option. What we do know is that two brothers from Essex rode into town with a strong Non-League CV on the back of success at Concord Rangers and Braintree Town, with university degrees and a firm belief in sports science - City were about to buck the trend of appointing run-of-the-mill managers. 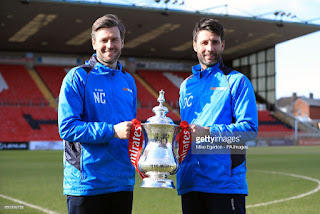 Ms Moon kindly bought me a last-minute ticket for the third round FA Cup tie at Ipswich Town - I needed to tick off Portman Road in my quest to complete the 92 League grounds. I went with no expectation. What I saw that day defied belief and blew me away. The Imps played them off the park, but couldn't kill them off. There was a heart, soul and spirit not witnessed since Big Keith's land of the giants. It was a lonely, sad, but proud drive back home, despite the 2-2 draw. The Tractor Boys lost the replay in dramatic fashion; a game shared with a live TV audience.

Last year's FA Cup journey has been well-documented; I shan't force feed you again. We were privileged and honoured to witness victories against Brighton and Burnley - despite sitting in the 'wrong end' on both occasions, due to our desperation to 'be there.'

An early first-round exit at AFC Wimbledon meant there was to be no repeat performance. There was a chink of light appearing in the controversial EFL Trophy, a competition some supporters chose to boycott. Despite a tough regional draw and tricky ties to follow at Rochdale's Spotland and Peterborough at Sincil Bank, 'The Lincoln' found themselves 90 minutes away from their first appearance at Wembley since their formation in 1884. 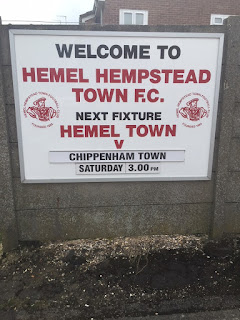 Where was I when 'one of our own' (Lee Frecklington) dispatched the winning penalty to send us to 'the home of football?' Pacing up and down my balcony in the Hotel Bahia Princess in Costa Adeje, Tenerife, waiting for confirmation from the Imps' official Twitter account.

It's Saturday morning and I'm piloting down the M1 south. We're dipping our toes into the Vanarama South for the first time this season. Mud's 1973 hit 'Crazy' is on Paul Gambacinni's 'Pick of the Pops' as we roll into a car parking space on Vauxhall Road, outside Hemel Hempstead's ground.

It's £12 a pop on the turnstile. I like the ground, it has a homely feel about it. We stand across the far side, facing a cool breeze. Hemel blow away the visitors, Chippenham Town, from Wiltshire. Their front two, David Moyo and Karl Oliyide are too hot to handle as they race into a 3-0 lead. It's a lovely club, where we meet genuine, friendly supporters who wish us well for our day out tomorrow in north London. We spend a wonderful evening in the historic market town of St Albans. I tick off a few old Victorian back-street boozers, before enjoying a few scoops with Ms Moon in the city centre close to the cathedral. 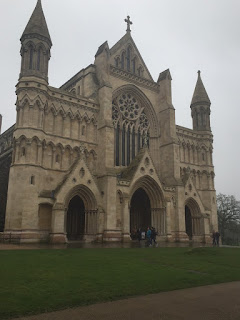 It's Sunday morning and we're sat in a hipster street cafe just around the corner from the hotel. The nerves are kicking in; it's just five hours before kick-off. I eat as much breakfast as I can, but it's a struggle to force it down. I notice a tweet from Nicky Cowley's wife, which says ten years ago she bought, as a present for her then boyfriend, Nicky, a stadium tour of Wembley.

'Cooperman' has tipped us the wink that Kingsbury, in north London, is a top place to park for Wembley. We tip up there just after midday and find a parking space just off the busy high street. We would've nipped into JJ Moons 'Spoons, but a sign says 'Shrewsbury supporters only' - I'm a stickler for the rules.

It's a five-minute train ride to Wembley Park. The place is buzzing with football supporters already. 'The Lincoln' outnumber the Salopians by two and a half to one. I'm taken aback at the redevelopment on 'Wembley Way.' My last visit was in September 1997. It was two days' after the tragic death of Princess Diana. The atmosphere was sombre and surreal. Earlier in the day we had dropped into Lord's to watch Notts CCC in a County Championship match versus Middlesex. It was one of the few times I've been sozzled at a football game. 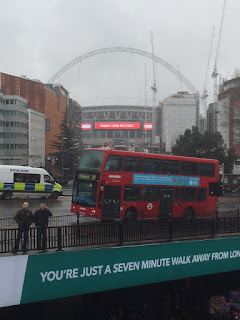 I won't have a drop of beer before this one; that's for sure. It's teeming down with rain as we loiter inside the Novotel Hotel foyer waiting for my brother, niece and her grandad. They've travelled down from York at the crack of dawn and have been to the Science Museum, before getting caught up in 'The Arsenal' traffic on the tube.

I'm getting tetchy and irritable and want to be sat in the ground 'enjoying' the pre-match entertainment. I distribute the tickets out and peg it up 'Wembley Way' with Ms Moon. An escalator transports us up into the gods. We're sat bang on the halfway line with a bird's eye view of the stadium.

Ms Moon, gawd bless her, tries to exchange some small talk. It falls on deaf ears, like it did at Turf Moor last season and on Colne High Street, in Lancashire last May, when waiting for the final score to come in from the Macclesfield game that clinched us promotion back to the Football League. I'm a bag of nerves. 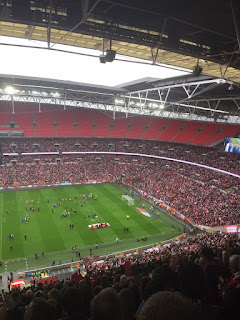 There are some lovely touches by both clubs. The Shrews and Imps stadium announcers read out the teams over the PA system. Lincoln's special guest is 16-year-old Jack Nottingham, who has inoperable bone cancer. Young Jack walks out with the match ball as I struggle to fight back the tears. Danny Cowley has stepped aside and allowed legendary manager Colin Murphy (I named my budgie after him) to lead the team out - what a wonderful gesture this is. I well up again as triple amputee, 13-year-old Harvey Phillips is today's mascot.

The game kicks off and I feel an inner calm. Shrewsbury look comfortable on the ball, but have the Imps snapping at their heels. The Cowleys, in their working gear, are prowling the technical area and are their usual animated selves. Shrews' manager Paul Hurst, a man who Danny Cowley openly admits to ringing for advice during his Non-League days, is suited, booted and stood still.

The Imps survive an early scare when Bryn Morris sees a speculative shot thump off the crossbar. Shrews' 'keeper Dean Henderson looks to be 'cleaning windows' as he comes out to collect a ball, before falling dramatically to the floor, where he remains motionless. A stretcher is called for. TV replays show it to be a poor challenge by Matt Rhead, who is fortuitously shown a yellow card. 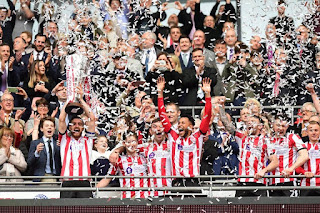 Minutes later, with Henderson clearly ruffled and still dazed, a Waterfall shot is fumbled into the path of Elliott Whitehouse, who blasts a shot into the roof of the net. I'm out of my seat in a flash, clenching my first, the relief pouring out. Lincoln enjoy a good spell of pressure, although they are thankful to on-loan 'keeper Ryan Allsop who makes a stunning save from a point-blank header by Omar Beccles. The first half is over in a flash. I head downstairs for the toilet, but quickly do an about turn when seeing the beer-fuelled queues.

The second half lasts an eternity as Lincoln look to run down the clock at every opportunity (we're brilliant at that). Rhead is hooked just after the hour after spooning a great chance over the bar. Another juggernaut, the ever-willing Palmer, replaces him. He runs his socks off and holds the ball up in corners, buying the Imps some valuable time and rest.

Legs are tiring, the energy-sapping, rain-soaked Wembley turf is taking its toll on both sets of players. Lincoln are magnificent in the final quarter. Whitehouse is having the game of his life. The referee blows the final whistle. I turn to my brother and hug him tightly, not wanting to let go, ever. I look to the skies and thank my Dad for letting me mither him into taking me to Sincil Bank for the first time in 1973.

Men of the Match:  Jack Nottingham and Harvey Phillips our special guest and mascot and the Shrewsbury mascot (I'm sorry, I couldn't find his name)
Posted by Sticky at 6:15 PM