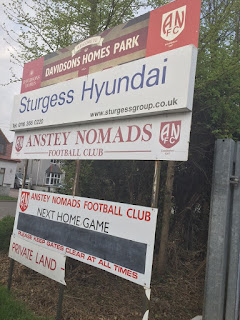 I arrive home from Nuneaton relatively unscathed, minus fingernails, after 50 miles of a Grand Theft Auto death ride journey by the Big Man. After a couple of scoops at the Free Man on Carlton Hill and Old Volunteer, on Burton Road, I finally head home. Jesus wept, Britain's Got Talent is on the gogglebox. I fire up the computer and scan the full-time results in the East Midlands Counties League. The Boatmen of Dunkirk have won at the death, beating title rivals Teversal, thanks to an Adam Burton 93rd minute winner. I do a hands-on-hips little jig of celebration en route to the kitchen where I pour myself a stiff measure of Pickering's Original Gin.

It's a beautiful evening for cycling on Monday. The Big Man and I pedal down a sun-kissed Trent Embankment, past Holme Road (Nottingham Forest's old training ground) and down to the rowing course at Holme Pierrepont. 20km in the bank will help me reach my fighting weight for a six-day drinking binge in Lisbon in June during the World Cup. 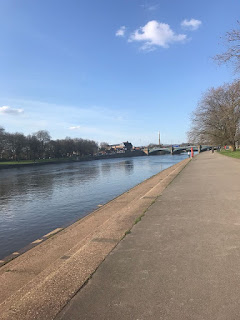 I miss Lincoln City's vital promotion-chasing clash with rivals Wycombe Wanderers (managed by Imps' legend Gareth Ainsworth) at Sincil Bank due to working American hours - Sticky doesn't do 0-0s. Wednesday evening is spent in the old coal-mining village of Cotgrave, where Southwell City are the visitors at a sun-soaked Welfare ground.

I travel up to Ilkeston Towns New Manor Ground on Thursday, due to a venue switch, for Kimberley MW v Radford FC. The Pheasants are in a rich vein of form and dish out a 4-0 drubbing. All is quiet on the 'Kimbo' bench with rumours circulating that their potty-mouthed manager has spat out his dummy and left the club. Big Glenn Russell has a smile as wide as the A610. They'll be a good each-way bet for a Champions League spot next season.

It's Saturday morning and poor old Sticky is working his ass off in the front garden. I've dug deeper than the British Army in The Great Escape. Percy Thrower would be appalled to hear that I nearly put my spade through an electric cable, which would have resulted in a high voltage Sid Vicious mohawk hairstyle. 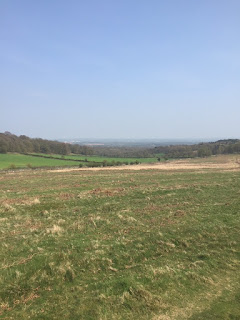 I'm getting all excited for the big game now, as I shower up and shave. Ms Moon has made a mini picnic as we venture out to north-west Leicestershire. We clock the Altrincham FC coach on the A453 in Clifton. A win today at Grantham will see them clinch the Northern Premier League title.

Bradgate Park is in Charnwood Forest and covers over 850 acres of land. We park up at Hunts Hill and have a pleasant stroll. A herd of deer emerge from the undergrowth and canter up the hill. We sit on a bench admiring the sweeping views of the countryside, whilst enjoying a spot of lunch. 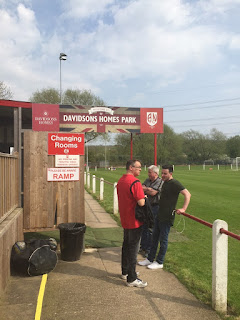 Anstey is a four-mile drive away. It's £5 on the gate. It's a cracking little ground which has recently had a major make-over. We chill on the raised decking, chatting to some of the players' parents, basking in the spring sunshine.

Anstey is a village north west of Leicester, with a population of 6000 people. It is known as the Gateway to Charnwood Forest. Whilst developing a site for the new Co-op store in 2002, remains were found, which according to archaeologists dated back to the 12th Century. Ned Ludd, from whom the industrial revolutionists The Luddites took their name from, was born in the village. In 1779 in a ‘fit of passion’ he smashed up two knitting frames. Snooker player Willie Thorne is from the area, and it is said that he learnt his trade at the Anstey Conservative Club. 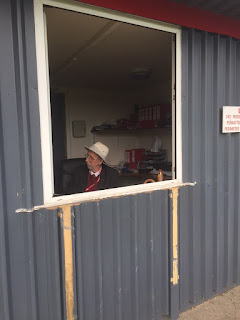 I'm presuming 'Upo' hasn't rocked up yet; you tend to hear him before you see him. Radio Nottingham were asking for folk to call in who left the game early at The City Ground last weekend, missing two late Tricky Tree goals. I'd already seen him cough up on Twitter about a sharp exit. Upo on a radio phone-in rant would be comedy gold, with the bleep machine on overtime.

Dunkirk have a DNA and ethos that's instilled into their players at a young age. You are taught to appeal for everything, have a never-say-die attitude and play with aggression. Some folk just don't get it; Anstey being one of them. 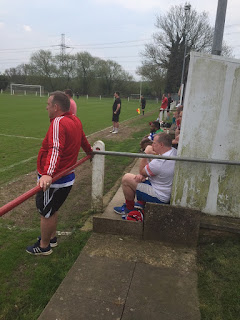 I saw these two teams play out a humdinger down Lenton Lane a few weeks ago. The Anstey 'assistant manager' (some hipster with a beard) was bleating like a baby lamb at the referee about giving the Boatmen everything. "It's because they ask mate, so quit your moaning, I haven't paid £5 to hear you bellyaching all night." His eloquent reply had a few effs and jeffs and was delivered with venom.

I have forewarned Ms Moon that Dunkirk are world class at swearing, we've run through a few expletives so that she'll fully understand the lingo and matchday experience. It's tight at the top of the table with four clubs still in the running for the championship title. 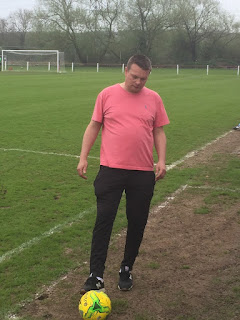 You can feel the tension in the air as the players emerge from the tunnel. We're stood directly to the left of the away dugout, leaning on a red-painted rail. Dave Robinson and Craig Clark have done a cracking job at the helm for Dunkirk. They have a belief in youth and nurture it; unlike their predecessor. They have brought in the vastly experienced Jimmy Albans onto the coaching staff.

Jimmy has a voice like a foghorn and would piss an interview for a town crier in any parish of our county, but he does know his onions. He immediately susses out the pathetic time-wasting antics of the Nomads and is onto the referee in a flash. "You'll soon get tired of that," says someone from the Anstey bench. "I bet you I don't" he replies. 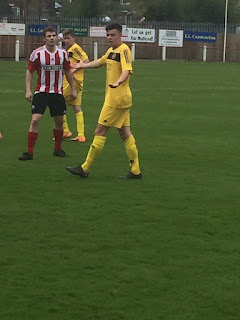 The first half is nip and tuck. Anstey take an age in everything they do. The referee, 'the timekeeper' as I like to call him, seems reluctant to hurry them along or even stop his watch. Albans complains about the speed of balls being retrieved and thrown back in. The ref's reply is "I'm not a ball boy.

I wanted a bet on young Ollie Clark getting a yellow card; he's had more bookings than Joey Barton. He clatters into an Anstey player on seven minutes and is duly booked and royally bollocked by his Dad. It seems to calm him down as his presence is felt on the game with his lung-bursting runs and precise, crisp passing. I saw him play his heart out at Holwell Sports a few weeks ago. An early booking will calm him down. 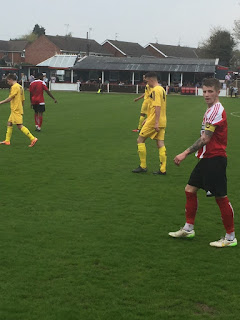 Young Timmy Berridge is up top, a lad I know well from Gotham FC and Clifton All-Whites. He will learn a lot from playing alongside Steve Chaplin. 'Chappo' is head and shoulders above anyone on the pitch (top ratter Ben Moore deserves a special mention too). He leads the Anstey defence a merry dance, with his deft touch, aerial dominance, hassling and hounding and intelligent play.

Jack Lane is Anstey's standout player. Ms Moon says he looks like 'Tinhead' off Brookside. He covers the ground like a gazelle and has a wicked shot and dead ball in his locker. Will Rawden, Dunkirk's left back, will need to be on his toes. Dunkirk come the closest to scoring in a frantic first half with a Berridge header bouncing off the bar, following a brilliant save by the Nomads' 'keeper.

Ms Moon isn't too chuffed with me as I've been chatting to a Leicester groundhopper in the first half. I knew he was a hopper as he'd got a Machine Mart carrier bag which was probably packed out with a flask, Tupperware box full of egg and cress sandwiches, a programme cover and an old tobacco tin to put his newly-purchased club badge in. 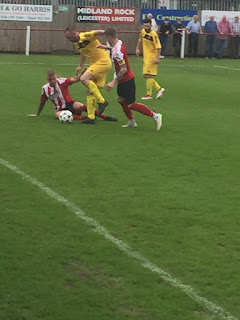 There's a commotion at the break. Ms Moon says I've an eight-inch grey hair protruding from out of my nose. My eyes begin to water when she asks whether she can pull it out. After twenty aborted attempts, I finally feel a tear fall down my face with the offending item trapped between my thumb and first finger.

Out of nowhere we hear a DJ on the PA system, and let me tell you folks the guy is on fire. He plays a superb set including: 'Cuba' by the Gibson Brothers. 'Green Onions' by Booker T & the M.G.'s and 'One Nation Under a Groove' (best start to a song ever) by Funkadelic.

I'm hoping Jimmy Albans has had a cold shower and calmed down as he's proper bollocked the referee uphill and down dale on his way to the dressing room at half-time. 'The bearded hipster' is poking his nose in The chilled-out referee will have been told in no uncertain terms to keep his beady eye on the farcical time-wasting antics from all at Anstey. 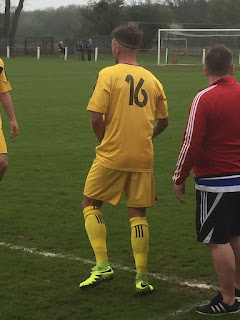 My man 'Chappo' is scythed down in the area with 20 minutes to go. Berridge steps up, only to see his penalty brilliantly beaten away by the Nomads' 'keeper. It's a pressure cooker atmosphere now, a situation the Boatmen will thrive on.

'Robbo' repeats "it'll come lads, be patient." His words ring true, minutes later. Berridge shows balls of steel, as he skips past two defenders on a diagonal run, before unleashing a shot into the bottom corner of the onion bag. The Dunkirk bench leap into the air in celebration. I raise a clenched fist and peck Ms Moon on the cheek.

The tables are turned on Anstey as Dunkirk run the clock down. Balls appear on all four sides of the pitch. Suddenly they have a bigger stock of footballs than JJB Sports. Berridge rolls the ball into an empty net to put the game to bed. The scenes are magical and heart-warming.

A late Anstey goal doesn't put a dampener on the day. We walk past four old guys. One pipes up, "Dunkirk just about deserved that." I put my hand on his shoulder and say "fully deserved mate, fully deserved."

Man of the Match: Steve Chaplin
Posted by Sticky at 7:32 PM