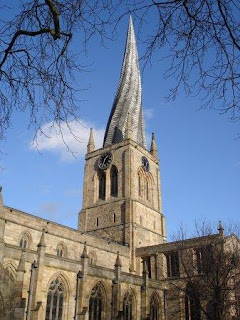 I am on the A60 approaching Newstead Abbey, the ancestral home of Nottinghamshire poet Lord Byron. I'm stressed out to the hilt as the clock ticks towards my company's financial year-end and the pressures associated with it in the world of sales. I need to chill out and relax for the evening. Christ almighty, I can't even do that, as Danny Cowley's Lincoln City roll into Mansfield Town's Field Mill.

'The Lincoln' are stuck in a rut. I saw them get battered with a beer-fuelled Trumpy Bolton at Crawley Town, in Sussex, a few weeks back - I've not listened to Robert Smith's The Cure since. The following week that vile, horrible club, Crewe Alexandra, whacked us 4-1 at Sincil Bank - we miss our talisman Sean Raggett who set sail down The Wash to Norwich City in January.

I park up at the Water Meadows Leisure Centre. The place is mobbed with Imps fans - an incredible 2,000 following have rocked up on a school night. I've got an hour to kill before kick-off. I'm not sure if my stomach is wrenching and churning because of hunger or nerves. I grab my first Big Mac of the season at one of those soulless god-forsaken retail parks that have killed off our town centres. 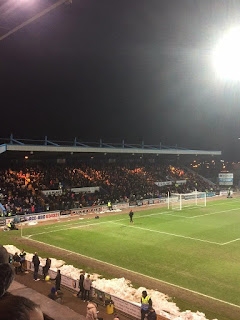 I couldn't get in the Lincoln end; we've only gone and sold out again. I've a bird's eye view of proceedings on the second row of the upper tier in the Ian Greaves Stand. A lad that used to play for my local cricket club worked for Ian Greaves. I saw them both lift the Freight Rover Trophy at Wembley in 1987, along with 60,000 other supporters, when he saved a penalty to bring home the bacon. His name was Kevin Hitchcock and he didn't do too badly for himself after, either.

At least we haven't got to put up with that bungling fool Steve Evans and his thug of a sidekick this evening, as they've both upped sticks to London Road in Peterborough. Ex-Imp David Flitcroft (two games on loan in 1993) is at the helm along with 'Big Ben Futcher.'

The Red Imps are fed, watered and rested after a gruelling fixture pile-up in January and February. Tonight there can be no excuses. The first half sees a committed display from both teams, with no quarter given. Lincoln take their eye off the ball early in the second half and fall behind to a clever finish by Joel Byrom. 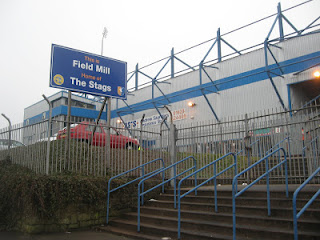 'The Lincoln' have worked their socks off as the game enters the dying embers. Former Stag and Lincoln sub, Ollie Palmer, has received some ferocious stick from the Stags singing section. The inevitable happens on 90 minutes. Matt Rhead is like a performing seal at Twycross Zoo, heading the ball upwards twice unchallenged in the box, before it falls to Palmer who sweeps a shot home despite Conrad Logan's best efforts.

Palmer heads straight to a silent and stunned Stags singing section, cupping both his ears in their direction. I'm sat on my hands with a smile as wide as the A60. A moron in the stand hurls a water bottle towards Palmer. Lincoln skipper Luke Waterfall, even more foolishly, launches it back up to the top tier. The referee correctly shows him a Red card.

I find a turn of pace at the final whistle as there's a chance it might kick off. Some blokes behind me have expressed an interest in fisticuffs. I'm back home with the kettle on before 10:30pm. I toss and turn for most of the night re-living the extraordinary ending to a fine game of football. Lincoln City are back on it, with our No.30 Alex Woodyard ("he never gives the ball away") outstanding once again. He was released by Phil Brown at Southend in 2013 and is now attracting much-deserved attention higher up the food chain. 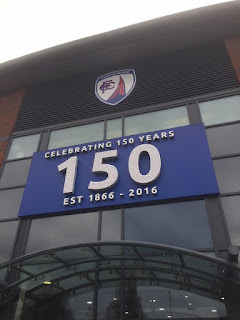 I'm kissing the lounge floor on 90 minutes on Wednesday evening, as if the Pope has graced its presence, as Tottenham Hotspur bow out of the Champions League. A nice little correct score bet will pay for a few weekend scoops. Glenn Hoddle and Jermaine Jenas have blown smoke up Spurs backside for most of the match. Juventus are ruthless in the final third and are denied a stonewall penalty early in the game.

Friday evening is spent at a damp and dank Platt Lane as Keyworth United entertain Aslockton and Orston in a 'Floody Friday' Central Midlands League game. My brolly is broke and I'm soaked to the skin as KUFC run out easy winners. A bizarre event happens at half-time as an away supporter falls down a manhole as the cover gives way due to slippery conditions. The poor sod is battered and bruised - I hold his umbrella; at least it keeps me dry for five minutes.

I sit in my pants and T-shirt, on my return home, smelling like a wet old dog as England win the final One Day game in New Zealand to clinch the series. Moeen Ali and Adil Rashid bowl beautifully in tandem as they rip through the top order. 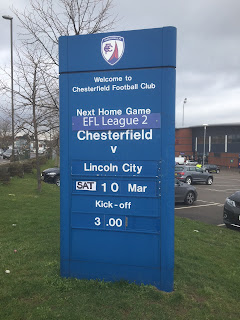 I'm getting pumped up for the Chesterfield game on Saturday morning with one eye on the rain-drenched garden. I play 'Gravel Pit' by Wu-Tang Clan and 'Dare' by Gorillaz on my YouTube playlist. Murphy the budgie used to sit on my shoulder and enjoy me throwing a few shapes, bless him.

The club website advises us to park on Old Brick Works Lane, close to Chesters fish 'n chip shop. I clock an Aldi and take advantage of special offer Valpolicella Ripasso at £7.99 per bottle. We eat al fresco outside Tesco extra; a lunch kindly made-up by Ms Moon.

Chesterfield is a market town in Derbyshire with a population of over 100,000. It's best-known landmark is the Church of St Mary and All Saints, with its crooked spire constructed in the 14th Century. Queen's Park, in the town, is an attractive setting for cricket, with a bandstand and small pavilion. Indian cricketing legend Sachin Tendulkar said it was one of his favourite grounds. Ms Moon and I once had a picnic there. 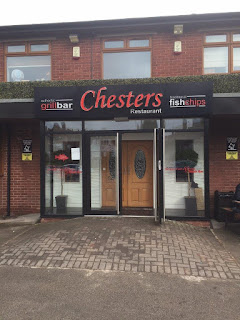 I went to the Spirerites old Saltergate ground in 1979 when the Red Imps won 3-1. It was the only time my mother ever watched Lincoln. Crowd favourite Gordon Hobson (a Sheffield lad) was on flames that day. The modern build Proact Stadium lacks any real character. What idiot agreed to it being built in the middle of a retail park?
. 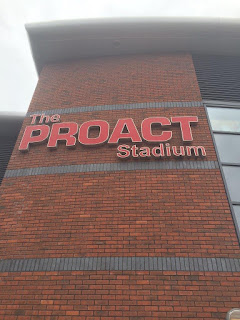 It's £24 to sit in the West Stand, with seats a spitting distance away from both dugouts. The DJ spins a few classics including: 'Getting Away With It' by Electronic and 'Kinky Afro' by the Happy Mondays. I spot suspended Imps' skipper Luke Waterfall at Danny Cowley's side. I was going to offer him a sip of my bottled water, but he might not see the funny side.

The first fifteen minutes is hurly-burly, huff 'n puff and lacks any real quality. Ms Moon points across to the far stand where a sea of stewards race up the gantry. A supporter has been taken ill. We can see clearly a medic performing CPR for what seems ten minutes. I'm shocked to see the game continue as a human shield is formed with blankets. The game is suspended by the referee on 25 minutes. An air ambulance is applauded in and out of the stadium, as are the stewards and St John's Ambulance staff. We pray to God that the supporter pulls through.

The result is immaterial now; I'm surprised to see the game re-started. I guess life goes on. Lincoln are still in the changing rooms as a ball comes sailing in from the left wing. A looping header at the back stick puts Chesterfield 1-0 up. Michael Bostwick nods home an equaliser on the stroke of half time to make honours even. 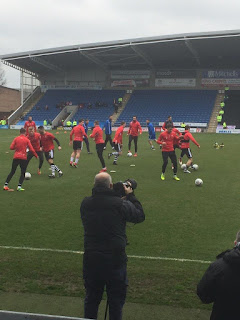 The Cowleys are bending the fourth official's ear, whilst former Nottingham Forest under 23 coach Jack Lester is calm, measured and unmoved. Both teams are desperate to win, for different reasons. The Red Imps 'keeper Ryan Allsop makes an outstanding save with an outstretched hand pushing a goal-bound shot around the post, as Lincoln start the second half sluggishly.

On loan Blackburn defender Scott Wharton, who has been a Colossus, leaps like a salmon to power home a header to send the 2,000 Imps behind the goal into wild celebrations. The Cowleys close the game down. Matt Rhead is withdrawn. He is in the form of his life after penning a new contract. He's won every header and his touch has been sublime.

Super sub Ollie Palmer wriggles through three challenges before an outrageous finish with the outside of his boot to send the Imps back into a play-off spot. It's horrible to see the Spirerites six points adrift of safety. I really hope Jack Lester can steer them to safety.

No man of the match as St John's Ambulance, paramedics, Derbyshire, Leicestershire and Rutland Air Ambulance and Chesterfield FC stewards saved someone's life. Bill Shankly's famous quote about the game being more important than that is something that nobody in this ground will agree with. A donation will be made by this blog. Well done to all xx
Posted by Sticky at 10:57 AM

It’s not built in the middle of a retail park it’s built on the site of an old glassworks in Whittington moor , recently some more shops have been built on former industrial land , in effect the stadium has helped the area economically