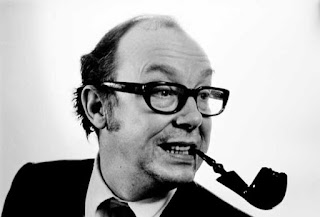 I've enjoyed my away days with 'The Lincoln' over the last few weeks. Danny Cowley has had to change his tactics since being rolled over and outrun at Crawley Town. 4-3-3 has seen us pick up seven points from our last three games.

Ms Moon and I love it Oop North; she doesn't take much arm-twisting when I dangle the carrot of an overnight stay in The Sun Inn and Hotel in the nearby city of Lancaster, following the Imps' visit to the Globe Arena in Morecambe.

We've the week to get through first. On Tuesday evening I have a trot over south of the water (Trent) to Clifton All-Whites, a club where I have coached and is held dear to my heart. Former Lincoln City striker Darren Huckerby began his career at the club. He had the pace of the cartoon character Roadrunner. The first time I saw him play was on the wing for the Imps at Notts County's Meadow Lane. He tore a strip off former Manchester United Scottish under 21 international defender Graeme Hogg that night. Ironically the Pies had released him a year earlier for being too small. Doh! 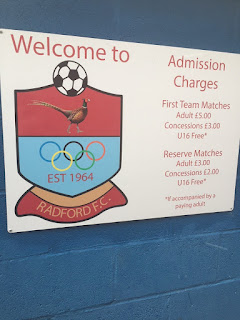 Radford FC are the visitors at Clifton. I was at their snowed-off League match last Saturday and found myself wandering around Radford, a tasty inner city area of Nottingham, having a few scoops on my tod. I like their manager Big Glenn Russell. He's a writer's dream who always makes me feel welcome at Selhurst Street, despite me being a Jonah. He'll often phone me after a game to seek my opinion of proceedings.

I stand with 'The Taxman' to the left of James 'Tosh' Turner's (legend) dugout. He's wearing an old Notts County manager's coat, with the Munto badge sewn on it from Sven Goran Eriksson's ill-fated reign as Director of Football. I honestly think that I gave him that coat, as they are limited edition and I gave mine away to somebody. 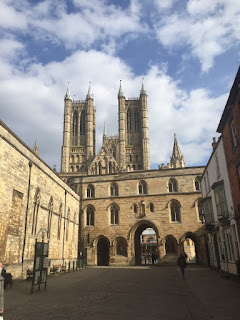 I was hoping to buy a half and half scarf as I follow both clubs home and away during midweek jaunts. Radford run out deserved 1-0 winners in a highly-charged and competitive game. Big Glenn celebrates his birthday with a few scoops after in the clubhouse. Tosh will be gutted that luck wasn't on his side with a strong penalty claim waved away and a point-blank header crashing off the crossbar. But Radford have heart and soul, with a will to win.

Ironically, we spend the afternoon in Lincoln city centre on Wednesday. It's a trip down memory lane for Sticky as we visit Chatterton's the butcher, Stokes High Bridge Cafe and a gin-shop on Steep Hill, where I buy three samples of Pickering's gin that will make my head explode. More importantly we snap up two tickets for the trip away to Morecambe from the Sincil Bank office. 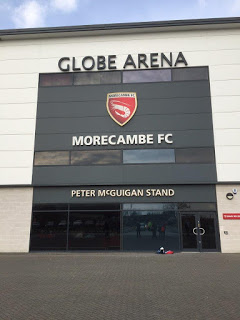 It's Friday evening and to be honest I'm fagged out after a debut 10-mile bike ride around Colwick Park, adjacent to Nottingham Racecourse. Ms Moon has gone into Nottingham city centre for scoops with some old work colleagues. I decide I need a warm-down, so take a stroll up to the Free Man at the top of Carlton Hill. I down a pint of Shipyard before returning home and settling in for the Holland v England friendly.

Scoring 14 Premier League goals doesn't count Jack s**t for Jamie Vardy, a player who gives every ounce of energy for his country. He's pulled England out of the mire on a few occasions. It's clear that his high-tempo game doesn't suit Gareth Southgate's possession-based tactics. England look the business and win 1-0. Vardy comes on for the last 22 minutes and actually doesn't get a touch of the ball. How very strange. 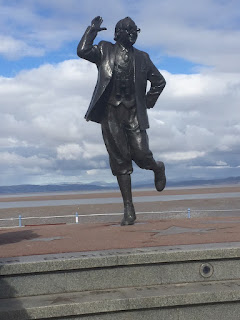 We're on the road at 9am. Ms Moon needs to tick off another shop that sells Costa Coffee. Wilford Lane's Co-op welcome her with open arms. The M6 behaves itself. We're parked up on the seafront by twelve bells. The wind has dropped with the old seaside town drenched in sunshine.

There's an emergency stop for Ms Moon at the Poundshop for a hairbrush, whilst Sticky Palms sinks a pint of Sunbeam at the stunning art deco Midland Plaza Hotel, complete with panoramic views across the bay.

We can't find a chip shop open on the front for love or money. We're pointed in the direction of Blackburn's Bay Cafe on The Crescent. I order up a couple of haddock and get chatting to some Lincoln lads in the queue. I clock a Codhead (Grimsby fan) in the shop with a 'Harry the Haddock' inflatable fish tucked under his arm. What the chuffing hell is he doing here? The Mariners are meant to be at Coventry City? Turns out it's his Stag weekend and he's with a minibus full of Imps. Ah, bless him. 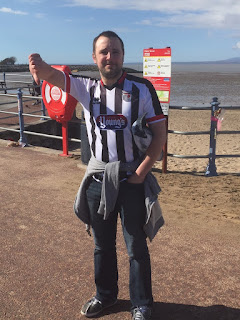 As we stroll back to the car a glum-faced child, with tears streaming down his cheek, has a tantrum with his mum, as they exit the amusement arcade. I witnessed these same scenes at Scarborough when Ms Moon spent all her tuppences on the slot machines.

We park up in a junior school, just a short walk away from the ground. A few seasons ago we watched Morecambe cruelly concede two late goals to a promotion-chasing Carlisle United. We were struck then by how friendly the club was and have followed their progress ever since. Legendary manager Jim Bentley should win awards for keeping them up on a shoestring budget. 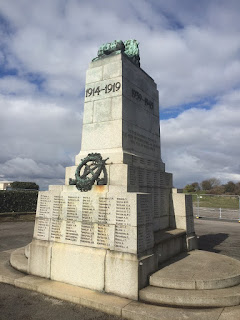 Morecambe is a town in Lancashire with a population of 35,000. It was known back in the day as 'Bradford by-the-Sea' due to its railway connections with Yorkshire. It was once a thriving seaside resort that has suffered decades of long-term decline. Both piers have bit the dust. For a number of years the Miss Great Britain Beauty Contest was held in the town.

Eric Morecambe took his stage name from the seaside town. Other famous folk from here include: Dame Thora Hird and 'Charity' from 'Emmerdale Farm. World heavyweight champion Tyson Fury is from the area. On February 5th 2004, 21 undocumented Chinese migrant labourers, hired to pick cockles at £5 for 25kg, by Chinese Triads, trafficked in on containers that docked in Liverpool, were found dead after being cut off by an incoming tide. 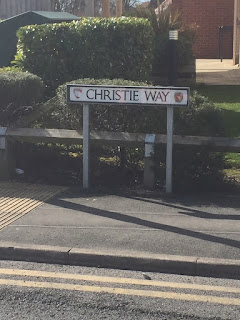 It's £21 on the gate to sit in the stand. I don't bother with a programme, donating to charity instead. We've half an hour to kill as my chest tightens and stomach churns. It's a massive game for the Imps who are desperate for a win to stay with the chasing pack. The DJ plays a decent set that includes: Manic Street Preachers, Elbow and Style Council.

Lincoln have a great first fifteen minutes and are proper on the money. Alex Woodyard and Lee Frecklington take a vice-like grip of the midfield as we stroke the ball about on a gluepot surface. Blackburn on loan defender Scott Wharton goes close with a header. The guy next to me is 'Mutt and Jeff.' We strike up a conversation but I have to keep repeating myself. It gets worse when he puts on his beanie hat which covers his ears. He reminds me of Cheryl's Dad (Joe) off the Royle Family. 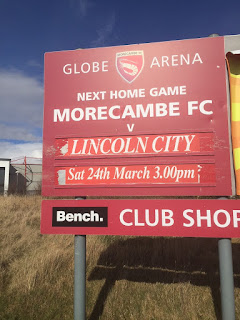 The first half is nowt to write home about as neither side threaten goal. Morecambe seem content with a point as they inch away to safety. The DJ cheers me up as he plays 'Friday I'm in Love' by The Cure and 'Geno' by the brilliant Dexy's Midnight Runners.

I rave about the pies (the meat ones, not Notts County). Morecambe's are meant to be Michelin star. I'm still sulking about our inability to break down the home defence, so Ms Moon disappears down the concourse to very kindly buy one. I've a face like thunder when she returns ten minutes later. The pie is soaked in gravy. Sticky doesn't do gravy ( yes I know, a weirdo). We don't speak for ten minutes, a bit like Matt Rhead and Matt Green in the first half. I apologise after we scuff another chance over the bar. 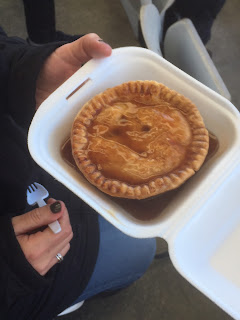 The Shrimps defend magnificently in the second half as Lincoln and particularly bargain-of-the-season Neal Eardley bombard them with a series of crosses. They are proving a tough nut to crack and start to gain confidence. A deflected shot clips the crossbar before McGurk sees a 25-yard free kick crash off the bar with Lincoln 'keeper Allsop beaten. Lee Frecklington's last-ditch effort curls agonisingly wide of the post. Seconds later the ref blows for full time.

Sticky doesn't do 0-0s, but on this occasion I'll have to suck it up as Morecambe, despite bizarre time-wasting tactics, have deserved a point from the game. 'The Lincoln' have huffed and puffed but failed to blow the house down.

Quiz question: Who is the only Non-Adult (17 years old) to have scored a penalty in the Premier League? Answer next week.

Man of the Match: That Grimsby fan in the Lincoln away end.
Posted by Sticky at 7:09 PM