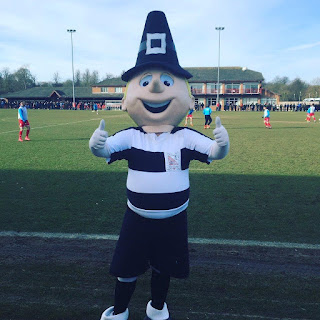 We begin the 180-mile journey back to Nottingham from Crawley Town's Checkatrade Stadium. Lincoln City have stunk the place out with a gutless, powder-puff, energy-sapping display. They've been played off the park by Harry Kewell's Red Devils. I'm fuming. To be honest, seething and so is Danny Cowley; sent to the stands for the third time this season. A year to the day I was weeping in the car on the way out of Burnley (most folk do) after a Sean Raggett 88th minute winner put Non League Lincoln City into the FA Cup quarter-final draw.

I'm still cross on Sunday morning as Ms Moon and I stroll hand-in-hand around Colwick Country Park, adjacent to Nottingham Racecourse, on a crisp winter's morning, blessed with wall to wall sunshine. 'The Princess' drops me outside 'Pryzm' nightclub on Lower Parliament Street - an area blighted by knife crime and fisticuffs in recent weeks. It's a run-down part of town, that has had its time. In its heyday bands such as New Order, in 1984, played gigs here, when it was The Palais - but then again, so did Mel and Kim. 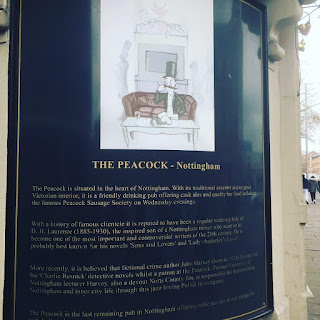 I turn right at the Victoria Centre and head up Mansfield Road for a haircut at Wisdom Hairdressing. Nottingham's No.1 Kurdish barbers. Refreshed, after having my ears lowered, I drop into The Peacock, one of the last remaining Victorian inns left in the city - with table service in the Lounge by ringing the bell. I sink a pint (Harvest Pale) in the Bar listening to Canadian Indie singer-songwriter Mac DeMarco on the iPod shuffle.

A plaque outside says that famous authors D H Lawrence and John Harvey (Resnick) have frequented the joint over the years. So did my Dad. It was HQ back in the day for all the journalists from Radio Nottingham. I treated my Dad, a competitive man, Frank, for lunch in here once, having beaten him 2 and 1 on the 18th Green, up at Wollaton Park Golf Club - he didn't speak to me for two hours after ... lol. 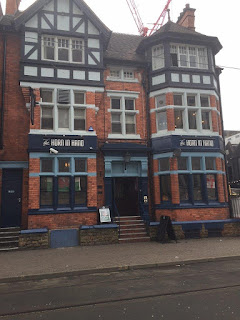 Next port of call is the Horn in Hand on Goldsmith Street (the artist formerly known as the Spread Eagle and Fagins). I waltz in just as Norwich City nod home a 95th-minute equaliser in the East Anglian derby. Big Mick McCarthy looks like he's swallowed some broken glass.

As I exit the pub I hear burning rubber and the sickening sound of a cyclist being unseated from his bike, before being thrown over his handlebars and crashing onto the tarmac. A dazed and confused Kamikaze Deliveroo cyclist says he 'switched off' (a bit like Lincoln City at Crawley) as he jumped a red light. A top of the range Mini has clipped the rider. They remind me of the family from the BBC 'sitcom' Outnumbered (probably from West Bridgford). They seem more concerned about the minimal damage to their precious car, than the well being of the boy, despite his error. I shoot from the hip when I write up the previous day's happenings (at Crawley). It's well received in Sussex, but less so in Lincolnshire. I'm sure we'll bounce back from two losses in seventeen outings (?) 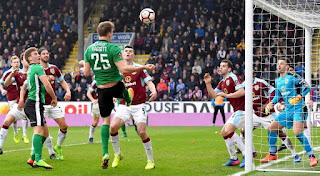 I spend Tuesday and Wednesday evening watching football in Sandiacre and Heanor respectively. The latter enjoy a last-gasp winner versus a Worcester City side that includes former Kidderminster Harriers, WBA, Coventry City and Notts County striker, Lee Hughes, still turning out at 41 years old - probably out of necessity.

It's Friday evening and I'm on the 'Keyworth Connection' Trent Barton Bus. I lived in the village for 45 years. Tonight former Nottingham Forest 'keeper, Head of Youth Development and Clough and Taylor's Chief Scout, Alan Hill, is waxing lyrical at Keyworth United FC about his time at The City Ground, working for the greatest manager of all time. 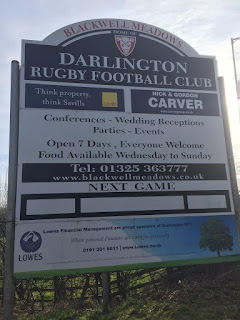 I have a Scoop up The Salutation, where Alan ('Hilly') was the landlord for five years, before hooking up with 'Dafty', Bobby and the 'Mayor of London' in the Keyworth Tavern. A wonderful evening is spent listening to Alan Hill story-telling. We land the £100 quiz first prize despite the diehard presence of a tanked-up 'A' Block in the audience.

My favourite Clough tale is when BC signs 15-year-old Cockney, Gary Charles, on a four-year contract. Having told the lad he'll play for England one day, Clough instructs the young Londoner to take his beloved black Labrador, 'Del Boy' for a walk down the banks of the River Trent. An hour later a panic-stricken Charles reports back in, minus Clough's pride and joy, who has slipped his leash. After a fruitless two hour search for the black Lab, Hill and Charles trudge into Clough's office to break the bad news. They knock on the door to see the wag-tailing man's best friend at Clough's side. "We've just brought the lead back, Boss." 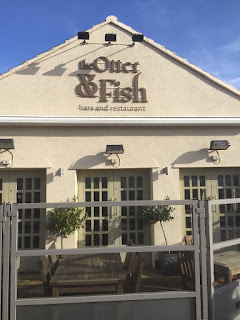 We hit the road to 'Darlo' at 10am on the nose. There's a pit stop up on Mapperley Tops at Costa so Ms Moon gets her coffee fix - without it we're all doomed as Fraser used to say on Dad's Army. Two hours of Graham Norton practically tips me over the edge. Kylie Minogue is his special guest - she's as dull as dishwater, although 'Better the Devil You Know' is a guilty pleasure.

Sticky Palms and Ms Moon finally tip up in the delightful hamlet of Hurworth-on-Tees for lunch at the Otter and Fish, a gastropub in the village. Our kid lives down the road in York; he retired on Thursday, so we meet him and his wife (Sarah) for lunch to celebrate. Lunch is heavenly, and so is the Black Sheep ale brewed just 30 miles down the road in Masham. Godley and Creme's brilliant No.3 hit from 1981, Under Your Thumb, is on the pub iPod shuffle. 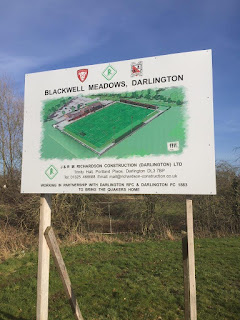 Blackwell Meadows is just a ten-minute drive away. Darlington is a large market town in County Durham with a population of just over 90,000. It lies on the River Skerne. It was heavily influenced by the Quaker families back in the Georgian and Victorian era. The town is known for its association with the modern railway. Notable people born in or associated with Darlington include: Zoe Birkett, runner-up on Pop Idol (soz, scraping the barrel), Frederick Dickens (brother of Charles), Glenn Hugill, producer of Deal or No Deal (voice of 'The Banker') and Pointless, comedian Vic Reeves and West Bromwich Albion midfielder James Morrison (not be confused with the singer).

Darlington FC were founded in 1883 and are nicknamed the Quakers. Their chequered history is well documented. I never saw them play at their old ground at Feethams; hence my visit today. The last time I saw them at Sincil Bank was back in 1990 when they turned us over 3-0. Our second worst manager in the Club's history (Chris Sutt** tops the list), Alan 'Sniffer' Clarke was sacked straight after the game. I'm not saying I was back home in Notts early that day, but recall seeing Des Lynam on Final Score. 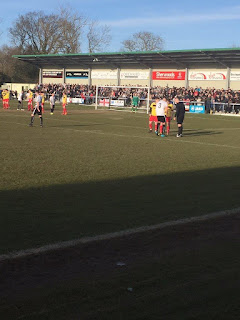 It's £5 to park the car, which to be honest cheeses me off. The steward explains it's one of the few ways to make money as they have to rent the ground off Darlington RFC (at £60k per annum as I find out later). I love the ground; it has a real football feel about it. I get chatting to a Kiddy fan. I mention that I like the way they play and rate their talisman Elton Nwgatala and flying winger Emmanuel Sonupe.

Manchester Non-League DJs are the benchmark when it comes to pre-match sets. Darlo's isn't doing too bad: Shed Seven, Electronic and Leicester-based indie band, Kasabian keep the ice-cold blood circulating in my toes. Ms Moon and I are both wearing five layers and yet still the bitter northerly chill and biting breeze finds the bones.

Kiddy dilly dally from the off and are fortunate not to be behind in the early stages. I strike up a conversation with a lovely Darlo fan. He gives me the lowdown on the politics. There's no love lost with the tenants, the Rugby Club. They seem to take pleasure (the Rugby Club) to rub the football club's nose in it where possible. No DFC signage is allowed. Staff blatantly sport Darlington RFC clothing at all food and drinks outlets.

It makes me feel sad that the Quakers, a former Football League club steeped in history, don't have their own home. The unscrupulous affairs of ex-owner and safe-cracker George Reynolds have been well documented. We passed the white elephant of a stadium on the A66 which was once the George Reynolds Stadium, home to Darlington FC, before their demise and relegation to the Northern League. 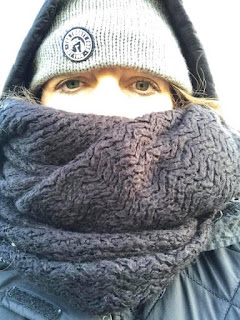 The Quakers take the lead on ten minutes through impressive towering defender Josh Heaton after hesitancy by the Kiddy 'keeper. The visitors spurn several chances before the half time whistle is blown.

The first twenty-five minutes of the second half is scrappy and disjointed. Kiddy send on their big guns, Joe Ironside and Emmanuel Sonupe, a former Tottenham Hotspur scholar. The game opens up. A ball is pinged towards Ironside who flicks a header over a Middlesborough loanee 'stopper'who is punching thin air. The ball rebounds off the foot of the post to a gleeful Ironside who levels up the game.

Both teams desperately search for the winner. It's cult hero, Stephen Thompson who makes it 2-1 to steer away Darlo from the relegation battle at the bottom of the National league North.

Man of the Match:  NFFC legend Alan Hill and Darlo's No.5, Josh Heaton
Posted by Sticky at 7:52 PM

Darlington players are fighting for
Their fans ,they know it's the fans club,a very good performance and three points, sticky well done to you for braving the cold north ,