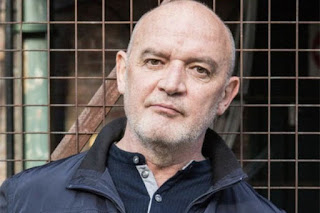 The journey back from Chesterfield's Proact Stadium is seamless. It's been an eventful day that has a happy ending. A supporter's life has been saved; they are recovering at a hospital in Derby. 'The Lincoln' have played well in patches and have turned up the heat in the second half; as they have a habit of doing. After a gruelling midweek battle at Field Mill, we'll take the four points out of the six on offer.

Ms Moon drops me off outside the Willowbrook pub (or as I call it the 'Winchester Club' off Minder) on Gedling Road. 'Dave' pours me a pint, there's no sign of Arthur Daley or Terry McCann. Christ on a bike, the place is stacked out with folk. What the chuff is going off? Bloody hell it's the Six Nations rugby. I'm stuck between the devil and the deep blue sea. If I go home Ant 'n Dec will be on, and they do my duck in.

I quaff a couple of scoops before retiring to my armchair, where I bury my head into The Boy on the Shed by Paul Ferris. It's a fascinating story of a Catholic boy brought up in the mainly Protestant town of Lisburn, in Northern Ireland. A gifted player, he later became a professional footballer at Newcastle United, where he gives a captivating insight into the club under the Keegan, Gullit and Robson tenure. 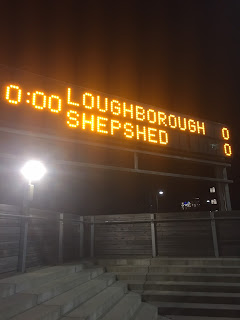 On Sunday lunchtime I steer clear of any hostelries in North and West Bridgford as the Tricky Trees take on the Rams in an early afternoon kick off at The City Ground. I sink a few pints at the Fox and Grapes in Sneinton before returning home to knock up the Chesterfield blog, which to my amazement has clocked-up nearly 3,000 hits.

I'm glued to the TV on Monday evening as serial killer, supervillain and cult hero Pat Phelan continues his reign of terror on the cobbled streets of Weatherfield. When we had Murphy the budgie, he always asked for the towel to placed over the cage when either Phelan or Fiona Phillips were on the television. Murph and I had a secret pact that if we ever won the Postcode Lottery we'd refuse to answer the door or accept the £30,000 winning cheque if Phillips trespassed on our manor.

I'm desperate for a midweek football fix, as this inclement weather is killing me and my world of Non-League football. I peruse the fixtures on Malcolm Storer's excellent On the Road blog. I check the Midland League and spot that Loughborough University v Shepshed Dynamo play on Tuesday night. I have lunch with my bestie work buddy, Lee, at the delightful Rancliffe Arms in Bunny, ironically on the Loughborough Road. I stay late at the office before heading back down the A60 away from Nottingham. 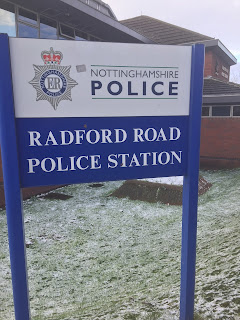 I saw a kid at Harrowby Utd in Lincolnshire, a couple of seasons back, called Danny Durkin from North Hykeham, just outside Lincoln. He'd already bagged 20 goals before the New Year. His Dad said he was a first-year student at Loughborough Uni and that he couldn't even force his way into the fourth team. The Uni played at the same level as Harrowby. Baffled by this I dropped the 'Head of Coaching' an email to query it. His reply was, 'you try and pick out players when over 400 trial?' "Thought that was your, job pal." Footnote: Durkin has already banged in 25 goals for Leicester Nirvana this season, at the same level.

It's entertaining fayre at Holywell Park as the Scholars and Dynamo play out a 2-2 draw. I like the look of Shepshed forward Shay Brennan. He makes intelligent runs, can hold a ball up bringing others into play and has finesse and class in front of goal. How he isn't playing further up the Pyramid is a mystery to me. 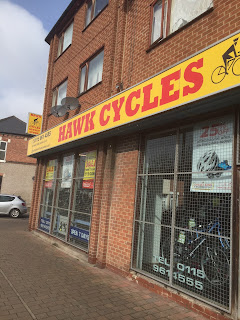 I can't be arsed to watch Barca v Chelsea on Wednesday evening. The Blues of Stamford Bridge only put a shift in when they feel like it. I'm glad they fall short in the Nou Camp and hope Trumpy Bolton's Leicester City can see them off on Sunday in the FA Cup.

I meet Ms Moon in the Free Man, a Wetherspoons establishment on the top of Carlton Hill. As a rule of thumb, it's not my cup of tea. From the upper tier of the Carlton No.27 bus the scene outside the front door is usually of chain-smoking, shaven-headed, drunken states hugging one another at any time of day. Inside we're pleasantly surprised. I get chatting to 76-year-old Sneinton-born Ernie Raven, who ran Carlton FC for 30 years - it warms the cockles of my heart; what a lovely chap.

Lincoln v Grimsby has sold out and I'm not feeling the Pies v the Stags; it'll be nip and tuck as there's too much at stake. It's attempt No.3 at chalking off Wellingborough Whitworth, my final tick-off in the United Counties Premier League. 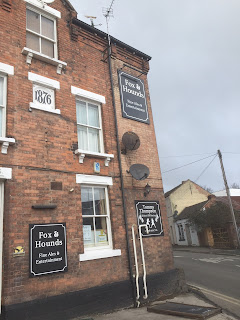 I've put some timber on in the last twelve months which needs addressing for the summer season. I wander past Tesco before turning right down Station Road towards Netherfield. In 1970 my parents bought me my first bike from Graham Read's cycle shop. Nearly 50 years later the shop is still trading, but under a different name. I'll be pounding the canal towpaths, cycle paths and the picturesque Colwick Park on my new bike on balmy summer evenings (lol) in an attempt to shift a stone or two - you can't be called Sticky and weigh-in at 14 stone.

I walk past the Fox and Hounds on the Carlton/Netherfield Gaza Strip. It doubles up as Tommy Thompson's Boxing Club. I'm not sure if it was a bout gone wrong, but there was a serious fracas and affray in there on New Year's Day. I need to tick it off, but it doesn't look very welcoming.

The forecast doesn't look too good for the Midlands this afternoon. Ms Moon isn't feeling it, but wants to drive in case of snow, so I'm not alone. All's well until the M1. You can barely see your face in front of your hand, never mind the traffic. Wellingborough Whitworth and opponents St Andrews have both confirmed that the fixture is ON. 'The Princess' is getting stressed with the blizzard-like conditions. We abort the motorway at Junction 23 and head back oop North. 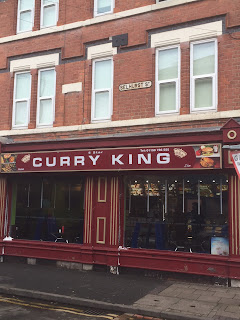 Blog legend, 'Big Glenn Russell', the manager of Radford FC, says that their Selhurst Street venue (On Call Arena) has been given the green light. Jesus wept, I've proper got the monk on (for any southerners reading this it means I've got it on me). To make matters worse there's been a crash on the M1. Even Paul Gambacinni can't cheer me up with the brilliant 1986 hit 'Digging Your Scene' by Dr Robert and The Blow Monkeys.

We roll into Asda on Radford Road twenty minutes before kick-off. I seriously think we're going to perish outside. I know how Captain Oates felt when he said in 1912 on the Terra Nova Expedition "I'm just going outside and may be some time." (it's minus 1 in Radford btw). 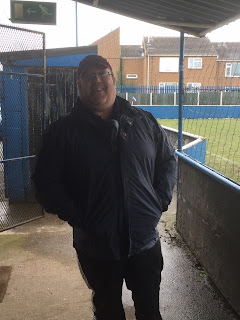 It's £5 on the gate and we throw in a couple of quid for some raffle tickets. Big Glenn tells me I'm barred (I've a reputation of being a Jonah). It must be cold as the big wuss isn't wearing shorts. We wander over to the far side and take cover; even the club shop and tea bar are closed as a stiff breeze blows across the ground as a snowstorm looms.

Ms Moon is sucking lemons. I seriously can't see the good lady going the distance as a blizzard and snow flurries blow in. Both teams give it their all in diabolical conditions. Radford take the lead with a smart finish from their lanky winger. The visitors, Graham St Prims, from across the cattle grid, restore parity with a scruffy equaliser. It must be cold as Big Glenn (a) doesn't shout out a loud cuss as the ball crosses the line and (b) doesn't hurl his baseball cap to the ground in a fit of pique. 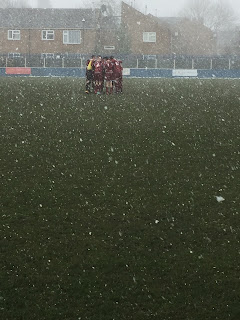 The ref', who has been excellent by the way, under the beady eye of the assessor in the stand, has had enough and blows for half-time a few minutes early. Volunteer officials frantically try to mark the lines out covered by snow. The Ref's not interested and the game is abandoned - my first for weather since the Pies v the Wombles (Dons) in 2001 'down the lane' due to a pea-souper of a fog. 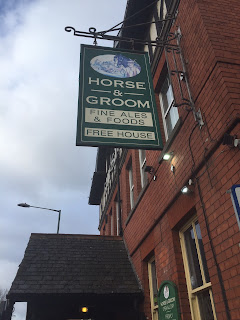 I've proper got the hump. I'm stewing and steaming (cross). They shout out the raffle numbers and I'm two off the winning prize - the red mist descends. The referee's assessor doesn't seem unduly concerned as he mops up the sandwiches, pork pies and cakes in 'hospitality.'

I bid farewell to Big Glenn, who thanks me for coming, despite the Jonah curse striking again. I wander up Radford Road before diving into a classic old street boozer called the Horse and Plough, an old Shipstone's house. I can't arf pick 'em.

Attendance: Not a Scooby, but we were one light at half-time. (Ms Moon watching Four in a Bed)

Man of the Match: Pat Phelan
Posted by Sticky at 7:41 PM

Hmm is anyone else experiencing problems with the images on this blog
loading? I'm trying to find out if its a problem on my end or if it's the blog.
Any feed-back would be greatly appreciated.

Might be my fault mate, I didn't compress the photos. What device were you using?