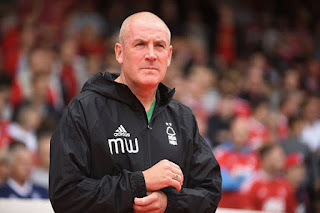 It's Boxing Day morning and I'm champing at the bit for some yuletide football. We entertained Ms Moon's family on Christmas Day. Tragically we were a man down at 8pm, with the Princess retiring up the wooden hill and into bed, midway through a crucial game of 'Who am I?' Due to the dreaded lurgy. I was washing all the pots at gone twelve bells, whilst listening to David Warner caning the England attack on Test Match Special, before hitting the sack myself.

I race out of the house. I open up the Mondeo on the A46 towards Lincoln. The road is as clear as a bell. I'm parked up in Lincoln United's Ashby Avenue beautiful, tree-lined ground in less than 40 minutes. It's my third viewing this season of 'the Lincoln Real Madrid', in their all-white strip.

The 1pm kick-off suits me down to the ground. I could have gotten greedy, as the Imps entertain Stevenage Town at 3pm, but one game is enough for me. It's a rather pricey £9 on the gate and £1 for a golden goal ticket. I'm absolutely 'Hank Marvin' so dive into the tea bar and grab a steak pie and rancid cup of tea. 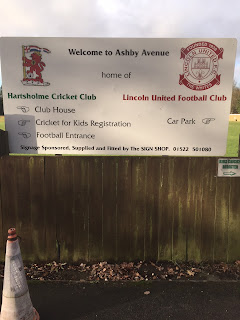 The game is a thrilling end to end Christmas cracker with the visitors from Cleethorpes running out 5-4 victors. I meet an eccentric groundhopper from Rugby. He says there are 23 teams in the UK who are named the Magpies. His intention is to visit all 23 grounds - I daren't tell him that Lincoln are nicknamed 'The Whites.'

Coventry Copsewood v Ilkeston Town was the nominated game for Saturday afternoon. It's hosed off/snowed off by 10am. I've had my beady eye on happenings at The City Ground. Defeat today against relegation-threatened Sunderland will surely see a 'Greek tragedy' with Mark Warburton shown the door by owner Evangelos Marinakis. He was fortunate to inherit an Uwe Rosler assembled squad at Brentford's Griffin Park. Our Scottish office said that his recruitment policy at Rangers was poor, frittering away money on a string of average, unproven players. 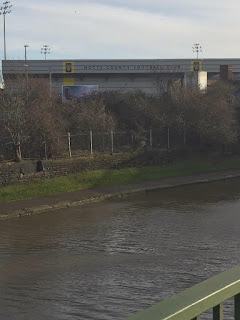 My last outing here was against Neil Warnock's Cardiff City, who cruised to a 2-0 victory without getting out of second gear. Sticky junior was fuming that day. He ripped up more losing betting slips than Paul Merson. I decide it's best not to let him know I'm down here today. I walk along the banks of the Trent and queue up at the ticket collection point to the rear of the Brian Clough Stand. I'm sat in my seat before 2pm - even the 'keepers aren't warming up yet. I like to hear the Forest DJ's set. It's not up there with Atherton Colls, Radcliffe Borough or Salford City, but at least he puts some thought into it.

Sunderland is a city in Tyne and Wear in north-east England with a population of over 175,000. It is a coastal city at the mouth of the River Wear. It is well known for its coal-mining, shipbuilding and the automotive industry. A person born or living in the area is known as a Mackem. Famous people from Sunderland include: actor James Bolam, journalist Kate Adie, actress Melanie Hill, the inventor of the electric light bulb Sir Joseph Swan, singer and 6 Music presenter Lauren Laverne, musician Emeli Sande, David A. Stewart from the Eurythmics, footballers Nigel Clough, Michael Gray and Jordan Henderson and former England Test fast bowler Bob Willis. 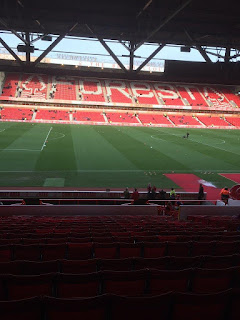 The Forest DJ must have been on the sauce over the festive period, he spins Rod Stewart's 'Young Hearts Be Free Tonight' - previous owner Fawaz would have issued a P45 for this faux pas. He redeems himself as the Prodigy's 'Breathe' booms around the stadium as the teams emerge from the tunnel.

Forest USA full back Eric Lichaj is being skinned alive by McGeady and Matthews as crosses fly in from the Sunderland left-hand side. Forest are playing that boring, possession football which sent me to sleep against Cardiff City a few weeks back. 'Keeper Jordan Smith has a kick like a mule, but never has the chance to show it off. It's ironic that Joe Worrall lumps a ball forward which catches John O'Shea napping, Daryl Murphy fails to convert.

Forest pay the price for another cross that comes sailing in from the impressive Adam Matthews, Paisley-born, Irish international, Aiden McGeady gets between two defenders to nod the ball home. I'm shocked to hear the boos ring out around the ground as the referee blows the half-time whistle. I've only ever booed once at my team (Lincoln City) and that was at the manager Alan 'Sniffer' Clarke back in 1990, when the Imps were 3-0 down to Darlington at half-time. 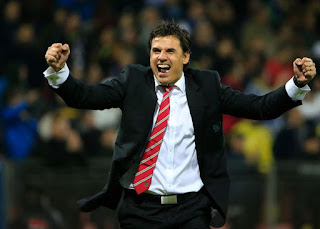 I scroll through the live scores at half-time. Lincoln and bitter rivals Forest Green Rovers are at one a piece. There's no love lost between the two clubs, players and managers since an alleged spitting incident at The New Lawn earlier in the season.

Sunderland shut up shop in the second half, but play a more purposeful brand of possession football. Forest's only shining light is 34-year old David Vaughan. He dances on the ball and is brave with his decision-making; taking risks with his passing, unlike his teammates. My pals have raved about tricky winger Barrie McKay. He's been hooked by Warburton on the hour in both games I've seen. Everton loanee Kieran Dowell is another they've talked-up; again he flatters to deceive. 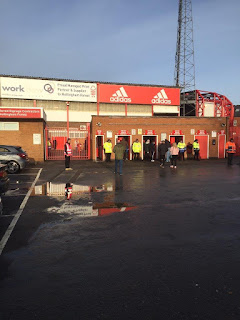 Former Black Cats' Irish international Daryl Murphy is removed from Tricky Trees' attack with a lower back injury. The bloke behind me remarks that he hasn't been the same since the Republic of Ireland's failure to qualify for the World Cup finals. He's replaced by misfiring, unsettled striker Jason Cummings, another Warburton bum signing.

Sunderland run the clock down, and are fortunate to see an Eric Lichaj effort thump off the post in the final kick of the game. The boos ring out around The City Ground, as the vultures' circle with Warburton edging ever closer to the trap door.

Man of the Match: David Vaughan
Posted by Sticky at 11:17 AM

well... I've always insisted I'm not a groundhopper but if I come across as that eccentric then maybe I am fooling myself. Remember the Billy Mackenzie book - it really is very good.

Hey Darren, you were great fun and I look forward to bumping into you again soon. Definitely going to read the Billy book. Regards, Sticky