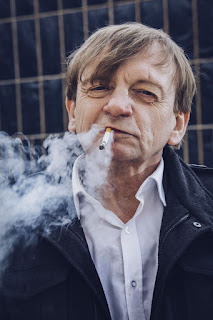 It's Saturday evening and Ms Moon has just dropped me off on Main Road in Gedling. I wander into The Willowbrook, a Castle Rock pub. Back in the day it was called the Willowbrook Club. We used to go in there to socialise after South Notts Village League cricket matches against Gedling Village. It reminded me of the Winchester Club off Minder, with Dave the landlord.

I quaff a pint of real ale as I scroll through twitter checking on all the Non-League final scores. As I exit the pub a white illuminated light catches the corner of my eye. I walk into Ladbrokes flashing a cheesy grin. I'd expected security in the joint as I'm about to empty the tills. I produce my winning ticket. A grumpy cashier at the fag end of a twelve-hour shift counts out a £27.50 return. Stoke City, Man Utd and Blackburn Rovers - I really can't 'arf pick 'em. 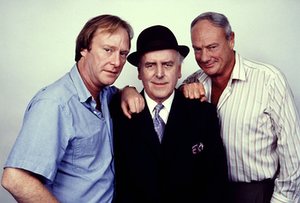 I've been mooching about the house for a few days. I need summat to get my juices flowing. The wintry rain is seeing game after game fall by the wayside. I spot that 'The Lincoln' are playing Peterborough United in the much-maligned Checkatrade Trophy at Sincil Bank. The Imps are two games away from playing at Wembley for the first time in their 135-year-old history. Folk are boycotting the competition because of Premier League under 21 teams being allowed in. Chuff that for a game of soldiers, if it means a trip to the Twin Towers.

I squeeze in enough time for a re-visit to the Sea Queen on Rookery Lane, a mile outside Lincoln city centre. Mini cod, chips and peas are a steal at £3.50. I have to eat them on the hoof as the rush-hour and football traffic backs up on the Newark Road.

I cut through a snicket and find my way onto the High Street. Hell's Bells, I've never seen so many rozzers parked up and patrolling the street corners. They must have thought Sticky jnr was rocking up with Dad. 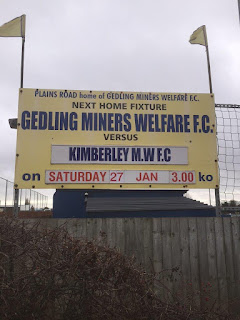 It turns out to be the game of the season. It's 2-2 after an hour. Former Stockport County forward and ex Imp, Danny Lloyd has scored a belter. Our man Danny Rowe, on loan from Ipswich Town, has too. The fourth official indicates there's four minutes extra time. Former Posh wide man and often Lincoln's talisman, Harry Anderson, scores a cracker on 92 minutes. A lung-busting 50 yard run by Matt Green, who must be out on his feet, sees him outpace a tiring defender, before drawing the 'keeper and finishing with aplomb. Me and the bloke behind me high five one another. What a wonderful evening it has been.

I'm still buzzing the following day despite being stuck in traffic on the M6 North. I spend the evening at a Premier Inn close to Manchester Airport with a colleague, George. I'd have taken him to a game but his flight didn't land until gone 8pm. It's ironic that I'm in Manchester when news breaks of the death of The Fall lead singer Mark E Smith. They are a band I've followed since the early days of 'Live at The Witch Trials and 'Grotesque.' Apparently every time he bumped into Morrissey he used to say "Morning Steven."

It's Friday evening and the end to a frustrating week at work. I need to relax with a few beers. Ms Moon is up Mapperley Tops with her mate Jill, drinking cider at a Wetherspoons watering hole. I place another little bet at Ladbrokes in Hockley, before legging it up towards Canning Circus. I love a mini pub crawl up here. On February 2nd The Overdraught will be a welcome addition to this 'Real Ale Quarter.' I visit the usual haunts - Hand and Heart, Sir John Borlase and Organ Grinder, before returning home to play The Cure back catalogue on You Tube TV. 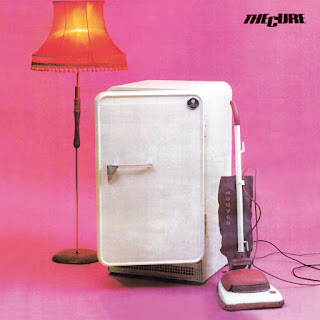 We both have the mother-of-all lie-ins on Saturday morning. I'm in proper Mrs Doubtfire mode once I kick-start the morning. Every cupboard in the kitchen is emptied, cleaned and replenished. I had hoped to watch my old club Keyworth United up at AFC Kilburn near Belper. It bites the dust due to a waterlogged pitch. It's either going to be Heanor Town or Gainsborough Trinity.

I fancy another peek at Shay Brennan the Shepshed Dynamo forward who caught my eye at Coventry United a few months ago. It sways my decision to travel to Heanor as Shepshed are the visitors. The pitch has been passed fit by a Conference standard referee. It's only a half an hour trip up the road.

Paul Gambacinni's Pick of the Pops is on Radio 2. The year is 1985; the same as it was on TOTP 2 on Thursday night. Ms Moon loves the 80s. She sings her heart out to 'I Know Him So Well' by Elaine Paige and Barbara Dickson. I'm surprised it doesn't cause a multiple pile-up on the A610, but it does beat my attempt at 'Atmosphere' by Russ Abbott on Thursday evening. 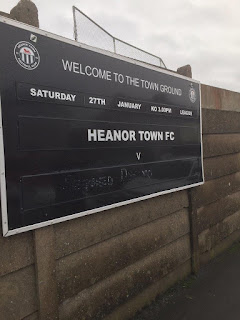 The pitch is cut up quite badly and extremely muddy. I'm informed by a supporter that the ref from the Birmingham area has been here since 2pm and has inspected the pitch suited, booted and in a pair of hush puppies at a bargain-priced £29.99 from Dolcis.

I notice the officials appear from out of the dressing room at 2:40pm; it's good of them to grace us with their presence. There's been no rain or any changes in the weather conditions since 2pm. One or two Shepshed players are in his ear about the pitch condition. I might add there's no standing water. 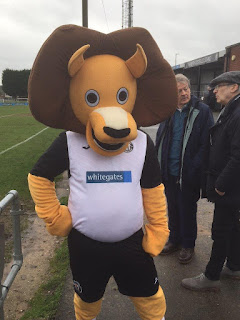 I smell a rat immediately as I see the bearded official heading down the slope towards an area of concern. Where the hell has he been for the last half an hour? Perhaps him and his two assistants were watching an old episode of Crossroads on the i-Pad or, maybe playing a game of gin rummy.

I pick up my pace and leave Ms Moon for dead as I stalk the ref up the touchline. "Don't you dare call this off now when you've been here since 2pm" I shout in vain. There's loads of headshaking and finger-pointing as he addresses the two managers. I know the game is off but want my pound of flesh.

I'm leaning on the gate that's close to the entrance to the dressing rooms as the flustered official draws ever closer to me. Lenny the Lion, the Heanor mascot, is next to me. We've agreed that I will rinse the ref and he'll maul him. I don't swear (Ms Moon thinks I might of done). I remember the finger-wagging and "bungling fool", "blithering idiot", "absolute clown" and  "blatant disregard regard for paying spectators" before I storm off in the direction of the turnstiles with a hugely embarrassed Ms Moon traipsing twenty yards behind me. 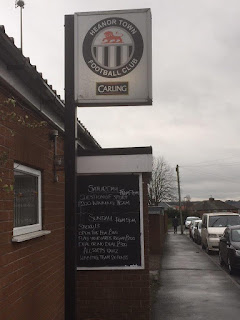 I tell the lass on the turnstile to keep my money but not to pay 'Benny' from Crossroads one bean in expenses. Ms Moon apologises for my behaviour. I'm so pent up that I take a wrong turning. It's a full five minutes before I'm reunited with a horror-struck Ms Moon.

'The Princess' knows it's probably best to keep schtum. I don't lose my shit too often. A few memorable occasions include the Charlton Arms in Ludlow, Malmaison in Liverpool and South Yorkshire Police in 2002 (let's face it who hasn't fallen out with them). 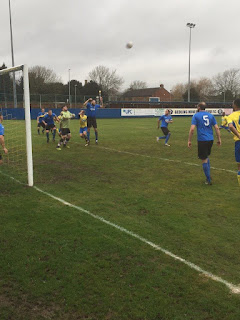 Ms Moon tries to lighten the mood by turning on the radio. Jesus wept, even Gambacinni has finished his shift. I hate Radio 2. I hate football. I hate everybody. That dimwit of a ref has given us five minutes to find another game, whilst he trims his beard and gets spruced up in anticipation of a night out in Nottingham's hipster area of Hockley.

I'm fuming. Who the hell appointed the drongo? In a complete 'diva' fit I phone up the Derbyshire FA to complain about the imbecile. On what is their busiest day of the week I'm not surprised to hear they're closed until Monday morning.

I come out of my sulk and catch my breath by the time we reach Basford. Gedling MW and Kimberley MW are playing up on Plains Road. It's 3:30pm as we stick the car in the Nuffield Gym. The gateman is still on sentry duty. I hand over £10. Just as the turnstile gate clicks over once, I see a Kimberley corner sailing into the box which enables Alex Doyle to open the scoring. 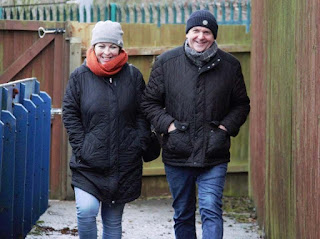 I love coming up here. My first visit was back in 2007 when I witnessed Gedling MW upset the applecart with a fingernail-biting win over high-flying Atherstone Town. I met Tony Hay that day. He's remained as a volunteer through good and bad times. I introduce him to Ms Moon as he snaps away on his camera at the far end of the ground. Tony kindly invites us into hospitality for refreshments and a sandwich. Gedling equalise close to half-time with a well-worked goal scored by debutant Connor Croft.

I check my betting slip at the break before scrunching it in my hand and lobbing it into the nearest litter bin. I can hear the foghorn dulcet tones of the Kimberley manager, but he's conspicuous by his absence from the technical area. Rumour is that he's serving a six-match ban following a touchline misdemeanor(s) (he's on first name terms with the Notts FA). I notice the acting manager is receiving instructions from the suspended gaffer by walkie-talkies they bought from Smyths Toys in Colwick en-route to the ground. It's comedy gold as the messages are relayed to the players word for word. It like a scene from Phoenix Nights with Max and Paddy: "Can you hear me now?" 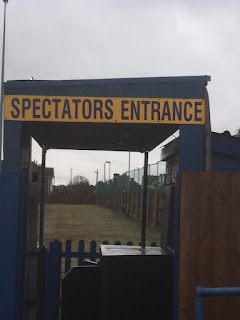 We wander over the far side. I have a chat with 'Kimbo' legends Stephen Hobster and Danny Staley. 'Hobo' has just bought into a pub called the 'Caught 'n Bowled' in Giltbrook (get yourself down there folks, it's named after Notts ledge Samit Patel). The suspended manager does an embarrassing 'Dad Dance' as Kimberley grab all three points following a late strike from former Nottingham Forest defender Aaron Mitchell.

Man of the Match: Ms Moon for putting up with my hissy fits xx
Posted by Sticky at 7:14 PM