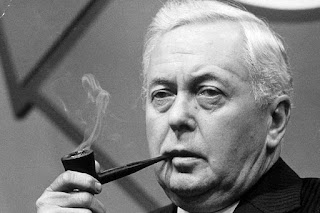 It's Monday lunchtime on 18th December. I'm browsing the internet looking for a Premiership fixture in the New Year that'll get my juices flowing - I only do one a year. Last season we went to the wonderful, cobbled backstreets of Goodison Park to watch Everton and champions-elect Chelsea. Wantaway Brazilian-born striker Diego Costa was different gravy that day. He turned Phil Jagielka and Ashley Williams inside out. His attitude and effort were astounding, considering he wanted to toodle pip off to China

I scroll down the BBC website Premiership fixtures for Saturday January 13th until one catches my eye. It's a game that both teams will believe they can win. I punch out the Huddersfield Town ticket office number out on my mobile. The phone is picked up instantly. I receive a warm and pleasant customer service experience. I bag two tickets for £30 each in the lower stand of the 'Fantastic Media Stand' behind the goal. The phone call is in complete contrast to the one made minutes earlier to those buffoons on reception at Eden Hall, near Newark, when trying to book Ms Moon and her daughter a spa day as a Christmas pressie. After a heated conversation, a bad-tempered email and provocative tweet, calm is restored, soothed with the thought of a trip up to West Yorkshire.

I'm roused from my sleep early on Friday morning by the Nottingham Post app pinging on my phone. I rub sleep away from my eyes before fumbling for my glasses. Blimey O'Reilly, the recently refurbished Nottingham Railway Station is on fire. Crikey, I hope they're no casualties, including the new pub (BeerHeadZ) on Queen's Street, that opened up a few days ago. 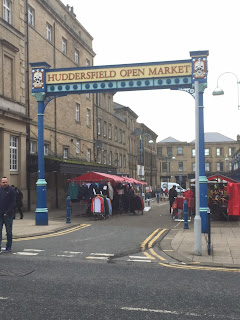 More breaking news is coming in from Ms Moon on Canal Street. An emergency trip to the dentist on Carlton Hill has resulted in a couple of back gnashers being whipped out - I can't see the good lady being too chipper for the rest of the day.

I have a couple of tea-time real ales (Liverpool Pale) at the cosy Old Volunteer on Burton Road. Ms Moon joins me in the Willowbrook on Gedling Road. Back in the day it used to remind of the Winchester Club in the TV series Minder.  She sips on a prosecco having removed a full bag of blood-stained cotton wool from her back gums. I mention Joe Jordan, Shane McGowan and 'Jaws from James Bond - it doesn't crack a smile. I just receive the death stare. The 'Sheffield Steel' derby is a bore draw. I turn the lights out and head up to bed. I slip a £2 coin under the Princess's pillow.

Ms Moon is as fresh as a daisy on Saturday morning after a twelve-hour snooze-a-thon. We're up, at 'em and on the M1 heading north by 11:30am. Trumpy Bolton's favourite disc jockey, Graham Norton, is on the air on Radio 2. West Yorkshire born Young Ones actor, Ade Edmondson, is his special guest. I've always thought of him and his Cambridge Footlights cronies as a bit smug, but we both enjoy his endless, charming anecdotes. 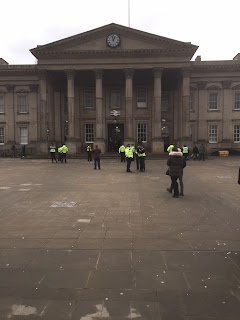 Sat Nav guides us into a car park on St Andrew's Road, a ten-minute stroll away from the town centre. The good lady needs her coffee fix. It quashes any chance of a pub lunch. After a saunter up to the railway station and a couple of photos of the Harold Wilson statue, we ask a friendly policeman where the nearest Costa Coffee shop is, before Ms Moon turns into the Tasmanian Devil.

Huddersfield is a large market town in West Yorkshire with a population of over 160,000. It's a town of Victorian architecture with the railway station being a Grade 1 listed building. John Betjeman described it as "the most splendid station facade in England." 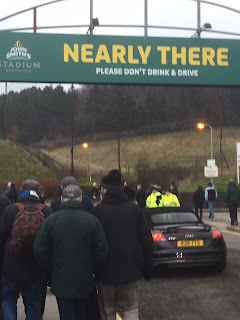 Huddersfield Town were founded in 1908 and are nicknamed the Terriers. In 1926 they became the first League club to win three consecutive Division One titles. Well known managers include Herbert Chapman and Bill Shankly. Last season they were 66/1 to be promoted to the Premiership. Emotional scenes were witnessed at Wembley, with mission accomplished on penalties. German manager David Wagner was given the 'freedom of the city.' Highest transfer fee paid is £11,440,000 to Montpellier HSC for Stephen Mounie. Highest Transfer fee received is £8 million for Jordan Rhodes from Blackburn Rovers.

We put more hard yards in as we slog it through town, across the A62 and onto the Kirklees Stadium. Incredibly 'our lass' needs another caffeine infusion - at this rate she won't sleep for a fortnight. I take my place in the lower section of the Media Stand as 'Chelsea Dagger' by Glaswegian indie band The Fratellis blasts out of the PA system. My only other visit to Huddersfield was at their old Leeds Road ground for a Sherpa Vans Trophy game versus Scarborough Town back in 1989 with Trumpy Bolton on a filthy Monday evening. The Terriers lost 2-1. Compare the two clubs now?

Jesus Christ, every seat has one of those bloody clappers on them. They won Leicester City the Premiership, as they kept putting off the opposition. A little lad comes skipping down the row behind me and immediately starts shaking his clapper. In his excitement a huge Frankfurter sausage falls out of his bun and rolls next to my foot. He sheds a few tears as I offer him the 'ten-second rule.' 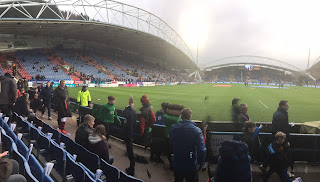 The DJ set comprises of Madness (twice) Gala, 'Freed From Desire' (twice) and randomly 'Runaway' by Del Shannon. I admire the Hammers; always have. They have a fanatical fan base and believe in youth. The much-maligned Moyes has named a few young guns on the bench. I remark to Ms Moon that ex-Culture Club drummer Jon Moss is the referee today. "Is he?" she replies. Before noticing my smirk and digging her elbows into my ribs.

It's a tame game in the opening 25 minutes. The Terriers enjoy the lion's possession of the ball with only Tom Ince having the courage and guile to prise open the Hammers rearguard. On 15 minutes there's applause for 15-year-old Katelyn Dawson who tragically died in a horror crash whilst waiting for her school bus. The West Ham fans clap as one. 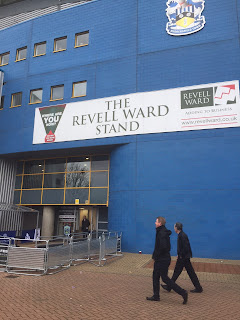 The game turns on a sixpence. A ridiculous pass from the 'keeper to Joe Lolley sees him surrounded by the Irons. Mark Noble on his 361st appearance gets a foot in before a clinical finish.
Former Non-League attacker Lolley makes amends on 40 minutes with a sublime finish after cutting in from the right and leaving Adrian with no chance following a left foot curling finish. Mascot 'Terry the Terrier' joins in the celebrations. He throws in more shapes than Arsenal striker Alex Iwobi at an early hours North London house party.

Huddersfield are still in the changing room when West Ham retake the lead just ten seconds into the second half (is this a record?). Austrian striker Marko Arnautovic, a £20 million Slaven Bilic signing, catches the Terriers napping before smashing the ball home. 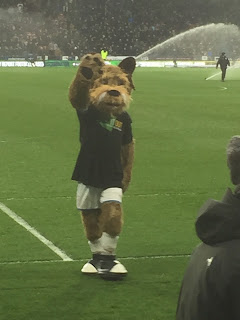 The Irons counterattacking football is breathtaking on the eye. Arnautovic is terrorising the Terriers. He slips in Manuel Lanzini to make it 3-1. The same combination end the game as a contest, five minutes later, as the Austrian muscles his way through a shell-shocked defence, with the ball falling to Lanzini to fire home.

A flurry of substitutions by David Moyes ensure their lead is protected and that their rich vein of form continues. Huddersfield, on this shaky performance, will need reinforcements to bolster a fragile backline.

Man of the Match: Marko Arnautovic - class
Posted by Sticky at 7:59 PM

Hi Sticky, sorry for being a tad pedantic, but West Ham's nickname is The Irons (note the plural), so Mark Noble is The Irons's Mark Noble.
Scunthorpe United are known as The Iron, as I'm sure you know.
Cheers

You should read that section again mate. There's a full stop between 'Irons' and 'Mark Noble' ie two different sentences. The wording, punctuation and grammar are correct!! In any event, it would never be "Irons's Mark Noble" but "Irons' Mark Noble".

Loved all the descriptions even if the match report was a bit short, but to also be pedantic "The Premiership" is now a rugby competition and the First Division, as I still call it, has been The Premier League for a few years now.

That Jon Moss reference was pretty good, how did I miss that?

Have a look at my offering on Kumb.com if you like.