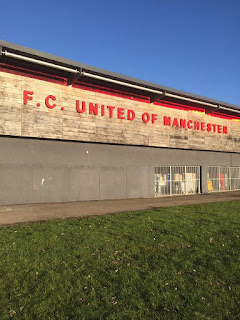 I'm shuffling across Trent Bridge with thousands of disillusioned Nottingham Forest supporters. Another toothless display at The City Ground has seen them defeated by relegation strugglers Sunderland. I cut through the 'Creative Quarter' before walking up the hill into Hockley, Nottingham's hipster area - (full of young 'uns with ridiculous beards, who drink craft beer).

I clock a bit of hot totty, out of breath, slogging it up the hill - it's Ms Moon. I open the door for the good lady to step into Bar Iberico on Carlton Street. It's 5:30pm on the nose, just in time for the 'Rapido Deal.' We tuck into four delicious tapas dishes accompanied by a glass of Rioja. The rest of the evening is spent with friends diving in and out of the splendid bars and pubs that Nottingham is famous for - *fails to mention that he popped into the Herbert Kilipin, on Bridlesmith Walk, when he stated weeks earlier that he wouldn't step foot in the place again - was outed on social media*

I arrive at the foot of our stairs on Sunday morning to be met by Ms Moon who has breaking news on her Facebook feed, that Mark Warburton and his Scottish backroom staff have got the hoof. The job was too big for him. At least the club won't need to shell out any more fees, to the same agent, for sub-standard players from north of the border. 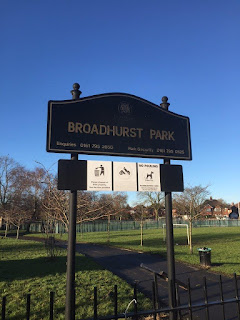 There's been chuff all midweek football on, the inclement weather has put paid to that. I can't even be bothered to climb out my armchair on New Year's Day - we watch six episodes of Gavin and Stacey instead. We're booked in at a trendy boutique hotel in Newcastle on Saturday evening. The plan was to have some lunch at Tynemouth (Newcastle by-the-Sea) and then drive further up the coast to Croft Park to take in Blyth Spartans v Gainsborough Trinity. It's tipped it down with rain for most of the week and they are forecasting 40mph winds in the north-east. I pull the plug on our weekend away. I spot F.C. United of Manchester are taking advantage of the opportunity of playing on a Sunday with 'United' in FA Cup action against D***y on Friday and 'City' at home on Saturday.

Oh, what to do on Saturday? It's dank, damp and miserable again in our neck of the woods. I ask Ms Moon if she fancies some brunch in town with a trip to the cinema and a few drinkies after - she about snaps my hand off. I've read rave reviews on Molly's Game starring Idris Elba. 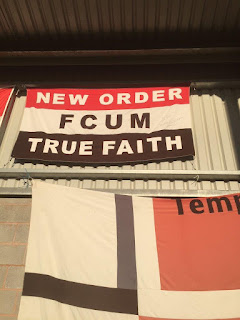 There's a heavy police presence in the area, with several roads cordoned off, as we walk to the bus stop on Carlton Road. A police car is being loaded onto the back of a lorry as we jump onto the No.25 bus into town.

After some brunch at the Hideout on King Street (had to use Google maps to find it), we pitch up at the Broadway Cinema to watch the film and are blown away with the fast pace of the plot (I can't arf pick 'em). We enjoy a few tea-time scoops at the Curious Tavern and Fox and Grapes before heading home back to Carlton for the evening. 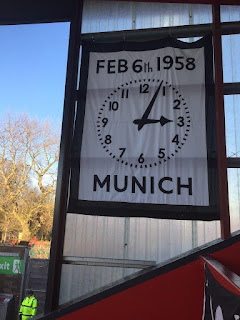 It feels a little strange going to football on a Sunday. Ms Moon waves me off after very kindly making me a bacon cob. I decide to go up the A1 and across the M62 as there are no 50mph maximum speed limits. Five Live are broadcasting a documentary of tales of folk who have been stalked. It has me gripping the steering wheel. It scares the living daylights out of me. Ms Moon phones up to see how I'm progressing on the motorway. I tell her to stop stalking me and end the call.

Alastair Bruce-Ball and John Hartson are commentating at Rodney Parade as Newport County and 'Dirty Leeds' cross swords in the third round of the FA Cup. It's one of ten grounds left for me to tick off. 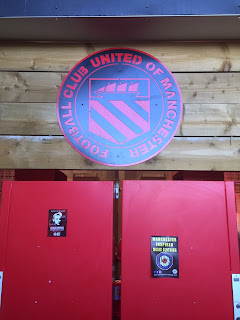 I'm up in Moston in less than two hours and parked up in St Matthews RC High School by 1:30pm. Even the car park attendant hasn't started his shift yet. I listen to the fag end of the game. A wry smile lights up my face as Newport snatch a late winner. I cough up to the car park chap that I've been here for ages and part with £3.

Moston is a district of Manchester two miles to the north-east of the city centre. It has a population of 14,000. Notable folk from the area include: the actress Marsha Thomason, former Man City, WBA and Nottingham Forest striker Ishmael Miller and Major Henry Kelly, who was awarded the Victoria Cross for his action in the First World War. 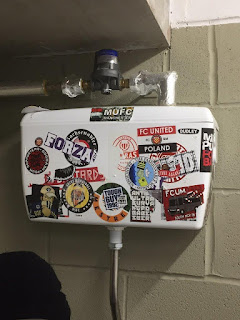 The ground is a five-minute stroll up the road. I nearly fall arse over tit on an icy patch on the pavement as I approach the stadium. I'm only saved by the sturdy grip of my Adidas Sambas. Broadhurst Park is bathed in glorious sunshine and already a hive of activity an hour before kick-off. After taking a few snaps, I pay £10 on the gate (a sensible price, compared to the rip-off at some National League North grounds). The programme is £2 and is, without doubt, the best of the season.

F.C. United of Manchester is a semi-professional club based in Moston, Manchester. They were founded in 2005 by disenchanted Manchester United fans opposed to the takeover of the club by American businessman Malcolm Glazer. After sharing multiple stadia across the Greater Manchester region between 2005-2015, they finally opened their own ground, Broadhurst Park in May 2015. 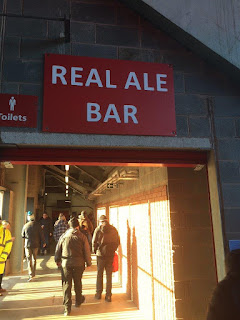 F.C. United of Manchester are a fan-owned club which is democratically run by members who have equal voting rights and own one share each in the club. The club badge is based on the Manchester coat of arms and features a ship at sea and three stripes for the three rivers that run through the city. Karl Marginson was the manager for over twelve years, until recently parting company with the club.

I'm taken aback at the huge amount of flags erected in each stand. As new builds go, the ground is a beauty with no stone unturned. It's the little things like the recycling stations and real ale bar that catch my eye. 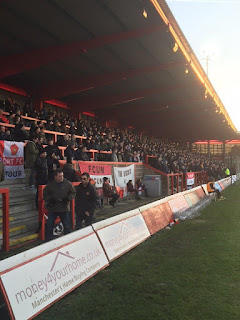 The DJs up in Manchester on the Non-League scene take pride in their pre-match set. I had expected a few Mancunian toons. There's little evidence of this, but the set is still stunning: Divine Comedy, The Members, Shed Seven and The Ruts get my feet tapping and my blood circulating on a bitterly cold day.

I'm leaning on a red-painted crash barrier towards the rear of the St Mary's Road End as the ground begins to fill up. Five minutes before kick off the crowd begin to sing relentlessly 'Bring on United' until both teams emerge from the tunnel. 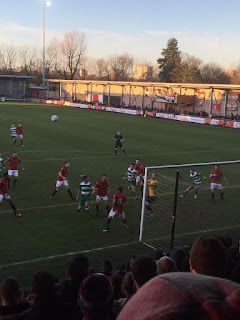 FCUM fans go through their full repertoire of songs that made me chuckle at Sporting Khalsa in an FA Cup tie a few seasons ago. The anti-Glazer and Sky references to the tune of 'Anarchy in the UK' by the Sex Pistols are sung with venom.  I'm still laughing at an F.C. United tweet from their official account to Gary Neville, co-owner of Salford City, after a last-gasp goal had beaten their rivals on Boxing Day. It simply said "U ok Hun? x"

Player-manager, Tom Greaves, soon has the majority of an astonishing 2,863 crowd in raptures with a cool finish on twelve minutes. The fans poke fun at the Main Stand for not singing, but they're soon at it. Southport play ball to feet and are dangerous down the flanks, but nobody can get on the end of some crosses whipped in, that flash across goal. They are managed by former Bolton Wanderers and Blackburn Rovers striker Kevin Davies. 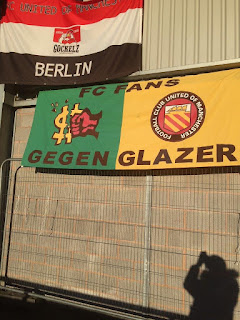 Around 200 fans are in attendance from F.C. Magdeburg in Germany. They were at Wrexham yesterday and are at the Macron Stadium on Monday evening when their team play a friendly against Bolton. FCUM turn off the music and allow them to sing at the break. I grab a can of Coke and a Bounty bar and stand at ground level next to some German lads.

The second half is scrappy and littered with fouls. Southport have to open up, but leave gaping holes at the back that FCUM try to exploit. The visitors do have the game's best player in 4 jacket David Morgan. The Belfast-born, former Nottingham Forest and Ilkeston Town midfielder prises open the home defence on countless occasions, but they fail to capitalise on his pinpoint passing. FCUM run the clock down to continue their good form under Greaves and climb up the table.

Man of the Match: David Morgan
Posted by Sticky at 7:03 PM

Nice report mate.
Please don't say you travelled from Keyworth to Broadhurst Park. If so we could have given you a lift.

Live in Carlton now. Do I know you? And thanks for reading the blog. Cheers Sticky

I donlt think you know me. If you were the guy in the County hat I didn't recognise you. (PS its Barm/Muffin not Cob if you're in Manchester...we bicker like hell over the issue!

Great, honest report. Thanks for your visit and as with all, you're welcome anytime. Oh, and it's a muffin!!

I have followed your meanderings for the last three years and absolutely love reading your reports.

I myself have been involved in the professional game for over 20 years now, but have never forgotten my roots and the memories/pleasure/pain that it produced!

Keep up the good work!

Thanks for all the comments, really appreciated. Great to know that people read this waffle. Going against the grain this Saturday, for Huddersfield Town v West Ham. Hope it's not 0-0!

Up the Imps
Sticky

Another good post. I was there and can verify the accuracy. That's a compliment. We call it a barm if it was a flat bread, cobs & rolls are small lumpy things for dunking in soup.