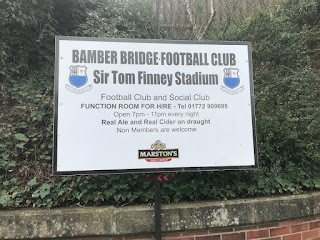 I've thrown myself full tilt back into the groundhopping scene. Last weekend Ms Moon and I spent a pleasant day out in Northamptonshire. It's a county we've explored a lot over the past few years, and very underrated it is too. It has some lovely picture postcard villages, one of which is Brixworth, where we dined at the 18th Century thatch-roofed Coach and Horses, before taking in Burton Park Wanderers v Long Buckby AFC in the UCL Div One. Latimer Park is ground-shared with Southern Premier League giants Kettering Town. Burton Park blew away the visitors 4-0.

We were back in Notts for 6:15. There was time for a quick wash, change of clothes before taking a short taxi ride into the city centre. I sank a pint of Infinity from the Blue Monkey Brewery in the recently refurbished Lillie Langtry's on South Sherwood St. We wandered across the road to the Royal Concert Hall where 70s rock band 10CC, formed in Stockport, played a stunning set. It's sad that Godley, Creme and Eric Stewart are no longer in the band, but nonetheless, they were bloody brilliant. Sticky's favourite track of the night was 'I'm Mandy Fly Me. Yes, I love my indy bands, but 10CC reminds me of a very happy childhood.

It's late afternoon on Tuesday, March 5th and I'm driving through the village of Tollerton, in south Notts. I glance to my left as a low flying aircraft emerges from the clouds and prepares to land at Nottingham City Airport. I park up outside Ives and Co Solicitors, in Plumtree. A tall, pale man saunters down Church Hill and crosses the road. He opens the back passenger side door of my car and throws in his hat and coat. It's a month since I last saw a game with The Taxman. That was a nine-goal ripsnorter of a tie in the Notts Senior Cup between Clifton AW and Gedling Miners' Welfare. 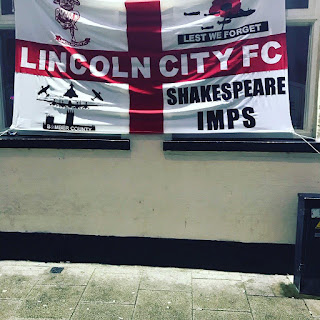 There are the usual tales of woe from The Taxman which include the patchy form of Nottingham Forest, where he has been a season ticket holder for the last 50 years, as well as the aches and pains caused by a day painting skirting boards in the house he is renovating - it's like something out of Grand Designs. I'll check the car seat later for any speckles of paint and invoice him accordingly.

It's a steady ride down the A52 through Grantham and into the flat, marshy land of Lincolnshire. It's a proper treat for the Taxman tonight, not only will he be sitting down for a chippy tea at the 100-year-old Tate's Fish and Chip Restaurant in Boston town centre, but he'll also be ticking off the wonderful, old York Street ground that belongs, for the time being, to National League North side Boston Utd.

Table-topping Stockport County and their large following (263 - 236 mile-round trip) are housed in a stand to our left. They are noisy, rowdy and in good voice. 6,311 rocked up at Edgeley Park on Saturday - It was a League record attendance. for the sixth division. The Hatters of Stockport win the game handsomely 3-1, following some ruthless and clinical finishing. 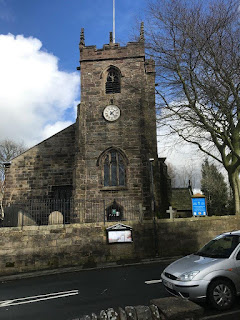 It's a less than happy journey back into Lincolnshire on Friday evening. There's a bad smash on the A46. Newark is gridlocked; traffic is diverted to the east of the town. I end up driving through the village of Stapleford, before having to cross four lanes of rush hour traffic to rejoin the A46 at Norton Disney.

Hell's teeth Carruthers, it's taken me two hours to make the 35-mile journey to Lincoln. I peg it up the High Street, over the railway bridge, as the crossing gates are closed, and up that chuffing Steep Hill. I'm fagged out folks, as I turn right at the White Hart Hotel and pull open the front door of BeerHeadZ just off Bailgate. A cheery barman recommends a Citra pale ale, which is dispatched down the hatch in ten minutes flat. I head down that bloody hill again, taking time for a pit stop at Hunters Fish and Chips for a Pukka pie and mushy peas. I plonk myself down in the Stacey West Stand (named after two Lincoln supporters who tragically lost their lives at the Bradford Fire Disaster in 1985).

Yeovil Town and their small band of supporters have made the 400 mile-round trip to Sincil Bank this evening. I saw them tonk Kevin Nolan's Notts County 4-0 at Meadow Lane earlier in the season, but just like the Pies, the Glovers are in big trouble now, too. 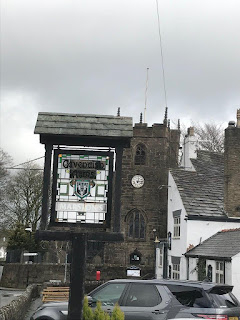 'The Lincoln' have been limping over the line of late, but incredibly are still unbeaten in their last 13 League games. I was unimpressed last week when I saw a 96th minute Big John Akinde goal earn them a fortunate point, in my opinion, versus Exeter City.

Yeovil prove to be no pushover and enjoy plenty of possession. City win the game following a brilliantly executed cross by mercurial winger Harry Anderson, which is headed home by the impressive Mark O'Hara, on loan from Peterborough United. The drive home is so much sweeter with three points in the bag, with the pressure firmly back on Bury and 'Dirty Mansfield.' 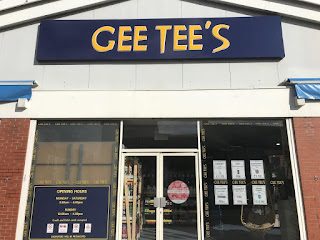 I have a fitful night's sleep which I can only put down to demolishing a bag of Haribos at the match. The game is confirmed as ON by Bamber Bridge's excellent twitter feed. Ms Moon asks whether we''re going celebrity grave hunting. I'm still seething that we spent the night in Ross-on-Wye totally unaware that the 'Queen of Crossroads' 'Meg Richardson' (Noele Gordon) and playwright, Dennis Potter (stayed the night at our house once, true story) were laid to rest in the local churchyard.

Ms Moon can be a nasty pants without her coffee fix, so first port of call is the Esso garage in Clifton for a Costa latte. I have to put up with Graham Norton on the car radio, although he does play the superb The Love I Lost, by Harold Melvin and the Blue Notes, which was one of the tracks on Johnny Owen's jaw-dropping Nottingham Forest documentary 'I Believe in Miracles.' 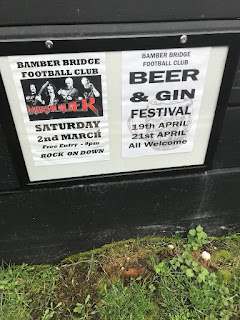 The M6 is a breeze at this time of day. We are soon rolling into the Cavendish Arms, in the Lancashire village of Brindle, with St James' Church providing a beautiful backdrop. The barman pulls a nice drop of ale. Lunch is disappointing; we both choose homemade pies, as after all, it is National Pie Week. Sadly both aren't piping hot and the chips arrive well after with profuse apologies by our server - I still tip the lad a couple of quid, as he looks stressed out.

We take a stroll down the High Street in Bamber Bridge town centre, but to be honest, nowt is going off. Ms Moon hoodwinks me to going into some 'department store' to see if they have any footstools. The shop reminds me of Reginald Perrin's GROT store; it's full of valueless items sold at extortionate prices. 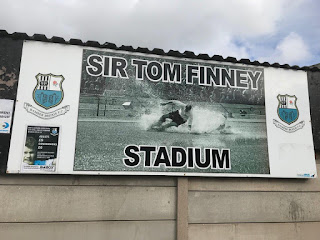 Bamber Bridge or The Brig as they are known were formed in 1974. Their record attendance is 2,300 for a friendly versus the Czech national squad who were using their ground as a training camp for Euro 96. Former Preston North End and Nottingham Forest tenacious midfielder, Paul McKenna, has played for the club. McKenna does some brilliant impersonations and tells amusing anecdotes on the Undr the Cosh podcast - it's well worth checking out (thanks for the tip Barthez). 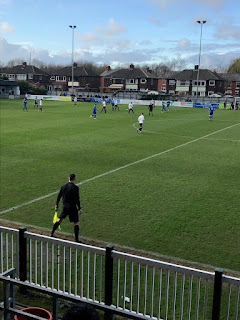 It's £9 each on the gate and £1,50 for a cracking programme. Ms Moon buys some raffle tickets from a chatty lady. There's a real community feel about the place. The ground is a little belter. The two-tiered clubhouse, bar and club shop are behind the nearest goal, with the Gerry Lawson Stand (named in the memory of a former club stalwart) running up the right-hand touchline. There's a low roofed, covered terrace behind the far goal and an open standing area to the back of the dugouts.

I'm not sure whether it's Dave Pearce, Judge Jules or Danny Rampling on the decks. The chap is banging out an unbelievable set of dance/trance toons from the late 90s early noughties. We sit in the stand to start with, to keep out of the howling, bitterly cold wind, but are soon on the move as some young kids are causing havoc dashing about - guessing they're fuelled with Haribos. The Whitby coaching staff are furious with the sluggish start their team have made, following their 140-mile coach journey. 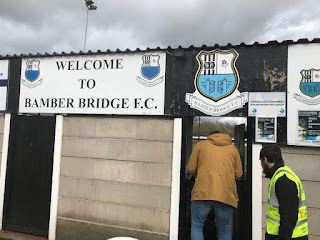 A youthful-looking Brig side are running the legs off the visitors. They take a deserved lead on five minutes through an Alistair Waddecar header following a whipped in free kick by Matt Dudley. The dangerous Regan Linney sees an effort go agonisingly the wrong side of the post. Whitby get lucky minutes from half-time, although the move is sublime and the finish exquisite from Bradley Fewster.

'May's Place' is doing a brisk, roaring trade in hot food, coffee and Yorkshire Tea. We're back in the Gerry Lawson Stand, nearest to the end Whitby will attack. I expect The Seasiders to push on after seeing my earlier 3-0 score prediction blown out of the water after five minutes play. 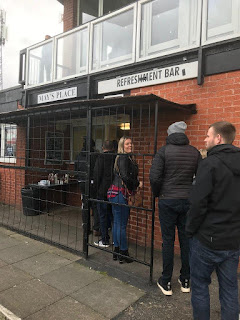 The Brig huff and puff but can't blow the Whitby defence down. The visitors take the lead on 75 minutes with the Brig failing to clear their lines. A thumping finish from Fewster on 85 minutes ensures a happy journey home to North Yorkshire. I hope their coach driver hasn't blocked us in.

Man of the Match: Ms Moon for putting up with me this week.
Posted by Sticky at 7:07 PM