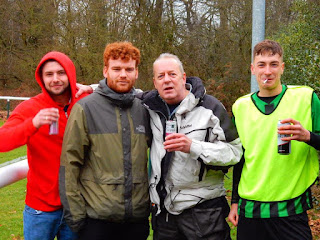 We're feeling pretty pleased with ourselves. Chris Thompson and I took over the running of the 'Keyworth Baby Squad in early October, with the team languishing in the nether regions of Division Two in the Notts Senior League. The lads weren't enjoying their football one iota. In the last 15 games, we have won 10, drawn 2 and lost 3, scoring 60 times and conceding 23 goals, having shipped 50 goals in the first 9 games.

The lads are full of beans having banged in 19 goals in their last two outings. Training is fun, with 90% of the squad attending each week. I really miss my groundhopping, but I'm loving my time with the young guns, and have no plans to retire just yet. 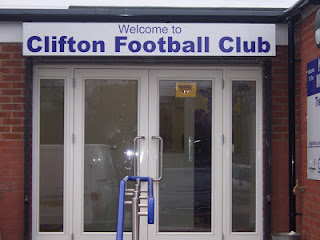 It's Tuesday evening and I'm hurtling down the Nottingham ring road towards the village of Ruddington where 'Our Joe' lives. His brother ('The Keyworth Georgie Best') is on a 12-day bender in Lanzarote. Joe and I have a chippy tea at the Ruddington Fish Bar, on Church Lane, before making the short journey down Green Lane to watch the World famous Clifton All Whites versus one of Sticky's other favourites, Gedling Miners' Welfare.

I scratch my head, Stan Laurel style, as I work out who I'd like to win this Notts Senior Cup tie. Both clubs are dear to my heart, with quality fish 'n chip shops close to both stadia. 'Our Joe' has played at junior and senior level for All Whites. He talks fondly of the time they won the Midland League Cup at Telford United's New Bucks Head ground. I'm really hoping he comes back home to Nottingham, after finishing his degree at university. It would be great to get him back on the pitch, playing 'ball again.

The two teams serve up a classic cup tie encounter. The Miners' are 1-0 up within 40 seconds. With the score being 4-2 to All Whites at half time, many in the crowd feel the game is over. Not Sticky though, as I know Jack Jepson always has a goal in him. I mention to CAW manager James 'Tosh' Turner at the break that they only have to mark one player out of the game - to be honest I'd double mark him, that's how dangerous the boy is. 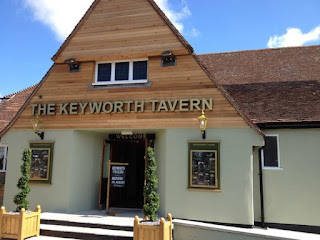 Clifton fail to heed that warning, with Jepson bagging inside sixty seconds of the restart. Luke Smith restores parity on 52 minutes. Jepson misses a penalty that would have seen them clinch the tie. In extra time Liam Corrigan's header puts the Miners' into the quarter-finals after 120 minutes of breathtaking football. It's great to see Gedling manager Chris Marks back in the dugout and enjoying his football again. I can barely feel my toes as I head back to the car. Captain Scott wouldn't have survived tonight's Arctic conditions.

It's bitterly cold on Wednesday evening as 22 lads rock up for training at South Notts Academy in Radcliffe On Trent. The Club is in a good place right now, with both teams going into Saturday on the back of long unbeaten runs. It's absolutely freezing with the 3G white over with frost. The lads have a good warm up before going into a game - I don't want folk standing around getting cold waiting to do drills. 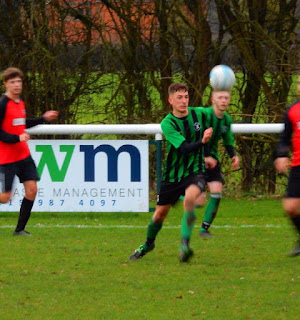 I've had a cracking week at work, and have proper brought home the bacon. A big deal lands on Thursday. It spurs me on to book a cruise with Royal Caribbean to celebrate Ms Moon's up and coming 50th birthday. It's done and dusted in a 15-minute phone call. Barcelona, Cannes, Monte Carlo, Florence, Pisa, Rome, Athens, Santorini, Mykonos and Valetta, here we come. I'm feeling rather chipper, as I'm in Budapest for four nights, with the lads, in June, with the annual jolly boys outing to Tenerife in November - I really can't 'arf pick em.

It's Friday evening and I'm driving up 'Millionaire's Row' in the village of Keyworth. I swing the car into a large drive with wrought iron gates. Tommo lines up the 'Gin Palace'. I have three large Whitley Parma Violet gins, neatly decorated with blueberries and raspberries. I get tonked at table tennis by Tommo and 'Lord Geoffrey' before heading down the Keyworth Tavern for the Arsenal v Manchester United FA Cup tie. 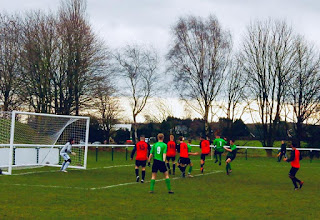 I'd secretly hoped to catch some of the 'Baby Squadron' out having a few scoops, but the word on the street is that they're all tucked up, having an early night, ready for the game tomorrow - they're probably all in town, where I can't hunt them all down.

They've finally got a landlord at the Tav' who understands beer and looks after his ales. He has a splendid drop of Moonshine ale on as a guest ale from the Abbeydale Brewery in Sheffield. Six pints later and I'm collapsing onto Lord Geoffrey's couch, with a cup of tea for company, watching England's demise in the First Test in Barbados.

I feel as rough as a badger's arse in the morning. The Big Man is there for me, in my hour of need. He invites me around his crib for a full English. It's just what the doctor's ordered. I wash it down with a mug of tea. I'll see the Big Man later up at Ravenshead, as he loves watching the homegrown youngsters play. I bump into Fod, Lou, Trumpy Bolton and Jayne. They are en route to Ravenshead to go on the sauce and support the lads too. I immediately phone every pub in Ravenshead to ensure fresh barrels are put on. 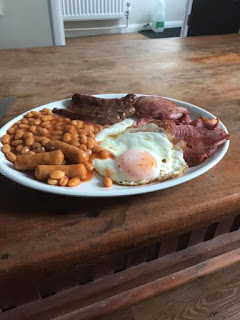 Crikey Moses, I've still got last night's clothes on; what a tramp. I grab a quick shower, pack the kit, blow up the balls and fill up the water bottles before jumping back in the car and heading up the A60. I roll into the Ravenshead Leisure Centre car park at 12:45pm. Ravenshead is a village in Nottinghamshire with a population of 5,600. It borders Papplewick, Blidworth and Newstead - it's situated close to Sherwood Forest.

The lads start to arrive in a convoy of cars. They've all got smiles on their faces and can't wait to get in the changing room so they can bang some toons out of the sound system. 'Sizzers' always puts on London Grime artist Cadet, as he thinks I like him. It would break his heart if he found out that I think he's pants. 'Lose Yourself to Dance' by French electronic duo Daft Punk is song of the day - well done 'Sizzers.' 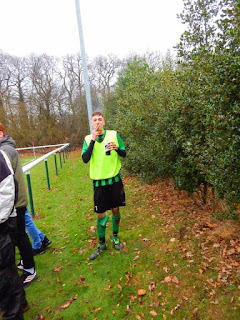 'Brain of Britain', 'The Keyworth Georgie Best' is bragging to the lads of 12-hour benders and how he's smoked his way through 500 fags in Lanzarote. The clown has also bought a brand new pair of white boots with him. They last all of ten minutes in the warm-up, as he complains of emerging blisters. I've given him a start today so he can blow away the cobwebs - five goals in his last three outings, with a much-improved attitude, sees the No.7 shirt returned to him.

I give the lads a pep talk out on the pitch ten minutes before kick off, warning them of the pitfalls of playing a side they beat 7-0 in the reverse fixture. It was only last week that Ravenshead gained a valuable point away at AFC Clifton on the adjacent pitch to where we were playing. They have our upmost respect. 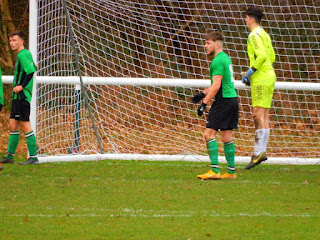 We are being refereed by a young lady who comes from Melton Mowbray. She addresses the lads before the game, explaining what behaviour is expected of them. Hats off to her, it's the first referee that has the courtesy to do this with the lads. I ask her if she supports Leicester City. She replies in the affirmative. The lads start booing  ... lol.

Talking of Leicester I see in the distance Trumpy Bolton. He's crying a river of tears after being told there are no licensed premises in the leisure centre. The Big Man ferries him down to a Shell garage so he can stock up on Strongbow Dark Fruits. 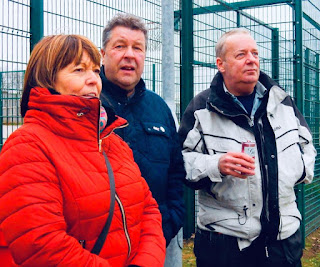 We start off like a train and are soon into the groove. The link-up play and passing is a joy to behold. But we often need an early goal to help us settle down and build confidence; today it doesn't come. 'Woods' and 'Cal' are telepathic with their passing. Ollie ('The Keyworth Peter Beardsley') skies a shot over the bar from close range. He was offended by the PB nickname when he looked him up on Google images. I cheered him up though when I suggested he looked at footage of Beardsley's feet and running style on YouTube.

Ravenshead are a physical team, but play within the laws of the game. My lad isn't getting much joy out of their left-back, Josh Brentnall, who is as hard as nails and rapid over the ground. It's 0-0 at the break - Sticky Palms doesn't do 0-0s. I tell the lads to stay calm, collective and together, the goal will come if we are patient.

'Ravo' came more into the game at the fag end of the first half. We are in debt to our 'keeper 'Shirty' who has made some fantastic saves. We don't start the second half very well. I make a quick change on ten minutes, as I can smell a goal for the home side in the air. 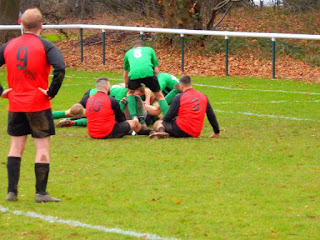 The game is getting scrappy and disjointed and is heading for a goalless draw. 'The Keyworth Georgie Best' was hooked on 65 minutes, blowing out of his backside. His replacement Shyan is giving Brentnall a run for his money, with his pace and strength.

You can never rule out our talisman and resident DJ 'Sizzers.' Only minutes after being upended in the box, and having a stonewall penalty turned down, he picks up the ball, twists, turns and dances his way through the defence before firing home a left-foot shot that nestles in the right-hand corner of the net. I punch the air in delight and relief and hug one of my subs. The lads have a massive pile on. 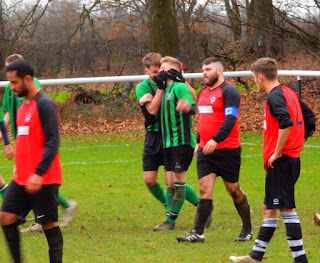 We see out the last few minutes superbly. Neil Diamond is cranked up in the changing room as the lads sing their hearts out. Our attitude and effort has been spot on. We've ground out a victory which is far more important to me than any 9-0 or 10-0 win.

Ravenshead have put a shift in. They've also been good hosts too. We all meet for a drink together at the Sherwood Ranger and watch the results come in on Soccer Saturday.

Man of the Match awarded by the Opposition: Callum Barratt

Thanks to Louise Dixon Photography for the images x