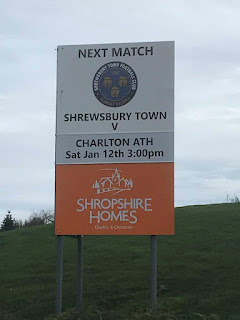 It's Saturday 5th January 2019. I'm stood in the technical area at Keyworth United's Platt Lane ground, encouraging and cajoling my young team, as the excellent referee, John Sansum blows the final whistle. My team full of teenagers and local lads have defeated their opponents 9-0. It was only three months ago that our match was abandoned against the same team, on 86 minutes, following a serious injury to our brilliant 16-year-old winger - we were 3-2 down at the time. I'm as pleased as punch with our progress, as I scurry across the pitch in the direction of our goalkeeper, who has been outstanding for the team today.

Back in the changing room 'we' (the lads) crank up the toons. Clapham-born British grime artist Cadet booms out of Sticky junior's' sound system. I enquire as to whether it's 50 Cent and get shot down in flames. The celebrations continue in the clubhouse with close friends of mine who have come down to support and some parents of the 'Baby Squad.' The 'Keyworth Georgie Best' is potting a few pints and furiously smoking his way through a packet of Mayfair cigarettes. I have my one pint of Guinness before leaving the team to celebrate long into the night. I hear Neil Diamond's Sweet Caroline being sung by the lads as I head out to my car. My son has bagged a hat-trick, and for that, I have to thank my mate Chris Thompson, who has mentored 'Georgie' over recent weeks. It's never an easy relationship between Dad and Lad, when father manages the team.

Tuesday evening is spent down at Green Lane, home to the famous Clifton All Whites, whose alumni include: Jermaine Jenas, Jermaine Pennant and Darren Huckerby. I've The Taxman for company. We spent a pleasant hour or so at tea time in the Packe Arms on the A60, just a few miles outside Loughborough town centre. Kimberley Miners' Welfare are tonight's visitors. I have a quick chat with KMW legendary secretary Stephen Hobster, before viewing the first half proceedings. The game is played at a face pace. Former Mansfield Town, Sheffield Utd and Blackburn Rovers midfielder, Lee Williamson, is strutting his stuff in the 'Kimbo' midfield. It's 0-0 at the break. The Taxman says he can smell a stalemate - Sticky's slightly more chipper and optimistic than that. 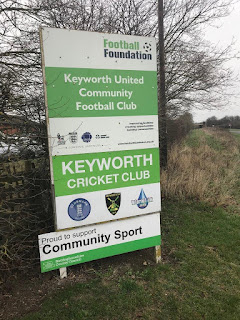 I catch up with a few Clifton folk at the break. My youngest lad played for the Under 19s for a few seasons, so it's a club that I hold dear to my heart. One of my all-time favourite characters on the Non-League scene, James 'Tosh' Turner is striding towards us. 'Tosh' always makes us feel welcome and is grinning from ear to ear. I predict that the final score will be 1-1 as he hurries off into the direction of the dugout.

The second half is scrappy and disjointed. The KMW bench get angry with the referee, quite why, I don't really know, as it's Clifton who are reduced to ten men after a wild challenge is deemed a red card. Incredibly, Clifton take the lead on 88 minutes, only to be pegged back deep into stoppage time. I'll collect my correct score winnings off Lord Turner of West Bridgford the next time I see him.

Thursday night is the highlight of the week (sorry Tosh). I'm drumming my fingers on the coffee table contemplating what to do next when I hear a familiar tune strike up on BBC One. It's Series 8 of the popular light entertainment show Death in Paradise. My old budgie Murphy Palmer used to love whistling the theme tune - God rest his soul. I end the evening watching a few re-runs of the cult BBC Two situation comedy Early Doors -"crime won't crack itself." 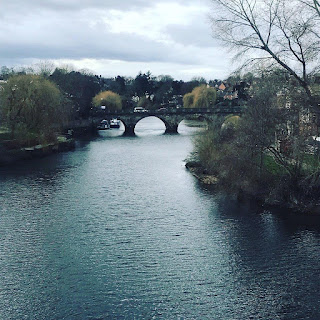 On Friday tea time I meet Ms Moon for a swift one in The Free Man on Carlton Hill, before moving onto the Lincoln Green run Brickyard. We settle in for the evening, with a long day lying ahead tomorrow.

We're on the road by 10:am. I see a Nottingham City bus advertising the Capital FM Breakfast Show. They play the same six records all day, on this excuse of a radio station. One of them is 'Don't You Worry Child' by Swedish House Mafia - I've written better lyrics on the toilet. If I find out that any of the football team, I manage, listen to Capital, I'll boot them out of the team!

We drive past the oldest Football League club in the World (Notts County). They have a massive six-pointer versus Colin Calderwood's Cambridge United today. God help them if they lose, as it will edge them closer to the trap door and into the murky waters of the Conference. 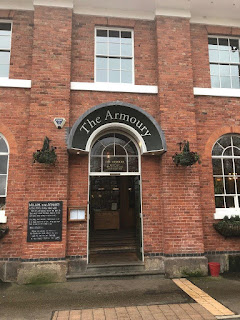 Sat Nav takes us down the M42, M6 and M54. Trumpy Bolton's favourite DJ, Graham Norton, is on flames today. He gets my toe tapping to 'Get Out of Your Lazy Bed', by Brighton-based Latin flavoured jazz band Matt Bianco.

I've booked us into a snazzy boutique hotel called Darwin's Kitchen, and have managed to negotiate a £30 discount - all that sales training hasn't gone to waste. We check-in before heading to a riverside pub called The Armoury that was recommended by 'Our Kid.' It doesn't disappoint as we both get stuck into a rump steak sandwich. Mine is accompanied by a superb pint of pale ale from the Salopian Brewery.

We take a stroll down the banks of the River Severn in an effort to walk off lunch. We jump into a taxi to save the hassle of catching a bus. The ground is a good hour's walk away from the town centre. 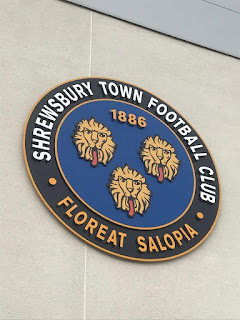 Shrewsbury is the county town of Shropshire, with a population of just over 70,000. It lies on the River Severn and has over 600 listed buildings. It suffered very little from bombings in the Second World War, so many of its medieval buildings remain intact. Notable people born in Shrewsbury include the biologist and evolutionary thinker Charles Darwin, Burnley and England 'keeper Joe Hart, Sheffield Wednesday and Scotland striker Steven Fletcher, the golfer Sandy Lyle who is a former British Open champion and US Masters winner. The broadcaster and gardener Percy Thrower used to live in the town.

Shrewsbury Town Football Club were formed in 1886. For 97 years they were based at their Gay Meadow ground, on the banks of the River Severn. Notable former players include: David Moyes, Nigel Pearson, David Pleat, John McGinlay and Neville Southall. 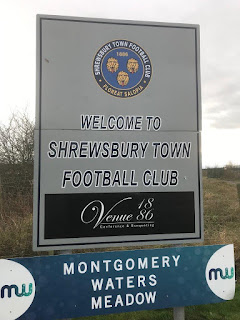 I collect our tickets and wander around the perimeter of the ground taking a few snaps whilst Ms Moon slopes off to Starbucks for another latte. It's £20 to enter the West Stand and £3 for a programme. The out-of-town Montgomery Waters Meadow Stadium lacks character. It reminds me of so many of the new builds such as Colchester United.

Ms Moon and I are as snug as a bug in rug on the back row of the stand out of the swirling wind. The Shrews are hovering in the nether regions of League One, and have, in my opinion, taken the harsh decision to sack John Askey. Relative novice Sam Ricketts has been swiftly recruited from nearby Wrexham.

High-flying Charlton are managed by Lee Bowyer. They have two of the hottest strikers in the League, in Lyle Taylor and Karlan Grant. The game has a brilliant ebb and flow about it, which is particularly pleasing on the eye for the neutral supporter. I'm sat next to a lovely, old, knowledgable gentleman, who gives me the heads up on Shrewsbury. 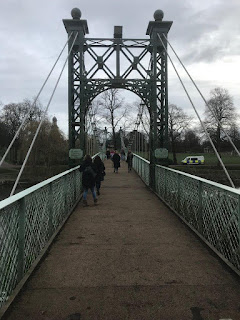 Charlton are electric going forward and have an end product, as well as pulling the Shrews' central defenders out of position. The lively ex AFC Wimbledon striker Lyle Taylor (was with Danny Cowley at Concord Rangers) puts them 1-0 up from a corner.

The Addicks are kept at bay by a virtuoso performance by Shrewsbury 'keeper Steve Arnold. Darren Pratley seizes on a mistake by former Lincoln City skipper Luke Waterfall, before smashing a shot into the top corner of the net. The industrious Grant dusts himself down, after being felled in the penalty area, to strike home the spot-kick and finally put the game to bed.

We exit the ground with five minutes remaining as we have a taxi booked so we can enjoy a few drinky poos in the town centre.

Man of the Match: Steve Arnold and Matt Bianco
Posted by Sticky at 8:09 PM