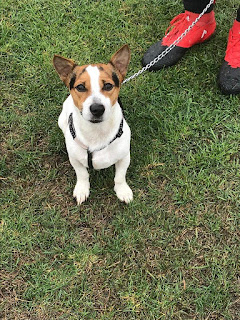 The trip back home from Wrexham is a darn sight quicker than this morning's hard slog - Ms Moon handles the car like she's a competitor in the RAC Rally. I'm soon slurping a few sherbets in one of my favourite haunts, a Flipside tap called the Old Volunteer, on Burton Road, Carlton at just gone seven bells. I arrive back at HQ just in time to see Graeme Swann score some low marks in Strictly Come Dancing. I'm fuming folks, I've had 50p on the former England and Notts off-spinner at odds of 25/1 to win the competition. Craig, in particular, is scathing of Swanny's hips.

I put my headphones on as Ms Moon catches up with Bodyguard; everyone's chuffing talking about it. I shed a little tear as 'Troublemaker' by Olly Murs appears on the YouTube shuffle. Murphy Palmer my old budgie, used to whistle his wee head off to that tune. He never liked the bit where Flo Ryder starts singing in riddles - he only had ears for Murs.

On Sunday, after a morning's graft in the garden, I saunter down to the bus stop on Carlton Road and head up into town. I alight the bus opposite Nottingham Arena, before crossing over London Road and pegging it up towards the railway station. There's a lovely little pub, licensed for 36 people, called the BeerHeadZ at the Cabman's Shelter, on Queens Road. Next port of call is Castle Rock's VAT and Fiddle, an open plan 1930s brick pub on Queensbridge Road. I was going to risk the wrath of the good lady by potting a third pint at the Barley Twist on Carrington Street, but the place is closed on a Sunday. 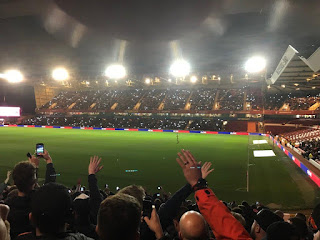 Tuesday is spent up at Kimberley Miners' Welfare's Stag Ground, where table-topping Selston FC are the visitors. The Taxman and Johnny Buttery are also in attendance. We witness a poor game, with plenty of huff and puff from both dugouts and loads of 'handbags.' Priory Celtic legend John Harris wanders over at half-time with his wife and daughter, who I 'accidentally' blanked when I arrived at the ground earlier. I get a good telling off - sorry Jackie and Lucy. The game ends in a 1-1 draw.

Wednesday evening is the highlight of the week. I'm loitering outside the Nottingham Forest ticket office, having, a few days earlier, snapped up a couple of tickets at £20 a pop to sit in the notorious 'A' Block in the Peter Taylor Stand; my favourite area of the ground, where you can hear boot on leather and the players shouting. A pumped-up Sticky jnr has a quick jar in the Hubble Bubble bar just around the corner on Pavilion Road, before hooking up with Dad.

We bump into East Midlands Today sports reporter Angela Rafferty who is hanging around with a camera crew outside the turnstile. Angela's husband, Johnny Haslam, is a good friend of mine and an 'A' Block diehard. 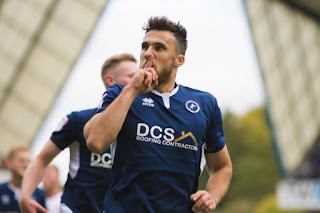 We're sat in the ground (stood actually, as you do) half an hour before kick-off because Dad likes to watch the warm-ups, see the crowd file in and listen to the tunes on the PA system. The Forest DJ loves his alternative music. He plays snippets of 'Gangsters' by The Specials and 'I'm Free' by The Soup Dragons.

Millwall, tonight's visitors, have had somewhat of a rough ride this season, which finds them languishing in nether regions of the Championship. The atmosphere is terrific in the 'Main Stand' as I like to call it. The Forest faithful sing a little ditty about manager Aitor Karanka to the theme tune of Heartbeat. It goes on for about 15 minutes and makes me chuckle. How Millwall aren't 3-0 up in the first 20 minutes, Lord only knows, as the Tricky Trees have no answer to the Lions' aerial bombardment.

Sticky's favourite Championship striker is Millwall's Lee Gregory. I've always had a soft spot for him since I saw him playing for Staveley Miners' Welfare up at Borrowash Victoria in 2008, whilst on loan from Sheffield FC. I stood chatting with Lee's Dad at that game, aghast at why he was playing at such a low level when it was clear to see that he had all the right tools for the job. I phoned a well known and respected Midlands Non-League manager after the game to tip him the wink. His reply was "Nick, if he can't get in Sheffield FC's side, what chance has he got in getting in mine?" In 2011 Millwall paid Halifax £250,000 for his services. 57 goals in 146 appearances is a great return on investment. Gregory sees a header bounce off the bar in the opening minutes of the game. 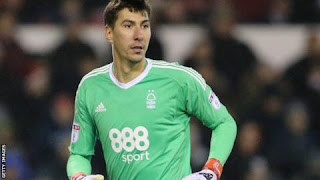 Livewire, Joe Lolley, puts Forest ahead with a low shot that nestles into the bottom corner of the net. Everything is going to plan until with 25 minutes remaining some of the floodlights go out."We'll play in the dark" rings out from the 'A' Block. The players return after a short break with the result a formality after a 25-yard free-kick from a largely anonymous Joao Carvalho crosses the line after hitting the underside of the bar.

Neil Harris throws on a few subs, with Karanka slow to react to the visitor's aerial supremacy. Romanian 'keeper Costel Pantilimon is having a 'Weston Super Nightmare.' His kicking has been skew-whiff and his distribution, in general, is appalling. He hesitates as a cross is swung in for an alert Shaun Williams to head home. Michael Dawson is thrown on to soak up the pressure and win a few headers; he performs heroically. One final ball is driven in from the left for poacher Lee Gregory to stab home at the far post. Sticky jnr boots the seat in front of him before exiting the ground - he best be fit for Saturday. 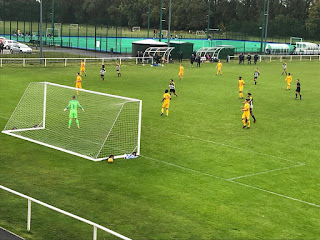 I'm desperately trying to get a large deal over the line at work in time for the weekend. I inch towards it as I have my hair cut at a.j.richardson just off Mapperley Tops. It's a well cool barber that has 'I'm in Love With the German Filmstar' by The Passions piping out of the speakers on the Steve Lamacq Show on 6 Music. I share a drink with Ms Moon at the Woodthorpe Top before settling in for the evening.

There's a change of plan to the Saturday schedule. We were planning to travel up to Sheffield to watch Swallownest v Armthorpe Welfare (birthplace of Kevin Keegan). Duty calls to watch the 'Keyworth Georgie Best' aka Sticky jnr. He currently plays for the Keyworth Development team in the Notts Senior League. I have agreed with the club to run the side from January 2019 in an attempt to keep hold of the flowing production line of youngsters that the club produces. Don't worry, I'll still keep knocking the blogs out to report on junior's latest yellow card. 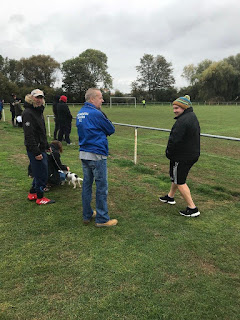 A busy day lies ahead. I have time for a couple of crumpets with smoked salmon (sell by date is today) smeared in horseradish sauce (weird I know). First port of call is the Highfield Sports Complex, just off University Boulevard. Notts County Under 18s are playing Preston North End. There are quite a few boys still playing that I've scouted over the years. A young Pies team concede two late goals, whilst chasing the game and end up losing 4-1.

My new team are playing Magdala Amateurs at the back of ROKO gym on Wilford Lane. It's a bolthole for blog legend 'The Big Man' who has just completed a ten-day tour of Scotland - think they call it NC500 - basically it's a 516-mile scenic route in his camper van. We catch up for coffee in the bar along with Fod and Lou, who have come to watch 'Sizzers' (Fod's lad). 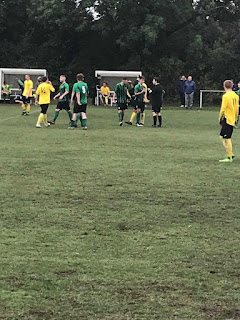 As we stroll towards the touchline my stomach begins to tighten and my heart starts thumping, just like it did four years ago when I coached the 16s and 18s in my final season. Today I'm just observing, as Chris Thompson has kindly stepped into the caretaker role until January.

Sticky jnr is captain (nowt to do with me) and looks fired-up. I immediately phone up Sky Bet to see what odds he is for a yellow card. Keyworth set about Magdala, refusing to be muscled off the ball by their older opponents. The Green Army survive an early onslaught and begin to settle into a rhythm. 16 year old Ben Antcliffe opens the scoring with a delicious curling shot that goes into the bottom corner of the net. Just after half-time Antcliffe becomes the creator supreme, setting up Tom Siswick to fire home from close range. 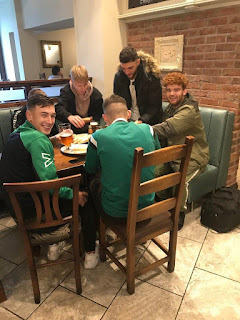 The team have conceded 50 goals in nine games, morale has been low in the camp. Statistics suggest they meet need another goal. Sadly they come thick and fast and at the wrong end. The third goal is a smart finish with our 'keeper stranded.

We're running out of legs, gas and air. Milo the Jack Russell has been told to warm up. The game is abandoned on 85 minutes with a horrific knee injury to the game's best player, young Ben, who is carted off to the Queens Medical Centre in the back of an ambulance. Get well soon, Son.

Our young guns retire to the Tailors Arms for a drink and some food with the opposition. The team-bonding has started. I can't wait for January 5th 2019, when the journey begins.

Man of the Match: Ben Antcliffe

Yellow Card for Sticky junior on 70 mins - Sky Bet refused to give me odds.

Gag of the day:

One for the kids there!
Posted by Sticky at 7:47 PM