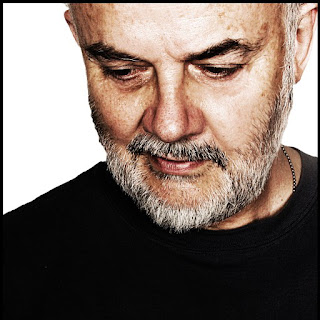 I'm absolutely out on my feet after returning to HQ from Chippenham, following a day out with blog legend Trumpy Bolton, watching a dull as dishwater FA Cup tie. Ms Moon is slouched on the sofa watching Strictly Come Dancing. I enquire as to whether former Notts and England cricketer Graeme Swann has put a shift in, as I have a vested interest, having placed two 50p each way bets at 25/1 and 40/1. Ms Moon says he's scored high marks again - I can't 'arf pick 'em.

We walk for an hour around Colwick Country Park, adjacent to Nottingham Racecourse, on a beautiful, autumnal Sunday morning. The leaves are changing colour; the setting is peaceful and tranquil until we bump into around 200 bleating Canadian Geese sat on the lake - I avoid these buggers like the plague, particularly when I'm cycling. 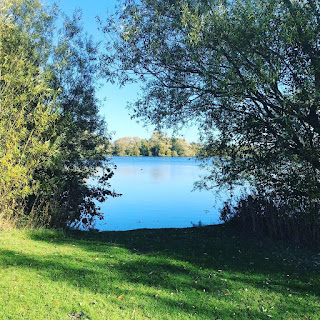 I exit the car on Weekday Cross and slip down a passageway next to the Ibis Hotel. I swing open the front door of the Herbert Kilpin and shout up a pint of Kilpin from the Black Iris Brewery. I watch the fag end of a seven-goal thriller in Serie A - Sticky doesn't do 0-0s. I pop into the Six Barrel Drafthouse on Carlton Street and the Fox and Grapes in Sneinton before settling in for the evening.

I have a daft £1 bet on Crystal Palace, Serbian international midfielder, Luka Milivojevic, to score the first goal of the game up at Goodison Park on Merseyside; he's at a juicy odds of 28/1. I'm proper cross six hours later when I see the blithering idiot fluff his spot-kick on Match of the Day. 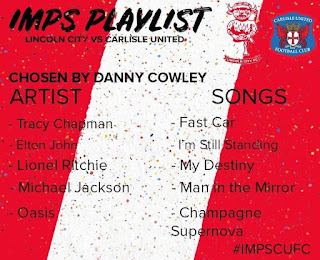 Monday is Lincoln manager Danny Cowley's 40th birthday. This living legend has turned our Club on its head with his younger brother, Nicky, and has brought back a feel-good-factor around the city not seen since the late great Keith Alexander was the manager of the Imps.

The Club have given Danny the honour of picking a playlist of his favourite tunes to be played before the clash with Carlisle United. Being a Cockney he's bound to have some Blur, The Jam and The Clash up his sleeve. I'm so excited about the sell-out game at Sincil Bank as I hurtle down the A46 on Tuesday tea-time. 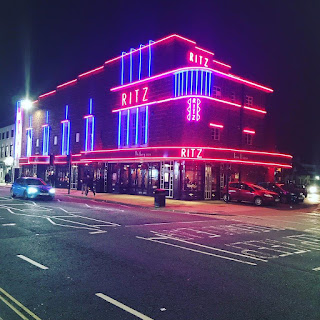 I park the 'Rolls Royce' at my lucky spot outside the old people's home on St Botolph's Crescent, where my Nana, Lucy, spent her last few years. I peg it up the High Street past the Ritz, where I'll have an all-nighter if we beat 'Dirty Mansfield' on November 24th. I slip down a walkway onto the Brayford Waterfront. I like having some pre-match pasta at ASK Italian, which is rammed full of Imps fans. As per normal, I'm one of the first folks to go through the turnstile at Sincil Bank just before 7pm. I sit high up at the back of the Selenity Stand, where I have no recollection of the last time I saw the Mighty Imps lose a game.

There's some strange music blasting out of the PA. Michael Jackson's 'Man in the Mirror' and Lionel Ritchie's 'Destiny.' I look at Lincoln's Twitter account and notice DC's playlist - blimey they were his picks, along with Elton John. Danny, are you sure you're only 40? 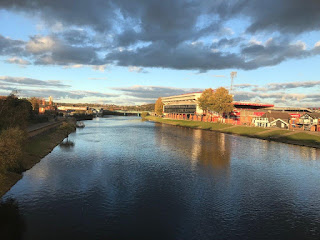 Tonight's visitors, Carlisle, have a makeshift central defender who usually plays as a striker and Steven Gerrard's cousin, Anthony Gerrard , playing as his partner. It's an exciting first half which ends 2-2. Carlisle are great value and have caused our defence some uncomfortable moments with their hassling, harrying and movement. The second half is a non-event with the game ending in a stalemate. Danny Cowley is furious at the end of match Press conference, not only at the sloppy defending but also that they were unable to water the pitch due to an internal cock up - I prefer to blame it on some of those song choices, Danny.

The highlight on Friday is a reduced 20p off a cheese and pickle sandwich at Tesco. I spend the early evening with 'The Keyworth Georgie Best' and 'Sizzers', the hottest property in the Notts Senior League. I've allowed them a night out - we haven't got a game tomorrow. We have some tea at the 'World renowned iconic Trent Bridge Inn' (a posh 'Spoons) in West Bridgford. I've got my 50p off CAMRA vouchers again and Liberation is a guest ale - it's a steal at £1.65 - you wouldn't get a Latte, Mocha or Flat White for a sniff of that down 'The Avenue', the coffee capital of Notts. We sink a few more at a refurbished Southbank Bar, before I'm very kindly dropped off at base camp by Sticky jnr's girlfriend, Alix. 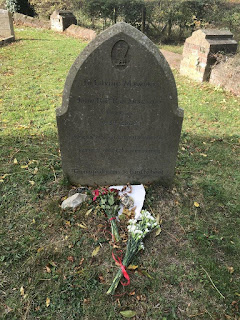 Blimey Charlie, I've got a banging head on Saturday morning. It was well worth it though, to spend some time with Sticky jnr. Ms Moon is off to Cheltenham at the weekend to help her daughter find some accommodation, as she has just landed a job as restaurant manager at The Botanist. I won't need any excuses to visit the Regency spa town and get the odd game in somewhere in the Cotswolds.

I'm off out to the Fens to pick up my best mate from school, 'Ackers' for a day out in Suffolk. He has legendary status in our village for being accident-prone and the worst driver since Maureen off Driving School. I pick him up in Thorpe Meadows, at the Peterborough Rowing Club, where he's enjoyed a few strokes on the water - I hope for the crew's sake he wasn't the cox or they might have ended up in The Wash. 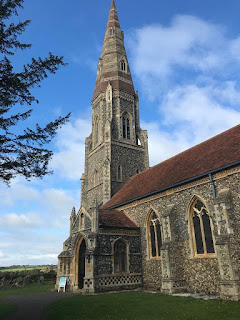 He's still dressed in his rowing gear as we head down the A14 towards the village of Great Finborough, in Suffolk. I park on a sleepy road adjacent to St Andrew's Church. Back in 1978 when I was at school, I was still into disco and pop music. Ackers mentioned a late-night DJ on Radio One called John Peel was worth a listen - it was a life-changing moment in my childhood.

John Peel died in 2004 at the age of 65 years old from a heart attack whilst holidaying in Peru. He was laid to rest in the village churchyard. On his gravestone are the words "Teenage dreams so hard to beat, lyrics from The Undertones classic 'Teenage Kicks.' 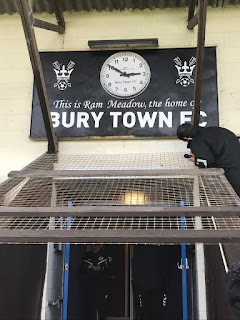 I stick the car in a long stay car park right outside Ram Meadow - home of Bury Town. We head into town for a spot of lunch at the Mason Arms - and very nice it is too. Ackers eats like a horse.

Bury St Edmunds is a historic market town in Suffolk with a population of 40,000. It is known for brewing and malting (Greene King Brewery) and for a British Sugar processing factory, where Silver Spoon sugar is produced. On the 3rd March 1974 a Turkish airline jet crashed shortly after take-off, killing all 346 people on board. Among the dead were eighteen members of the Bury St Edmunds Rugby Club who had been watch and play rugby in France. There are two memorial stones in the area to remember those who passed away in the tragedy. 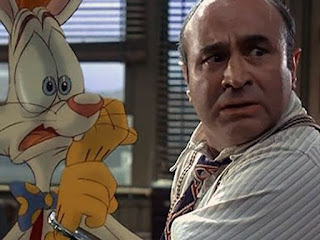 The town's main football team, Bury Town, were founded in 1872 and are the fourth oldest Non League team in England. English actor Bob Hoskins was born in the town. He appeared in many well-known films including: The Long Good Friday, Mona Lisa and Who Framed Roger Rabbit. 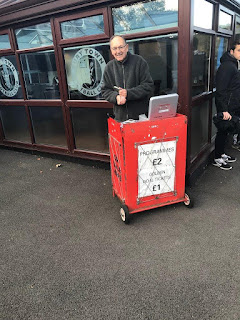 It's £9 on the gate and £1 for a golden goal ticket. The ground is a snorter and has been on the hit list for a while. I love the unusual stand with it's angled roof. There is plenty of cover, which isn't required today with clear blue skies; albeit a tad chilly. 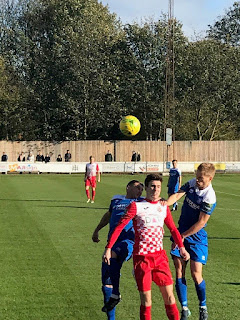 Tilbury, from neighbouring Essex, are today's visitors. The DJ just seems to be playing what he likes - without consultation from Danny Cowley. The first half is lacklustre with hardly any goalmouth action. The most exciting thing to happen is to see the smoke billowing and drifting across the ground from the nearby sugar factory. Bury play a nice passing game but lack any nous in the final third to exploit a defence that is there for the taking. Tilbury are reduced to ten men after a scene of handbags that TOWIE would be proud of. 'The Big GC' (Gemma Collins) would pack a bigger punch.

Bury take advantage in the second half scoring three fine goals. The second one, in particular, is worth the gate money. Ten-man Tilbury plug away but don't get a goal their efforts deserve. 'The Lincoln' have had a miserable time of it 40 miles down the road in Colchester - I saw that one coming a mile off.

Man of the Match: Ackers
Posted by Sticky at 7:15 PM