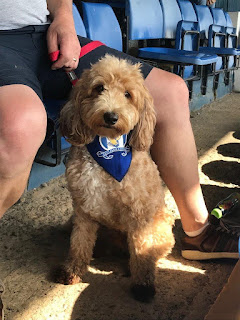 It's Sunday afternoon and I'm slouched in a Chesterfield leather armchair in the window of the wonderful Embankment pub in 'North Bridgford', scrutinizing the Non-League Paper, whilst poring over a pint of Elsie Mo from the Castle Rock Brewery. Ironically, 'Love Will Tear Us Apart', by Joy Division, is on the pub jukey. Hearts have been shattered and broken over the road at Notts County's Meadow Lane. The big love-in between Pies' owner Alan Hardy and 'future England manager' Kevin Nolan has come to an abrupt and sorrowful parting of the ways. Furthermore, there seems to be unrest in the boardroom with the immediate resignation of Nolan's drinking buddy, Non-Executive Director, Jon Enever, who churlishly announces it on his Twitter account. Vice Chairman, Darren Fletcher, the Five Live and BT football commentator, has also taken down any association with the World's oldest Football League Club from his Twitter profile.

The pub doors swing open and in waltzes an unshaven Charlie Slater from BBC East Midlands Today - probably called into action on his day off. He scouts the pub looking for folk to interview, to seek opinion and get a reaction. Customers shy away and politely decline to 'say a few words.' His eyes meet mine. "Mate, don't suppose you'd like to say a few words?" "No problem", I reply, "We're Lincoln City, we're top of the League." Slater shakes his head, about-turns and returns to his camera crew waiting patiently on Arkwright Street. 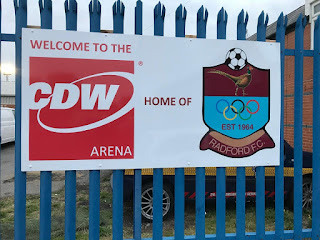 Bank Holiday Monday is spent up in County Durham at Spennymoor Town's glorious Brewery Field. I pay £1 for a bag of liquorice allsorts at a sweetie stall and stand on the raised terrace as Moors batter an out-of-sorts F.C. United of  Manchester 2-0 - their player-manager, Tom Greaves, walks a few days later. It just leaves me with Hereford FC to tick off in the National League North to complete the set - that's right, Hereford is proper oop North innit .. lol.

On Tuesday evening I witness a 2-2 thriller at Radford FC's Selhurst Street with Mr and Mrs John Harris and their daughter, Lucy, for company. Wednesday is spent at the World- famous Clifton All Whites watching my two lads play for their village team. They lose 5-3, but both get 90 minutes in the bank. I love to see my eldest lad taking people on. He's an old-fashioned winger with the fastest feet in south Notts; but needs to work on his tracking back and general fitness. 'Our Joe' is back in Leeds at Uni soon, for his final year, so I guess football isn't on his list of priorities. 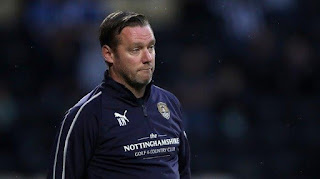 Ms Moon and I enjoy tea at The Railway in Lowdham on Thursday evening. I make the short journey to Arnold Town's ground on Friday to see Gedling Southbank and Keyworth United draw in a six-goal thriller. The Green Army (players and supporters) seem to think the game is won before a ball has been kicked. The Taxman rocks up 20 minutes into the game, escaping the £2 admission charge. Is it a general rule of thumb to charge for an NSL game? Keyworth only spend five minutes in the changing room at half-time, following a lethargic and inept 'performance.' Young Sam Foster and seasoned campaigner Scott Litchfield come out of the game with their heads held high.

Ms Moon misses out on the trip up to Bradford due to holiday shopping and ironing (I do my own before all you Loose Women viewers pile in). The Big Man is drafted in after passing a late fitness test following a 48-hour stomach bug. I try to not to mention that the game is close to the 'Emmerdale Farm Experience' in Leeds - he hasn't missed an episode in over 30 years. 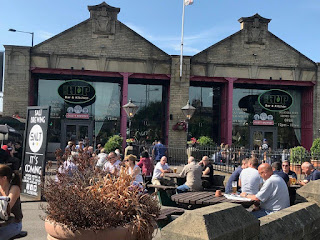 Within a few hours we're parked up at The Hop in the village of Saltaire. It's an old, converted tram shed with a two-tiered bar. Tourists and locals are in the beer garden basking in the late summer sunshine. The Big Man treats me to lunch and a pint of Silver King from the superb Ossett Brewery. He demolishes two brisket-wrapped in Yorkshire Puddings. There's nothing on the jukey; it's been replaced by Leicester City and Liverpool. The Foxes are 2-0 down; Trumpy Bolton will be drowning his sorrows on an all day sesh in Worcestershire.

Having made good time, we pop down to the Salt Mills. Saltaire is a Victorian model village located in Shipley. The Victorian era Salt's Mill and associated residential district located by the River Aire and Leeds and Liverpool Canal, is a designated UNESCO and World Heritage Site. Sir Titus Salt opened the woollen mills in 1853 and built the village of Saltaire to house his workers. He died in 1876. It is said that 100,000 lined the streets for his funeral. Bradford born artist David Hockney has a permanent collection of his work on display. 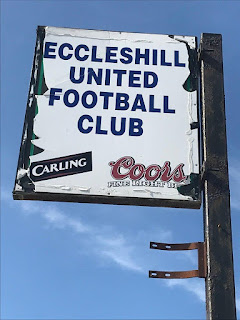 We wander down to Roberts Park and its 14 acres. It's alive, kicking and has a cricket match taking place. We only have time to watch a couple of balls. The first is despatched back over the bowler's head, clearing the perimeter rope for a straight six. The second is feathered by the batsman into the keeper's hands.

Parking is easy-peasy outside Eccleshill United's Plumpton Park ground. The Club was founded in 1948. There is evidence that it was formed before this, but was disbanded due to the Second World War. They have played here since 1963. 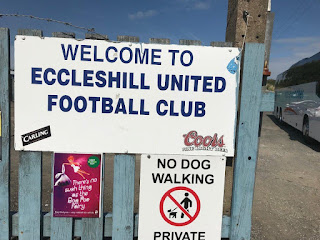 It's £5 on the gate (thanks Big Man). I grab an excellent programme for £1 and a couple of raffle tickets. A very kind official gives us the lowdown on the club, as we admire the pristine condition of the playing surface. A stray shot from the Hebburn Town warm-up grazes the top of the Big Man's head, sending his sunglasses ten yards down the terracing. Despite being smothered in sun cream we use the stand as a hidey-hole from the baking, sweltering sunshine.

It's an FA Vase cup tie, at the Mitton Group Stadium with the long journey ending at Wembley Stadium. Hebburn is situated on the south bank of the River Tyne, sandwiched between the towns of Jarrow and Gateshead. Notable people from the town include: long-distance runner Brendan Foster and footballers George 'Geordie' Armstrong and Chris Basham. 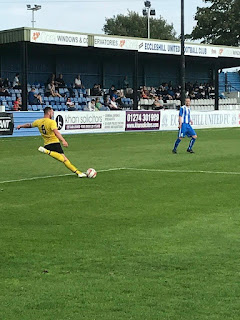 I'm sat next to Eccleshill diehard fan Marley the Cockapoo, dog. He's wide-eyed, bushy-tailed and donning his bandana. His bottom lip is quivering on 17 minutes when a cracking 50-yard cross-field ball by the visiting skipper is headed onto the crossbar, the 'keeper saves the rebound before the ball loops up for Armstrong to head Hebburn into the lead.

A large group of kids from a junior football team have added to the ambience and atmosphere with their chanting and clapping. Unfortunately for the Big Man they are all in the queue at the snack bar, preventing him from a much-needed full fat Coca-Cola. Sticky Palms ventures into the social club, where one or two visiting fans are worse for wear - not as bad as Corbridge-born Aston Villa manager Steve Bruce must be feeling right now, whose team are 4-0 down at Sheffield Utd.

Eccleshill huff and puff but fail to blow the house down in the second half as the visitors put all the men behind the ball. The final whistle is blown, poor old Marley looks down in the dumps and off his food. I daren't look him in the eye.

Man of the Match: Marley and Charlie Slater the TV reporter.
Posted by Sticky at 7:36 PM