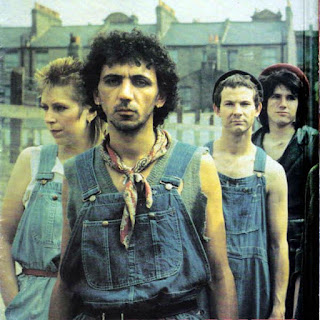 It's 10:30am on Sunday morning and I'm lurking about on Fox Road, outside the Larwood and Voce pub - don't worry folks, it's not a secret rendezvous with blog-drinking legend Trumpy Bolton. Today is the second day of the third Test between England and India at Trent Bridge. I take my pew in the Fox Road Stand with the Bakers (thanks for the ticket Rob) and 'Barthez.'

India have racked up 329 runs. England's reply is a pitiful and pathetic 161 - narrowly avoiding the follow-on thanks to a quick-fire 39 runs from a hard-hitting Jos Buttler (he's only 27 years old and seems to have been on the scene for years) I actually get confused on whether I'm watching England or Nottinghamshire CCC bat; both are as equally incompetent with willow in hand. England are rolled out in two and a half hours. 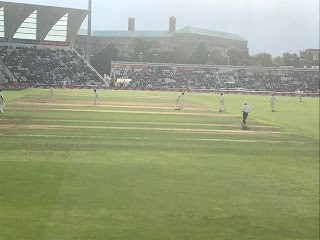 I wave the lads off and saunter up London Road towards the Fox and Grapes in the 'Creative Quarter.' I was going to have a swift one, but I might miss Songs of Praise, and besides, I've had enough 'Irish Champagne' to sink a battleship. I'm still feeling the after-effects of a late YouTube session with 'Taggart' last night. I'm tucked up in bed by ten bells after a superb Sunday roast dished up and cooked by Ms Moon. The highlight of the week is Aggers reading out a tweet I sent into Test Match Special saying I've had 50p on Graeme Swann to win Strictly Come Dancing at 25/1. Swann says he'll go halves with me, as I should be able to get four pints of beer for £12.50 in Carlton - the cheeky sod, unless I'm tooled up with 'Spoons vouchers.

On Tuesday evening I have a chippy tea on Rookery Lane in Lincoln. It's my first viewing of the Imps this season. They've made a steady enough start without setting the house on fire. I take my usual seat in the Selenity Stand - I've not seen them lose when I've been housed up here for the last 20 games I've watched. Our talisman skipper, Alex Woodyard, has jumped ship and done a runner to nasty Steve Evans' Peterborough United. We miss his legs, leadership and energy, as Bury give us the runaround in the first half; taking a deserved 1-0 lead into the break. 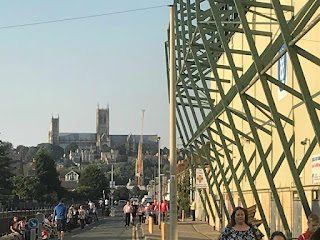 The only thing that has cheered me up at Sincil Bank this evening is a supporter's playlist booming out of the speakers prior to the game. He's picked some cracking tunes including,  The White Stripes and Stone Roses.

Danny Cowley tinkers with his starting line up and makes a tactical change in the second half; it's a managerial masterstroke. Big John Akinde strokes home a penalty, with 'one of our own', Lee Frecklington scoring a late winner which has me dancing in the aisles with joy. My unbeaten run in the Selenity continues. 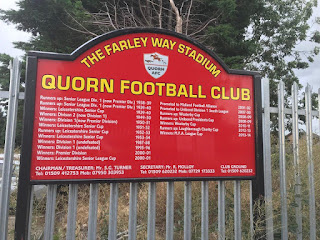 I witness an exciting finish, the following evening, at Quorn's Farley Way, in Leicestershire, shared with good friends from Shepshed Dynamo, including Chairman Mick Sloan, Big Sean and White Van Man. Dynamo are 2-1 up with seconds remaining when Quorn have a goal chalked-off after a second opinion by the referee's assistant. The victory is fully deserved and it's great to see the beaming ear-to-ear smiles on the faces of folk from Shepshed.

The weekend starts late for Sticky Palms as I have a conference call with clients in New York - I'm gutted to miss Emmerdale Farm. In hindsight, I should have watched a re-run of Amos, Mr Wilkes and Seth, rather than watching the dire football dished up by Middlesbrough and WBA in an overrated Championship. An out-of-favour Craig Dawson is on the bench for WBA. He was discovered by Bernard Manning junior playing parks' football in Rochdale on a Sunday morning, whilst being a glass collector at the Dog and Partridge pub in the town. 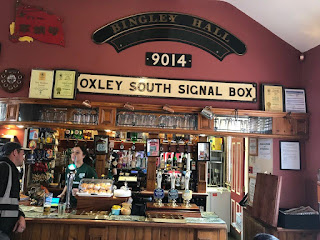 I love how football comes together in someone's hour of need. 'Forza Garibaldi', a Nottingham Forest supporter driven movement, has sent out an SOS to folk that HOPE, a Nottingham Christian organisation, are appealing for food bank donations, as emergency supplies are running low. I clock this on Jitz Jani's Facebook feed. Ms Moon kindly shoots over the road to Tesco Carlton on Saturday morning, to jam pack a couple of bags of Red Alert items. We drop them off at the Trent Navigation pub, on Meadow Lane, adjacent to Big Alan Hardy's Notts County ground. Today they are playing an in-form Lincoln City - I would seriously have a cardiac arrest if I attended that game, so give it the swerve and head towards the Black Country in Wolverhampton for FA Cup action.

The Bank Holiday traffic is a blooming nightmare. Sat Nav is having a dicky fit down the A453. Five Live are reporting that some poor soul is threatening to jump off a bridge on the M6 and there is a 90-minute delay between junctions 8 - 10 on the M42. We jump off onto the A5 and skirt around the back of Tamworth. 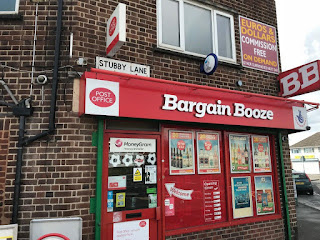 Sticky Palms has a cracking Good Pub Guide entry lined-up in the sleepy village of Codsall in Staffordshire, where the broadcaster and presenter Jacqui Oatley MBE was brought up. There's a beer festival being held at Codsall Station as we roll into the car park. I'm not too chuffed that there's no food on today, just a burger van outside the pub. A cracking pint of Hereford Pale Ale makes up for the disappointment of no snap.

Ms Moon slams the brakes on halfway down Stubby Lane, just outside Bargain Booze. I dash across the road and take a snap of the street sign, with bemused onlookers giving me the odd eyes. Flawed genius Kevin Rowland, the frontman of Dexys Midnight Runners, lived on this road as a kid. Wednesfield is two miles outside Wolverhampton with a population of 22,000. 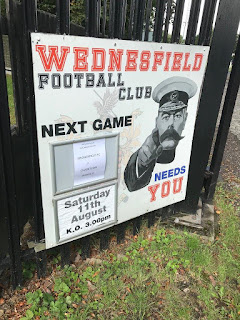 We park outside an old people's complex just off Amos Lane and take a short stroll to the turnstile. It's £7 entry and £1 for a programme. I'm up for banter on the gate; the chap clearly isn't. We're both 'Hank Marvin' - the snack bar is just opening up for trade. Two small hot dogs and a tray of chips are served up by a cheery lady for £5.50.

We chance upon a couple of 'Northern exiles' from Darlington who are Chasetown followers. The Scholars are winless this season and they are cautious and nervous about this afternoon's outcome. Wednesfield are two steps below Chasetown, they play with freedom, confidence and desire. 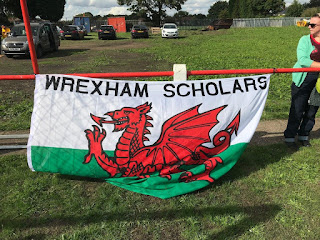 Ms Moon and I hook up with 'Blackpool Jane' who is Matchday Secretary with Chasetown. Jane has seen Blackpool play at an astonishing 90 League grounds - she just has West Ham's new ground and The Lawn at Forest Green to chalk off, to complete the set. Jane is concerned that the visitors only started their season last week, so a lack of game time may hinder their progress.

Blimey Charlie, Wednesfield look hungry; particularly wing wizard 'Harry' with his mazy runs and silky skills. In contrast, Chasetown have little to offer and it's no surprise that they go a goal down following a smart finish by Pond. 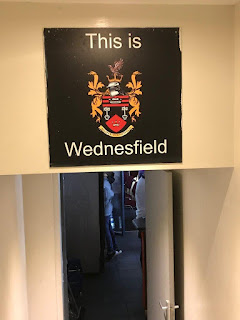 Chasetown lack leaders and play without heart. They are fortunate to go into the break with just one goal separating the sides, after a glaring miss by the bald-headed Ben Wilkins. Ms Moon and I have a sugar rush. I take a stroll across to the social club to grab a bar of chocolate; the place is heaving with folk. I return empty-handed; the Princess has the face on.

Jane has positioned herself next to the visitor's dugout so she can accurately write down the substitutions for the FA match report she has to submit. Chasetown restore parity with a brilliant finish by Jacob Lovatt, who has put in a performance worthy of a place in the Chasetown Amateur Dramatic Society, with his rolling around and theatrics. They take a 2-1 lead and look to be cruising into the next round with a £2,890 winning cheque. 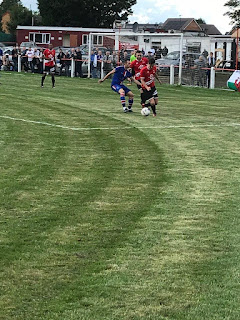 A melee ensues following a bad challenge just outside the area. I've seen more handbags at Harvey Nicks. Wednesfield's 4 jacket is churlish and cowardly, as he runs 15 yards to push an opponent over, before hiding on the touchline. The referee correctly brandishes a Red card. The 9 jacket for Chasetown is a lucky lad to only see a Yellow waved in his face.

It's getting tasty where we're stood. A gang of sewer-mouthed youths appear from nowhere and start hurling abuse at the Ref's assistant, as does a track-suited Wednesbury official. Incredibly the Cottagers equalise to force a replay that they certainly deserve.

Man of the Match: Forza Garibaldi
Posted by Sticky at 7:50 PM