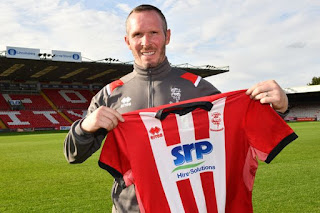 It's Monday 9th September and I'm slouched in my swivel chair at Ideagen PLC HQ, basking in the glory of being League leader in the Ideagen Super 6. A youth taps me on the shoulder ('Our Joe') and says "Dad, have you heard the news? Danny Cowley has upped sticks and left 'The Lincoln' to join Huddersfield Town."  I gasp for air and nearly tip the chair up. I rummage around in my rucksack and pop a couple of blood pressure pills. I ask for the air con to be turned on. I loosen a button on the collar of my shirt and ask for a glass of water to brought over to me. Joe checks to see which qualified first-aiders are at work today. The list is on the kitchen wall.

How could he do this to us? They say it's best to leave when your stock is high. Sanctions are put in place in the office. Anyone who mentions his name has to put £1 in the charity pot. If I have a slip of the tongue, then it's a Bluey for me. Danny is now known as 'He Who Must Not Be Named.' 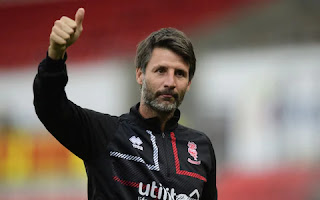 Seriously, what an unbelievable three-year journey the Imps have had under his stewardship. I emailed Danny Cowley not long after he arrived at Sincil Bank, aware of his Non-League background and his eye for a bargain buy. At the time there was no scouting system in place as such; so cash-strapped were Lincoln that they didn't even have a First Team coach or Chief Scout.

I offered to scout the Non-League for my Club as I've previous experience as Head of Recruitment at Notts County Academy. Tickets were arranged by Danny, and each Saturday evening I sent in detailed reports of potential targets. This became harder as we climbed the leagues as the Imps recruitment went for quality over quantity. But it was an honour to be associated, if only in a cameo role. I wish The Cowleys well at The Terriers of Huddersfield and hope to blog a game up there later in the season. 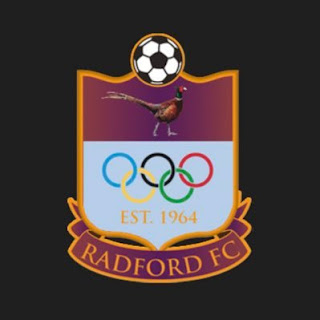 I sneak a couple of games in during the week. I have an amusing anecdote to tell you from one. On Tuesday I watch Radford FC v Clifton All Whites - I'm big mates with both of their managers and a few of the players. Scott Litchfield and Jack Reid are on opposite sides and the best of mates. Jack has hitched a lift with Scott to the game and will be marking his buddy this evening. About 20 mins in, there's a foot up by Litchfield; there's no intent, he went for the ball. Reid's a brave lad and plays with his heart on his sleeve, he sticks his head in. Claret falls from the wound onto the famous white shirt. It's an accident with no malice intended. The referee sees differently and shows a straight Red to a disbelieving Litchfield. The irony is that Scott was with Jack down the QMC accident and emergency department until the small wee hours. Let's hope common sense prevails and the appeal is successful.

It's Friday morning and Sticky is like a kid on Christmas Eve. Ms Moon is off for the week to Tenerife with family and her best pal Jill. I've got carte blanche on the football front. Lancashire Police have requested Lincoln fans leave early as the World Firework Championships are on in Blackpool and the roads into the resort are expected to be choc-a-bloc. The game's been moved to Friday because Preston are playing at Deepdale on Saturday and the Constabulary can't police both games - what a load of poppycock. 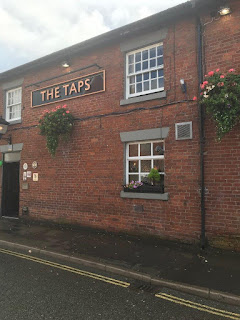 The driving conditions are atrocious on the M6 and so is the Jim White Show on TalkSport. 'Terry the Gardener' live from his allotment in Merthyr Tydfil, South Wales, on the Jeremy Vine Show, is far more heart-warming.

I arrive to a monsoon in the coastal town of Lytham where I've set up basecamp for the night at the Innkeeper's Lodge (the County Hotel in old money). I grab a sandwich from Sainsbury's before ticking off The Taps, a Good Pub Guide entry. I quaff a pint of Robinson's dizzy blonde and then stretch my legs on a windswept seafront. 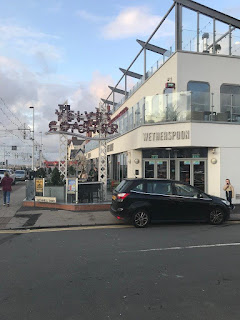 I run for the 68 bus to Blackpool, oblivious to a large area of standing water. A car comes careering down the road and aquaplanes into the 'puddle' drenching Sticky Palms from head to toe. The CCTV lads will be in stitches. I troop back to the hotel for a change of clothes, smelling like a wet, old dog. I've only brought one pair of jeans. I blast them for half an hour with a hairdryer.

Take two is successful. I jump on the No.11 and pay £2.90. I alight the bus in the town centre and head for the front. I can't dress up what I see. The place is dying on its backside. There's something tragically romantic about it. My good friend Mr John Harris has tipped me another winner in the Velvet Coaster a three-storey Wetherspoons. I sit on the rooftop terrace and watch the sun go down with a couple of pints of Moorhouses Blonde Witch at £2.09 per pint. Blog regular and pub snob, Tony 'Dog' MacDonald, slaughters 'Spoons on social media (love ya Tony). 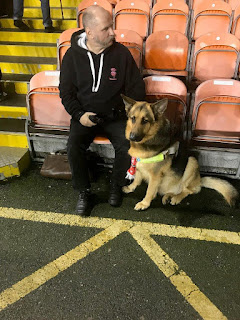 A couple of drunks point me in the wrong direction towards the ground (been before, memory like a sieve). I saw Dexter Blacklock bag a late equaliser for the Tricky Trees back in October 2012. Jermaine Jenas gave a jaw-dropping display that evening; a proper midfield masterclass.

'The Lincoln' have brought 1200 supporters despite one win in the last nine outings. It includes a German Shepherd dog who is being fussed by his partially sighted owner. David Bowie's Starman is on the PA system. Blackpool supporters start to fill up the stands behind both goals. The atmosphere is electric and noisier than those chuffing fireworks that are being set off up the road. Lincoln sing to the new manager 'Michael Appleton' to the tune of  'Give it Up' by KC and the Sunshine Band. 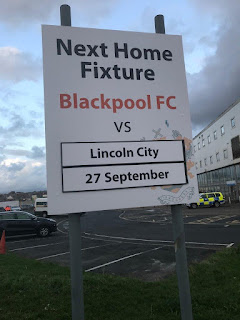 The Imps start like a house on fire. Tyler Walker sees a shot go wide. We fall behind 15 minutes in after an unstoppable strike from Sean Scannell. The game is breathtaking as Lincoln sweep forward again. 'The Lincoln Messi', Jack Payne, sees a shot beaten away by the Blackpool stopper. The Tangerines go 2-0 up after a misplaced pass and some sloppy defending.

'The Lincoln' claw one back with a brilliant move. Crowd favourite, Portuguese winger, Bruno Andrade, slips his mark and puts in a cross, which Payne converts. There are further chances for both sides in a pulsating first half of football. I'm gobsmacked to see the groundstaff fire up the water sprinklers at half-time. 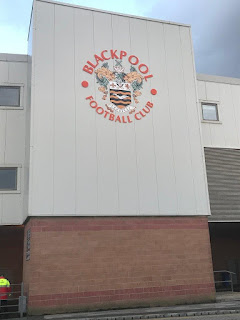 The second half doesn't live up to its billing. Blackpool fail to put the game to bed and the Imps miss late chances for a deserved equaliser. I'm sick as a dog as I jump back on the No.11 bus back into Lytham. I drown my sorrows back in The Taps. I play the game over in my mind, over and over again. I finally drop off at 3 a.m., but rise early and feel grouchy. I pull back the curtains. It's raining cats 'n dogs.

I find out over a greasy, fried breakfast that AFC Blackpool v Lower Breck has been postponed because of electrical issues - probably caused by the Noah's Ark downpour. The whole area is under water. I have other options in the area but fear they'll all be watered off. Going against the grain I head towards the Costa Del Sol (Greater Manchester) - it never rains there. 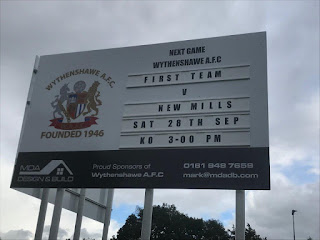 There's a spot of celebrity grave-hunting to be had first. I drive down millionaire's row before parking up in Lytham Park Cemetery and Crematorium. One of England's best joke tellers is laid to rest in here. I hunt high and low for Les Dawson but can't find him. I'm hopeless without my usual sparring partner. She's good at finding celebrity graves.

I drive down endless motorways in pouring rain towards 'Sunny Manchester.' Irlam have confirmed they are ON. They are locking up the gates as I roll up. The game is OFF. It's a similar situation at Maine Road, a downpour of biblical proportions sees another game bite the dust. 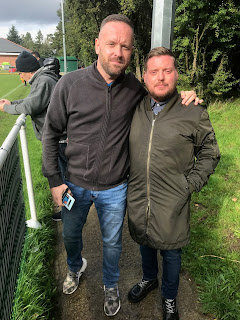 I won't do a 3G/4G for love or money. I'd rather wash the pots. The Notts FA award League finals to Clubs who have these 'surfaces.' The NSL finals were played out in sweltering temperatures last May on an artificial surface - nobody puts a tackle in and good players don't like playing on them.

There is one last roll of the dice or I'll head home to Nottingham. @nashultra1 has tweeted me to say Wythenshawe Amateurs v New Mills has passed a swimming pool inspection. I pull up there at 2:p.m, astonished to see the pitch in pristine condition. Gobsmacked and relieved, I handover £4 to a cheery gateman.

I sit in a smart, modern clubhouse drinking a J2o as TV chew over the fat after fortuitous 1-0 win for Liverpool at Bramall Lane.  The walls are adjoined with pictures of the Club's history since being formed in 1946, 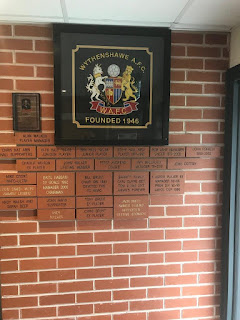 Dark black clouds circle above the ground. The studs of the players' boots squelch in the water sodden turf. The first half is as exciting as last night at Bloomfield Road. Tackles fly in on the greasy surface. No quarter is given. The Grandson of Manchester Utd legend Paddy Crerand is stroking the ball with his left foot in the middle of the park.

I get gassing to Secretary, Mike, who has recently taken over the role. Committee member Arron is also very friendly. Winless New Mills, from Derbyshire, start the game at a furious pace. It's end to end, like last night. The visitors take the lead just shy of half time. Mike and Arron are gutted. 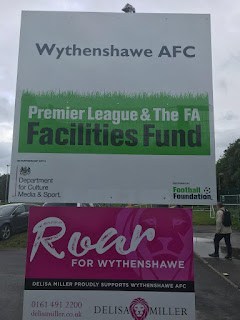 Arron comes back after half time with a plate of sandwiches, sausage rolls and a cup of tea, What a lovely gesture. Non-League folk make you feel so welcome. This game would never have been on had it not been for the efforts of the 'Ammies Ultras'  endlessly forking the pitch throughout the rain-soaked skies.

New Mills nick another from the penalty spot. It was only a few years ago that they were managed by former Manchester City striker Shaun 'feed the goat and he will score' Goater. I've had a wonderful 24 hours watching football at all levels, But it's time for bed  Zebedee.

Man of the Match: Les Dawson "My father drank so heavily, when he blew on the birthday cake he lit all the candles."
Posted by Sticky at 7:56 PM