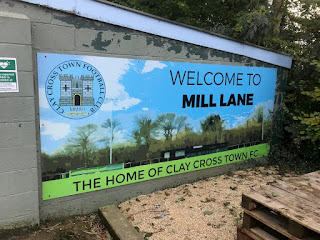 The incessant rain is frustrating the groundhopping fraternity, including Sticky Palms. I flat refuse to travel too far, particularly during the week. The thought of watching The Chase, Emmerdale Farm, Corrie, 'Celebrity' Coach Trip and 'Celebrity' MasterChef has put me on suicide watch. Talking of Emmerdale, there's been an outbreak of salmonella food poisoning - Tommy Cannon has already bitten the dust. Hotten village is in lockdown. The lads from Heartbeat have been drafted in to investigate, although PC Ventriss has been told to have his fried breakfast minus the eggs. One of Jack Sugden's hens has laid a dodgy batch of eggs. It's either that or Amos Brearley has undercooked them.

I haven't time for this twaddle as I drive south of the Trent towards my old stomping ground of Keyworth. A tasty Under 19 local derby clash between the 'Green Army' and West Bridgford is on the menu at a bitterly cold Platt Lane. The Bridgford mums will need their 'fur coats' this evening. 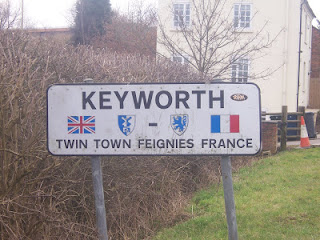 Wise to the weather, that blows in from the west and across the ground, I'm wrapped up to the ninepins. The wet and cold never used to bother me, but Father Time has finally caught up with me. I chat with Keyworth Cricket Club legend John Baldrey. In 1979 'JB' knocked the final ball out of the park for KCC in the Eddie Marshall Trophy up on the Keyworth Rec'. The Millers beat red hot favourites Southwell CC. We drank and sang long into the night, up The Salutation Inn on Main Street - well actually I didn't, as I was only 15 years old and on holiday in Cyprus.

I scouted JB's grandson, Myron. He was down The Pies until he was 16 years old, but is now in the 'States' completing a football scholarship, whilst taking a degree. His younger brother is playing for the visitors. The standard of football is high, neither team give no quarter or want to kick lumps out of one another, which is often the norm at this level. The difference between the two teams is in the final third of the pitch. Bridgford run out 3-0 winners. 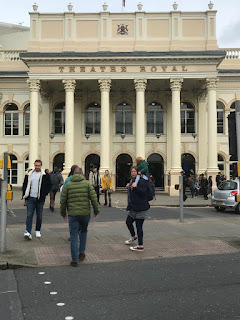 Both youth policies are in rude health. Keyworth will only go from strength to strength as their young guns are integrated into the First Team under the watchful eye of local manager Ian Marley. There's talk of a 4G surface down 'The Theatre of Dreams.' I may have to do a Friends of the Earth job and chain myself to the goal post (the one nearest the bar) before a JCB excavator rips up the first sod of turf  - Sticky doesn't do 3G or 4G.

I spend the second half gassing to staunch Barnsley fan Roger Wilson. His lad, Tom, comes off the bench. I chucked him into Men's football, at the age of 16 years old last season, after being tipped off about him by KUFC Development Officer, Mark Ritchie; he wasn't fazed one iota, and more than held his own. I would have played him earlier, but had to wait for his 16th birthday. I called him 'The Keyworth Cruyff.'  I look forward to following the under 19s and hopefully the return of the Development Team next season too. 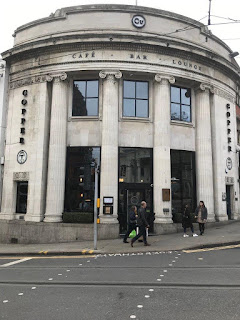 I spend the next few evenings listening to the pitter-patter of rain on the French windows. I tune into the excellent 'Undr The Cosh' podcast show that is hosted by former footballers Jon 'The Beast' Parkin and Chris Brown. Ex-Arsenal and Nottingham Forest striker, Kevin Campbell, is the latest guest. He tells a couple of cracking anecdotes about the two occasions he met Brian Clough and seems all-round good egg

I read late into the night on both Wednesday and Thursday. Keyworth lad, Duncan Hamilton, is one of my favourite authors. My father trained him up to take shorthand when he was a rookie reporter on the Nottingham Evening Post in the 1970s. He wrote one of the best books about Brian Clough that you are ever likely to read. It was titled 'Provided You Don't Kiss Me.' It's a must-read for any football fan out there. It follows Hamilton's 20 years reporting on the Tricky Trees for the local rag. Clough is so taken with Hamilton that he invites his family round for Sunday lunch at his home in Quarndon, near Derby, the day after he retired from NFFC. 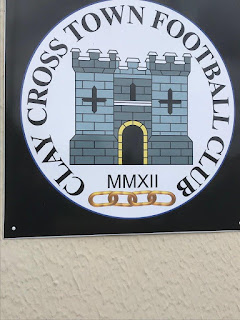 I've got the car booked in at Kwik Fit on Huntingdon Street, first thing on Saturday morning. I ask Ms Moon if she fancies breakfast and some retail therapy. We drop the car off and wander around the back of the Victoria Centre before joining Lower Parliament Street, an area sadly renowned for stabbings of late.

We drink coffee and enjoy a full English breakfast in a window seat at Copper Cafe on Market Street. Back in the day (the 1980s) it was packed to the rafters and called Cafe Royale. 'Chopper Harris' walks by and gives us a wave. More on him in four weeks' time when we're on the lash in Tenerife for 7 nights. 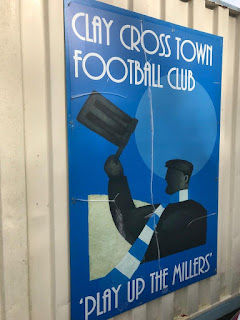 A couple of winter coats and a pair of jeans are bought before picking the car up and driving out towards Derbyshire. Paul Gambaccini is playing tracks from the best albums of the 21st Century. The first three tracks are by Sam Smith, Scissor Sisters and Lady Ga Ga. I ask Ms Moon if the Graham Norton Show has been extended.

We drive over the hilltops admiring the stunning views of the Derbyshire countryside. It's my second visit to Clay Cross Town FC. I first came in 2013 when I was impressed with the facilities and the friendliness of folk. I clock the old winding wheel from Parkhouse Colliery on the main road that closed in 1969. There's the memorial to the many miners that lost their lives, two thousand feet underground. Forty-five men perished after an explosion in 1882. The Labour politician, Dennis Skinner, better known as 'The Beast of Bolsover' was born in the village. 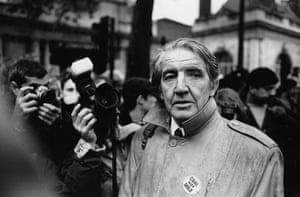 I remember walking up a deserted High Street six years ago, unable to fathom out why a lot of shops were boarded up or in disrepair. It became pretty apparent why, when coming into full view of the Tesco Superstore which was part of a £22 million redevelopment. It's killed the town centre stone dead. Some would also say that it's brought employment to the area. Either way, there's no 'Meal Deal' for Ms Moon and Sticky Palms as we're still podged from the Copper breakfast.

It's a short walk down Mill Lane to the ground. Ms Moon has arranged to meet a friend, Lois, whose son is one of the mascots today. I leave them having a catch-up, so I can take a few snaps. It's £3 on the gate which is great value for a first-round FA Vase tie. There are no concerns about the playing surface which looks immaculate. Clay Cross's groundsman has won many awards and accolades over the years. I engage in conversation with a photographer who has travelled all the way down from Blackpool. He's another 'Proper Hopper' who has visited over 2000 grounds. 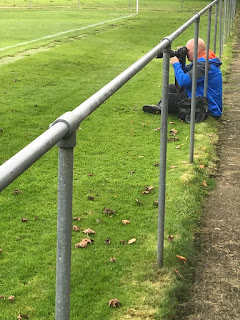 Clay Cross are the stronger team in the first half. The Vase draw has been unkind to the visitors from Rutland, England's smallest county. They have overcome adversity in being drawn away in the previous two rounds at Harrowby and Sticky's favourites Radford. Apparently, Big Glenn was in a filthy mood that day, launching his baseball cap 40 yards down the touchline as the goals flew into the Radford net.

Cottesmore look nervous from the off. Clearances are hurried and passes are misplaced. 'Scully' is the Millers' grand fromage (well he thinks he is). He's been off the radar with a couple of skew-whiff long-range attempts at goal, but opens the scoring at the back stick with a simple finish. 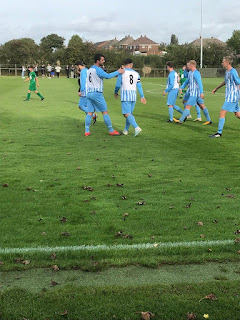 I'm soon scurrying into the bushes for an alehouse clearance. I retrieve the ball and toss it back to the Cottesmore full-back. Both Ms Moon and I take note that he says thank you. They are a very polite set of lads, including the subs who are always up for a chat.

A Cottesmore fan, adjacent to me, has moaned and whined at the referee's decisions throughout the course of the first half. I try to reason with him, but he's having none of it. Ms Moon says I'm best backing off as he looks a bit like Grant Mitchell of EastEnders. 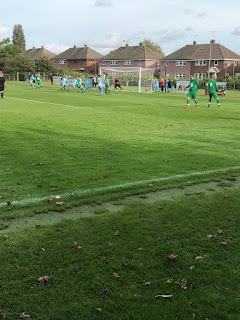 We have a coffee, tea and a couple of chocolate bars at the break. The 50/50 draw is announced. The lucky winner is in for a £65 windfall. My winless run continues - I'm 15 numbers off the prize. Cottesmore pick up the pace in the second half and restore parity with a brilliant goal following great work by the right full-back, who nutmegs his opponent before delivering a worldy cross.

Their joy turns to despair minutes later with an outrageous finish from the outside of the boot by 'Jack the Lad' 'Scully.' Cottesmore have little left in the tank. Clay Cross add a third goal at the death, with the scorer jumping into committee member 'Nobby's' arms. It's a wonderful moment to end an entertaining afternoon. I look forward to the second round draw and hope to be there. 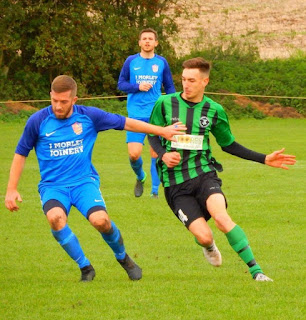 NB: Breaking news emerges from Bingham Town's ground (by text) that 'The Keyworth Georgie Best (my lad) has scored with a 30-yard howitzer of a shot. I'm as pleased as punch for him, as he's had it a bit rough of late.

Man of the Match: Adam Kimberley (love his jinking runs)

Attendance: 220 (Great turnout from both sets of fans)