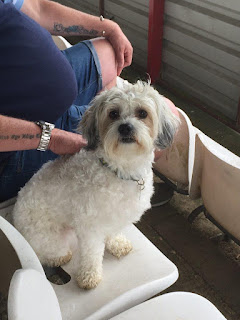 It's Tuesday 11th July and way past my bedtime. I'm slouching on the sofa, channel hopping. I chance upon a real-life drama on BBC One called 'Murdered For Being Different.' It's a true account of the brutal and senseless murder of 20-year-old Goth, Sophie Lancaster, who was walking through Stubbylee Park, in Bacup, Lancashire, with her boyfriend Robert, when they were attacked by a gang of youths. It's a brilliant, heartbreaking screenplay which leaves a lump in my throat and tear in my eye.

A few scenes are filmed at the local football club, Bacup Borough, which I had hoped to visit this season. It looks a beautiful ground with sweeping views of the Pennines. I notice they are at home versus Hoddesdon Town from Hertfordshire on July 22nd. It seems an odd fixture, as it's a 450 mile round trip for the visitors - unless they're up for a night in Blackpool after the game. I fancy the trip so I can pay my respects to Sophie Lancaster. I'm gutted to read, the following week, that the Bacup v Hoddesdon is OFF, 'due to circumstances out of their (Hoddesdon's) control.' I reach out for the Non-League paper to peruse for another fixture. We'll be up at Bacup before rain sets in for winter. 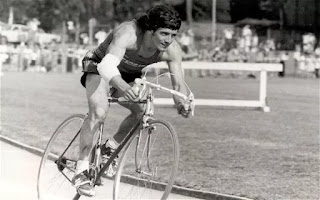 I'm back into the swing of things after the sojourn to Nerja. I have a scoop on Sunday lunchtime with Clifton All-Whites legendary manager James 'Tosh' Turner at the Brewhouse and Kitchen, situated on the banks of the River Trent in 'North Bridgford.' Tosh is convalescing after being unseated from his bicycle recently - it was reminiscent of Kevin Keegan's crash in Superstars. I view his NSL champions on Tuesday evening at Green Lane as they give a youthful Heanor Town a good hiding. I also bump into Roberto and 'Swiss Tony.'

Notts County entertain Nottingham Forest at Meadow Lane on Wednesday evening. There's a feel-good-factor on both sides of the river, with sensible business plans in place after tumultuous times under Ray Trew and Fawaz Al Hasawi. Tricky Tree manager, Mark Warburton, is recruiting heavily from North of the border, having spent two seasons at Rangers. Recent signing, Jason Cummings, from Hibernian, is skew-whiff with his shooting. Most of his efforts are fished out of the nearby Nottingham Canal. Forest's class finally tells as they run out 2-0 winners. 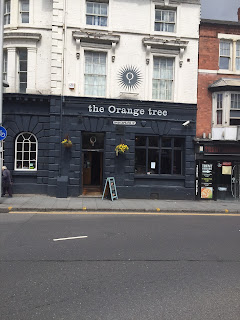 Thursday is spent in West Bromwich, followed by an overnight stay in a Premier Inn on a soulless industrial estate on the outskirts of Malvern, where the composer Edward Elgar was born. Did you know he was a Wolverhampton Wanderers supporter, and wrote 'Land of Hope and Glory?'

I'm fagged out by the time I pitch up back in Colwick at Friday tea-time after a testing journey from Leominster, Herefordshire. I was set fair for a trip to Trent Bridge where Notts and Derbyshire are teeing off at 6:30pm in the T20. We decide on a quiet couple of drinky poos at Lilly Langtry's and the Orange Tree, close to Nottingham Trent University, before retiring to bed.

Ms Moon has been banging on and on and on about a car boot sale this Sunday across the road at Nottingham Racecourse. You'll never see me or involve 'Fat Lad' Sticky Palms at one of those gigs. The good lady misses the team bus to Rothwell as she prepares her heap of junk. We manage to shoehorn time in for breakfast before my departure. I park up in West Bridgford Library. We walk hand in hand down 'The Avenue' before diving into Gusto (the artist previously known as the Monkey Tree). 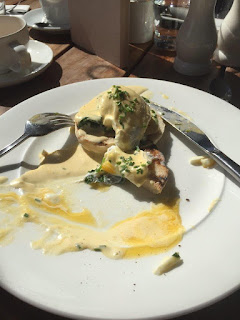 I'm a 'North Bridgford' lad, so don't enjoy being on enemy territory. I'm not a big fan of West Bridgford and its pomp and ceremony. There's not a decent pub on the strip (the glorious Stratford Haven is on a side road, cast aside like the black sheep of the family. We eat Al Fresco, basking in the late morning sunshine at a prime people-watching spot. Ms Moon has a full English, whilst Sticky throws himself into West Bridgford pretentious mode with eggs Benedict Florentine .... (in North Bridgford we call it poached eggs on toast with a tin of spinach). We skidaddle before Bridgford folk rock up with kids called Tarquin, Darcy and Rupert.

I knock up a Chilli in the kitchen whilst listening to Colin Murray interview former Newcastle United flying winger hellraiser Keith Gillespie. By the time I jump into the car the brilliant John Inverdale (Lincoln City fan) is broadcasting from the 146th British Open at Royal Birkdale in Southport. I'm rooting for Jordan Spieth after having a life-changing 50p double bet on him winning The Open and Chris 'n 'Liv being crowned King and Queen on Love Island. Rory McIlroy is out on the course after an early tee-off time - it's good to see he hasn't overlaid. 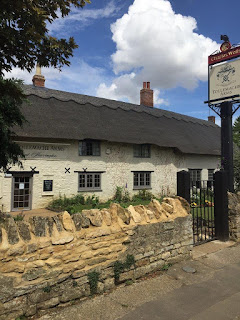 Five Live suddenly switch attention to the Tour De France. I'm not listening to that rubbish - British cycling is under scrutiny for doping, cheating and bullying. It gets worse, Radio 2 are playing Sunny by TLC; it's not a patch on Boney M's version.

I open up the Ford Mondeo Titanium on the M1 before exiting down the A14. I've picked out a thatched-roofed pub in the sleepy village of Harrington. The Tollemarche Arms doesn't flatter to deceive. The place is packed to the rafters as there is a beer festival on. I grab a pint of Hot Dog IPA, but swerve the goat burgers that are sizzling on the BBQ. 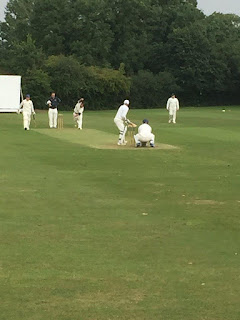 Jesus wept, it's almost impossible to park at Rothwell Corinthians ground. After circumnavigating the joint for 15 minutes, I roll into the local cricket club. A left arm bowler is steaming into bowl as I get out of the car. He clocks the non-striking batsman is too far up the wicket and whips off the bails before he has bowled. The umpire issues a warning; blimey it's feisty.

I get chatting to a lovely old fella who used to help former Leicester City and Notts County defender Nicky Platenauer when he was manager at the now defunct Rothwell Town. I mention I'm going to football and can't find a parking space. The guy very kindly points me in the direction of his house and tells me to park behind his car. 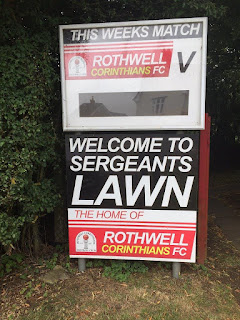 I walk up a slabbed pathway and pay £3 on the gate to a cheery chap. The ground is later described by a supporter as 'work in progress.' The clubhouse is behind the nearest goal with red-painted stands and white tip up seats on both sides of the ground.

Black clouds are looming as I position myself next to the Soham dugout. The pitch has bare patches down both flanks, where the surface looks bumpy. Soham are in control from the first whistle. Their players look leaner, trimmer and more athletic - they play a league above. 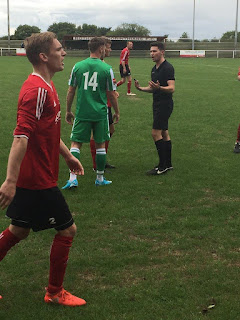 After a few close shaves they take the lead with a wonderful move that is finished with a daisy cutter into the bottom right-hand corner from 'Browny.'  The 'Magic Moment' of the first half is on the half hour. An alehouse clearance from a Rothwell defender is heading in Sticky's direction, I dangle out my size 10  black £39.99 Dolcis right shoe and coolly cushion the ball back into play. It will be etched, forever, in the memory of the 39 folk who have bothered to turn up.

I hook up with Bertie the Shihtzu Poodle at the break; he's soaking wet and not happy with Rothwell's performance. I'm allowed a photo for @nonleaguedogs, but not without the odd growl or two.
Soham turn up the gas in the second half, bagging a further two goals before the final whistle.

Man of the Match: Bertie
Posted by Sticky at 7:43 PM